Sand-dredging is big business, especially in Asia, where demand has sky-rocketed thanks to the booming construction industry. Rod Harbinson reports from Cambodia on an extractive industry that is mired in corruption and scandal, and meets some of those on the frontline of the fight against it. 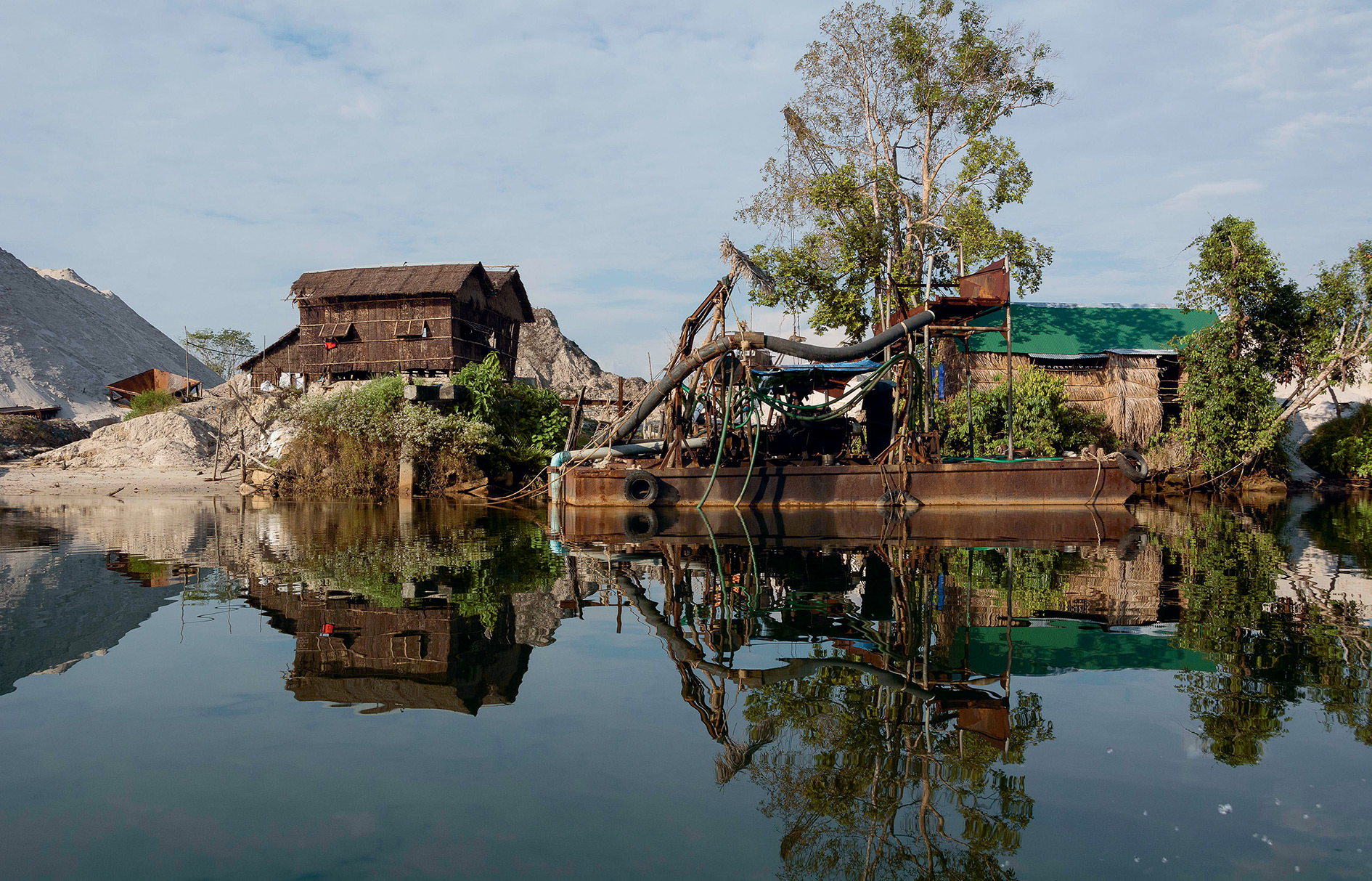 The sleepy fishing village of Koh Sralao, situated on a small island in a mangrove-lined estuary, is in the frontline of the resistance against rampant sand-dredging.
Photo: Rod Harbinson / RodHarbinson.com

‘Sweetheart Island is the only place we can fish for crab now. Many islands have been lost to the sand-dredging already,’ said fisher Lim Lon. With its houses on stilts strung out over the water, the isolated village of Koh Sralao in Cambodia’s southwest Koh Kong Province is far from the tranquil backwater that it might appear at first sight. It is at the forefront of a movement to halt the sand-dredging which, since 2007, has blighted this and many other communities along Cambodia’s rivers and coastline.

As our fishing boat sailed upriver through an abandoned dredging site, the mangroves lay fallen and dying where the river bank had collapsed. A farmer complained that his riverside fields had receded 20 metres from erosion since the arrival of the dredgers.

‘Before the dredging, the water was only two metres [deep] or less, and in some places there were sand banks, but now the water is at least five metres and some places eight,’ explained another fisher, Phen Sophany. ‘When the water reaches five to seven metres, there are only a few male crabs. Crabs need shallower waters for breeding.’ Even when the dredgers have moved on, the crabs don’t return. 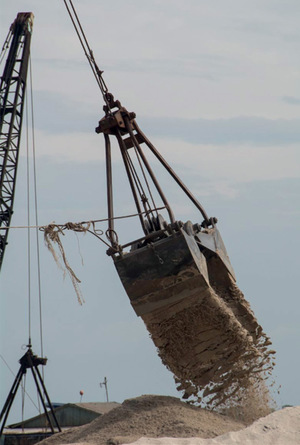 Studies have demonstrated that if sand extraction is greater than the rate at which it is naturally replaced by sedimentary deposits, then erosion will take place, not just at the dredging site, but upriver and downstream too, largely because the greater river capacity increases the speed of the flow, exacerbating erosion and increasing the potential for flooding.1

‘It still impacts us when the dredgers are working upstream, because all the muddy water flows downstream – and crabs can’t live in muddy water,’ explained Sophany.

By 2015, dredging was hitting the community hard. Catches were down, and many families had taken out high-interest loans from loan sharks to stay in business. Others ‘collected water snails in the mangroves, but now there are no snail stocks’. Some quit crab fishing altogether to seek work in the new economic zone factories in Koh Kong city, a two-hour boat ride away.

Despite a seeming abundance of sand, and its low cost relative to other mined commodities, rapidly escalating global demand has led to pressure on supplies, and salt-free river sand is particularly prized for use in construction work.

Asia’s development boom is a key global driver of global sand demand – with Singapore by far the biggest importer. In 2012 academic Pascal Peduzzi estimated that ‘the world’s use of aggregates for concrete can be estimated at 25.9 billion to 29.6 billion tonnes a year – enough to build a wall 27 metres high by 27 metres wide around the equator.’ He estimates that between 47 and 59 billion tonnes of aggregate and sand is mined every year.2

Satisfying Singapore’s hunger for sand led neighbours Indonesia and Malaysia to experience dramatic environmental impacts at home – including, in Indonesia’s case, the disappearance of entire islands. One by one, neighbouring countries stopped exporting to Singapore, leaving regional countries such as the Philippines, Vietnam, Burma and Cambodia to replace supplies.

And in a bid to open up a new supply front, in March a Singaporean company reportedly held talks with the government of Bangladesh to explore a nationwide sand-dredging deal.3

In April 2015, when activists from NGO Mother Nature offered to help stop the sand-dredging works, many in Koh Sralao were only too keen to form a partnership. Together, they went from one sand-dredging barge to the next, demanding that they leave. To their surprise, the sand-miners complied. It was later discovered that, with no licence to dredge in the area, companies feared being exposed.

The people who have benefited from all this, who have pocketed all this dirty money, are at the highest levels of government

‘More than 100 people protested,’ says activist Sim Samnang, describing the flotilla of fisherfolk and activists who surrounded and boarded the barges. ‘We warned them away from the area, from our river.’ Each barge was carrying 10,000 cubic metres of sand to be transported out to sea and loaded onto giant cargo ships bound for Singapore.

The sand-dredging business is controlled by senior members of Cambodia’s ruling elite, notably Senator Ly Yong Phat, according to a report, ‘Shifting Sand’, by British NGO Global Witness. Ly Yong Phat is well known in Koh Kong Province, where he is known as the ‘King of Koh Kong’ for his widespread business dealings there.

In December 2016, five community fishers, activists (including this author) and a journalist were illegally detained by security guards from the Udum Seima Peanich Industry and Mine Co while visiting its dredging site on the Tatai River. Two of Prime Minister Hun Sen’s daughters, Hun Maly and Hun Mala, are listed as shareholders of the company.4

Activists Sim Samnang, Try Sovikea and San Mala were imprisoned as a result of their efforts at the Andeung Teuk. ‘The government arrested us and left us in jail without trial for 10 months and 15 days,’ Sim told me in January from a secret location outside Cambodia, where the three were awaiting the outcome of their court appeal. Sim wasn’t hopeful: ‘The appeal court has summoned us to trial again in Phnom Penh, but we don’t trust them. Usually the Cambodian court is working under government power. It’s not independent, we cannot trust them. That’s why we came out of the country.’ 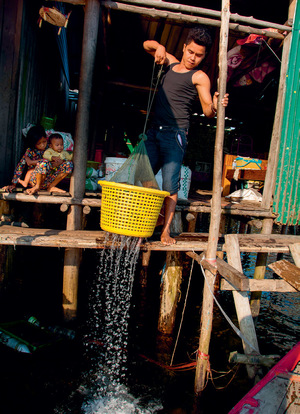 A Koh Sralao fisher pulls a pot of crabs out of the water to load them onto a market-bound boat. Sand-mining has knocked back fish and crab stocks.
Photo: Rod Harbinson/rodharbinson.com

At the appeal hearing their original sentence was upheld, and although they will avoid a further prison spell for now, they remain liable to pay $25,000 compensation to Direct Access, which brought the compensation case.5 Being in no position to pay the large sum, their situation remains precarious.

‘The people who have benefited from all this, who have pocketed all this dirty money, [are] at the highest levels of government, and [in] some of the companies – which are more like mafia cartels,’ says Alejandro Gonzalez-Davidson, founding director of Mother Nature Cambodia. He was deported in February 2015, for opposing construction of Cambodia’s proposed Areng dam.

He explains how in October 2016 he uncovered a scandal involving millions of tons of illegally exported sand to Singapore. By investigating sand import and export trade figures available on the UN Commodity Trade Statistics Database, Mother Nature identified a large discrepancy in quantities of sand exported by Cambodia to Singapore. The discrepancy was valued at around $750 million.6 So where had the missing sand gone?

‘Hundreds of millions of dollars have been stolen from the Cambodian people,’ says Gonzalez-Davidson.

The Ministry of Mines and Energy have repeatedly dismissed the discrepancy, with spokesperson Dith Tina saying there was no ‘concrete proof’ and that re-import and export of the sand through third-party countries might be responsible. The response of the Cambodian government to the scandal was temporarily to halt sand exports to look into the matter.

In December 2016, the Cambodian Parliament’s anti-corruption commission called on mines and energy minister SE Suy Sem to explain the discrepancy, but in a letter to the Singapore Ambassador on 7 March 2017, the Commission said that it ‘did not find the explanation satisfying’.

The letter went on to request that the Singapore government share full details and documentation of all its sand imports: ‘Failure to effectively allay these suspicions and to collaborate with us might tarnish the reputation of Singapore, a country regarded as being one of Asia’s most transparent and least corrupt.’

At the beginning of April, opposition parliamentarian and Commission member Son Chhay said that he had met with officials from the Singapore embassy, who had declined to provide the information requested. The Cambodia Daily reported Chhay as saying: ‘I think that the Singapore side is trying to hide something. They are not honest with us.’7

The controversy remains unresolved. Meanwhile, in April Mother Nature’s activists discovered that construction of a sand-washing facility was under way deep inside a national protected area. They suspect dredging operations will restart at any time. ‘It’s quite evident that sand is too valuable, too much money has been made by a lot of people, dirty money, and they’re just trying to make sure that this resumes eventually,’ explains Gonzalez-Davidson.

‘Fish have returned and dolphins have been spotted too,’ enthuses Mot Sopha. At Koh Sralao, things are looking up since the halt on sand-dredging. ‘We have money to repay our debts from buying fishing nets and boat equipment,’ her husband Sophany adds.

The community remains concerned, however, because some of the dredging boats have not left the area. Sophany remains undeterred. ‘Now we have changed our behaviour. We feel stronger than before. We will go and complain if they start dredging again,’ he concludes.