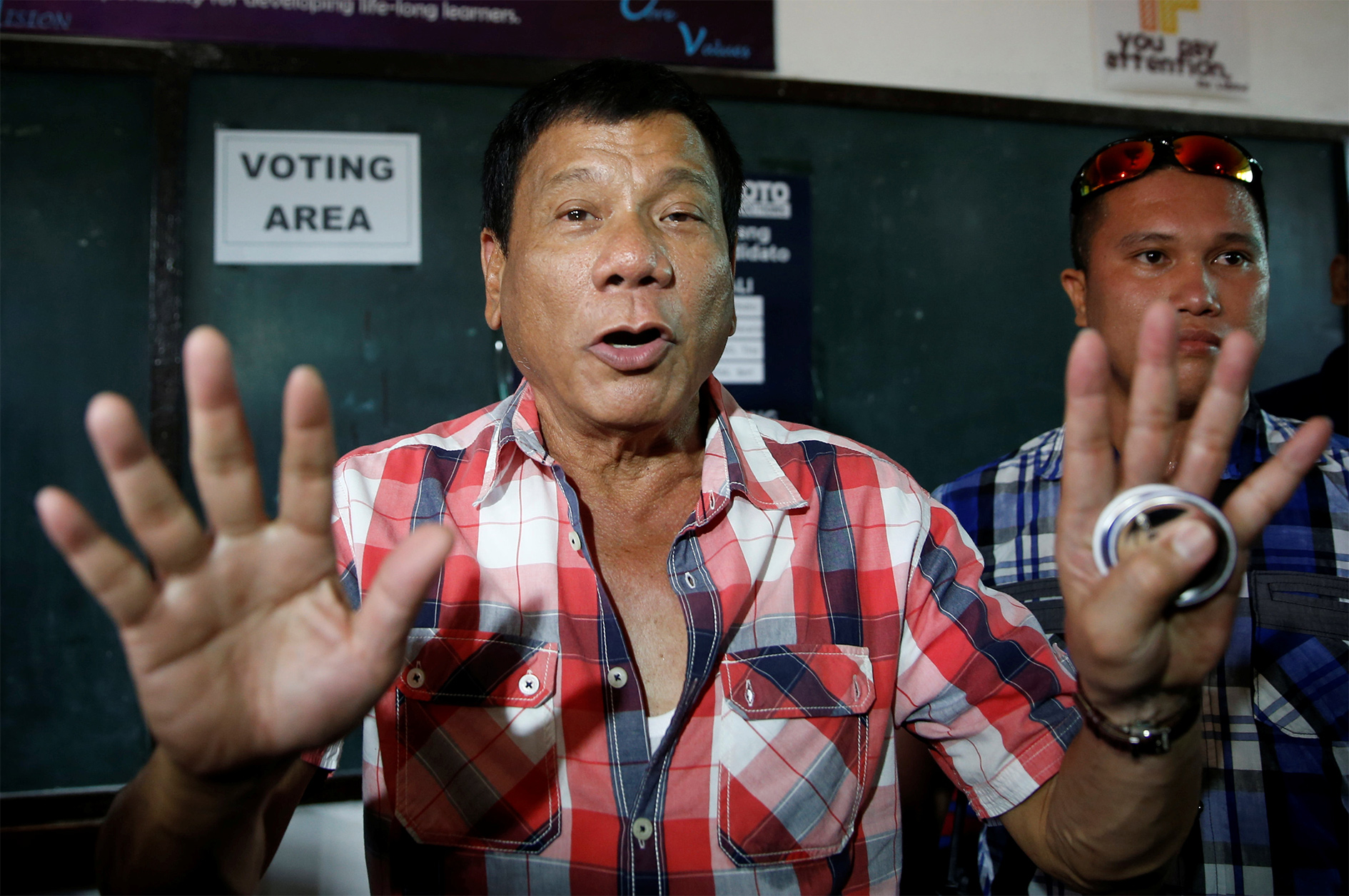 His name is Rodrigo Duterte, Mayor of Davao City in the southern Philippines and he is now the presumptive president elect of the Philippines, to be sworn in on 30 June.

The people in his province are euphoric and the excitement in the air is almost tangible. There are merchandise of with his name and photographs everywhere – t-shirts, caps and more. One would think, it’s the new religion and that he is a ‘Messiah’ of sorts.

Change is coming, they cheered in the run-up to the elections on 9 May and now that he won by landslide.

It’s seen as a protest vote of the poorest of the poor — a quarter of the Philippines’ 100 million people live below poverty line or roughly a dollar a day — against decades of elitist policies from those in power.

But there’s a cloud of fear hanging over the incoming administration. And the fear is as real as it can get.

In his first press conference since winning the elections, Duterte vowed to bring back capital punishment through death by hanging for heinous crimes.

And for those convicted of killing along with robbery and rape, they would be meted ’‘double the hanging.’

After the first hanging, there will be another ceremony for the second time until the head is completely severed from the body,’ said the tough-talking Duterte during his press conference.

He preferred death by hanging, he told reporters, because he did not want to waste bullets.

Tens of thousands of criminals would be killed, Duterte has vowed, and the next generation would be free from drugs, as he warned drug pushers and users that he would go after them.

‘I expect you to obey the laws so there will be no chaos. I will hit hard on drugs and I promise them [criminals] hell,’ Duterte declared as he outlined his vision for the nation.

Incumbent Philippine president Benigno Aquino has warned that Duterte would be a dictator.

There’s fear especially among those who survived the 20-year dictatorial rule of the late strongman Ferdinand Marcos.

And then there are the stories told by Davao residents of the infamous Davao Death Squad, which has been linked to Duterte and is widely believed to be behind the killings of at least 1,000 criminals in the city, mostly those behind petty crimes.

The Davao police have not found evidence of the existing of the death squad but international organizations such as Human Rights Watch (HRW) and the United Nations have found evidence that such government-sanctioned groups exist.

And the victims themselves attest to the existence of the squad.

Clarita Alia, who lives in Davao, lost four sons to people believed to be members of the Death Squad. The police had warned his third son that there would be consequences after he was accused of stealing a cellphone in November 2003.

A few days later he was dead, stabbed in the back with a butcher knife, according to an article in The New York Times. He lost four sons, who all received similar warnings from the police and all were stabbed a few days after.

In a recent piece, the New York-based HRW said Duterte’s electoral victory will obligate him, after he takes office in June, to extend the human rights protections embodied in the constitution to all the people of the Philippines — even those he considers ‘criminals’.

HRW said Duterte’s statements both before and during the presidential election have raised grave concerns that his administration would result in a serious regression of human rights.

In past speeches, HRW said, Duterte has described his murderous tactics as a key plank of what he insists has been an effective governance strategy.

‘What I want to do is instill fear,’ he told reporters in February 2009. ‘If you are doing an illegal activity in my city, if you are a criminal or part of a syndicate that preys on the innocent people of the city, for as long as I am the mayor, you are a legitimate target of assassination.’

‘He extended that strategy to his presidential campaign platform on a near-biblical scale, promising the mass killings of tens of thousands of “criminals,” whose bodies he would dump in Manila Bay,’ HRW said.

Like HRW, I too, am worried for my country.

Duterte has warned that his presidency would be bloody. And I imagine bodies of criminals would be strewn grotesquely in public places, in the famed Manila Bay and even in ordinary people’s backyards.