The bodies of murdered women should not have to be the catalyst for responsible development, writes Erin Kilbride. 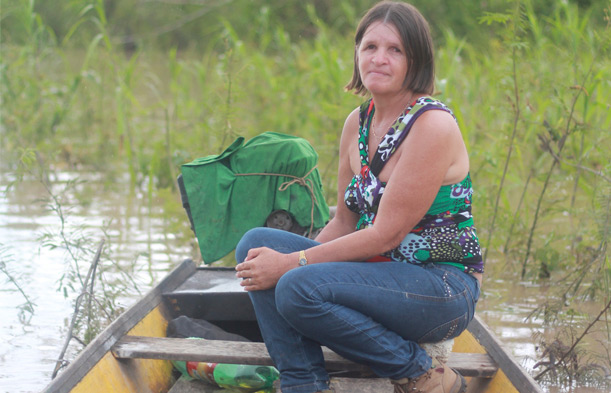 On 21 June 2016, dam workers found Nilce de Souza Magalhães' (above) body washed up on the river bank of Usina Hidrelétrica Jirau, a dam that she had publicly opposed.

Last week, a human rights defender's body was found drowned in the hydro-electric dam she spent three years fighting. Nilce de Souza Magalhaes was a fierce opponent of the Usina Hidrelétrica Jirau, a rock-fill dam in north-western Brazil. She was murdered in January 2016 by a man who said he wanted to ‘silence’ her. On 21 June, dam workers found Nilce's body washed up on the side of the dam's river bank. Her hands and feet had been tied with ropes and attached to large rocks that kept her body submerged under water for six months.

Brazil is one of the deadliest countries in the world for those who work to defend people's right to land. Front Line Defenders has documented almost 30 killings of environmental, indigenous, and land rights defenders in Brazil in 2016 alone – Nilce is the 27th. In 2015, Global Witness ranked Brazil as the deadliest country in the world for environment rights defenders.

The Jirau dam was first commissioned in 2013, with most of the power set to be exported 2,000 miles across the country to south-eastern Brazil. Despite laws that lay out a strict approval process for water development projects, critics say many criteria were rubber-stamped before consulting with local communities that would be most impacted. In 2010, a coalition of local and international rights groups criticized the ‘highly-flawed’ environmental impact study prepared by the energy and construction companies prior to launching the project.

The dam uprooted Nilce's community and forced them onto a compound with no running water or electricity. It diverted the Madeira River that Nilce's family had lived off for decades and destroyed their lives as fisherfolk.

After three years of campaigning against the project, Nilce went missing on 7 January, 2016. On 15 January, police detained Edione Pessoa da Silva after an anonymous caller tipped them off. He confessed to murdering Nilce, and escaped from prison days later. Authorities stated that Nilce's murder followed personal accusations she made against da Silva, but members of her community and organization, Movement of People Affected by Dams, say the killing was a response to her powerful activism.

From 2013 to 2016, Nilce led public demonstrations against the dam, spoke at hearings, and submitted legal complaints that initiated civil and criminal proceedings against the Usina Hidrelétrica company and Sustainable Energy of Brazil (ESRB), the consortium responsible for developing the dam. Her work led to a Public Prosecutors' Office investigation into ESRB for failing to compensate displaced fisherman, and another criminal inquiry into data manipulation to obscure how destructive the dam would be. After Nilce spoke at a federal negotiation last December, the government commissioned a state delegation to visit the region and investigate reports of violations.

Nilce was effective and her advocacy was smart. She will never see the results of the investigations she initiated, but her murder is a morbid testament to her power.

Since Brazil's President Dilma Rousseff was suspended in May, political discourse in the country has become openly hostile to human rights. One of the interim government's first moves was dismantling the Ministry for Human Rights. What used to be a ministry devoted to promoting Women, Racial Equality, and Human Rights has become one ‘Secretary’ at a desk in the Ministry of Justice. The new Minister of Justice has referred to the peaceful protests of some land rights organizers as ‘guerrilla tactics’, and the interim president just set up an all-white, all-male cabinet. The National Programme for the Protection of Human Rights Defenders lacks resources to provide adequate support, and HRD ‘beneficiaries of the program routinely say their reports of death threats and attacks go unanswered.’

Nilce lived and worked in a marginalized region of Brazil, where the National Programme for the Protection of Human Rights Defenders does not even operate. Her death was not unavoidable, but its prevention was not prioritized. Brazilian authorities need to thoroughly investigate Nilce's murder and bring to justice the people responsible for planning and executing the killing, but the government itself must be held accountable for demolishing the human rights mechanisms that could have protected her.

In the weeks after environmental rights defender Berta Cáceres was murdered in Honduras – a killing that shook the international community in a way that few attacks on human rights defenders do – major shareholders and investors pulled out of the dam Berta was fighting. Following a week of very bad public relations, most decided that bankrolling a controversial dam in Honduras – a state known for violence against indigenous communities and impunity following HRD murders – was not worth the headache. In the months since Nilce's muder, some local Brazilian community organizations have demanded that international funders withdraw support for the Jirau dam.

RELATED: ‘Because the river told me’ - peasant farmers are right to be wary of ‘development’, explains Nils McCune.

Whether or not the project stops, the killing of human rights defenders should not have to be the catalyst for responsible development. The degradation of human rights mechanisms and structural violence against marginalized communities are cause enough for concern – companies need not wait for the dead bodies of vocal women to prove the point.

When petitions and protests aren’t enough: what next?
Night fever: remembering Burkina Faso and Tom Waits