For all the fancy packaging, many of our gadgets have nothing to do with capitalist success stories. Bob Hughes explains. 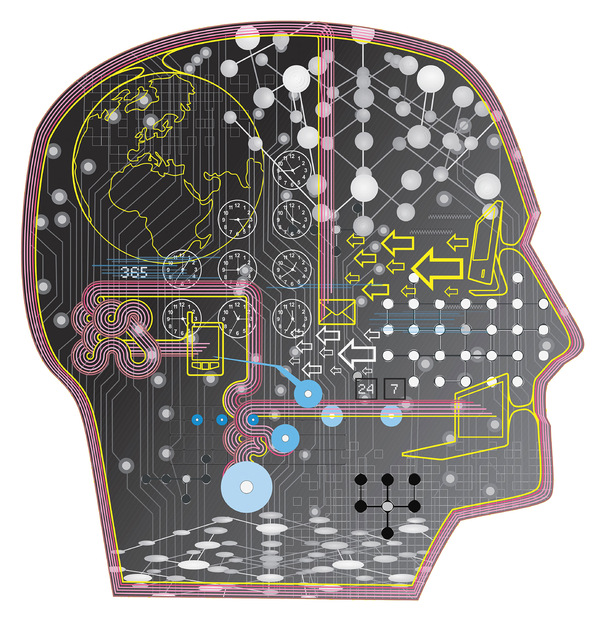 In early 2011, I was handing out leaflets at a demo against privatization of the British National Health Service. A smart middle-aged couple hove into view. They didn’t look as if they’d be terribly receptive but I thought I’d have a go: people often confound their stereotypes. But before I could utter a whole sentence, the man snatched my leaflet, scrunched it up and said: ‘You people are mad! You want to turn the clock back! You want to take us all back to a miserable world that’s simply incapable of producing something like this.’ And from the inside pocket of his overcoat he produced a new Apple iPhone.

‘This,’ he said, brandishing it under my nose, ‘is what a free market does. Brilliant technology that works! Not the rubbish you get from the kind of society you people want! She knows!’ And here he indicated his wife. Yes, she nodded, she had grown up in Romania. ‘This is the future,’ he continued, ‘not that!’ And with a contemptuous side-glance at our home-made placards, away they strode, into the future.

This either/or mindset bestrides the political landscape like the ancient Colossus of Rhodes. Again and again we hear, even from people of the political Left, that whatever its failings, capitalism reigns supreme when it comes to delivering advanced technologies. If we want wonderful things, we need the cut-and-thrust and inevitable casualties of free-market competition. One columnist, responding to the 2010 suicide epidemic at Foxconn’s iPhone assembly plant, equated boycotting the company to boycotting the 21st century.1

But the notion that ‘progress’ and ‘technology’ equal the latest piece of consumer electronics is just hot air. According to hypertext pioneer Ted Nelson, an iPhone is not technology, it is packaging.2 Yes, it uses technologies (von Neumann architecture, binary arithmetic units, random access memory, Unix or a similar operating system, TCP/IP, DHCP, HTTP, USB, Ethernet… I could go on). Most of them are surprisingly old technologies, developed long before capitalist firms became computer enthusiasts. And they often do less than they did, or were meant to do, when they were new.

Were you aware, for example, that your smartphone or laptop is capable of sharing its resources with a whole network of cheap ‘dumb terminals’ or even old, cast-off machines? Its operating system (Unix, or one of its Open Source workalikes) began life in the late 1960s to serve multiple users simultaneously from a single machine. Today, all over Latin America, in South Korea and Nepal, in Greece and other austerity-stricken places, ingenious techies are using this buried feature to give schools and colleges all the computers their students need, despite having had their budgets axed.3

Almost none of these technologies owes anything to the cut-and-thrust of free-market competition. They emerged, instead, from unpaid, individual or collaborative effort, motivated solely by the very impulses that capitalism normally suppresses: the desire to help others, to solve an intriguing problem, to win the respect of one’s peers.

Capitalism’s defenders say that it brings these clever ideas out of the ethereal world of the lone inventor or the university lab into the real world, so that real people can benefit from them – as if capitalism were a sort of wise and reassuring parental presence, or a midwifery service for boffins. This idea is as tenacious as it is false.

Dumbing down technology since 1840

From the 1950s onwards, study after study has shown that capitalist firms are much more likely to resist new ideas than to foster or embrace them. Computers were possible at least a century before the present lineage emerged during the Second World War. Some of the early designs (like Thomas Fowler’s ‘ternary logic’ device of 1840) could have led to much more efficient computing paradigms than what we have now.

The big breakthroughs came to an end when computers started to become capitalist commodities in the 1970s and the failures became legion. For example, computer firms have all struggled to produce reliable operating systems (OSs, the software that co-ordinates a computer’s components and essential processes). Today’s OSs are nearly all based on one written in his scanty spare time by a programmer called Ken Thompson in 1969 (Unix, and its free GNU/Linux successors). Almost all today’s computers still use an architecture devised in the 1940s for fragile, valve-based machines to do precisely one thing at a time – and no more. This is why the typical modern computing device needs such a fast, energy-hungry processor, and is, according to one writer, ‘the least efficient machine that humans have ever built’.4

Computer disk drives have been the workhorses of the computer revolution since the early 1960s; ‘cloud computing’ would be unthinkable without the billions of them that fill data-centres. But the technology was developed in defiance of management orders by a group of IBM workers, who ‘risked their jobs to work on a project they believed in’.5

Where capitalist firms excel is in their tendency to ‘run away’ with any technology that they eventually decide to adopt, forcing it into every possible nook and cranny of economic life that might yield even a short-term profit, and stifling other technologies that might threaten the profit stream – hence the winner-take-all character of technological change in capitalist economies. Technologies that start out full of promise turn into juggernauts. Nothing illustrates this more vividly than the computer and the internet. The promised ‘weightless economy’ is now one of the world’s greatest producers of greenhouse gases. In 2010, Greenpeace found that the internet’s global population of servers was consuming more electricity than Germany or even India.6

And here’s the paradox. Every new technology aims to achieve more with less. Yet the moment the forces of economic competition get involved, the equation is thrown into reverse. The more efficient the technology, the bigger its environmental impact, leading finally to the ecological catastrophe we now face.

The problem was first defined by the economist William Stanley Jevons in 1865. The British government had asked him to examine why Britain seemed to be getting through its coal reserves at an ever-faster rate, although steam engines were becoming more efficient with each passing year, requiring less coal to do the same amounts of work. Jevons’s verdict was that this was indeed a genuine phenomenon, probably an intractable one, and not confined to steam technologies: where there is price competition, greater efficiency can lead to greater demand, which negates any savings in energy consumption.

Since then, many economists have tried to show that Jevons was wrong, or that better technology would eventually achieve ‘escape velocity’, and start delivering the hoped-for reductions: a phenomenon known as ‘decoupling’. This is often the basis of ‘green growth’ arguments, but actual instances of decoupling are very hard to find. For example, LED lights seem miraculously efficient. They need minuscule amounts of electricity in use – but they use enormous amounts in manufacture, to which must be added the environmental and human costs of extracting and refining the raw materials that go into them, as well as packaging and shipping, all of which are borne far from the point of use. Only the brute force of global inequality keeps these expenses off the bottom line. The positional pressures on consumers and manufacturers to take advantage of the new, cheap-looking technologies while they still have a cost advantage (or might give rivals a cost advantage) then ensure massive growth in usage and impact, for little or no increase in anybody’s welfare.

The underlying reason for the Jevons effect is now becoming apparent: social inequality. When powerful new technologies emerge in unequal societies, they are deployed to protect and entrench inequality.

When powerful new technologies emerge in unequal societies, they are deployed to protect and entrench inequality

The implications are radical. Inequality cannot be allowed any longer to turn humanity’s achievements into juggernauts. Inequality may be the ‘great unmentionable’ of capitalist economics, but it must be challenged. Equality of all human beings has to be our goal, plain and simple. Not just gender equality, or ‘equal opportunity’ or ‘equality of respect’, but equality, as in nobody having more resources than anyone else without good reason (for example, if they are ill, or old, or very young, or handicapped in some way, or have a project that we all agree merits special support).

Reducing inequality offers a genuine win-win solution: humans gain, and so does our environment. And it becomes a ‘triple win’ when one looks again at how technological innovation actually happens. Here, equality is central.

The unlikely and officially disapproved partnership that produced Britain’s first electronic computer, the Colossus in 1943, is typical: on the one hand, a team of working-class telephone engineers led by a bricklayer’s son, Tommy Flowers; on the other, the posh-but-eccentric (and gay) mathematician Alan Turing. Their superiors did all they could to kill the partnership and bury its achievements, but the threat of national extinction robbed convention of its usual force. The collaboration proceeded, albeit briefly and on a shoestring – yet with terrific consequences. On the larger historical scale, there is plenty of evidence that ‘the rise of the West’ itself, which has made extreme inequality the global norm, owed far less to the creative energies of its new, capitalist states, than to their violence, and a treasure trove of technologies developed during the so-called ‘dark ages’ by anonymous craft-workers in egalitarian guilds and fraternities.9

How much further might our technologies have advanced by now if the commitment to equality that’s routinely emblazoned on public buildings and even our coins carried real, practical force? Today’s most creative societies are also our most egalitarian ones. In their dim way, even the ‘big beasts’ of the capitalist economies acknowledge equality’s importance, setting up hermetically sealed, quasi-egalitarian ‘villages’ and ‘campuses’ where programmers, designers and so on can operate free from the brutal hierarchies that dominate life for their other employees.

We are encouraged to marvel at our era’s technological achievements and either place our blind faith in them, or despair. We should recognize how pitiful those achievements actually are, and how obscene their impact, in relation to what is possible.

Bob Hughes taught digital media at Oxford Brookes University until 2013, with a particular interest in publishing for social change. He is the author of The Bleeding Edge: Why technology turns toxic in an unequal world (New Internationalist, 2016).

Matters of life and death
PrEPped to go?