Richard Swift on the Moroccan leader. 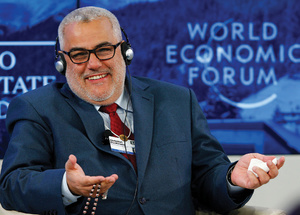 Benkirane’s moderate religious Justice and Development Party (JDP) was re-elected in October 2016 to head Morocco’s coalition government in the Kingdom.

Just 43 per cent of electors bothered to turn out in a multiparty election that bestows only very limited power on the winner. Despite hopes born of the 2011 Arab Spring agitation (and met with savage police repression), the JDP and other Moroccans committed to popular rule have been unsuccessful in moving the goalposts against a powerful monarchy and its wealthy inner circle. On constitutional paper it’s a limited monarchy, but in fact it pretty much continues to run the show, taking all major decisions and dominating much of civil society and the media as well.

In their first term in office, Benkirane (now 62) and the JDP (in coalition with other parties) never deviated from implementing royal directives or even pretending otherwise.

The main Moroccan response to the political puppet show in Rabat has been a combination of amusement and apathy. Voters ended up rewarding the JDP with a slight increase in seats against a background of abstention particularly by the (largely unemployed) young.

Benkirane comes across as having an ideology of balanced political Islam – warning against the dangers of secularism but not too worried about the length of women’s skirts. For the West, Morocco remains an ‘island of stability’, but the lid may prove to be screwed down too tightly on this cauldron of persistent inequality and rampant corruption.