A photographic account of changes over the years in: housing; water; education; health; sanitation; food and farming; technology; and women. 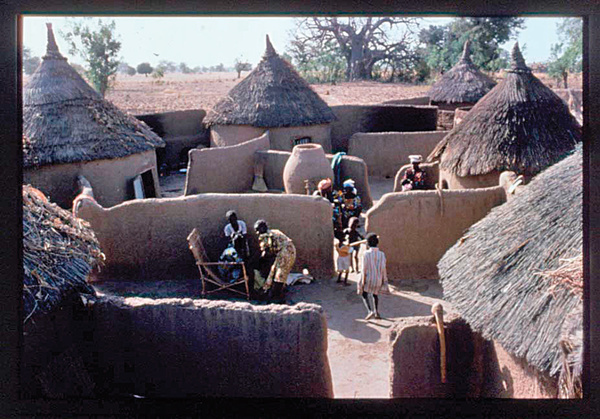 Housing – from straw to iron 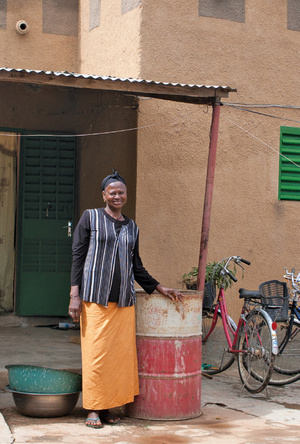 The physical appearance of the village has changed substantially over the decades. The photo above from 1985 shows a concession (the local French term for a family compound) as traditionally constructed – round houses with earthen walls (the colonialists disparagingly called them ‘mud huts’) and thatched roofs that made them very picturesque to the Western eye.

Those thatched circular huts do still exist, but more and more are used for storage, animals or children. Anyone who can afford to prefers to have their house built in rectangular shape with baked-earth bricks and a corrugated iron roof. Although these roofs draw in the heat, they last a lot longer than the thatched variety and are much more watertight in the rainy season – besides, there isn’t the straw for thatching that there used to be.

In 1995 Mariama was dreaming of just such a new house and resolved to put the money she earned as my interpreter towards it – each wife has a separate house, though her children also sleep inside it. That house was built, but in 2008 was destroyed during particularly violent rains.

She now has a much more substantial abode – bigger than her husband’s – complete with a decorative rendering. She lives in it with her daughter and her daughter-in-law. Of course, not everyone has been able to afford an upgrade like that – and housing is generally a good indicator of how poor a family is. Inside such houses there is still generally no decoration to speak of and very little in the way of furniture.

Water – the blessing of pumps 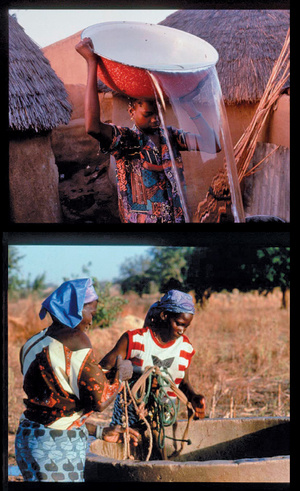 One of the main messages of our 1985 film was that women had to work far too hard – and collecting water played a large part in this. Water for drinking, washing and cooking had to be carried long distances from one of the few reliable wells and this took up hours of each day.

But in 2002 a joint programme between the Burkinabè government and a German NGO offered all the families in Sabtenga the chance to have a water pump sunk beside their concession. The catch was that they had to contribute $270 towards the cost – an enormous sum for a subsistence-farming family – and then pay for its maintenance. Many families could not afford this, but enough could that pumps were installed at many different locations around the village – and even the families without can rent access to them.

The concern now is that the water table is sinking so low that in the dry season these pumps will soon not be able to reach a supply. New super pumps that reach much deeper are very expensive to construct and only three are so far in place.

Water is collected now in all kinds of containers, including plastic ones, and often carried back on bicycles or donkey carts rather than on the head. 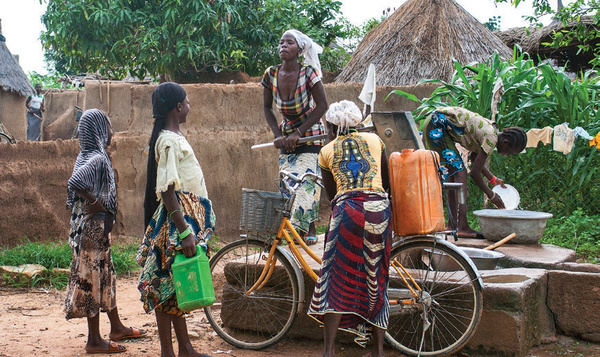 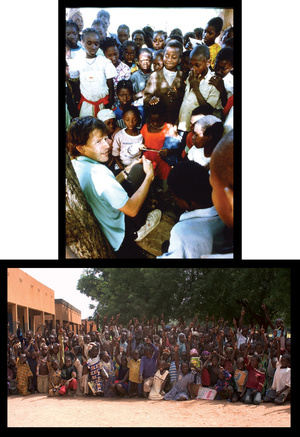 There was no school in Sabtenga in 1985 – the few children who gained an education had to do so by walking the four kilometres or so to Garango. By 1995, a primary school had been built, but its three classrooms could accommodate a new seven-year-old intake only once every two years, leaving at least 50 children a year without any education. I gave a lesson to children under a tree about life in Britain and they were full of questions.

Three more classrooms had been built by 2005, with money from the debt relief Burkina Faso had been granted under the HIPC Programme on condition that the money was spent on health and education. Here, in this village far from the capital, was the concrete proof that it was getting through to the right places rather than into the pockets of corrupt government ministers. New primary schools in surrounding villages had reduced pressure on places in Sabtenga itself. 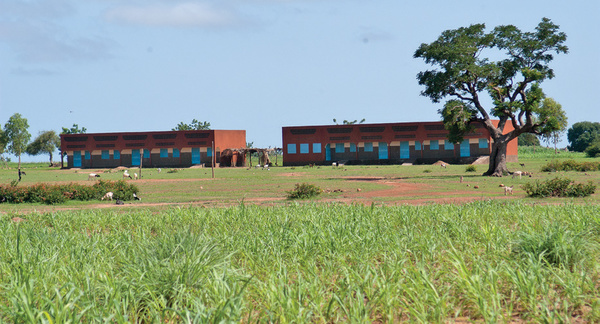 There is now also a secondary school in the village (pictured above). It started with just one year group, but admitted its third intake last September and plans a new set of three classrooms as it expands further. Mariama’s youngest daughter Zahara is currently studying here.

Health – from an empty shell to a hub 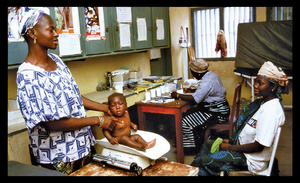 In 1985 the health centre was non-existent – the shell of a building with neither medicines nor staff. By 1995, it was fully functioning (see left) – with fewer staff than would be ideal but still a hive of activity and marking a major improvement in villagers’ quality of life.

A separate maternity unit had been added by 2005, again thanks to debt relief. But villagers still had to pay to use the clinic’s services, which meant that many women continued to deliver their babies at home, with the inevitable result that some died in childbirth.

In 2016 the clinic was much the same, though better staffed than before. The staff were seeing a big increase in their workload because, I was delighted to discover, healthcare became free for pregnant women and children under five in June, following an election promise of the new president, Roch Marc Christian Kaboré. This is being paid for by a rise in taxes on alcohol, tobacco and mobile phones.

I witnessed primary healthcare in action, going out with local health assistants to distribute anti-malaria medication to all children under five (left) – an internationally supported campaign funded by the Malaria Consortium that saw 1.3 million children reached nationally by 29,000 volunteers. 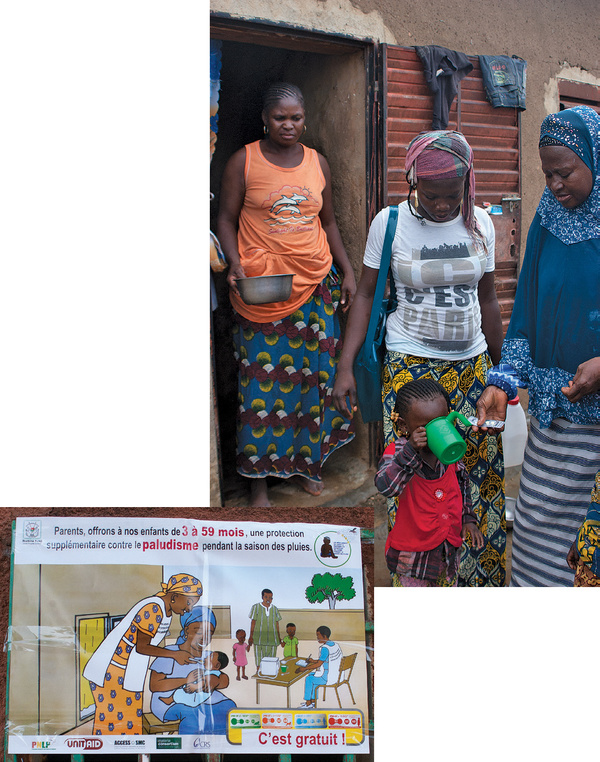 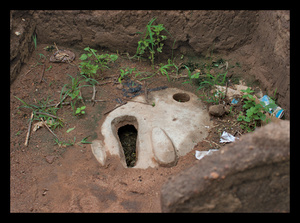 Traditionally, the only toilet in the village was a secluded spot in the open fields. When the school and health centre were built, latrines were attached, but the majority of villagers would still defecate in the open air, with the inevitable poor health consequences. For all the improvement in the provision of drinking water, as of 2005 there were still no other latrines – which reflected the lack of progress worldwide towards the Millennium Development Goal on adequate sanitation. The local NGO Association Dakupa was, however, operating a rolling programme of latrine installation that was supposed to reach Sabtenga in the near future. By 2016 these latrines had long been in place, and many are still functioning. Others, though, have fallen into disrepair (top photo) – and ensuring that latrines are cleaned out and maintained has often been a problem for rural sanitation programmes the world over. Some concessions have now installed new latrines on a different model, like the one shown in the second photo, in which the faeces are mixed with ash until they are eventually in a state suitable for use in the fields as fertilizer. Certainly there is much more widespread acceptance in the village now that the only safe place for defecation is in a latrine. Urine is often separately channelled to feed plants with its nutrients. 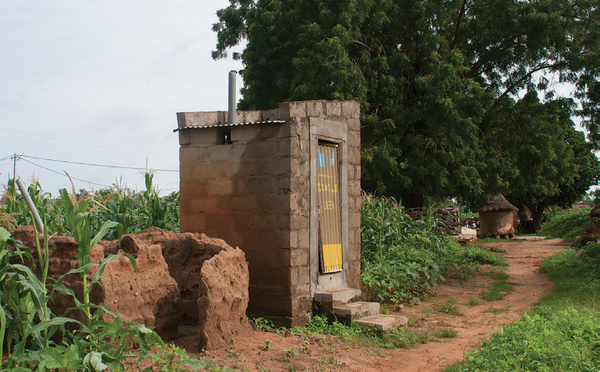 Food and farming – from millet to maize 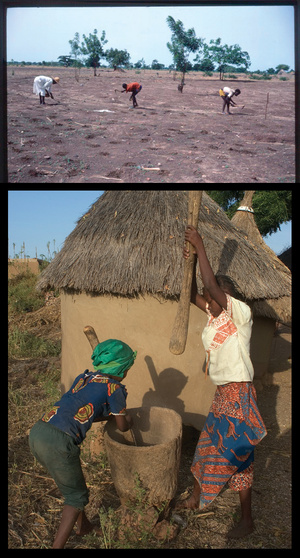 Most people in the village depend on cultivating subsistence crops – and the traditional crops were millet or red sorghum, drought-resistant varieties that would be pounded into flour and then turned into the staple food, a stodgy porridge called tô. This remained the case in 2005, at which point most of the farmers were using only animal dung as a fertilizer. But around seven years ago agronomists visited the village to talk about the advantages of using chemical fertilizer. Some people resisted, feeling they had enough organic manure from animals. But when they saw the better results achieved by the farmers who did use fertilizer, they soon switched over and this has become much more common now.

Around the same time, most people also switched from millet to maize, which they find takes much less work – the photo below shows Mariama’s husband Issa in his maize fields (along with his nephew, also called Issa). The maize is still ground into flour for making tô, though people almost always pay for this to be done at the village mill now, rather than pounding it in the traditional way. 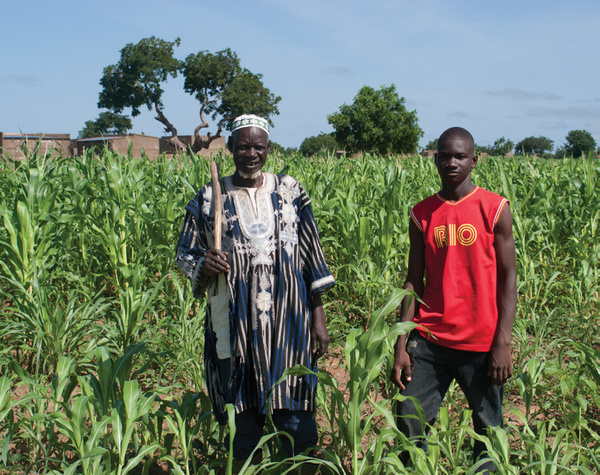 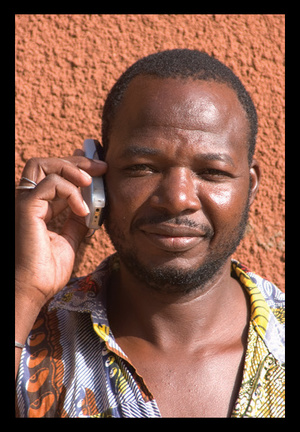 In 2005 I was astonished to find that the first few mobile phones had reached the village – this photo (left) showed Ousmane, who works at the dispensary and was one of the early adopters.

It’s no surprise, given how enthusiastically mobiles have been taken up across Africa, that they are almost as ubiquitous in the village now as they are in the West. They are used only for texting and speaking rather than as computers, but they are invaluable to people whose family members work abroad and with whom they would not otherwise be able to stay in touch.

There is now even a phone mast right in the middle of the village, near the health centre.

But the most momentous change in 2016 was that electricity had reached at least some parts of the village. I had hardly dared to hope for this, but beyond the donkey cart here are the tell-tale signs – masts carrying power lines and even TV aerials sprouting from a few of the compounds.

The number of households covered is limited for the moment by a shortage of electricity meters. But for the first time, families with electricity are able to keep food cool in the punishing heat, while their children can read or do homework in the evenings. 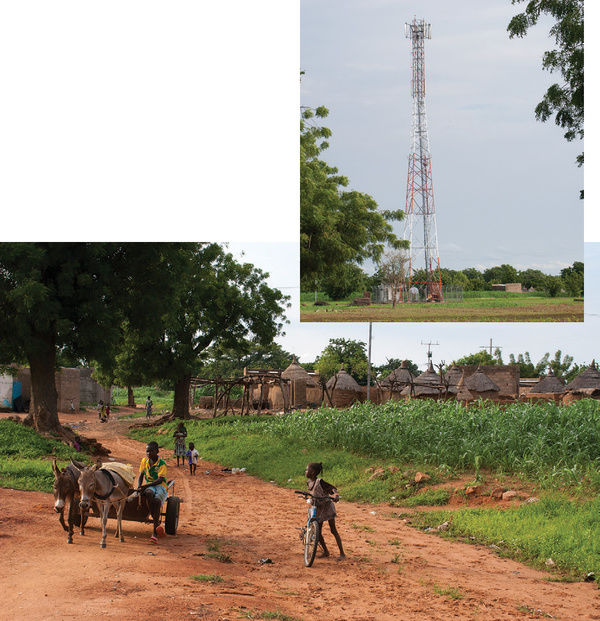 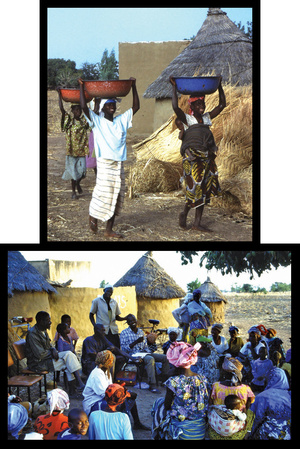 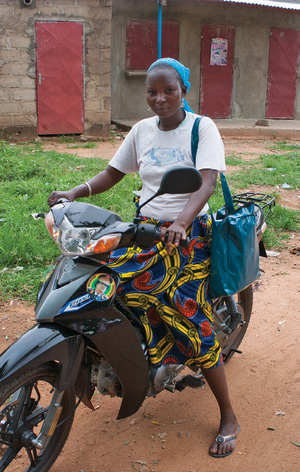 I wish I could report more substantial progress in the political situation of women – though the end of FGM is a huge advance, and the new water pumps have reduced their workload. In 1985 Mariama filled one of the two places reserved for women on the local Committee for the Defence of the Revolution – an amazingly far-sighted policy instituted by Thomas Sankara, who said just before his death: ‘Comrades, there is no true social revolution without the liberation of women. May my eyes never see and my feet never take me to a society where half the people are held in silence.’ The policy fell by the wayside after his assassination and there are currently just 12 women in the national parliament – a mere nine per cent.

There are women’s groups in the village, but these are not formed to challenge the patriarchal status quo but rather to offer each other practical support in gaining a small income from market gardening or petty commerce. Time and again I have attended village meetings in which men are on chairs and women on the ground. Women do now have more access to bicycles and even to motorbikes, like Salamatu Darga, who is taking part in the anti-malaria campaign. But men continue to rule the roost in this society, with even the most forceful, dynamic women having to fall in with their husband’s wishes – and many men continue to take a second wife without even consulting the first.