The clock is ticking for peace in Colombia. Next month a ceasefire with the ELN, the last remaining leftwing guerrilla organization in the country, is due to run out. Guerrilla leader Pablo Beltrán of Colombia’s ELN talks to Mónica del Pilar Uribe Marín. 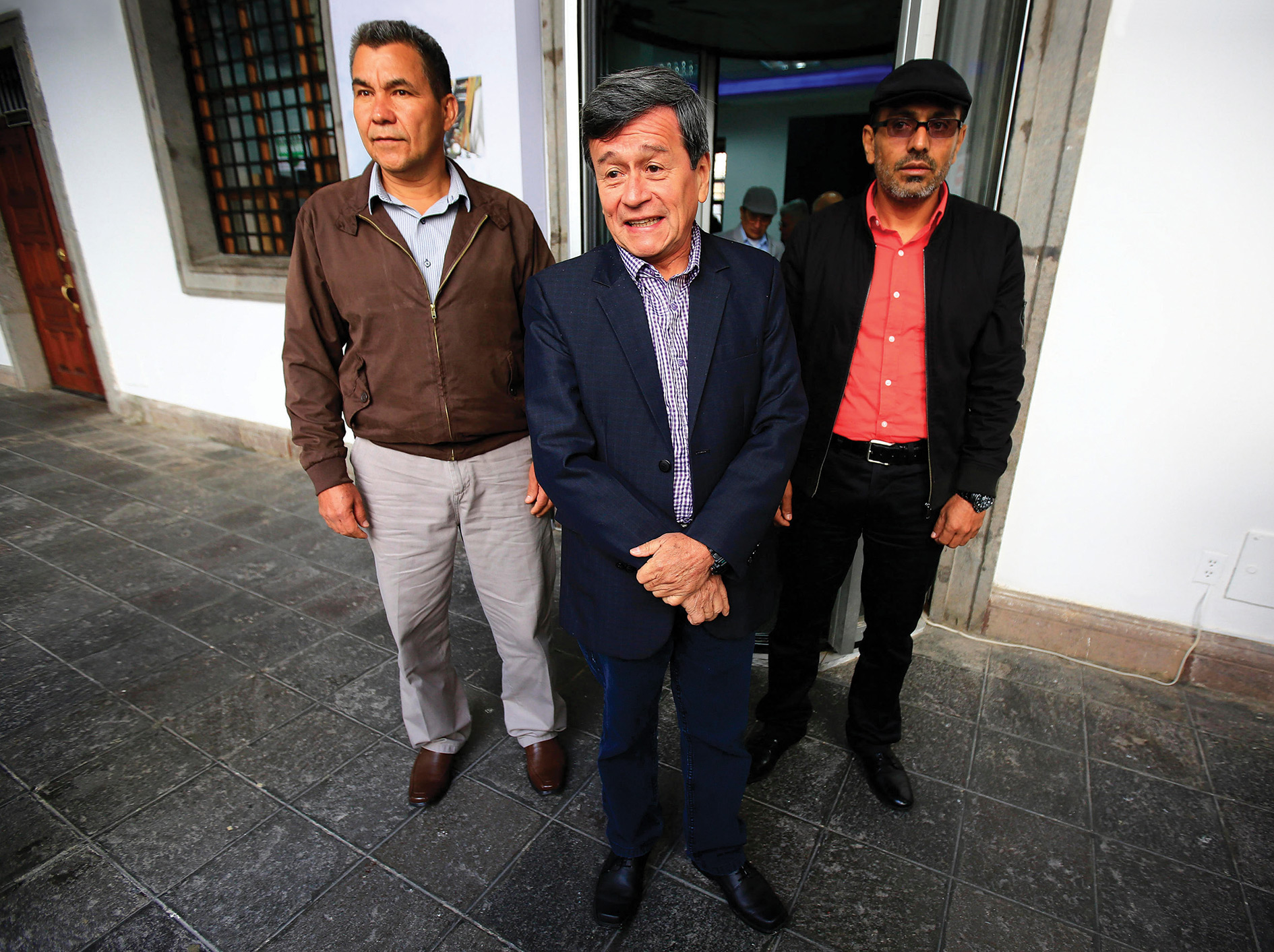 Pablo Beltrán and others in the ELN’s peace delegation address the media during talks in Quito earlier this year.
Photo: EFE News Agency/Alamy Stock Photo

A year ago, despite rightwing attempts to scupper the peace process, Colombian President Juan Manuel Santos sealed an historic accord with the Revolutionary Armed Forces of Colombia (FARC).

There followed months of demobilization, disarmament and reinsertion of guerrillas into Colombian society. By August this year, some 7,000 FARC fighters had laid down arms and the organization reconstituted itself as a political party – the Common Alternative Revolutionary Force.

Now the last remaining active guerrilla group, the National Liberation Army (ELN) is at a critical stage in its peace talks with the government, which began in February this year.

On 1 October, a bilateral, temporary and nationwide ceasefire was announced. It runs out on 9 January 2018. But it could be extended if the talks are going well, if the terms of the accord are kept, and if the enemies of peace do not destroy it.

Heading the negotiations for the guerrillas is Pablo Beltrán, an important ELN leader.

Beltrán was born Israel Ramirez Pineda, 63 years ago in San Gil in the department of Santander. His parents were working people – his mother a dressmaker, his father a master builder. He studied petroleum engineering at the Industrial University of Santander, during times of great political and social upheaval.

Many intellectuals committed themselves to the revolution and in the mid-1970s Beltrán joined the ELN.

My own mistakes result from overconfidence. Maybe I am too convinced about what we are doing

First, he was an urban guerrilla. When the police broke into his house and began to hunt for him, he escaped to the mountains. In 1980 he joined the leadership of the ELN. In 1998 the guerrilla group told the media that it would ‘never demobilize’.

Things have changed since then. Beltrán, leader of the ELN negotiating team in Quito, announced in October this year: ‘All the agreements we have reached have been guaranteed, which shows that there is an internal consensus, and that this delegation has a unique mandate to put this bilateral ceasefire into effect, which is why the agreement was achieved.’

Mónica del Pilar: What is the difference between this peace process and previous attempts?

Pablo Beltrán: For the first time there is an agenda put together over four years of confidential discussions, and in which two points are established. One, there have to be transformations which remove the economic, social and political factors which gave rise to the armed uprising. Two, to take the violence out of politics. The guerrilla organization will stop seeking power by military means and the regime will stop defending it with arms.

Are you better prepared now?

Yes, because two years ago the ELN National Congress instructed us to sit down at the table and see if our interlocutor, the regime, has a desire for peace. The instruction our dialogue delegation received this time was that we must never walk away from the table.

Which are the most difficult issues in the discussions with the government?

The members of the government make unilateral demands and try to impose things. We say that we came to negotiate, not to take orders. That puts the talks into periods of crisis. Afterwards we try to find solutions and we begin again.

You insist that civil society is important in these discussions. How is this participation happening?

It begins by asking people how they should take part, what are their experiences. Afterwards, it enters into a diagnostic phase, examining Colombian democracy, with the aim of reaching conclusions about the changes needed.

The government has stated that this process can continue, but that it is not binding. For us it is binding. If we involve everyone in a big national dialogue to know what must be changed in Colombia, and then we don’t take what they say into account, it makes a mockery of the process. 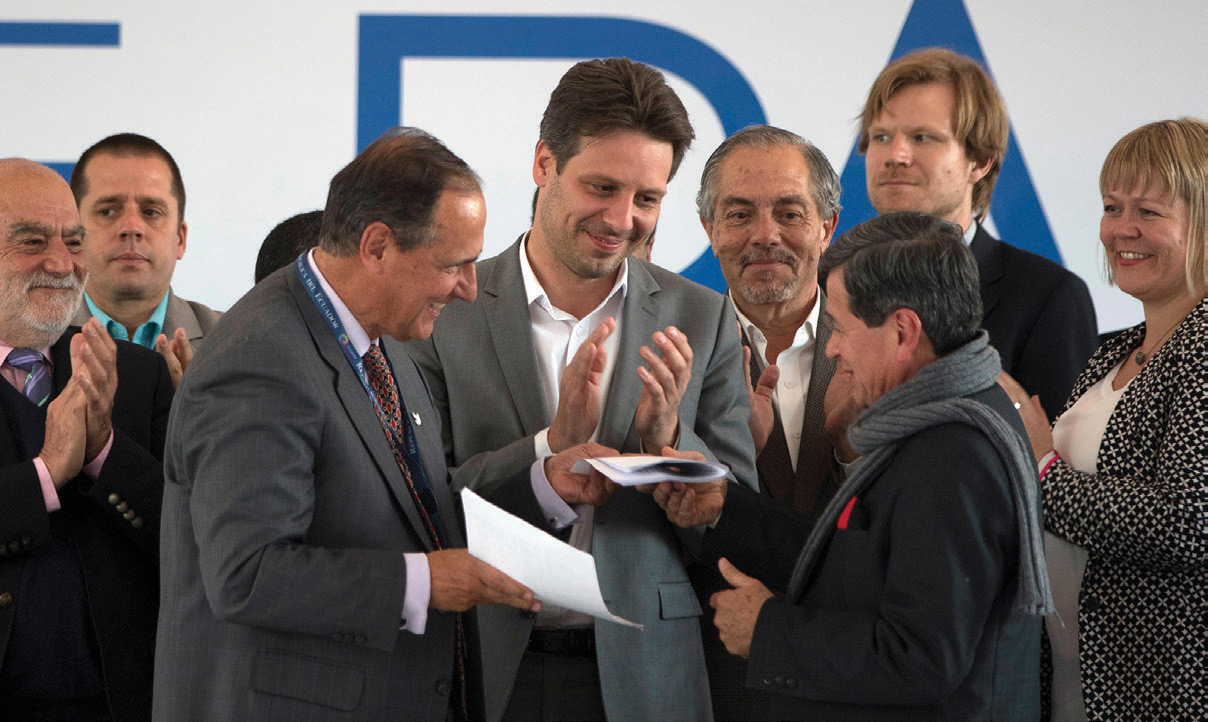 The demobilization of FARC has been accompanied by procrastination and non-compliance by the government. Are you not discouraged by this scenario?

The FARC has made a clear political decision to say ‘yes’ to the peace process and the government has responded in this way. It’s not a good sign for the future. It shows us that the regime is not so united in its desire to move the process forward. Of course this sows big doubts among us. That’s why we believe in actions more than words.

What do you think about the killing of demobilized guerrillas?

Attacking people who are trying to do politics legally is a way to block peace agreements and push people towards acting in self-defence.

What kind of reparations are appropriate, both for the victims of the ELN and those of the state?

The victims must be guaranteed their rights; the truth must be revealed; the responsibilities accepted and there must be repentance. Each person must say: ‘I won’t do this again.’ On that basis there is a guarantee that what happened during the war will not be repeated. That is the essential foundation of reparation for the victims.

If you reach an agreement with the government, how should it be endorsed?

The participation of the people should not happen at the end of the process but from the start. The people must be involved in the planning, participation, analysis of the problems and the changes required, and committed to the conclusions that emerge from that.

What connections does the ELN have with drug trafficking?

Since the 1980s all the ELN congresses have committed to a categorical rejection of drug trafficking. This is maintained in the areas where illicit plants are grown. We collect a tax from the dealers but we don’t have any kind of relations with the mafias or the cartels.

Does the ELN want peace?

We believe that we must continue looking for a way for Colombia to be at peace, and that the power struggle should continue without recourse to violence. We are going to persist in this.

Will the ELN do the same as FARC and form its own political party?

We are more interested in building examples of direct participatory democracy. But we don’t reject a struggle based on parties or political movements. We support them. We are in agreement with that route, but it is not the only way to continue the political struggle.

What mistakes have you and the ELN made?

At the beginning our big mistake was to think that a small group was going to make the revolution happen, and not to value the ordinary people who were also struggling. It was through their pressure that the most important changes were achieved. I don’t believe this attitude is present in the ELN nowadays.

My own mistakes result from over-confidence. Maybe I am too convinced about what we are doing. I know how to listen, but very often that kind of deep-rooted conviction makes it difficult to listen to others.

In your opinion, what type of government is closest to what could be a ‘good government’ for the people?

It’s very difficult to say. A good government has to be one in which the people participate, where society exerts a pressure and is in control and it isn’t only the state that’s in charge of governance.

What do you think of Donald Trump?

I think he is the expression of an empire in crisis. I don’t mean that he is the solution! His presence is the measure of how much the US is in crisis.

The Western powers grouped around NATO are going to make war against any Syrian president, evil or not. It’s all about controlling the oil resources. That is the shame of it – they are wars for oil.

Nicolás Maduro and the media war?

The war is to remove [the Chavistas] from power and take things back to how they were 100 years ago, in order to get better deals for the 300 billion barrels of oil that they have, which make up the biggest reserves in the world.

Part of the war is in the media. Maduro and the revolutionaries have made mistakes. The violent opposition of the extreme Right has made mistakes too, but it supplied considerable resources to the US for years. If they regain control they will do the same again. We hope the Venezuelan people can settle their difficulties, their contradictions, peacefully without external interference.

Mónica Del Pilar Uribe Marín is editor of Prisma magazine and is currently working in Colombia. 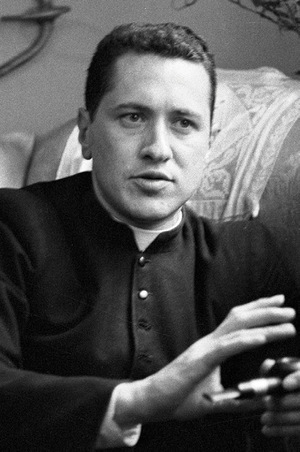 Catholic priest Camilo Torres joined the ELN in 1965. He was to become a leading light.
Photo: Phillip Harrington/Alamy Stock Photo

The ELN – in brief

Beginnings: Founded 4 July 1964 (the same year as the FARC) in Santander, northeast Colombia by trade unionists, students and intellectuals inspired by Marxist ideology and the Cuban revolution. In December 1965, Catholic priest Camilo Torres joins their ranks, followed by three Spanish priests, among them Manuel Pérez, the guerrilla commander from 1983 until his death in 1998.

Ideology: ELN thinking mixes revolutionary ideas and Liberation Theology, calling for a struggle on behalf of the poor. It promotes a nationalist agenda, centred on the control of natural resources, and attacks on the energy and oil infrastructure of multinationals.

Numbers: One figure suggests 4,000 guerrillas, with many more militants. Government figures today indicate 1,500 guerrillas; The Peace and Reconciliation Foundation refers to 2,000 guerrillas, in 51 municipalities spread over 11 departments of the country. There are estimated to be five militants for each guerrilla, doing intelligence work, especially in the cities.

Organization: Leaders are Pablo Beltrán, Gabino, Antonio García, and ‘Pablito’. The ELN had fewer guerrillas than the FARC but deeper political influence due to grassroots work with communities. The structure is politico-military and ‘federal’, with a number of ‘fronts’, each with its own spokesperson. The highest authority is the Central Command.

Tactics: Kidnapping and extortion have been used to fund the organization in its struggle for national sovereignty and a just, democratic socialist state.