Simple models by India’s ‘science magician’, Arvind Gupta, are making learning fun for young minds around the world. Priti Salian reports from a classroom in Bangalore. 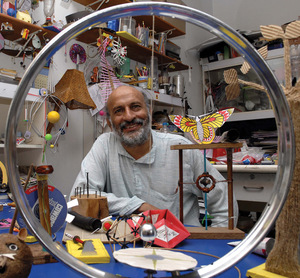 On a bright October morning in Bangalore, India, the activity room of Purnapramati School is buzzing with excitement, curiosity and the occasional shrieks from primary and middle school students.

Each child has been handed a drinking straw, some neatly cut paper, adhesive tape and a pair of scissors. In contrast to their usual impatience, the pre-teens are glued to their seats – listening quietly to their mentor Vishal Bhatt as he tells them how to make a ‘rocket projectile’.

Many have moved closer to peep at the sample he is creating; others are wheedling him to improve their work. Bhatt patiently answers their queries, until each student has their toy ready. He then demonstrates how the cone-shaped paper projectile can be blown through the straw and targeted to perforate a newspaper placed at a distance. ‘Ensure that the tip of the cone is pointed,’ Bhatt instructs. ‘That will keep its area small, and when you blow it with force, it will pierce the newspaper due to extreme pressure,’ he says, inconspicuously slipping in the scientific concept.

Even though some of the students haven’t yet learnt about the correlation of area, force and pressure in their science class, they are likely to remember how it works for classes to come. Their teacher, Geetha Suvardhana, says that it’s thanks to the simple science toy they have created with which they will tinker, discuss and play for months.

This imaginative and easy-to-make toy comes from the repertoire of Arvind Gupta, an Indian engineer who has been fashioning do-it-yourself toys and science models from trash and inexpensive material for almost four decades. His goal? For children to better understand science and maths. Gupta’s toys recycle bottle caps, plastic balls and matchsticks – turning them into models for understanding turbines, the functioning of the eye and hexagonal figures.

‘The idea is to show the kids how they can reuse trash and make something valuable and extremely delightful without buying anything,’ says 64-year-old Gupta.

Bhatt values Gupta’s toys for the simplicity of their design and material. ‘The fear of playing or tinkering is nil as the toys can be safely pulled apart and put together again,’ he says, adding that ‘the element of surprise keeps the kids totally engaged’.

Gupta’s YouTube channel has short films in 20 languages giving free access to ideas for over 8,500 toys and experiments. A handful of organizations in India also conduct weekly science workshops in schools through the year using Gupta’s toys.

In 1980, Gupta quit his job in a truck manufacturing company to become, as some children call him, ‘a science magician’ – churning out enchanting objects from random things. Gupta’s toys have not only found a place in his videos, but also in 30 low-priced books he has authored. He has visited over 3,000 schools in rural and urban India and in 25 other countries. ‘The innate curiosity of breaking this, and hammering that, is the definition of childhood,’ he says. He rues though, that schools in India still perpetuate learning science by rote. ‘Most teachers, even in elite schools, have few craft skills,’ he says.

However, Gupta’s free repository of fun science models for resource-poor schools and children is enjoyed by thousands of viewers. Children across the world, including those at a school for Syrian refugees in Germany, are making and using his toys.

Purnapramati students are excited to give their projectile a new spin by replacing the straw with a discarded electrical pipe or garden hose to see how it changes the way their toy works. ‘Making is only the first step for these kids; the actual exploration begins after that,’ says Bhatt.

Priti Salian is a Bangalore-based journalist who has written on social justice, healthcare and education among other things. Her work has appeared in the BBC, National Geographic, The Guardian, CNN.com and many others.

Guerrillas gamble for peace
‘Every signature was an act of courage’