Are we all terrorists?

Activist Scott Weinstein dances with the terrorist label and finds it a fickle partner. 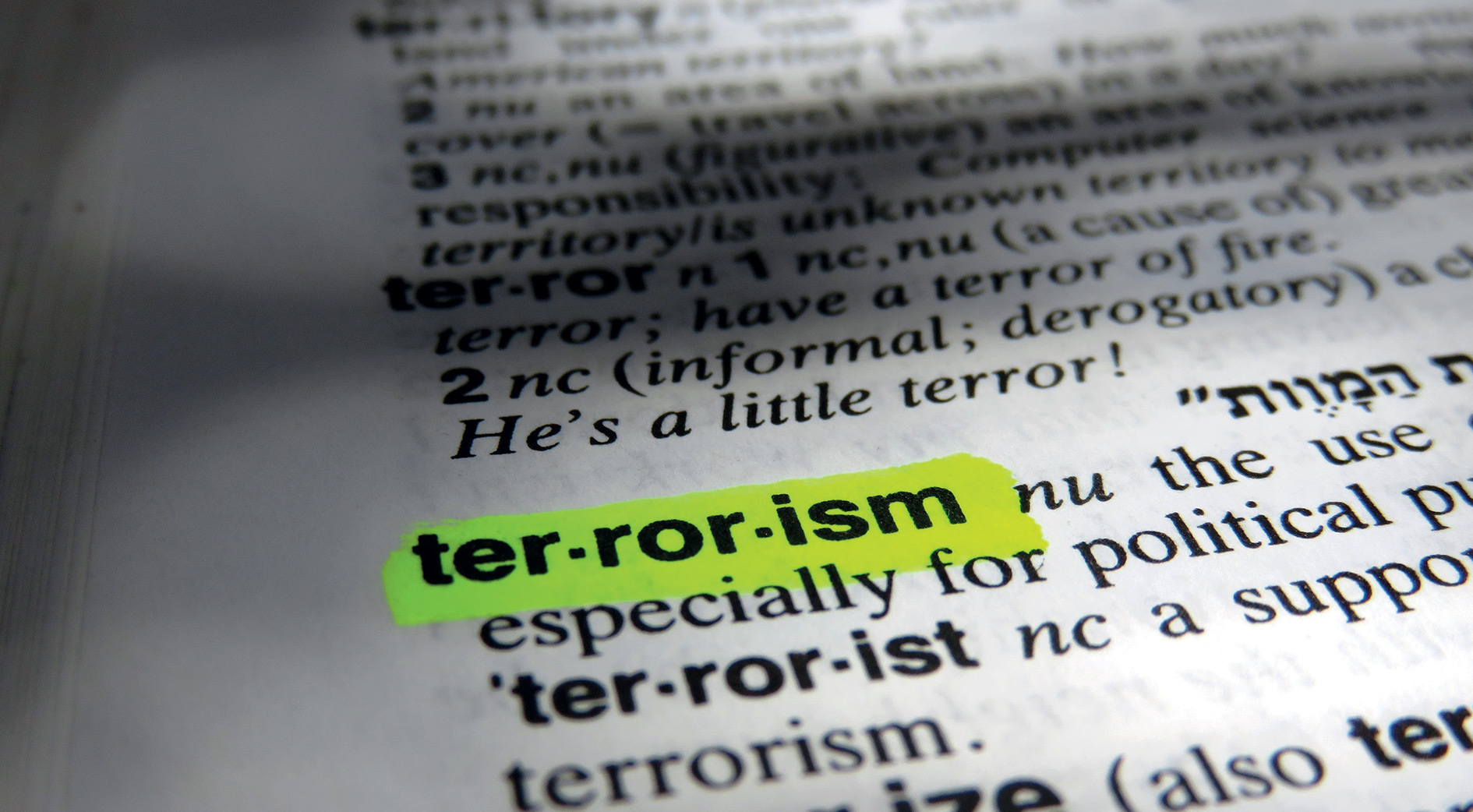 Terrorist! Yes, this means you.

Please open your Old Testament to Numbers, 14: 1-25 where God tells Moses to spy on you Canaanites who were up to no good, and later slaughters you.

Skip ahead to the Declaration of Independence, a magnificent achievement guaranteeing the rights of all Americans – at least the white male property-owning ones. If you weren’t one of these lucky guys and wanted to defend your land (an indigenous person) or gain your liberty (a slave from Africa) you were likely a terrorist even before terrorism.

Today, if you and your children are fleeing your war-for-oil targeted country, your very survival means crossing high security borders designed to keep out terrorist threats – that is, you.

Are you now, or have you ever been a terrorist?

I helped the Service Employees International Union’s campaign to successfully gain union status for janitors and parking lot attendants – most of whom were Latino immigrants and African Americans. In 1985 we blocked major traffic routes into Washington DC and earned the label ‘traffic terrorists’ by the US Congress.

In a 2015 anti-terrorism trial in Argentina, indigenous Mapuche activist Relmu Ñamku was charged with attempted murder. Her crime: pelting a state representative with a stone. The politician was there as part of a delegation accompanying the US oil transnational Apache Corporation. Some 60 Mapuche communities in Chile have been accused of ‘illicit and terrorist association’. Activists were designated terrorists and criminalized for protecting their community’s ancestral lands from exploitation.

How did terrorism get so trifling?

Remember, Argentina and Chile are supposed to be democracies now.

How did terrorism get so trifling?

The term originated in Western history’s bloody re-birth of democracy – the French Revolution of 1789. Maximilien Robespierre’s government used La Terreur – the Reign of Terror – to mass-murder its enemies. His justification was simple: ‘Subdue by terror the enemies of liberty and you will be right, as founders of the Republic.’

Until Robespierre was guillotined without trial, he probably reasoned: what could possibly go wrong?

Before September 2001, only limited enemies were branded ‘terrorist’. Al Qaeda’s spectacular 9-11 violence birthed the big-bang of the Orwellian terror-industrial-complex. The US demanded, the UN Security Council mandated, and 140 countries dutifully passed ‘counterterrorism laws’ on September 28th. According to Human Rights Watch this represented ‘a dangerous expansion of powers to detain and prosecute people, including peaceful political opponents’. Today there is one toxic label, one law and one response to a mishmash of enemies – real and imagined.

We are reminded that terrorists are everywhere. Throwing a stone is as catastrophic as throwing a bomb

This ‘terrorism’ word, according to political linguists like George Lakoff, is being shaped to trigger emotional responses of fear and paranoia, training us to tremble and acquiesce. Kneejerk associations follow: you say Muslim, I think ‘terrorist’. Terrorist is a kind of political swearword used to confront many kinds of democratic disruption. ‘Anti-terrorism’ replaces ‘anti-communism’. ‘Security forces’ replaces ‘death squads’. ‘Anxiety’ replaces ‘critical thinking’. The ‘War on Drugs’ morphs into the ‘War on Terror’.

We are reminded that terrorists are everywhere. Throwing a stone is as catastrophic as throwing a bomb. Many, of course, refuse to accept this rubbish. In 2012 Argentinian civil society took to the streets demanding the repeal of the Anti-Terrorist laws.

‘Anti-Terrorist legislation is aimed at the persecution and criminalization of social protests. It has deepened to the point that there is no worker’s struggle, no student, environmental, social or political resistance that doesn’t end in the initiation of legal proceedings against the most visible activists of each struggle,’ said the Judicial Federation of Argentina.

Counterterrorism degrades the ethical framework that governs society. I’ve ridden with pilots in Louisiana who fly secret rendition planes, and met CIA agents in El Salvador who supervised the torture and murder of Chileans in the soccer stadium. I’ve hosted a Syrian-Canadian tortured for months at Canada’s request in Assad’s prison. Paranoid US border agents rushed me with guns drawn because my companion’s Canadian passport triggered an alarm – years ago in Palestine, Israeli authorities arrested her at a protest. Homeland Security asked her if she knew Osama bin Laden! Then to humiliate us, they handed us a ‘customer satisfaction card’ to complete. Spies and provocateurs infiltrate my Latino and Arab neighbours. My taxes pay for ‘anti-radicalization programmes’ in my city’s schools, and for private immigration prisons far from the city.

This archipelago of rendition and control respects no borders until ‘they’ try to cross ‘here’. Does any of this apparatus prevent ‘acts of terrorism’? The polarization it encourages probably increases their likelihood.

The War on Terror nourishes Islamophobia which only divides us, alienating particularly young Muslims we claim to be so desperate to ‘integrate’. Any nuisance whether it be the Kurds, the Palestinians, the Ukrainians, the Mapuche or the Rohingya and ultimately even you and I, may become worthy targets. After World War Two, countries as diverse as Algeria, Kenya and Israel achieved independence with the help of terrorist groups. Now they treat their opposition as terrorists.

The total focus on antiterrorism means that other desperate needs get ignored. When I went to New Orleans as a first responder nurse after Hurricane Katrina, the national disaster response agency, FEMA, had no plans to deal with the catastrophic flooding – despite it having been predicted as a likely major disaster. As a FEMA boss told me: ‘If hurricanes were designated as terrorist threats, we would have been prepared.’ Badly flooded Houston, hurricane-destroyed Puerto Rico and wildfire-burnt California are the latest proof we can’t focus to prevent predictable catastrophes.

Terrorism is violence, something society opposes, yet institutionalizes and glorifies. Many, particularly in the Global South, shake their heads at the hypocrisy of official society that denounces oppositional violence, and even non-violent activism, while glorifying military and police willing to use whatever violent measures are necessary to ensure healthy bottom lines for corporations. But drawing to the end of its second decade it feels like the era of antiterrorism is starting to fray at the edges. Call it War on Terror fatigue.

Resistance takes many forms from the rolling of the eyes at the latest terror alert to people in the US jamming airports in solidarity with Muslims after Trump’s travel ban was announced – thereby bolstering the federal justices to rule against it.

In Britain people rally to oppose migrant detention centres and arbitrary expulsions. Europeans flock to landing points in Greece and Italy welcoming and assisting fellow humans washing ashore from lands of destruction. NGOs advise Muslim charities on their rights and how to respond if the government lists them as a terrorist group.

Even establishment newspapers set up secret dropboxes to enable security-state whistleblowers, for the future Edward Snowdens and Chelsea Mannings.

Counterterrorism may be losing its mojo but it is still armed and dangerous and threatens the human future. We must not only reject its crude characterization of activism, but also retire that highly selective word ‘terror’ and describe the violence for what it is.

If we do, I think we will find that many of its roots are buried in the practices of the corporate state and predatory economy it services.