From lectern to prison

İştar Gözaydın was a professor of law and politics in Turkey. Until her government decided she was a terrorist. She tells her story. 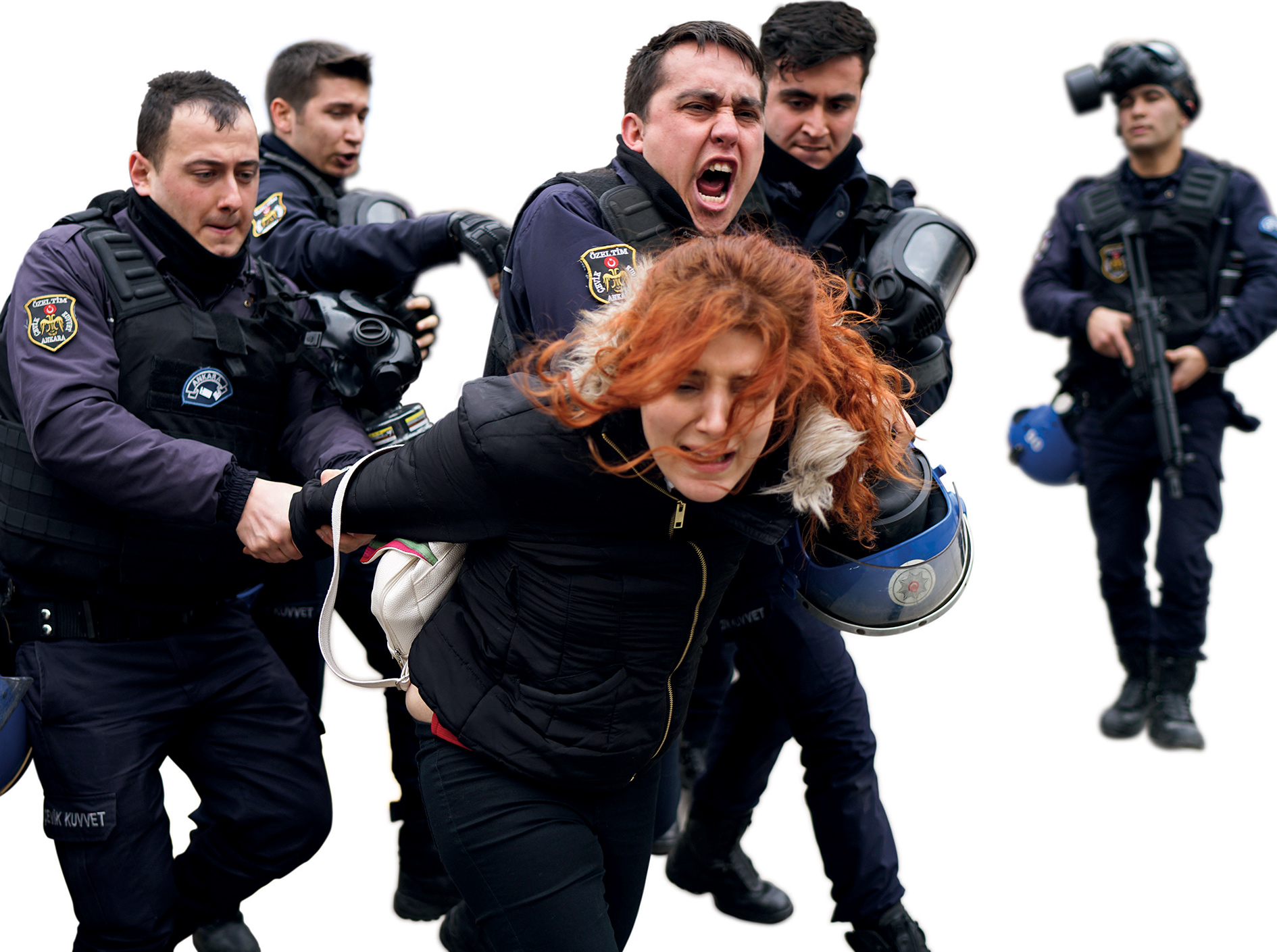 Turkish riot police crack down on people protesting against the purge of academics, outside Ankara University.
Photo: Umit Bektas/Reuters

I am a professor of law and politics and have dedicated most of my academic career to analyzing the relations between religion, state and society. I grew up in an almost non-religious family; I guess this is the source of my fascination, since I was a teenager, with the impact of religion on people. Never religious myself, I have nevertheless always respected all variants of belief or disbelief.

The Turkey in which I was born in 1959 has always been a fruitful laboratory for any social scientist to observe religion. It has also given me several opportunities to serve as a human rights activist – though I have never been a radical.

In my academic work, I have criticized the policies of Turkey’s single-party regime (1923-50), especially in terms of religious repression and the treatment of minorities. I have always rejected the understanding of democracy that allows majorities to ride roughshod over the rights of minorities – it is essential that such rights are protected.

Turkey has always experienced cycles of political fortune, but the past 15 years have seen a series of critical junctures prompting a development in politics that is really quite unprecedented.1

The stunning victory of the Justice and Development Party (Adalet ve Kalkınma Partisi, AKP) in the parliamentary elections of 2002 marked a profound change in Turkish politics. A new political elite arose from a social base that had been mostly neglected since the founding of the Republic in 1923.

The AKP speedily eliminated military tutelage and proposed significant initiatives to empower the citizenry and sustain civil liberties – both important steps towards democratization. But by 2007 signs of yet another fundamental transition began to emerge. The emphasis on democracy appeared to fall away as the AKP’s conservative Islamist discourse intensified. Attempts at constructing a hegemonic authoritarian regime started to appear.

The Gezi Park protests of 2013 marked another turning point, after which Recep Tayyip Erdoğan finally took complete control of the AKP. The violent response of the Turkish authorities to the protests exposed a striking intolerance of opposing voices indicating Erdoğan’s belief that conspiratorial rhetoric is the best way to mobilize support.

The putsch of 15 July 2016 was the most recent, the most dramatic and – arguably – the most consequential event. It has touched every Turkish citizen in myriad ways and its effects will probably be felt in Turkey for generations. I personally experienced this process like no other in my life. At the time, I had been the chair of the Sociology Department at Gediz University in Izmir for almost a year.

This was a particularly rewarding period in my academic career. I remember fondly the intellectual enthusiasm of young colleagues – many of whom had returned to Turkey having completed PhDs at prestigious universities around the world – as well as the intellectual curiosity of the students. Such an environment is sadly all too rare in higher education.

To my utmost surprise, I received an email on 21 July 2016 from human resources informing me that I had been suspended by the rector of the university because of allegedly pro-putsch tweets sent from my Twitter account. I had retweeted four or five tweets after 15 July; however, each was merely a call for rule of law and to stand strictly against violence, including restoration of capital punishment – a proposal that re-emerged in the wake of the coup attempt.

My past criticisms of governmental policies in the media were, I suppose, a kind of pretext for the university to appear sympathetic to the government by making an example of me. In the event this proved pointless; Gediz was one of 16 universities closed by decree on 23 July 2016.

On 5 October 2016, I was heading to an EU project meeting in Sicily when, at the airport, I was informed that my passport had been annulled. At 6.30 am on 20 December, a buzz at the front door of my home in Istanbul marked my own critical juncture.

I was taken into custody in Istanbul and later in the day transferred to Izmir. There, I was detained at Yesilyurt Police Station for eight days with only the clothes I wore and with no book or other reading material. The only thing I could focus my attention on was the box of medication I was immediately given to treat a circulation problem (I have to take this daily). Needless to say, I memorized every word of the pamphlet inside.

I was charged with being a member of an armed terrorist organization – the so-called FETÖ (Fetullah Gülen Terror Organization) blamed for last year’s coup attempt. But there was no evidence to back this allegation.

During the first interrogation, the police googled my name and found several TV programmes on which I’d appeared in my professional capacity. One response I had given about the definition of a terrorist organization was the supposed ‘smoking gun’ for the authorities. I had answered a query as follows: ‘A judicial decision is definitely needed to characterize a structure as a terror organization. It is still debatable, but certainly an administrative decision is not sufficient for an outfit to be named as such.’

This was considered by the Turkish authorities as me advocating for the so-called FETÖ. The female judge who I appeared before with seven others on 27 December 2016 obviously agreed with this opinion. I was formally charged and placed on remand.

I was in jail for 92 days. My cell mates were mostly judges and prosecutors, teachers and academics who had been arrested almost immediately after the coup attempt.

My thirst for reading during my period in custody led me to commit to reading a book every day I was in jail. I really did – some of them one a day, some chapter by chapter. By the time my case was transferred to an Istanbul court and I was released pending trial – 31 March 2017 – I’d finished 92 books.

Like tens of thousands of others suspended or removed from their positions, I struggle with the fact that it is simply impossible – de facto if not de jure – to find employment in Turkey.

My loss, however, is primarily intellectual. All my electronic equipment – including my laptop and backups – was taken by the police and has not yet been returned. With no access to all I have produced intellectually since my 20s I feel like I’ve been lobotomized. Worse still, I cannot travel internationally – a freedom I’ve enjoyed since I was seven months old. True enough, nothing lasts forever; but I am very much afraid that as time goes by, it will not be possible to restore Turkey to a lasting peace.

Whose streets?
How Turkey’s citizens lost their rights