This record about global trade and the Economic Partnership Agreement (EPA) from the viewpoint of Kenyan farmers and others is an important and impassioned focus on real problems and real injustices.

Sven Kacirek has featured in these pages before (NI 442). The Kenya Sessions (2011) was an ethically sound jamming travelogue, during which the German musician met fellow percussionist Daniel Mburu Muhuni. Kacirek had come across the EPA and was curious why Kenya had baulked at the free trade agreement proffered by the European Union to the African, Caribbean and Pacific countries. He soon discovered the reasons behind Kenya’s refusal. Teaming up once more with Muhuni, the two sought out dissenting voices to the EPA and it is these spoken narratives, set to music, that form this extraordinary record.

Testimony comes from diplomats, farmers, civil servants and former NGO workers: they all speak to how an economic model predicated on continual growth cannot aid weaker nations. It’s a pleasure to hear Western politicians called out: ‘Mr Mandelson; he was a terrible man’ – is one of them, the musicians using loops and squawking saxophones to make their urgent point.

In terms of its method, this album has a kinship with Steve Reich’s great work of testimony and music, Different Trains. And like Reich’s masterpiece, it’s a release that every politician and economist should listen to. Costing just €0.50 ($0.59) for a digital download from the bandcamp site below, they have little excuse not to. 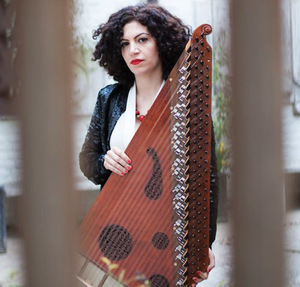 Born and raised in Damascus, Maya Youssef was set for a career as a performer before the Syrian war began in 2011. She had defied convention by swapping the violin in preference to the qanun – traditionally, a man’s instrument – and, excelling, had studied in Dubai before coming to the UK on a scholarship that recognizes exceptional talent. At that point, Youssef was studying for a doctorate and working with refugee children on the side. In 2012, a year after war had started, she describes how the music that makes up Syrian Dreams exploded from her. Her first set of compositions, the album is a direct response to anguish and it sets up music as a life-force which is the antithesis of destruction.

This luminous album might be a response to tragedy but it is also colourful and vibrant, displaying great virtuosity. Youssef’s qanun is both voice and rhythm track. Quiet accompaniment from cellist Barney Morse-Brown, oud player Attab Haddad and percussionist Sebastian Flaig provides a solid basis from which Youssef flies, most impressively on ‘The Seven Gates of Damascus’ – a seven-part suite that expresses the character of each part of the city. The composer includes a few traditional tunes in her Syrian Dreams: combined with her own works, this is a celebration of a culture as much as a holding fast to all that is good.