Our lives, our lands

Amy McQuire on why life and death are inseparable from land for Aboriginal people in Australia. 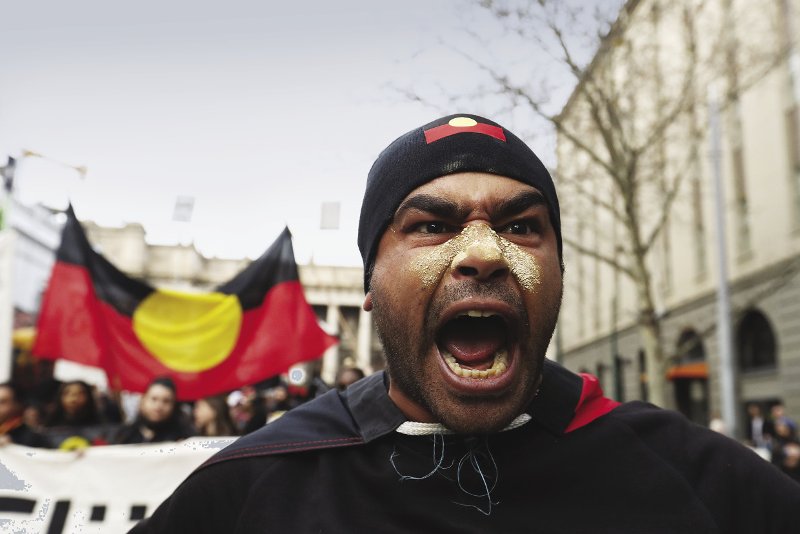 Outrage at a Melbourne protest, July 2017, after the man who ran down 14-year-old Elijah Doughty was found not guilty of manslaughter.
Photo: Robert Cianflone/Getty Images

On the edge of the Western Australian town of Kalgoorlie-Boulder sits the Super Pit, an open-cast goldmine. From the air, the large hole makes the town seem miniscule.

For Aboriginal people it is a wound on our ancestral land. It is a representation of the prosperity ripped from its belly, and the blood that was spilled to clear it.

A short drive from Super Pit is the site where in 2016, a non-indigenous man chased down and killed Aboriginal teenager Elijah Doughty in a dry creek bed, and received only three years jail time for death by dangerous driving.

Two years before what is now known as ‘the death’, Kalgoorlie community leader Pastor Geoffrey Stokes, a Wongathi man who lives and breathes his culture, was driving with his cousin in his traditional country, to go hunting.

For Aboriginal people, our land holds our lifeblood, the connection to our ancestors who held custodianship over it for millennia

When his cousin pointed out a site in the distance and told him there was mining taking place, Stokes was shocked. The area the mining company Darlex was preparing to destroy covered a number of sites sacred to his people, including a songline – one of the ancient tracks that contain the stories of the country, and to which Aboriginal people are tied through their spirituality and science. Stokes is Wati, an initiated lawman, and he had not been told about any mining plans.

Stokes approached the mine workers to voice his community’s objections, only to be ignored.

‘The miners just walked past like I [was] not there… and I shouted and screamed,’ Stokes tells me. ‘Then I thought, “Stuff them, we’ve had 200 years of this.” I grabbed my gun.’ Stokes fired shots into the air.

‘I shot to get their attention,’ he says. The miners say they were in fear for their lives.

For Stokes, like other Aboriginal people, life and country are intertwined. He told me the mining on sacred lands was comparable to a person going out and destroying a church.

‘We as Aboriginal people have not sold this land – this land is still ours. If you are on this land doing what you are doing without permission, you are breaking and entering,’ he said.

While Stokes saw the destruction of his country and sacred sites as a crime, he was the one who was criminalized for protecting it.

He was granted a spent conviction and a fine.

I met Stokes when I was in Kalgoorlie to report on the one-year anniversary of Elijah’s death. Like the acquittal of George Zimmerman, the man who killed US teenager Trayvon Martin, the short sentence sent waves of pain rippling through Aboriginal Australia; people saw Elijah as their nephew, their cousin, their son. The court case sparked several protests across Australia.

During the trial, the man who killed Elijah (his identity was not made public) said that he had believed the teenager was riding a motorcycle that had been stolen from his house. Etched in a tree overlooking the site of Elijah’s final moments is the message: ‘A motorbike can be replaced. Not a 14-year-old life.’

While Australia’s settlers were fine with ‘breaking and entering’ into sacred country to destroy it, the state could not see the devastating irony in valuing property, in this case a motor­bike, over the short life of Elijah Doughty.

For Aboriginal people, our land holds our life­blood, the connection to our ancestors who held custodianship over it for millennia. Rupturing that lifeline and destroying our country means destroying us as a people. If you don’t value our country, you can’t value our life: and in Australia, both are seen as dispensable in the pursuit of profit and protection of property.

Amy McQuire is a Darumbal and South Sea Islander. She is Buzzfeed Australia’s indigenous affairs reporter and worked as a researcher on John Pilger’s film Utopia.

Working class in Britain? You must be white
Six ways to be a better ally