Remain in Light by Angélique Kidjo; Voice of Resistance by Rim Banna. 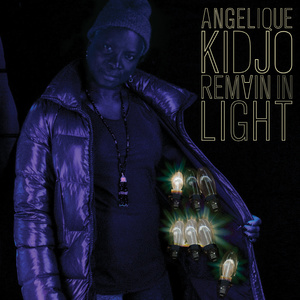 Angelique Kidja – rocking the material in her indomitable way.

A joyousness infuses Angélique Kidjo’s Remain in Light, her reclamation of the Afrofunk heritage that the Talking Heads and their producer Brian Eno used to fuel one of the most critically acclaimed albums of the past 40 years. The background is this: in 1980, Talking Heads, very much leaders of the art-schooled new wave, wrote, recorded and released the original Remain in Light album. Eno replaced the New York band’s nervy guitars with a funk that drew from Fela Kuti: indeed, Tony Allen, Fela’s drummer appeared on this 1980 album as he does on this one. That album’s combination of taut energy, chiefly in the delivery of David Byrne’s vocals, Eno’s electronics and West African-inspired percussions made it a huge hit. However, if the first album was rock goes to Africa, then Kidjo’s response represents the opposite journey.

With producer Jeff Bhasker, Kidjo takes the music back to her native Benin, fills it with even more funk (one of her band is Magatte Sow, the percussionist behind the Black Panther soundtrack) and rocks the material in her indomitable way. Gone are Byrne’s yelping vocals, in place are Kidjo’s swooping cadences. Her re-reading of the original album means that stresses fall in new places, with invigorating results: ‘Once in a Lifetime’ now has an oceanic expansion into a soaring horn section. Lyrics in Fon and Yoruba replace some earlier English ones. A pugilistic ‘Born under Punches’ is stripped to a structure of beats and voice. A triumph. 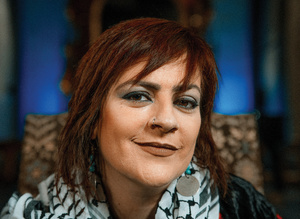 It was Lullabies from the Axis of Evil from 2003 that first brought the dead-too-soon Rim Banna to an international listenership outside her native Palestine and the Arabic-speaking world. Conceived by Norwegian producer Erik Hillestad, Lullabies paired singers and material from countries designated by George W Bush as part of the ‘axis of evil’ with Western singers. It was a ferociously effective way of humanizing the very people who were being rendered voiceless by global politics. Banna, who died in March from cancer, was an artist steeped in the struggle of Palestine. This is a deeply political album in that it raises a powerful, creative voice against injustice, oppression and occupation. For an album whose making took place as a fight against time – Banna began writing and recording the material in 2015, even as her vocal cords began to fail – this is a powerful album that sings, beautifully and urgently, of love, life and defiance.

Banna uses a trusted team: Hillestad produces, while music, beats and sound structures are provided by the Norwegian jazz pianist Bugge Wesseltoft, with the electronic sonic artists’ collective Checkpoint 303 creating the sound of – literally – a body politic via the sonification of Banna’s medical data. Sonification of ordinarily inaudible data is a technique not uncommon in experimental music, and the Checkpoint team employ it to create sounds that Banna could set her poems and lyrics to. It’s deeply moving: ‘I am trying to fight against the sickness of the cells like I am fighting against occupation,’ Banna says (in English) on ‘I Don’t Care’. Wesseltoft’s pointillistic piano, Checkpoint’s focused atmospherics and Banna’s spare Arabic poetry make this a defiant and elegiac farewell.