If we all became vegan tomorrow

Emboldened by a recent study, The Guardian repeats the myth that becoming vegan is the ‘single biggest way’ to reduce your impact on Earth. Chris Saltmarsh and Harpreet Kaur Paul disagree. 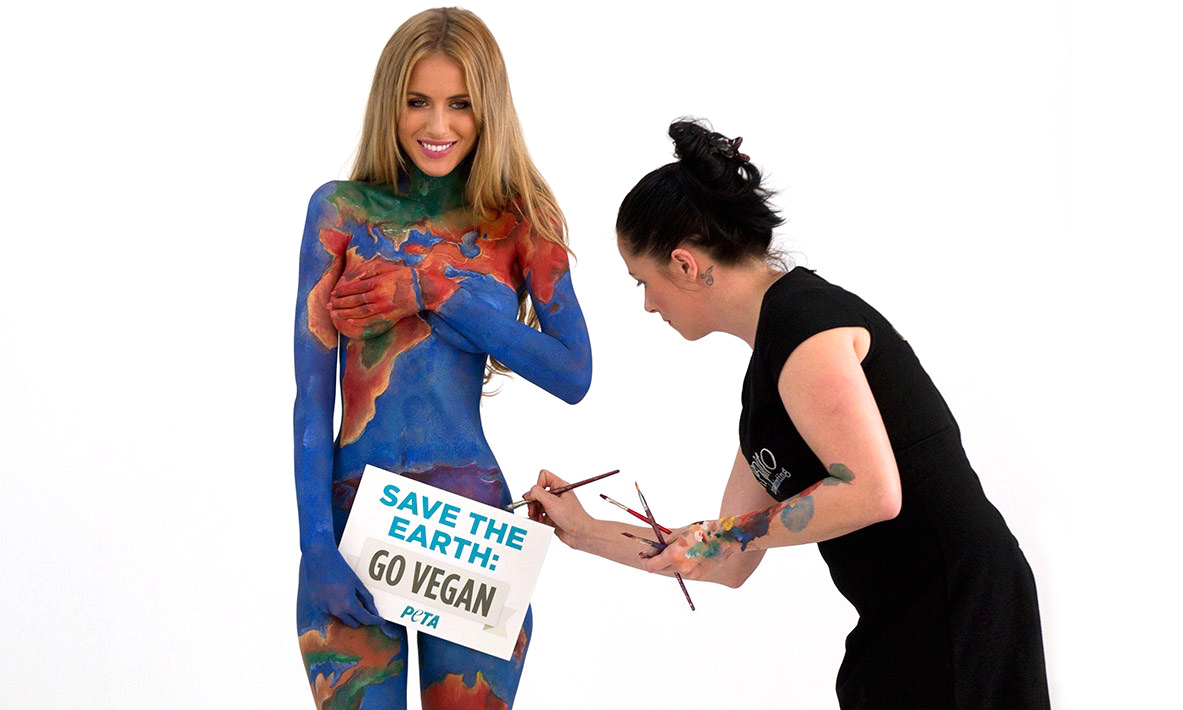 Artist Jade Little touches up body paint on model Renee Somerfield, as she poses with a sign reading 'Save the Earth, Go Vegan' for an advertisement by People for the Ethical Treatment of Animals (PETA) in Sydney 3 July 2014. PETA's ad campaign claimed that animal agriculture is one of the leading causes of climate change and a major contributor to resource depletion, pollution and world hunger.
Photo: REUTERS/Jason Reed

If everyone became vegan tomorrow, between 14.5 to 15.6 per cent of anthropogenic (human-made) global greenhouse gas emissions would be wiped out. That is huge. You would be forgiven if you thought it was higher, as a recent viral Guardian article, based on a new study out from the University of Oxford, sensationally reported that meat and dairy accounted for 60 per cent of agricultural greenhouse gas emissions, without stating the proportion of global anthropogenic emissions attributable to agriculture specifically.

With a current global average surface temperature increase of approximately 1.2°C, climate change has already caused harms, and any reduction in emissions would curtail further damage. Land currently used for meat and dairy production could be reforested, grains fed to cattle could be directed, water would be saved, and environmental damage caused by animal agriculture would cease.

While noteworthy, prioritizing dietary solutions is not only insufficient, but problematic. Imposing veganism on the majority world would hurt the rural poor. A survey of 7978 households in 24 countries across Latin America, Asia, and Africa, found that reliance on wild meat is highest among the poorest households and fills a gap when other food sources are not available. Many traditional and indigenous cultures surviving in relative harmony with natures have hunted meat sustainably long before the capitalist industrialization of agriculture. They’ve done so often with a profound respect for the animal and their role in the co-production of natures.

Climate change does not exist outside of our current social, economic, political and cultural systems. It magnifies existing patterns of inequity. Climate harms disproportionately affect groups and peoples already experiencing social, political and economic exclusion. Last year 24 million people were displaced by weather related disasters like floods and hurricanes. While financial losses will amount to billions (USD) by 2050, non-financial losses, which include cultural ways of being in our immediate environments, will be irreparable.

Changing your shopping list – no matter how radically – will not solve these systemic problems. Thatcher said ‘there is no society’. Individualist ‘solutions’ to climate change – like prioritizing veganism – support this myth. We need to restructure our economy away from fossil fuel reliance and improve livelihoods as we do it.

What then about the majority (85.5-84.4 per cent) of the remaining greenhouse gas emissions? There are two primary culprits. First, fossil fuel companies. They profit from the oil, gas and coal that we all know must stay in the ground, and frequently with disregard for human rights and indigenous land sovereignty. Exxon and Shell knew as early as the 1960s that their extractivism would cause devastating climate impacts like extreme weather events on the US’ east coast. Shell even predicted civil society uproar, and litigation such as that recently brought against them by Friends of the Earth Netherlands. They knew what they were doing. They predicted the consequences of prioritizing profit over people and planet. They continued nonetheless, with the support of governments.

Governments then are also equally responsible for their failure to regulate and for their enthusiasm to subsidize the fossil fuel industry. We’re not just talking about Trump’s deregulation and fossil fuel infrastructure bonanza. The UK continues to impose an unpopular fracking industry on Northern communities. Justin Trudeau’s Liberal Government in Canada is using USD $4.5bn of public money to rehabilitate the Trans Mountain tar sands pipeline without the prior consent of First Nations. The EU uses the European Commission’s Projects of Common Interest programme to lend political and financial support to the creation of an unnecessary new gas industry spanning Europe. Companies and governments are supported by banks. For example, HSBC and Barclays both spend billions underwriting companies leading on expanding oil, gas and coal extraction globally. Without their finance, these projects simply couldn’t happen.

Governments in the Global North have experienced benefits from fossil fuel supported economic growth, from infrastructure, high standards of living, technology and strong adaptive capacities. These benefits have come at the expense of communities in the majority world, who are disproportionately impacted by our governments’ enabling greenhouse gas emissions. In response, communities on the front lines of climate impacts are actively attempting to redress harms already occurring, whether from crop failure as a result of saltwater intrusion, sea level rise, or displacement to allow for dirty oil pipelines. Despite dangerous repercussions, activists in the majority world fight environmental and climate injustice daily. Defending the environment has become increasingly deadly as 197 environmental activists, wildlife rangers and indigenous leaders trying to protect their land were killed in 2017. We need to act in solidarity with them, as a collective.

The Paris Agreement (2015) recognized the grave risks climate change poses to people and the planet. It seeks to keep global warming below an average of 2°C and to ‘pursue efforts’ to limit the increase since preindustrial times to 1.5°C. Around this time last year, on 17 May 2017, scientists estimated that we were likely to have emitted our carbon budget for 2°C warming by 19 May 2037. But based on emission trends over the past 20 years, they now estimate that we will release a trillion tons of carbon dioxide a whole year earlier, by 2 May 2036, resulting in warming of at least 2°C. We’re speeding towards climate disaster.

Scientists have argued that it is possible to move towards 100 per cent renewable energy by 2030. We can ban all new fossil fuel extraction and infrastructure. Divest state subsidies from fossil fuels, and invest in renewable energy that is produced ethically, without displacing indigenous peoples or violating workers’ rights. We can invest in research and infrastructure to lock the economy into renewables (the opposite of carbon lock-in) and we can get countries in the Global North – responsible for more than three times as many greenhouse gas emissions between 1850 and 2002 than developing countries ( which host a much larger proportion of humanity, approximately 85 per cent) – to revise their mitigation targets upwards.

The Guardian’s headline reports on the Oxford study by stating that ‘Avoiding meat and dairy is “single biggest way” to reduce your impact on Earth.” But we disagree. Although cutting out meat and dairy from your personal diet would have an important impact on reducing greenhouse gases, the facts suggest that there are bigger and far more effective ways to make a difference.

These ways include: starting fossil fuel divestment campaigns and getting your employer, local authority and university to invest responsibly is one way. Organizing in your community for a cooperatively owned and operated municipal energy company to embrace renewables and eliminate fuel poverty. Becoming active in your trade union and developing policy supporting a just transition toward renewables. Making links with fossil fuel workers and getting them on side. Campaigning for banks like Barclays to stop providing corporate and project finance that enables further fossil fuel extraction. Joining the many front line resistances blockading new infrastructure like anti-frackers and resisting gas fields. Starting litigation or supporting those that have already brought challenges against complicit governments or companies.

Harpreet Kaur Paul is a PhD Candidate at the University of Warwick's Law School, her research focuses on climate justice for loss and damage.