Ten years ago the world focused on the US foreclosure crisis as thousands lost their homes in dodgy mortgage deals. Today, the crisis is still a reality for many. Jack Crosbie reports. 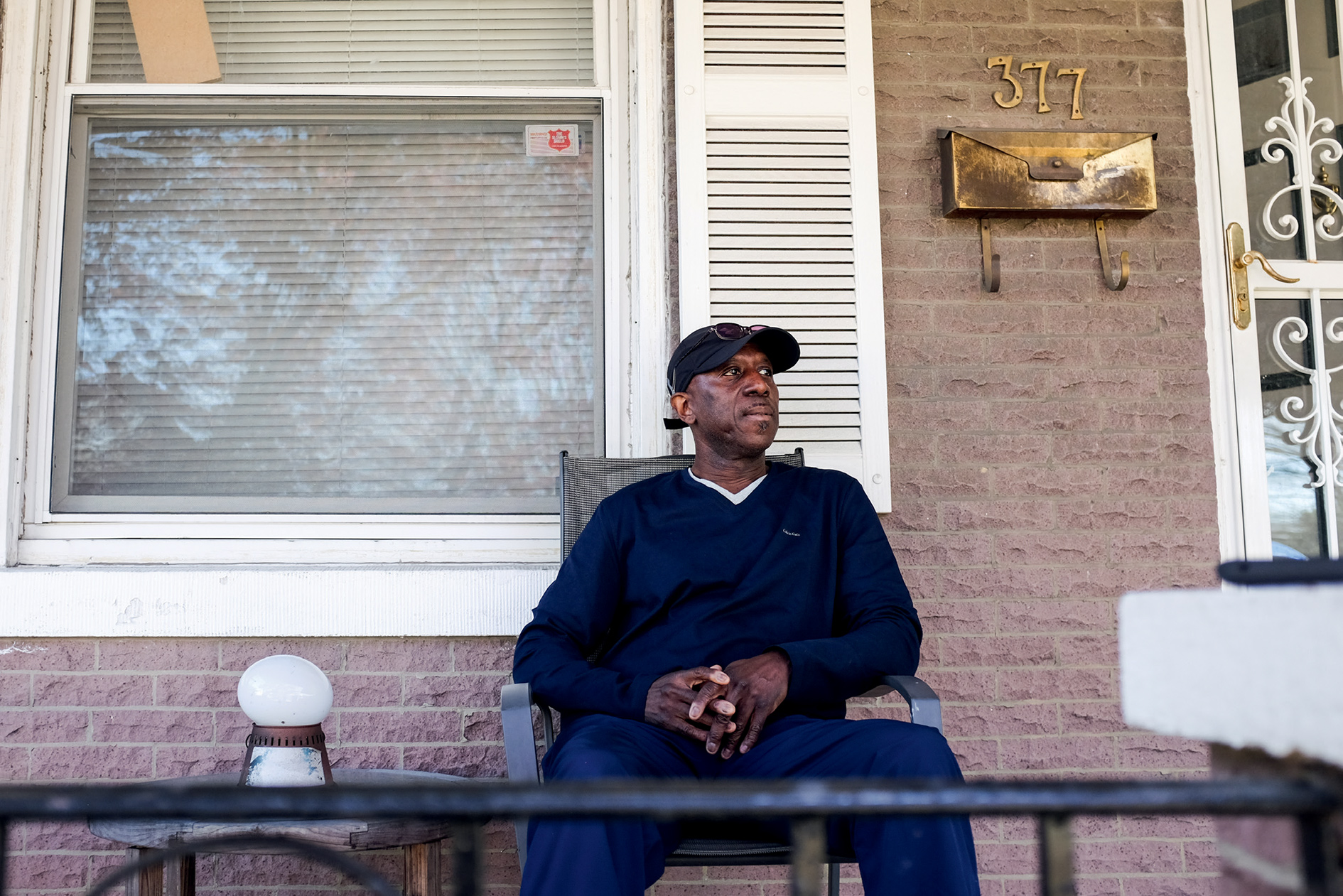 Julius sits on the porch of his house in Trenton, New Jersey, looking north at Ewing Township where foreclosure rates are drastically lower.
Photo: Jack Crosbie

Julius Gallishaw lives in the left half of a maisonette on a nice, safe street in Trenton, New Jersey. It has windows on three sides, which means sunlight streams through in the mornings and evenings. Looking north, he sees a splash of deep red, the top of his prized Japanese maple tree. Julius is proud of his house. And for the past three years he has been in a desperate fight to stop his bank from taking it away.

It’s been 10 years since the height of the subprime mortgage crisis, which sent the country spiralling further into the most severe recession since the Great Depression. Many areas have ‘recovered’ but in cities like Trenton, the crisis is still raging.

Julius and Ellen bought their house for $125,000 in 2002. It was a stretch but they financed the purchase with a high-interest mortgage from Wells Fargo, a bank that would later be bailed out for $25 billion by the Federal Reserve. The house was spacious, with three floors for their sprawling family: two adult sons from separate partners earlier in life, who gave them five grandchildren, all clamouring for space and care and love.

The interest rate was steep, so Ellen, who had better credit, took out her pension for the down payment. For almost 13 years, nearly half of their 30-year married life, they made it work, weathering the housing market crash and steadily paying off the mortgage, thanks to their dual income. That dual income was important, because the house, they discovered after they’d gone through all the paperwork, wasn’t quite worth $125,000 – other properties in the neighbourhood were going for prices in the $60,000-range.

‘It felt almost like predatory lending,’ Julius says. ‘You know, we bought a house that wasn’t worth it. Ok, now we got it. But with the two incomes, we managed – we didn’t [think] that we were going to pay it off. We just figured we would leave it to the kids.’

When they bought it that didn’t seem like a crazy idea. If you look at a graph of housing prices in the early 2000s, it’s basically a straight line up. Banks and lending organizations were lending money to anyone who would take it, regardless of their ability to pay it back.

These offers were tantalizing to millions: working class people of colour searching for a way out of urban centres, lower-middle class families trying to stake their claim on a tangible future, and even the somewhat-rich, stretching their salaries for a second or third house. Home ownership has been sold as an integral part of the American dream for centuries. Julius and Ellen were chasing an ideal sold to them over generations and, for 13 years, they had it.

But in 2015, Ellen started feeling sick. She had vertigo, double vision, problems with her short-term memory. Driving home, she knocked over one of the decorative planters underneath Julius’s Japanese maple. A string of hospital visits followed, as did a series of inconclusive tests. And then, one day, she was gone: while trying to leave the hospital with Julius, she suffered a massive heart attack and died.

Ordinary citizens are never deemed too big to fail

‘I always thought I’d be the one to leave before she did,’ Julius tells me. After Ellen died, he sank into grief, finding it hard to do much more than leave the house and go to work. When he was laid off from his long-time position at a chemical inspection company later that year, things got worse. Soon, he was behind on the mortgage, car insurance, payments – more money was going out than was coming in, but it still wasn’t enough for the banks. ‘I’m the one having to make the decisions, and there was so much coming at me that I really couldn’t think.’

In the height of the crisis, when people started defaulting on their loans, banks packaged and sold their debt to investors looking to cash in. Homeowners would call up their bank to make a payment, and be told that they owed the money to some other entity. It got so confusing that homeowners would be trying to save their homes from foreclosure, unsure who they needed to pay to save them. They offered people like Julius the chance to ‘restructure’ loans, turning a 30-year mortgage into a 40-year one, something that is designed to suck more money out of the homeowner, according to Peter Rose – managing director of ISLES, a Trenton-based non-profit that offers foreclosure assistance and counselling.

‘The banks have never, for one minute, spent a dime of their own money on solving this crisis that they created,’ Peter says. ‘In fact they’ve made out both ways. They made money by selling the mortgages into crap they knew was garbage, and then they made out when people went into foreclosure because they got made whole on a property that wasn’t even worth a fraction of what it was purchased for.’ In other words, banks were more than happy to loan buyers as much money as they wanted, allowing them to overpay for properties whose values rapidly shrunk. Julius’s house is worth a fraction of what he paid for it but the bank is still coming for the full amount.

In Trenton, the average value of a home is $46,720, according to real estate listing website Zillow. If you pick a point and scroll out, blue and red dots start popping up like weeds in the first weeks of spring. The blues are houses under foreclosure; the reds are ones that have already gone to auction. Across the road, on the other side of the park in Ewing Township, a municipality that is 63 per cent white, the average home value is $180,807. These contrasts, the racialized border between who’s good with the banks and who isn’t, are all over America, and they were intensified by the subprime crisis; African-Americans were estimated to have lost 50 to 60 per cent of their wealth as a result of the housing bubble.

Ewing hasn’t escaped unscathed; New Jersey overall was hit hard. In 2009, when the housing crash bottomed out, the state reported over 70,000 new foreclosures. But in Trenton, and even in Ewing, and many other townships and cities across the state, the foreclosure crisis is alive and well. In 2017 alone, the state reported close to 60,000 foreclosure notices, auctions or bank repossessions. If Julius loses his house, which he still might, the starting bid will be somewhere around $36,000.

But for now, he’s decided to fight. A caseworker at ISLES put him forward for a last-ditch, federally funded assistance programme, Jersey Home Saver; if he’s accepted, this will help bring him up to date on his mortgage payments. Julius tells me that Elena Hung-Shim, his caseworker, thinks he has a ‘pretty good shot’ at being accepted.

According to Hung-Shim, the crisis in New Jersey traps homeowners like Julius – and more vulnerable ones like seniors no longer able to work – in a cycle of debt. In the depths of the financial meltdown, banks received billions in bailout money, but the ordinary citizens in Trenton are never deemed too big to fail. Julius has a good chance with the Home Saver programme because he has a new, full-time job with a chemical company; but Hung-Shim tells me the state regularly denies applicants who can’t prove they’re working. If Julius got laid off tomorrow (which he says is unlikely, fortunately), his family home would be gone in a blink.

‘If this goes through, I have the opportunity to ride off into the sunset a little bit,’ Julius says. But he’s still on the hook for that original $125,000 that he and Ellen paid for the house, so many years ago. ‘I believe this is my last hurrah with it,’ he said. ‘I’m in a good place now. We’ll just wait and see what happens to it.’

Jack Crosbie is a writer and photographer based in New York City.

War of words
Inside the post-truth laboratory