How to make housing a human right

In cities such as New York, San Francisco and Los Angeles, working people have been all but priced out, pushed into ever more distant fringes and suburbs. Mark Engler explores solutions. 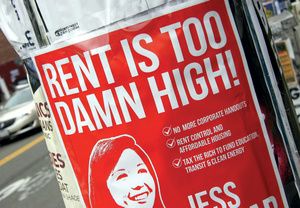 Back in 2010, an eccentric local politician in New York City went viral. Jimmy McMillan had little political experience, a bizarrely sculpted beard, and no backing from any major party. But he had an electrifying slogan that, for a time, made him a celebrity. In debates, McMillan would exclaim simply and forcefully: ‘The rent is too damn high!’

The declaration continues to resonate.

In April, the Trump administration proposed tripling the maximum amount that low-income families receiving housing subsidies could pay in rent – a change expected to affect some two million families. But while the move is a cruel blow for this vulnerable group, the country’s crisis of affordable housing goes much deeper.

In cities such as New York, San Francisco and Los Angeles, working people have been all but priced out, pushed into ever more distant fringes and suburbs. It has become routine to see families spend 40 to 50 per cent of their total income on cramped apartments – some complete with amenities such as lead-painted walls and leaky ceilings in place of showers.

So what’s the solution?

In the past two years, a movement known as the YIMBYs has gained notoriety, especially in California, advocating for more rapid construction of housing units. Their name stands for ‘Yes In My Back Yard’.

Supporting greater urban density, YIMBYs counter the traditional ‘NIMBY’ attitude of homeowners’ groups, which often try to block new developments because they are worried that the construction will be a nuisance or that parking will become more difficult.

The catch is that some YIMBYs – and particularly high-profile leaders – possess a misplaced libertarian faith in the market.

These YIMBYs believe that increasing housing supply, in itself, will ease the pressures of high demand and improve affordability. Backed by tech tycoons and wealthy real estate developers, they demonize community groups with legitimate concerns that freshly built luxury condos can end up speeding displacement of a neighbourhood’s long-time residents in favour of newer, whiter arrivals.

And yes, luxury condos are invariably what developers have in mind.

Fortunately, a new group known as PHIMBYs – ‘Public Housing in My Back Yard’ – has advanced a broader vision of what a pro-housing movement should look like.

‘Development capital and their investors are not in the businesses of housing people,’ argues Shanti Singh, a leading PHIMBY. ‘They’re there to make a profit.’ After all, the market is arguably happier to sell a new condo to speculative international investors looking to park their cash than to someone in need of an actual home.

Expensive new apartments can improve a region’s overall housing supply and eventually allow more affordable existing units to ‘filter’ out to new tenants. Yet studies show that this can take decades.

In the meantime, lower-income residents still waiting for all of neoliberalism’s other trickle-down promises are stuck commuting to work from distant latitudes.

As an alternative, a recent report by the People’s Policy Project argues for a ‘public option’ of direct investment in affordable housing. ‘[F]ar too much time and money has been spent on trying to coax private markets’ into meeting public-minded aims, the paper states. Having municipal governments construct a large number of housing units could accomplish this ‘better, faster, and cheaper’. Unlike traditional US public housing, all residents could apply to live in these new buildings. Rent would vary, based on ability to pay – with lessons drawn from municipal and social housing experiments in places like Vienna.

Urban density is a good thing, but a real housing solution will require a critique of the market that the YIMBYs don’t have. Coupled with rent control, anti-eviction protections, and requirements that new private developments include a percentage of affordable units, a public housing boom could turn too-damn-high rents into merely annoying ones – and someday maybe even make the promise of housing as a human right a reality.

Mark Engler’s latest book is entitled This Is An Uprising: How Nonviolent Revolt Is Shaping the Twenty-first Century (Nation Books). He can be reached via DemocracyUprising.com

Reasons to be cheerful
Is the ‘Data Mafia’ here to stay?