Why is hunger growing in a country known as an agricultural powerhouse? Amy Booth reports from Buenos Aires. 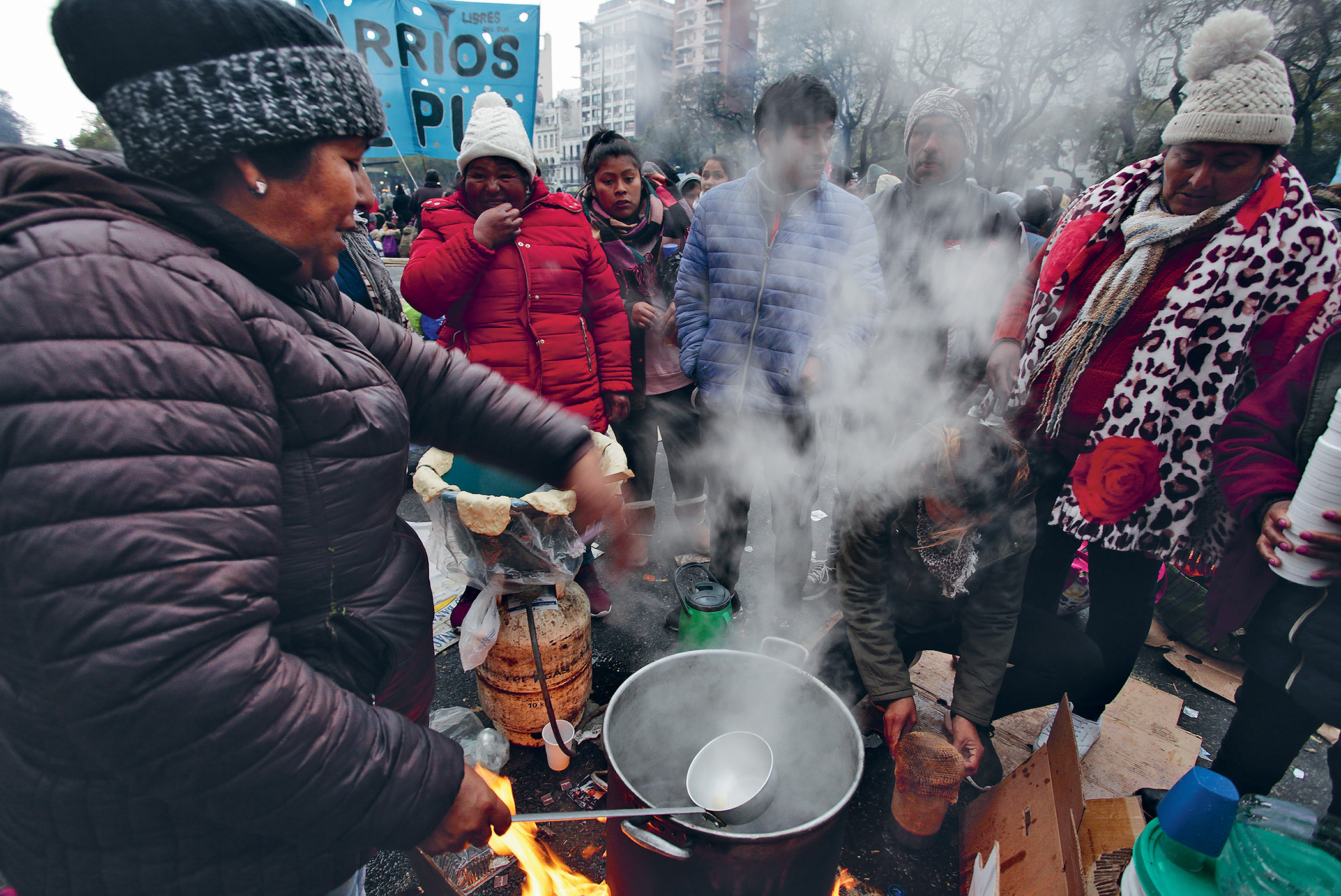 Protesters against Argentina’s hunger crisis gather for a brew, 5 September 2019. They had camped out overnight in front of the Ministry of Social Development in Buenos Aires.
Photo: Carol Smiljan/NurPhoto/PA

It’s cool outside, but the kitchen is almost unbearably hot and sticky. Two volunteers in black aprons are deftly peeling butternut squashes while another uses a huge wooden spoon to stir a pan as tall as her thigh.

This is the community canteen run by gastronomical co-operative El Genesis in Buenos Aires. Operating from the kitchens of workers’ movement CTEP, the volunteers cook food here three times a week, for those who can’t otherwise afford to eat. It’s one of Argentina’s many volunteer-run soup kitchens, known as comedores populares.

‘If I have lunch, then I can’t have dinner,’ explains 73-year-old Stella Caliba, who has been coming to the canteen to supplement her meals for several years now. She hasn’t always depended on the comedor but times have got harder – she suffers from venous leg ulcers, and the costs of rent and medication are high. ‘Before, I was able to afford treatment,’ she says. ‘Now, I can’t. Medicine is very expensive.’

When the canteen first opened, it fed around 250 people each day – they were society’s most vulnerable: street vendors and people who scraped a living doing odd jobs. But now around 1,000 enter its doors daily, including a growing number of middle-class families who can no longer make ends meet.

This is due to a deep financial crisis that has pushed millions below the poverty line.

What rankles with many people is their country’s reputation as an agricultural powerhouse. Argentina can produce enough food to feed its population several times over. How can there be such acute hunger?

There’s no simple answer, but the forces of globalization, debt and the peso-dollar exchange rate all play an important part.

Argentina has long been plagued by inflation, its economy idling. But in 2018 it reached crisis point. No single factor sparked the decline, but observers have pointed to a drought – which reduced agricultural production and export earnings from soya in particular – and the global trend of investors pulling out of emerging markets. In mid-December 2017, there were around 18 Argentine pesos to one US dollar. Two years later the exchange rate had rocketed to 60 pesos to the dollar.

Workers’ pay has gone up in the interim, but the pay rises have fallen far short of spiralling inflation, which was running at over 50 per cent during 2019. The peso’s collapse against the dollar meant the minimum wage reached a low in dollar terms of $242 in August 2019 whereas four years earlier, just before centre-right neoliberal President Mauricio Macri came to power, it had been worth $601.

When the dollar rises so dramatically against a country’s local currency, it pushes up prices in several ways. First, wholesale contracts for many imported foods are agreed in dollars, so a drop in the value of local currency means they spiral out of reach of the consumer.

Second, even if the food itself is not imported, the inputs required to grow it – such as fertilizer, herbicides and machinery – may have to be, which makes even local food more expensive for farmers to produce.

When agricultural producers can charge global market prices abroad even as ordinary people’s purchasing power is slipping away at home, it pushes domestic prices up.

Currency differentials directly affect the price of agricultural products grown in Argentina in other ways too. With prices of agricultural commodities like wheat, corn and soya set on international markets, they become disconnected with what it actually costs to produce them.

‘The price of soya is determined in Chicago,’ explains Martín Burgos, co-ordinator of the economics department at the Floreal Gorini Cultural Centre for Co-operation. ‘It’s dollarized because it’s exported. It depends on the international price. Many input costs are dollarized too. More of the costs have to be shifted into the end price. If the dollar goes up, the price of food goes up.’

If agricultural producers can charge global market prices abroad at a time when ordinary people’s purchasing power is slipping away at home, it pushes domestic prices up.

What’s more, price rises in shops don’t always reflect price rises further up the supply chain, according to Andrea Sosa, who researches agribusiness at the National University of San Martín. When retailers see that the dollar has risen, they raise their prices speculatively. She attributes this to a sort of ‘mental dollarization’, the legacy of Argentina’s long history of inflation problems.

Argentina’s hunger problem isn’t just about the effects of the international market. Burgos says the major problem is meagre salaries and rising unemployment plunging the population into poverty.

But the issue of food sovereignty is also pressing, says Sosa. Big landholders are accumulating more and more land and planting crops based solely on export profit margins, with little regard for the impact on food security at home. ‘If there is no regulation of what is produced, everyone will want to produce whatever brings [foreign] currency,’ she says.

Often, crops that bring in currency are not for direct human consumption. The country’s largest agricultural export is soya, much of which is used as animal feed. Argentina also produces grains for biofuel.

Sosa explains that in the early 1990s, neoliberal reforms brought an end to state bodies that until that point had regulated production and exports, putting more power in the hands of big agribusinesses. ‘It’s an ultra-liberal model where there are no controls on how land is used, there are no controls on the export of grains,’ she says. ‘There is no state policy about how those products reach people.’

The pincers of debt

So, why does Argentina continue to sell its crops abroad when there’s hunger at home?

Argentina is currently contending with $285 billion of external debt, including most of a record $57-billion credit line agreed in mid-2018 with the International Monetary Fund (IMF).

International debt has an ignominious history in Latin America. Advocated as a way for countries to finance projects that will foster their long-term growth and combat balance-of-payment problems, debt all too often becomes unsustainable, leaving governments in sway to creditors and cutting to the bone to meet their obligations. In countries including Chile and Argentina, murderous military dictatorships brought in neoliberal economic policies against the backdrop of debt. Many have questioned whether it would have been possible to implement them in a democracy.

Little wonder that the 2018 IMF deal in particular was met with bitter protest. The country experienced a horrific financial crisis in 2001 and 2002, when the government defaulted on $93 billion of debt – the biggest sovereign debt default in history, at that time. The IMF was widely blamed for worsening the effects of the crisis on the country’s most vulnerable. So when Macri turned back to the Fund, Argentinians knew what to expect: a devastating series of ‘adjustment’ measures: austerity, with the axe falling heaviest on the state. Sure enough, in September 2018, Macri announced that government ministries would be cut from 19 to 10.

The recently elected centre-left president Alberto Fernández is walking a tightrope, trying to help the poor while staving off economic collapse. He has a miserable set of options: defaulting would be catastrophic. He has said he may ask the Fund to not pay out the cash it hasn’t released so far. While Argentina remains trapped by debt, it is hard for any president to come up with a long-term vision. ‘The only way to pay the debt is to generate foreign currency. And how do you do that? With natural resources,’ says Sosa.

One way of softening the blow of the rising dollar on food prices is to tax exports, which Fernández did in December. This allows for goods to be sold domestically at a cheaper rate. But taxing agricultural exports in Argentina comes with risks. In 2008, the agricultural sector exploded into protest when left-leaning president Cristina Fernández de Kirchner tried to increase export taxes. Farmers blocked major roads and clashed with police in a dispute that lasted for four months, and the new tax system was voted down.

The state has also attempted to control prices directly. In April 2019, Macri’s government froze the prices of essential foods such as cooking oil, pasta and rice but the price-controlled products were often sold out or simply not on sale in supermarkets.

Alberto Fernández, who became president in December, has already started to implement his campaign promises of fighting hunger with the roll-out of food-credit cards for needy families. Ultimately far wider-reaching measures to strengthen Argentina’s food sovereignty, including support for small farmers, are needed.

But, says Burgos: ‘If you have the macroeconomic situation completely out of control, it’s very difficult.’

Without radical action on the debt trap, Argentinians will continue to rely on comedores to eat.

Amy Booth is a freelance journalist in Buenos Aires. Her work focuses on society, politics and human rights in Argentina and Bolivia. When she isn’t reading or writing, she can be found swinging from a trapeze.

Action on Poverty
A brief history of impoverishment