Tax havens in the Global North enable the systematic looting of the Global South. John Christensen explains how their activities impoverish the world. 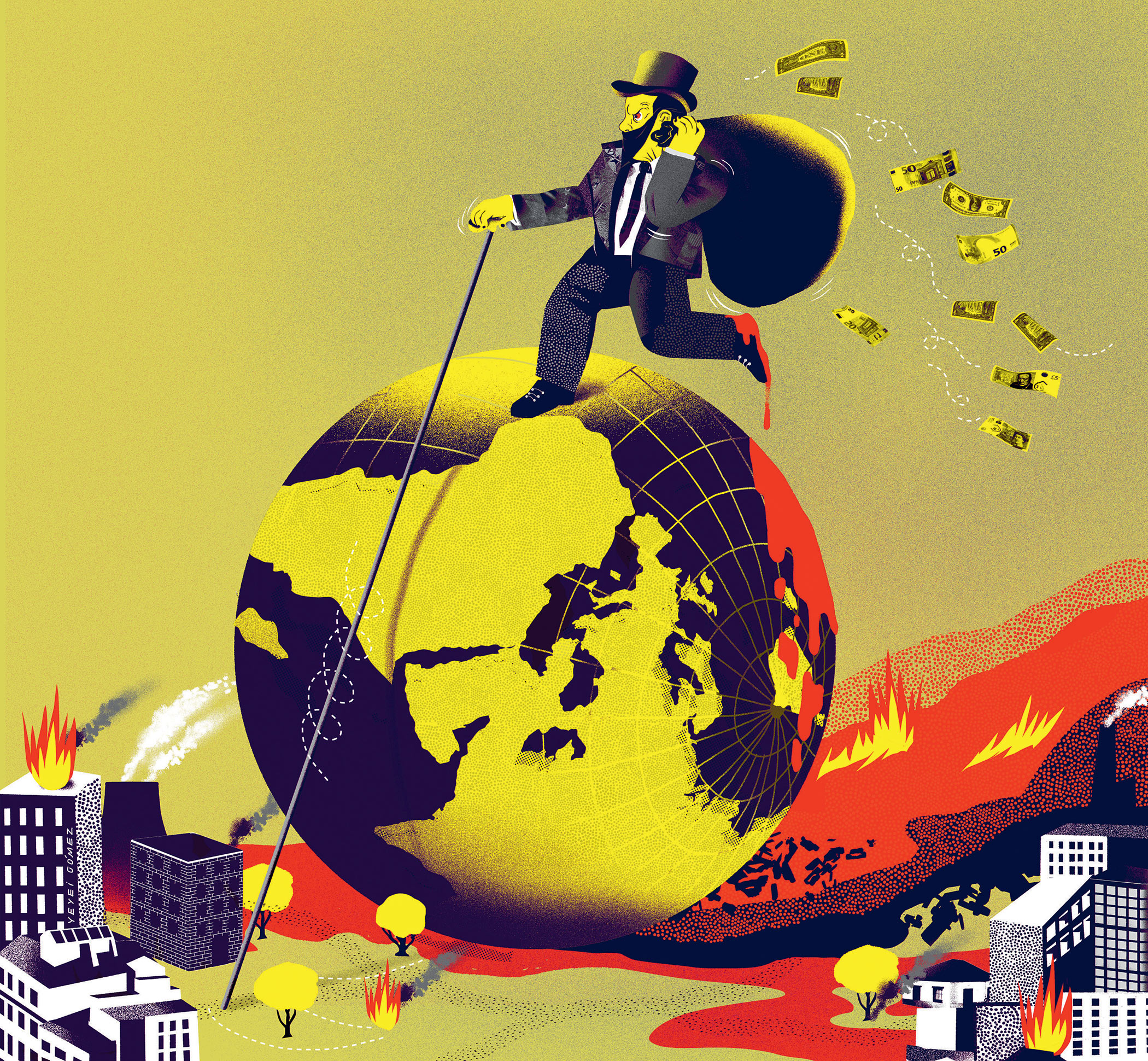 In the mid-1980s I went undercover to investigate the role of tax havens in the newly globalizing economy. My research saw me return home to Jersey, in the British Channel Islands, where I took a job with one of the Big Four accounting firms, working in their offshore company administration division.

One of the companies I administered was a Jersey-registered subsidiary of a giant transnational oil company, which was the lead upstream operator of a medium-sized oil field in the Delta region of Nigeria. Every month, the Jersey-based company issued an invoice of between $0.5 and $1.5 million to the Nigerian-based operating company for ‘engineering consulting services’. Once the payments had been received at an offshore bank account in Saint Helier, I arranged for them to be transferred via a Swiss bank account held by a Bermudian trust, which subsequently paid on the money to three shell companies in the British Virgin Islands.

This process went on, month after month, year after year. I have no way of knowing what happened to the millions of dollars that disappeared into those secretive shell companies in the Caribbean. I can only guess that they might have been kickback payments to senior officials in the Nigerian oil company, or they might equally have been the proceeds of embezzlement by oil company executives. One thing I know for certain: no engineering consulting services were being provided by the Jersey-based company.

Switzerland, the US and the UK have been at the forefront of enabling systematic looting of oil and mineral resources and of the syphoning of proceeds of embezzlement and fraud

Years later, in September 2006, I gave a paper at a Royal Geographical Society conference in London on the geography of corruption. My comments were blunt: ‘Tax havens provide a “corruption interface” between the illicit and licit economies. They distort global markets to the disadvantage of innovation and entrepreneurship, slow economic growth by rewarding free-riding and mis-directing investment and increase global inequality. The corruption interface functions through collusion between private-sector financial intermediaries and the governments of states which host offshore tax haven activities. The majority of these states are major developed nations and their dependent territories.’

In my paper I hit out at Transparency International’s famous Corruption Perceptions Index, noting that while it ranked Nigeria, and other African countries, among the ‘most corrupt’ players, it also ranked notorious secrecy jurisdictions like Switzerland, the UK, Luxembourg and Singapore among the ‘least corrupt’. Something was clearly wrong with this picture, I argued; indeed, the very notion of corruption had been corrupted in ways that suit the interests of powerful elites. It was time, I suggested, to press the reset button and see corruption through the lens of its victims.

In October 2009, the Tax Justice Network, which I was instrumental in founding, published an alternative measure, called the Financial Secrecy Index, which explores how tax havens adapt their laws and regulations to protect their criminal clients from investigation. The secrecy given to clients comes in many guises, including shell companies, offshore trusts, bearer bonds, anonymous bank accounts, nominee company directors, and minimalist accounting and reporting standards; and it involves legions of lawyers, bankers, accountants and other ‘enablers’. The Panama and Paradise Paper leaks, in 2016 and 2017 respectively, revealed the tip of an enormous iceberg of corrupt practices that have permeated every aspect of the global political economy.

Since its first publication in 2009, the Financial Secrecy Index has ranked Switzerland, the United States and the UK at the top. These countries have been at the forefront of enabling the systematic looting of oil and mineral resources and of the syphoning of proceeds of embezzlement and fraud, via tax havens, to the financial markets of London, New York and Zurich. While it is not possible to accurately measure these secretive cross-border flows of dirty money, it is estimated that outflows from the Majority World are in the region of $1 trillion annually, roughly 10 times the volume of development assistance flowing in the other direction. Very little of that illicit wealth returns to its source, with much of it being used to buy real estate and luxury assets in the Global North.

A long history of plunder

Offshore secrecy is a long-established phenomenon; bankers in Geneva and Zurich were catering to wealthy French and German elites long before the creation of the Swiss federal state in 1848. Delaware started to function as a tax haven in the late 19th century.

But a new, more hyperactive phase of the offshore financial economy began in the mid-1950s with the creation of the London-based Euromarkets. As huge sums of petrodollars and other footloose financial capital accumulated offshore, the City of London and its spider’s web of satellite tax havens, including Bermuda, the British Virgin Islands, the Channel Islands, Gibraltar, Hong Kong, and other centres, provided the basis for the emerging offshore financial transnationalism. Decisions relating to the management of this capital are largely taken in major financial centres like London, New York, Luxembourg, Zurich, Frankfurt and Tokyo, but – mainly to avoid taxes or financial regulations – the transactions themselves are booked through a variety of offshore jurisdictions purposefully set up to operate as tax havens.

Tax havens in this context are defined as autonomous or semi-autonomous jurisdictions offering weak regulation, low or zero taxation on non-resident income and capital, secrecy facilities for banking or corporate or trust ownership, and non-existent or ineffective information exchange treaties with Majority World countries. Secrecy is typically a key attraction, and the term ‘secrecy jurisdiction’ is frequently used as a substitute for ‘tax haven’.

Since their inception, tax havens have been a bane of the Majority World. Alongside the petrodollars flowing from the Middle East, and North and West Africa, large outflows of drug money related to Latin American drug cartels started to head northwards to Europe and the US in the 1970s. Then, in the 1980s, flight capital began to surge out of heavily indebted developing countries like Argentina, Brazil, Mexico, Nigeria and the Philippines. Following the 1973 OPEC-induced fourfold oil-price spike, Western private banks recycled huge volumes of oil dollars into loans to governments in the Majority World, but when the debt bubble burst in the 1980s much of that loan capital was found to have been shifted offshore by kleptocratic leaders, leaving the impoverished population to foot the bill.

Steadily, stealthily, the global economic order has been reconfigured since the 1950s to serve the interests of a class of untouchable and unaccountable offshore-based billionaires

It was in the 1980s that the global tax-haven industry truly took off. In the 1960s there were no more than a dozen offshore financial centres that could be categorized as tax havens, mainly located in Europe and its related territories. In 2020, there are over 100 tax havens located across virtually all time zones. Between them, they host a vast pinstripe infrastructure of financial and legal professionals who enable illicit financial flows; concoct and administer sophisticated tax avoidance schemes; and manage the wealth of billionaire clients. The best estimate I have seen suggests that up to $36 trillion of privately owned financial assets are managed from tax havens.

Matters are made worse by the fact that Switzerland, the UK and the US, and their fellow members of the Organisation for Economic Co-operation and Development, are responsible for shaping the global rules for taxing transnational companies. In practice these rules enable corporate tax avoidance via tax havens on a gigantic scale. Whether legal or not, tax avoidance has deprived governments of huge amounts of tax revenue, while also distorting markets and undermining people’s confidence in democracy. To give a sense of the scale of tax avoidance by transnational companies, the International Monetary Fund estimates the annual tax losses at $600 billion, around one third of which arises in Majority World countries.

What kind of world do tax havens create? An unequal world that enables rich elites to maintain and concentrate their power. They provide the means for powerful transnational companies to secure market dominance through covert tax avoidance strategies and non-disclosure of monopolist market positions. Tax havens are integral to the neoliberal system that guarantees rising levels of inequality. And when it comes to turning the global economy criminogenic, tax havens like Switzerland, the UK and the US have been key players in normalizing ways of doing business and politics which victimize vulnerable people throughout the Majority World.

Steadily, stealthily, the global economic order has been reconfigured since the 1950s to serve the interests of a class of untouchable and unaccountable offshore-based billionaires. Hiding behind shell companies and captive thinktanks, billionaires deploy huge efforts into lobbying politicians to secure special tax treatments, to lower labour market protections and degrade environmental protections, and to reduce social protections. The weak regulation and abusive tax practices that tax havens enable – and the anti-state, anti-democracy ideology that underpins them – inevitably stimulate race-to-the-bottom responses from politicians elsewhere, who pitifully engage in a faux ‘competition’ to attract foreign direct investment, much of which is used to acquire real estate or already existing and profitable businesses.

This new global economic order fails to meet the welfare and security needs of the vast majority of people. The wholescale tax cheating and the looting of resources to fund secret offshore bank accounts has increased unemployment – because so little of that wealth is invested in new productive activity – while also nurturing public resentment. Tax havens have undermined public services and created a general lack of economic and social opportunity. For those who want to understand why poverty persists in the 21st century, taking a critical look at the role of tax havens is a good place to start.

John Christensen trained as an economist and forensic investigator. He chairs the board of the Tax Justice Network. He co-produced the documentary ‘The Spider’s Web: Britain’s Second Empire’ which is available to view on YouTube: nin.tl/SpiderWeb

A brief history of impoverishment
Can cash hand-outs cure poverty?