Despite the challenges of ensuring equal access, health expert Christopher Morgan is hopeful that the Covid-19 vaccine push is helping to shape a better future for global immunology. He speaks to Amy Hall. 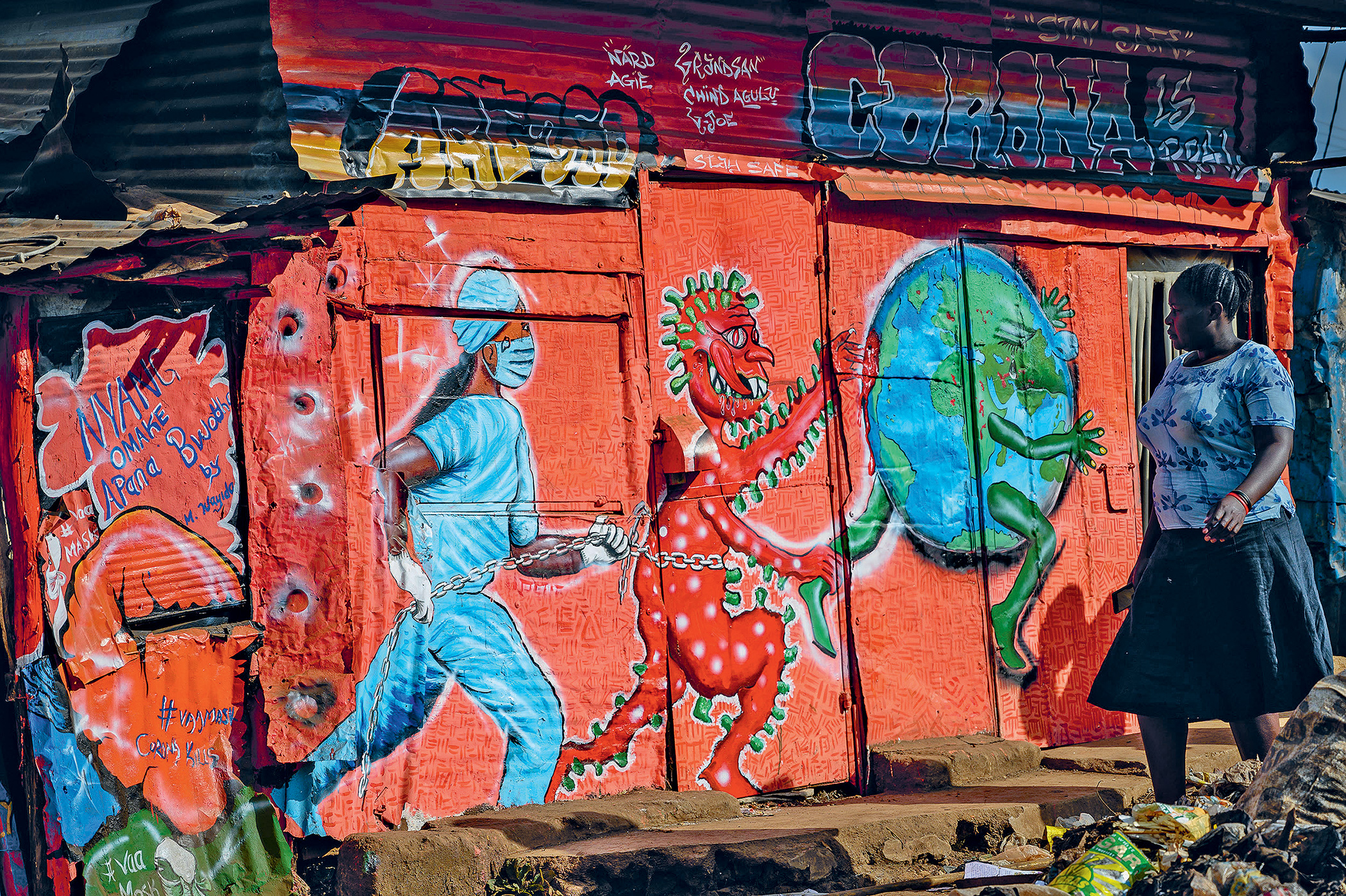 A local art group, art360, painted this mural dedicated to the fight against the virus in the settlement of Kibera, Nairobi, Kenya.
Photo: Gordwin Odhiambo/AFP/Getty

Christopher Morgan has three web browser windows open and is constantly clicking the refresh button, trying to get a Covid-19 vaccine appointment for himself in Washington DC. The day before we spoke, at the end of February, the immunization expert had been helping to design a vaccination plan for Lesotho. 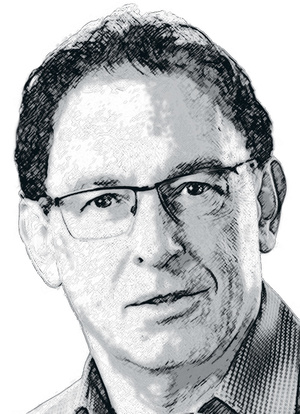 Morgan – a paediatrician and public-health physician – is 27 years into a globe-spanning career working in health development, with a focus on immunization, as well as maternal, child and adolescent health. He advises various World Health Organization groups on immunization and has recently worked for the Johns Hopkins University affiliate Jhpiego as a senior technical adviser. Originally from Sydney, Australia, Morgan has been a subscriber to New Internationalist since he was a student in the late 1970s, when he says he ‘woke up’ to development issues. This helped propel him (with his family) to work in Nepal and then Tibet in the 1990s, before joining the global health team at Burnet Institute in Melbourne where he worked between 2001 and 2020.

What do you see as the biggest barrier to ensuring more equitable access to vaccines globally?

It’s mostly political will. There’s some very nice economic analysis on the return on investment for vaccines. You generally get between $5 and $50 back for every dollar that it costs to buy, deliver and monitor a vaccine immunization programme, so it is by far the most cost effective – if you think in those terms – of all public-health initiatives. Vaccines themselves, even the most expensive, are actually quite cheap pharmaceutical products because many of them you just give once, twice or three times in a life-time. So, it’s not the cost, and I think this past year has shown that it’s not limits of science either. It’s really just the political will and commitment on the part of governments to actually put in the resources.

Vaccines themselves, even the most expensive, are actually quite cheap pharmaceutical products because many of them you just give once, twice or three times or so in a lifetime

I think the inequity in the responses to Covid-19 and the access to vaccines is pretty stark, but there is also cause for hope: there were just 77 days between a rich country getting the vaccine and a poor country getting it. That’s the shortest we’ve ever seen.

In terms of getting vaccines to people, to what extent is misinformation and lack of trust a barrier?

I think it’s a huge issue. There were already anti-vaccination lobbies emerging in civil society before the turn of the 1800s; it seems that pushback against the process of vaccination has been there from the beginning. The concept of ‘hesitancy’ originated with a desire for some nuance in the anti-vaccination community, to say: ‘Okay, there are some people who are out-and-out distrustful of all vaccines and others who are just a bit hesitant and want to know more before they accept it.’

I expect hesitancy is always going to be there because the process of vaccination involves putting a biologically active product that is artificial into a healthy person in the hope of stopping them getting sick. Legitimate concerns around protecting people who are currently healthy have pushed vaccines, at a global level, to develop the strongest safety architecture of any pharmaceutical product. The whole process – reporting adverse events from immunization, checking to see whether they are caused by the vaccine or something else, and then having the databases to log and track all that – is now highly developed.

The first role in rebuilding public trust has to be to show that countries are doing the best they can to monitor for adverse events and check out each event when it occurs.

The other communication challenge is around the sense of rush that has underpinned the development of the Covid-19 vaccines – and there I think we haven’t done a good enough job of explaining the vaccine trial process. Despite the fact that they’ve happened four to five times as fast as normal, all of the Covid-19 trials have actually tested enough people so that the 1-in-10,000-person adverse event can be excluded. But we haven’t communicated that well enough and some people just see the short time and think, ‘Maybe it’s been rushed so maybe I’ll hesitate’. Particularly in the countries in Africa where I’ve been working, we have not found a way to communicate the message that although the trials were quick, they actually enrolled, in just six months, the same number of people as they would have in trial over two to three years, in another setting. This means that we can guarantee that level of safety.

Then the third communication challenge is the politicization, particularly in places like the US, Brazil and, to a degree, the UK. This politicization of the response to Covid-19 has spilled over into things like mask-wearing, vaccination and other preventive behaviour. Somehow, we got into this weird situation in the world today, where deciding whether something is true or not is done on the basis of ideology or faith rather than science, reason or fact. And that’s expressed in the politics that says: ‘Well, if you wear a mask or do social distancing, then you’re a bit soft, leftwing.’ Unmasculine, even, in some settings.

How much impact do you think governments can have on this? I’m thinking of comments made by leaders like Trump and Bolsonaro.

It’s interesting, isn’t it? I think it’s probably the dominant factor in the spread of Covid-19. If you contrast Australia with the US, Australia has had a health protection committee that advised a moderately rightwing prime minister, balanced by state leaders with a mixture of political leanings. But all of them have, right from the beginning, said: ‘Okay, well we will accept the science and do what the science dictates, even if it’s politically unpopular.’ Same in New Zealand [Aotearoa] and other jurisdictions where Covid-19 has been brought under control. You see the reverse in the UK and the US, where prominent leadership – not just politicians, but also other influencers – has eroded public trust in science. And it’s very easy to – unfairly – erode trust in science, because science always has bounds of uncertainty. If you’re doing science properly you always end up saying: ‘We know this but we’re uncertain to this degree’. And that applies to vaccine science as much as anything.

We need to find better ways to communicate nuanced messages that respect people’s autonomy, agency and intelligence, so they can understand why vaccination makes sense.

There’s also the challenge that these are mostly preventive measures. When they work well there’s no news. It’s very hard to prove something that could have gone wrong but didn’t. The other challenge that makes public health a hard sell is that for it to work properly for something like Covid-19 you need collective action that is stringent enough; that is: a big enough proportion of people accepting vaccines or wearing masks so that the infection no longer spreads. That always infringes on the actions of an individual to some degree, so there is this inherent trade-off between individual freedom and the collective good. Mask-wearing 10 per cent protects you – 90 per cent protects other people; you’re having to do something for the collective good that is inconvenient to you. Without political leadership you can’t overcome those key challenges of: ‘Yes, I believe the science and even though I can’t see it, we’ve prevented something’; and ‘Everybody has to do this otherwise it doesn’t work for anybody’.

Is there anything you’re particularly excited about in the world of immunization today?

What’s exciting for me is that the latest global vaccine strategy – the Immunization Agenda 2030, which I and others contributed to – includes the need to emphasize life-course vaccination and the integration of immunization along with other health initiatives.

This means whenever you see somebody in any health setting, you should be also thinking about whether their vaccinations are up to date. When you’re checking on the growth of a child, you’re also thinking about vaccination. The other aspect is seeing the immunization platform – which is the strongest public-health platform in the world – as a vehicle to get other lifesaving healthcare to children and adolescents. Even if you think just in terms of infancy, with global immunization strongest in that first year of life, every year more than 100 million families are reached. If you can bring in something else like Vitamin A, or maybe education around family planning, that is exciting.

The fact that we now have a vaccine that has to be given to healthy young adults if they are frontline workers and has to be given to elderly adults in every country is really giving a major boost to the concept that vaccination occurs right though people’s lives. When I can get back to the other parts of my vaccine work, which focuses on adolescent girls and getting the HPV vaccine that prevents cervical cancer to them, that is also a way to get lifesaving sexual and reproductive health education to that age group. So, that is another silver lining, I guess, that the Covid-19 vaccine push has forced us to think about life-course vaccination in low-income countries much more quickly than we would have otherwise.