Folk music royalty Peggy Seeger speaks to Louise Gray about her life, her music, and her political activism. 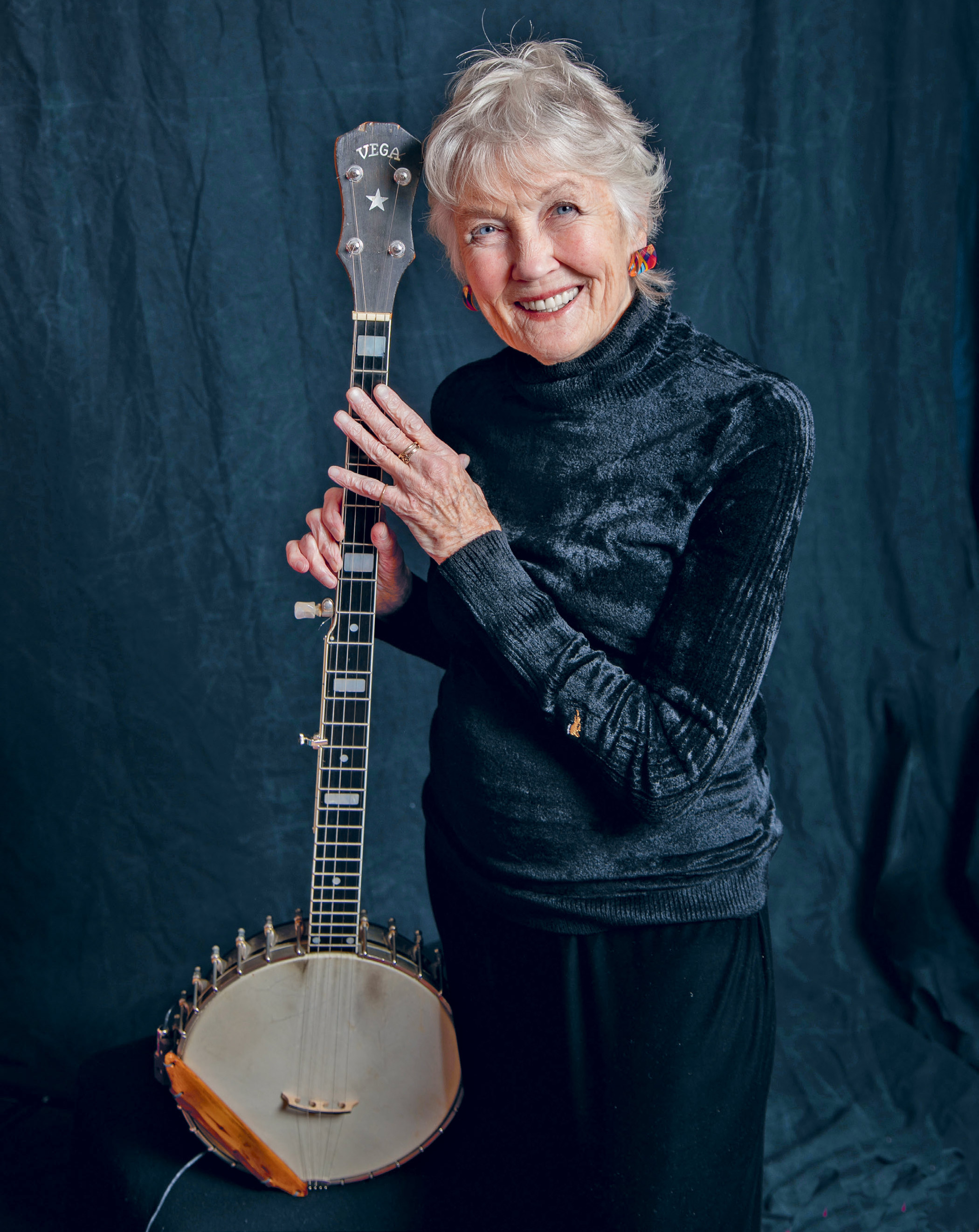 Peggy Seeger, folk royalty and a legend among musical legends, is sitting in her Oxfordshire home beaming at her computer’s camera for this Zoom session. We’ve been speaking for nearly an hour about her life, her music and, closely aligned, its political activism; and how, at 85, the body doesn’t make it so easy to get out on demonstrations and picket lines, though her spirit is still very much willing. Seeger’s blue eyes sparkle throughout and then, suddenly, she throws a question: ‘So, why have you come after me?’

The immediate answer might be the most obvious one. Seeger has recently released a new recording, First Farewell – her 24th solo album – which, like so much of her music, doesn’t shy away from difficult issues. This time: modern slavery, loneliness in the age of a hyper-linked world, male suicide. One searing song, ‘Lullabies for Strangers’, addresses the au pairs, nannies, child-minders, who must leave their own children to look after other people’s. ‘Lullabies for a stranger’s children, who sings for my own little girls?’ ask the discomforting lyrics. This is what Seeger does so well: she observes the humanity in the subject she writes about and does it with tenderness.

But this isn’t the most interesting answer. Instead, I tell her about my experience of watching Norma Waterson, another great folk matriarch, sing, and how in the delivery of her song she hands it over – her hands gesturing, repeatedly, in an act of giving – to her listeners. Seeger’s eyes sparkle some more. ‘The song is a gift to take away,’ she says. ‘Yes.’

‘You can’t make up a folk song, a folk song becomes,’ she explains, as a way of indicating that a historical weight is one of the ways that a song gains resonance

Seeger is one of those rare musicians who understands, intimately, about how music, and especially song, is a living thing that has social force. Songs link communities; they express joy, anguish, conflict. At one point, I mention the oral historian Alessandro Portelli’s classic account of life among the Appalachian mining communities, They Say in Harland County. Without missing a beat, Seeger starts singing ‘Which Side Are You On?’, the Florence Reece song from which Portelli took his title. (To be fair, her half-bother, Pete Seeger, included it in his repertoire.) But it’s a neat illustration of a living tradition of folk music. Seeger understands its legacies and its possible futures.

Music has always been a family affair for Seeger. First Farewell – mostly completed before the first lockdown hit the UK in March 2020 – is no different. The album features her vocals (mellifluous, sometimes mischievous, always on point) and piano, while her sons, Calum and Neill MacColl (their father was that great political folkie, Ewan MacColl), join on guitars. Daughter-in-law Kate St John, late of the Dream Academy, is present on a multitude of other instruments. The result is a tightknit collection of songs that punch hard when they need to.

Being in a crucible of music has been Seeger’s life. Her father, Charles Seeger, was a musicologist who often worked with Alan Lomax in preserving the folk songs of the US, where Seeger was born and raised. Her mother, Ruth Crawford Seeger, was a pioneering modernist composer, albeit one who had to put that side of her life aside once she married. (Seeger didn’t find out how important a figure her mother was – the first woman to win a Guggenheim award – until she was much older, something she regrets.) In First Time Ever, her autobiography published to great acclaim in 2017, Seeger recounts some of the people who would pass through the family home: Woody Guthrie, blues musicians Elizabeth Cotton and Leadbelly, Lomax, of course, and many others. Crawford Seeger never saw folk songs as simple and neither does her daughter.

Don’t ask her to define folk music. ‘I don’t go there any more!’ she says. ‘I’ll tell you why. It’s because I sing almost all North American, Eastern white Anglo-Saxon folk songs. I don’t sing songs from the Black community because I don’t feel entitled to do so… I don’t sing Woody Guthrie songs, I don’t sing Leadbelly songs, because these are not what I feel I can identify with.’ First Farewell, Seeger says, is not a folk album. ‘You can’t make up a folk song, a folk song becomes,’ she explains, as a way of indicating that a historical weight is one of the ways that a song gains resonance. But it is full of songs that look at power, something that fits her self-description as a ‘feminist songwriter’.

‘What does that mean?’ she asks rhetorically. ‘I suppose a bringing forth to us women what we deserve. Women are 52 per cent of the population and deserve to be treated equally [to men], to be given the same rights, the same privileges, the same wages, the same lack of personal violence. I don’t know that it’s possible in a patriarchy ever to have that.’

But you know she’s going to try.