We took money out of politics? Frank Fornby shares his vision for better representation. 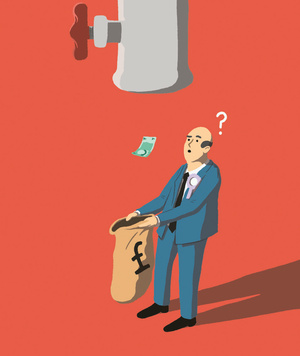 Imagine you had a co-worker who spent 99 per cent of their time at work telling everyone else how great they were. In the other 1 per cent of the time their work was, at best, mediocre. When they messed up, they claimed that it wasn’t their fault. They abused the company credit card to fund an extravagant lifestyle and channelled company contracts to their friends and supporters. Such a colleague wouldn’t last long. Yet we keep electing politicians who match this profile.

Why? It’s partly down to the branding of political parties. In Australia, for example, while some voters may be led by self-interest, many are looking for stability and reliable leadership, which they associate with established parties. However, it’s obvious that these qualities – even in multiparty, relatively mature democracies – are in decline.

One way to fix our politics would be by defunding our political systems. The first step? To reduce the salary of parliamentarians to the national median. This would reconfigure the role of representative as a service to one’s fellow citizens and rule out politics as a lucrative career path. This measure would need to come with strict rules to ensure politicians couldn’t profit in other ways from their influence.

Critics will trot out the old line: ‘If you pay peanuts, you will get monkeys.’ However, the policy might encourage younger candidates, for whom the salary would be attractive, and bring enthusiasm and a forward-looking perspective.

Another group that might choose to stand are those who are financially secure after being successful in other fields, who would bring life-experience and wisdom. People still building their careers could stand if their jobs were kept open, in recognition for their public service.

The next step would be to take money away from political parties, which would become entirely volunteer-run organizations with no paid staff. Corporate influence would be reduced as political donations were phased out (though party members could still contribute small amounts for running expenses).

Political advertising would be banned or else scaled-back and highly standardized. All policies of candidates or parties would be hosted for free on a central website, together with all the candidates’ voting records. New measures would be needed to reduce the ability of wealthy individuals, corporations and media organizations to broadcast political propaganda.

None of these measures would stop political parties from being forums for debate outside of parliament. Parties may however become redundant and disappear altogether, as they have in Guernsey, in the Channel Islands, where all representatives run as independents. The experience of Chile, where a host of talented and responsible independents were recently elected, and Australia’s newly minted Local Party also offer models to follow.

To deepen reform, strict term-limits would also need to be put in place for politicians, constraining the number of times they could both stand for election and be elected. This would give them less cause to gag, politicize and bully the civil service. It would also hollow out corporate lobbying, with the changing cast of representatives putting the stoppers on cosy long-term alliances and revolving doors.

Meanwhile, privileged access to parliamentarians, particularly by large corporations or the wealthy, would also be banned, with all communications directed to the entire parliament.

Freed from corporate influence, we could expect the focus of legislation to turn to good governance. Policymaking could be informed by a systematic search for global best practice, an explicit statement of who benefits and who is potentially harmed, and a plan to minimize or compensate negative impacts.

If it was performing well, the executive, along with the civil service, would provide the stability and leadership that the electorate craves. Parliamentarians would function more like a permanent citizens’ assembly, cease endless politicking and be able to concentrate on supervising the apparatus of state and making wise decisions on behalf of the entire people. For example, in Australia, politicians might even find they were able to legislate on behalf of the majority of the voting population who favour immediate action against climate change.1 It is the least that citizens deserve.

Frank Formby is a long-time reader and co-owner of New Internationalist.