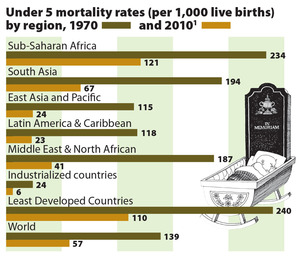 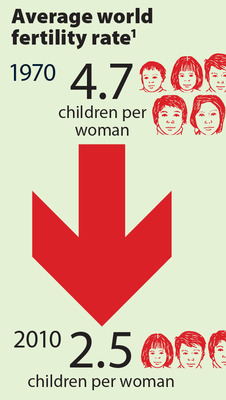 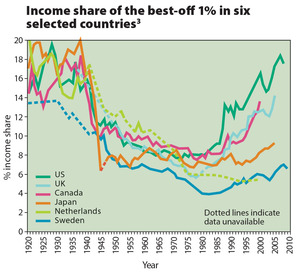 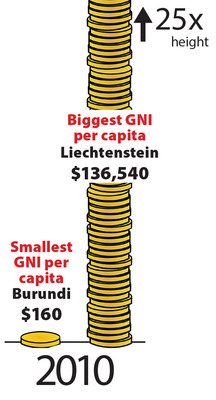 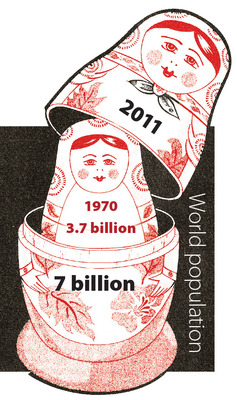 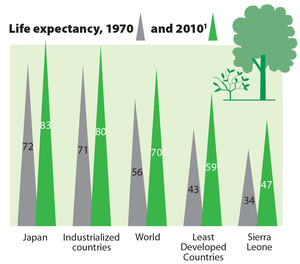 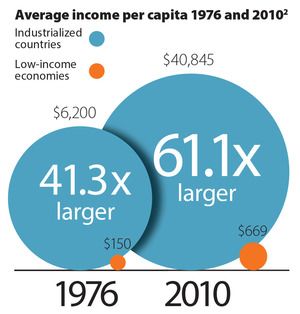 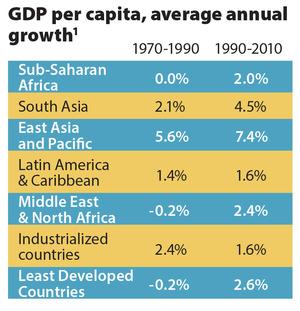 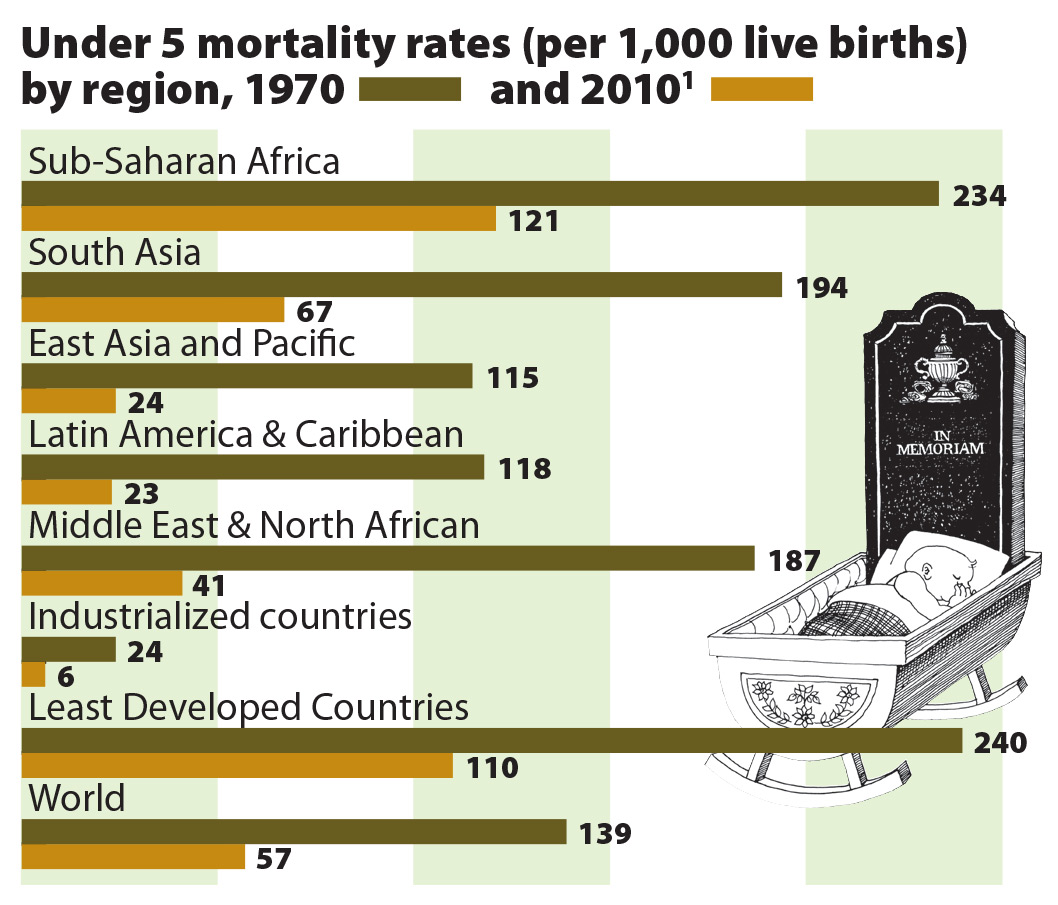 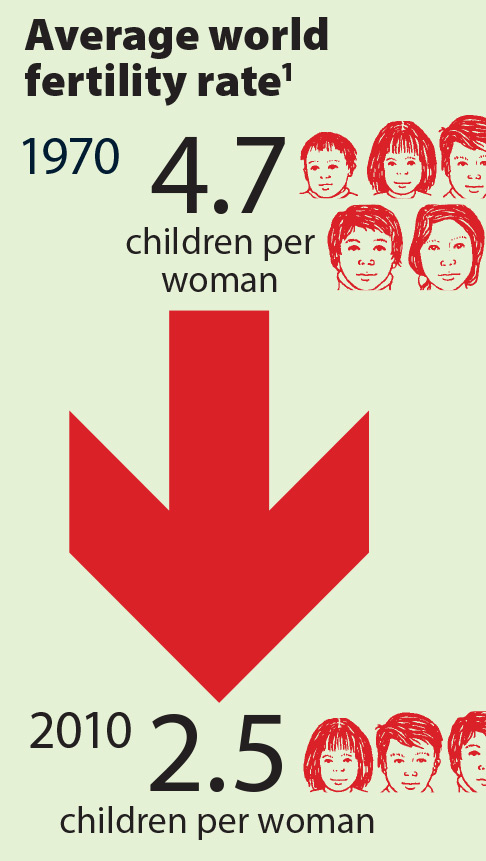 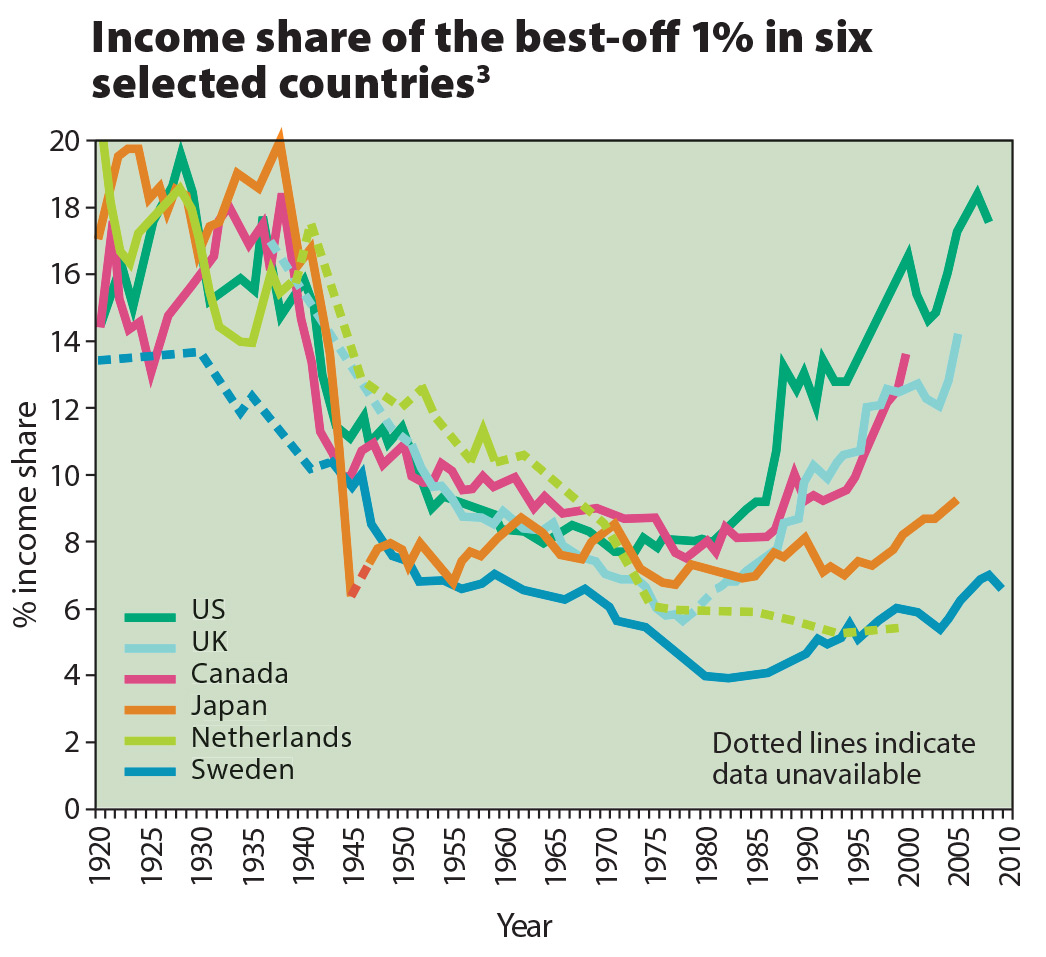 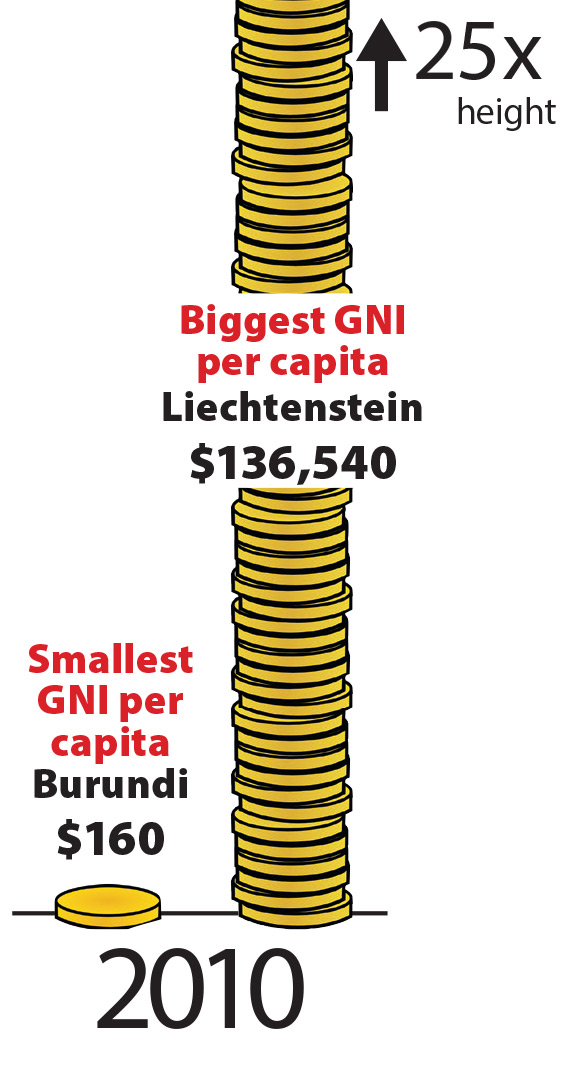 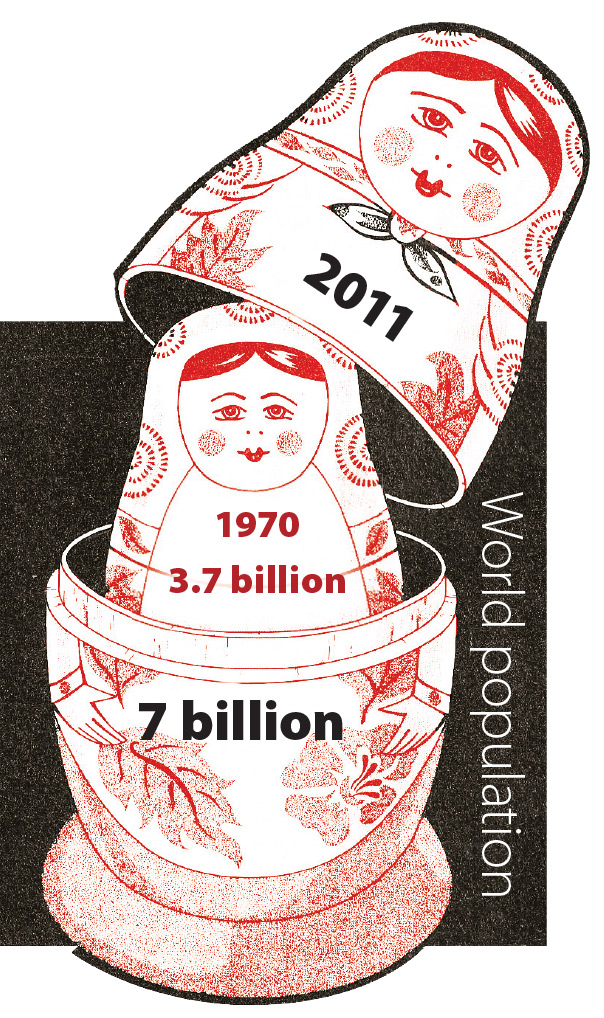 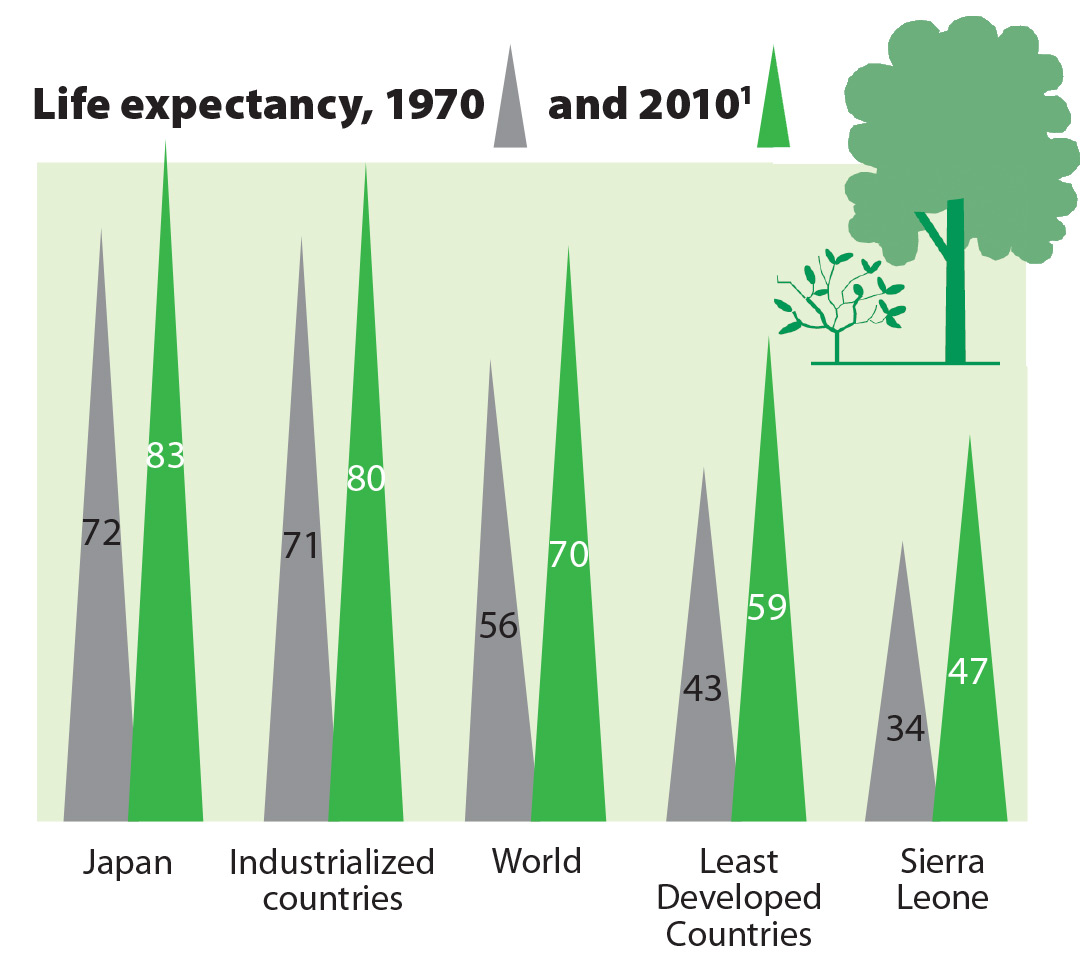 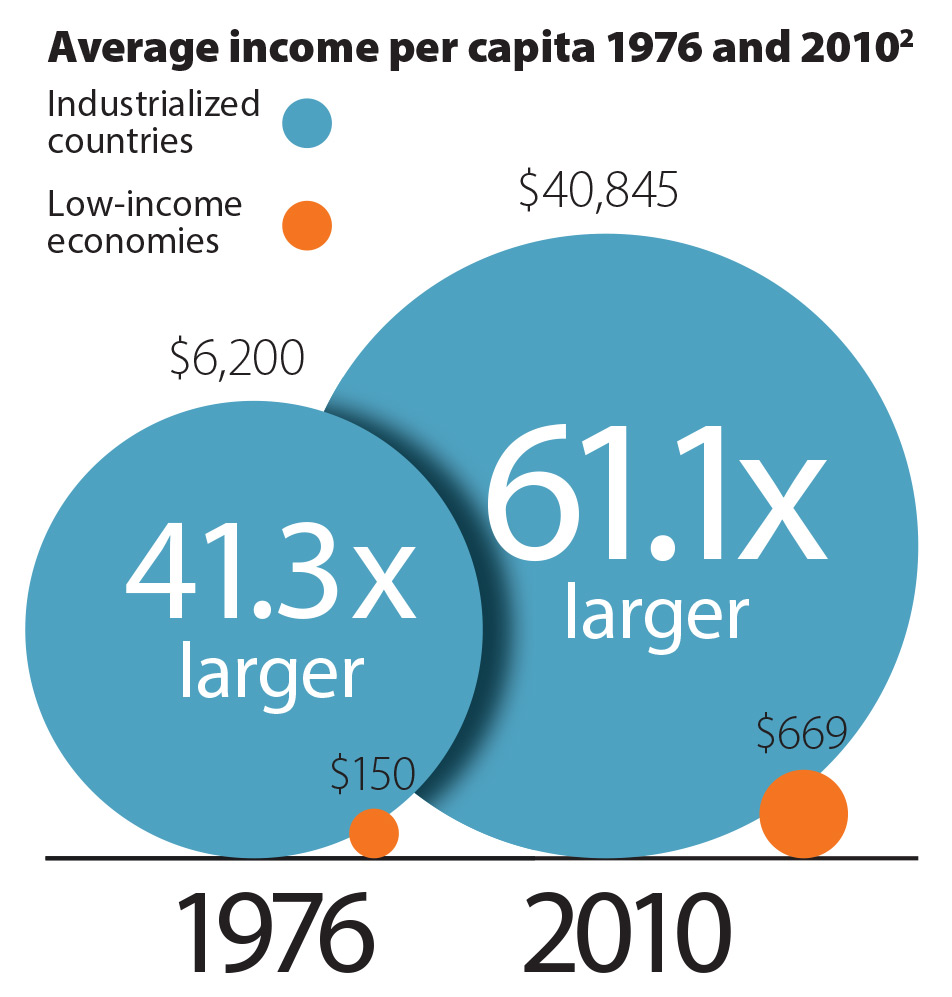 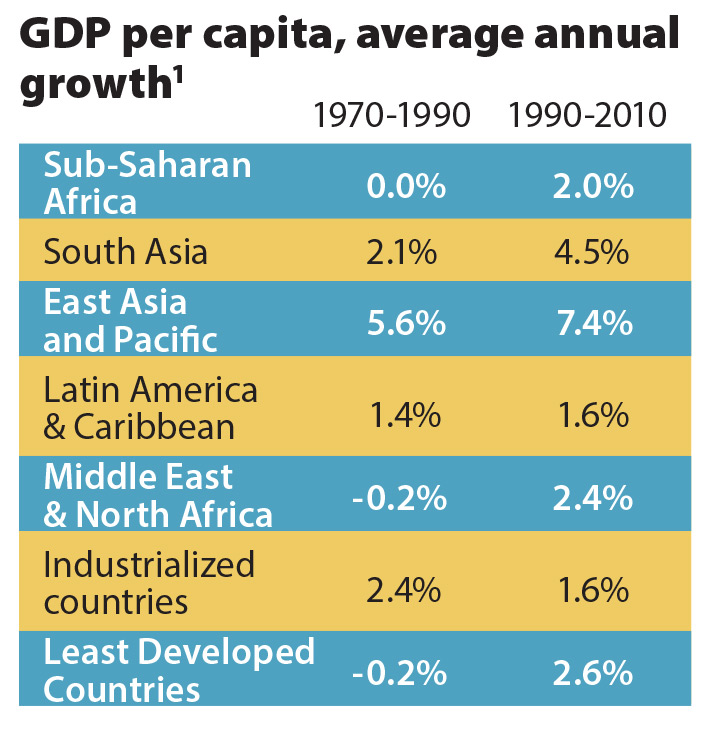 The world that the New Internationalist describes has changed radically over the 40 years the magazine has been in existence – and not always in the ways it would have wished. Here we use some of the magazine’s time-honoured ways of presenting statistics to chart some of the changes.

There are almost twice the number of people on the planet today that there were in 1970. And yet world population growth has slowed much faster than was envisaged in 1970. Fertility rates have fallen steeply over the period.

The highest fertility rates are in the poorest countries – the Least Developed Countries, most of which are in Sub-Saharan Africa. Reduce these faster through improving women’s rights and the living standards of the poor, and world population will stabilize earlier than the current projected peak of
9 billion around 2050.

The acid test of human development is whether people are living longer – and the improvement in life expectancy worldwide since 1970 is remarkable. World average life expectancy has increased by 25% since 1970 and is now approaching the level enjoyed in rich countries four decades ago. The gulf between the countries with the highest and lowest life expectancy (Japan and Sierra Leone) remains, however, vast and unacceptable.

Huge progress has been made in saving the lives of children under five. Globally the child mortality rate has been cut by almost 60 per cent – though in the poorest countries 1 in 9 still die, and in Sub-Saharan Africa the rate is closer to 1 in 8.

Measures and classifications change over time and cannot easily be compared with each other – gross national product (GNP) has been replaced by gross national income (GNI), and those countries considered ‘low income’ or ‘least developed’ in 1976 are not the same as those in 2010. But the broad-brush message is clear – far from having been reduced by four decades of development efforts and latterly by globalization, the gap between the richest countries and the poorest has actually become wider.

Within these extremes, some developing countries have, of course, made major strides over the four decades, especially in Asia – both China and India were counted as ‘low-income economies’ by the World Bank in 1976 . This table gives a sense of how different regions have fared in economic terms over two periods: 1970-1990 and 1990-2010.

In the UK, US and Canada, the 1970s – the decade of New Internationalist’s launch – was the high-water mark of social equality. From the 1980s onwards the neoliberal economic policies pushed by Ronald Reagan and Margaret Thatcher – and exported to much of the world – have taken levels of inequality back to the levels experienced in the 1920s and 1930s. But these are political choices made, not economic inevitabilities, even under globalization. Some other rich countries have remained much more equal and socially cohesive – as in the Netherlands, Japan and Sweden.

Where are they now? Rigoberta Menchú
Highly charged election