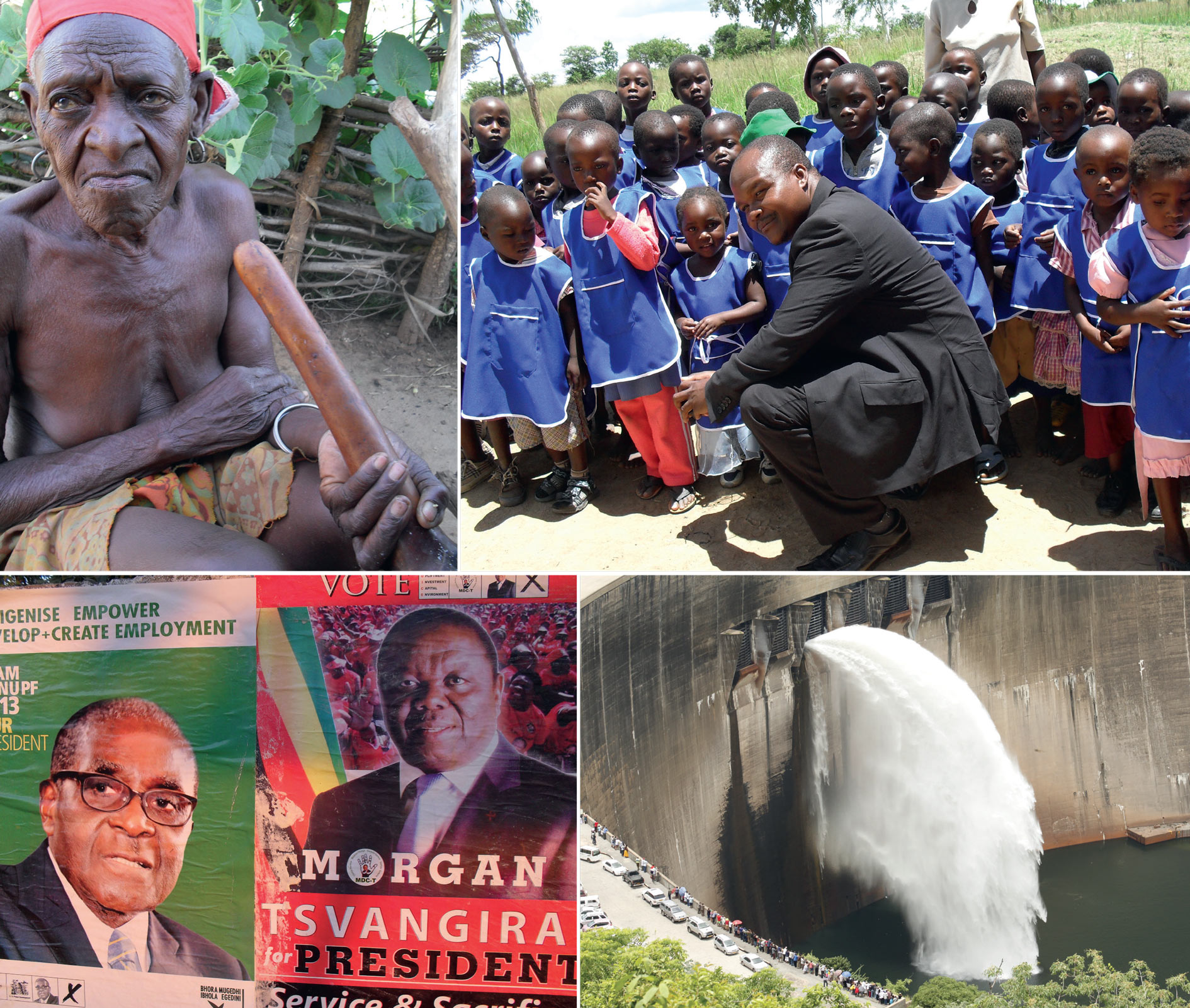 Clockwise from top left: 78-year-old Esnaath Chilabala, from Binga in the province of Matabeleland North; ZANU PF MP Godfrey Gandawa with primary schoolchildren in Katenhe; the Kariba dam for hydroelectric power, which is shared by Zimbabwe and Zambia; rival election posters for Mugabe and Tsvangirai.
Photos: Nhau Mangirazi.

The internationally renowned dub poet Albert Nyathi’s song ‘Welcome to Zimbabwe (Land of contradiction)’ aptly explains why the Southern African nation is misunderstood even by its own citizens. It says: ‘Once colonized in 1890, uncolonized in 1980... This is the contradiction, my friends... Where you will meet doubting eagles in the sky and the hissing snakes in the grass… It is a boiling pot of countless cultures, a hotchpotch, a wishwash...’ The song speaks to the country’s natural beauty and to its violent and deceptive political landscape, where things are not as they seem.

The presidential election of 31 July saw 89-year-old Robert Mugabe returned to power in a landslide victory, with 61 per cent of the vote compared with the 34 per cent won by outgoing prime minister Morgan Tsvangirai. Tsvangirai and his Movement for Democratic Change (MDC), along with the Zimbabwe Election Support Network, claimed that the election result was fraudulent. Among the concerns were the low percentage of voters registered in urban areas (68 per cent) compared with the 99 per cent in the ruling ZANU-PF party’s rural heartland; the number of duplicate voter names on the electoral roll; and voters being turned away from polling stations. The MDC dropped its legal challenge to the result, however, claiming that the legal system was stacked with Mugabe supporters.

The African Union, which monitored the election closely, gave it a clean bill of health, saying that, despite some concerns, the margin of Mugabe’s victory (almost a million votes) left no room for doubt. The Southern African Development Community (SADC), currently headed by President Joyce Banda of Malawi, called for sanctions now to be lifted on Zimbabwe. The US State Department, which instituted sanctions on the Mugabe regime in 2003, refused to lift them. 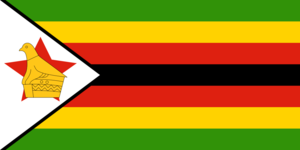 After the last election, in 2008, which was marred by appalling violence, power had seemed to be slipping from the hands of Mugabe, who has ruled Zimbabwe ever since the country gained its independence from Britain in 1980. The economy was in a calamitous downward spiral, with inflation utterly out of control, reaching its world-record peak in November 2008 of an astonishing 6,500,000,000,000,000,000,000,000 per cent.

The MDC was at that point brought into a government of national unity and Tsvangirai was given the role of prime minister. The Zimbabwean dollar was abandoned – the US dollar and the South African rand are in practice the basis for most transactions now – and inflation was brought under control. The economic improvement over the last five years has been reasonably steady – in fact the country was recently included among the top 10 economic performers on the continent by the UN Economic Commission for Africa. Nevertheless, the majority of the population continues to survive on less than one US dollar a day.

Emboldened by his victory, Mugabe is promising to press on with his vision of ‘local economic empowerment’ – his earlier policy of taking over white-owned farms and putting them in the hands of black supporters was widely blamed for the catastrophic collapse in food production in the mid-2000s, partly because so much of the land ended up in the hands of party cronies rather than small farmers. As part of the latest phase of the policy, mining companies have already been forced to concede 51-per-cent local ownership and the government now has its eye on other companies, including banking firms Standard Chartered and Barclays.

Foreign investors will inevitably be wary of the renewed Mugabe regime but so too will many ordinary Zimbabweans concerned that the hard-won stability of the last few years might now be endangered. 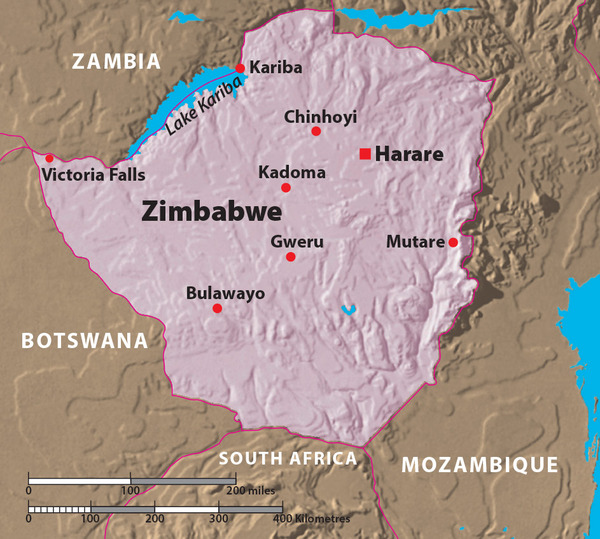 Income Distribution
The economic élite includes political leaders and military officers; corruption is a big problem. The poor continue to struggle in both urban and rural areas.
2001
Life Expectancy
51 years (South Africa 53, UK 80). Still appallingly low due to AIDS deaths, but up from 43 years since last profiled.
2001
Position Of Women
Few women hold positions of power. The group Women of Zimbabwe Arise faced a severe clampdown in the election run-up.
2001
Freedom
Demonstrations are technically legal but the police must give clearance for political gatherings and the Public Order and Security Act is selectively enforced. Several independent newspapers operated during the unity government period but all journalists and NGOs faced pressure from both main parties in the election period.
2001
Literacy
91% – currently the highest literacy rate in Africa (South Africa 86%).
2001
Sexual Minorities
Male homosexuality is illegal and same-sex marriage was constitutionally outlawed in 2013. The Zanu-PF party has stigmatized gays and the country remains sexually conservative.
Politics
The unity government was credited with bringing a stable economy, some measure of press freedom and improved international relations. Mugabe has, however, emerged from the 2013 election in a strong position, with clear support from neighbouring countries, and he has been named as vice-chair of the SADC. The poor can only hope that the talk of harnessing Zimbabwe’s economic resources for their benefit has some meaning beyond enriching ZANU-PF cronies.

Leader
President Robert Mugabe (since 1980).
Economy
GNI per capita $640 (South Africa $6,960, UK $37,780).
Monetary
None – most trading is in US dollars and South African rand.
Main Exports
Platinum, cotton, tobacco, gold, ferroalloys, textiles/clothing. Economic growth peaked at 9% in 2010-11 but dropped to 5% in 2012 following a poor harvest.
People
12.9 million. Annual population growth rate 1990-2011 0.9%. People per square kilometre 33 (UK 253). Nearly 3 million Zimbabweans fled the country in 2007 due to the economic crisis, half of whom are still thought to be in South Africa.
Health
Infant mortality 43 per 1,000 live births (South Africa 35, UK 4). Lifetime risk of maternal death 1 in 52 (UK 1 in 4,600). HIV prevalence rate 14.9% – the world’s fifth highest (with all five in Southern Africa).
Environment
The current concerns are over deforestation, soil erosion, land degradation and water pollution. The country was once considered a sanctuary for the black rhino but poaching deaths are now a severe problem.
Religion
Over 60% of the population is Christian with the Catholic, Anglican, Methodist and Pentecostal churches all well represented.
Language
Zimbabwe has 16 official languages, including English as its international language. The main languages, however, are Shona, spoken by 70%, and Ndebele (a variant of Zulu) by 20%.
Hdi
0.397, 172nd of 186 countries (South Africa 0.629, UK 0.875).