Psychoanalyst David Morgan on what makes some people risk all to speak out. 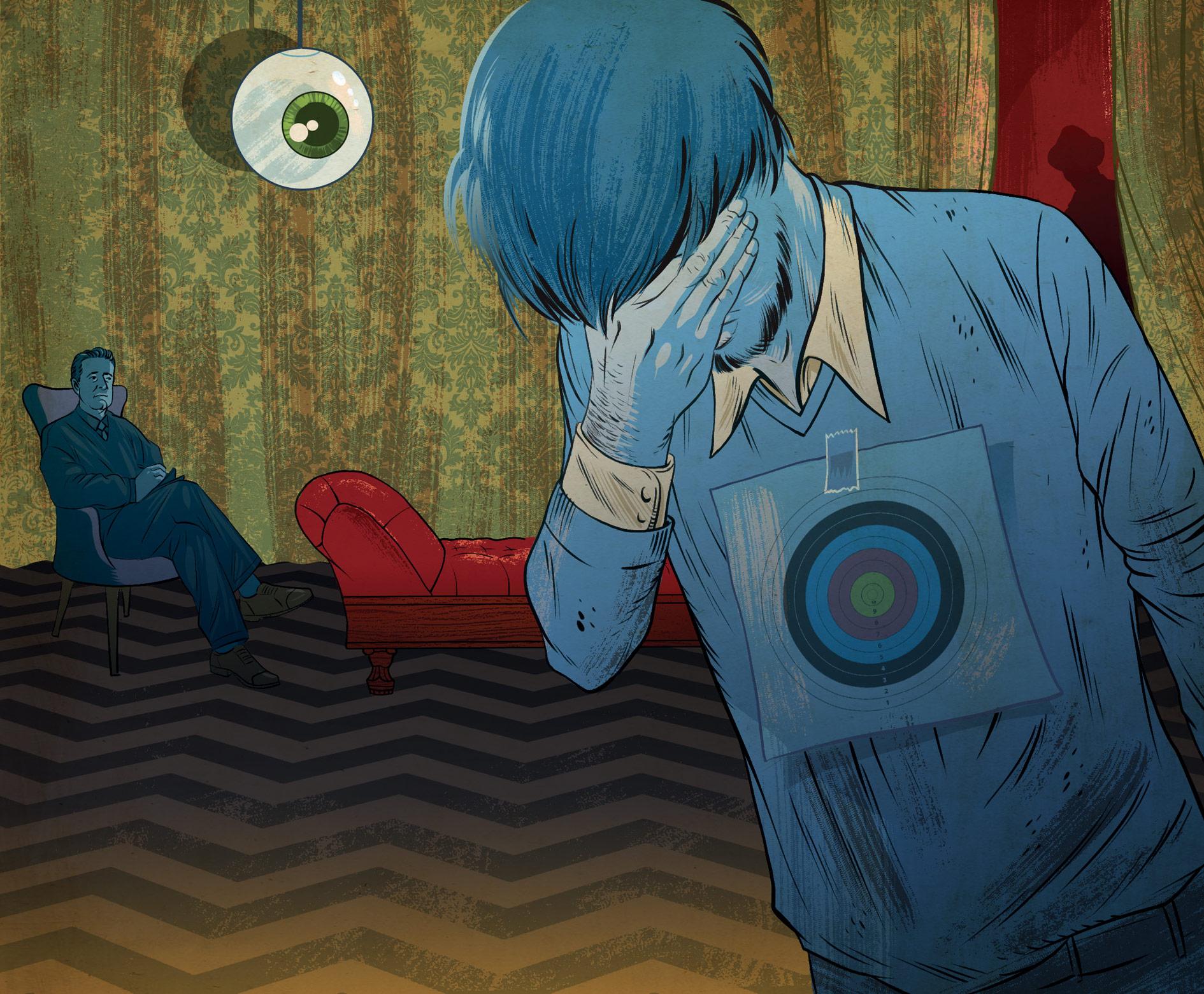 Illustration: Dominic Bugatto/Three in a Box

Think of films like All the President’s Men, Erin Brockovich and The Insider.

These all tell the stories of whistleblowers whose place in the hall of fame seems assured. Through their disclosures they, rather than governments and leaders, have become the important ones.

But for most of the people I have seen – since becoming a volunteer consultant for a whistleblower charity – it is a very different story.

Most experience loss, not gain, through their actions. They have had their lives turned upside down, their places in their communities dismantled. They have lost their peace of mind and quite often faith in their own value and motives, as well as those of others.

So what motivates a whistleblower? Why risk so much?

As a term, ‘whistleblower’ sounds vaguely pejorative – like a snitch. I prefer ‘social discloser’. In Germany there is no word for it; the expression used there translates as ‘traitor’.

In totalitarian states, like North Korea or Iran, hideous consequences for any perceived betrayals are to be expected. In the mature democracies of Europe, North America or Australasia, we expect a different set of mores.

But I am struck by the harshness of our societal attitudes towards those who break public laws or standards and undermine assumptions about the safety of our world.

Take the vehicle maker who discovers that his factory has been using seriously sub-standard materials. The economic impact of a scandal on his company, already on the brink of collapse, would be disastrous. He is in a position to make himself and all his colleagues unemployed. But he is also aware that the lives of vehicle users are at risk. He talks to, and is shunned by, his union and his bosses. But still he speaks out.

‘Is this place bugged?’ asked the first discloser I worked with

He receives death threats by mail and loses his job. His health begins to deteriorate. He is accused of having mental-health problems, which, of course, by now, he does. He goes to his member of parliament and is told that there is ‘no evidence’ to support his claims. The MP and local newspapers are funded by interested parties.

Think of the health workers who have spoken out about the effects of spending cuts and the culture of un-care that prevails in some British hospitals and nursing homes. People like Margy Haywood, a nurse who, for the BBC’s Panorama programme, covertly filmed the abuse and neglect of elderly patients in an NHS hospital. It was she who was punished, losing her nursing registration for ‘breaching confidentiality’ while the staff who were abusing the patients were allowed to carry on working.

The emotional fall-out from revealing truths that others prefer to keep hidden is frequently underestimated. There will be powerful forces ranged against the discloser in order to maintain the status quo. Disclosers threaten the defences and belief systems that institutions have developed to permit the behaviour that is being exposed. Revelations can be experienced by the institution and colleagues within it as humiliating and attacking. These colleagues may see themselves as justified in retaliating against a whistleblower and there may be a concerted effort to discredit or pathologize her or him.1

‘Is this place bugged?’ asked the first discloser I worked with, referring to my consulting room.

Normally I would see such a concern as a fantasy, a projected form of aggression, externalized on to the outside world, where it then persecutes the originator from outside, in the minds of others or through delusions and hallucinations. Through externalization, the internal aggressive impulses are thus reduced and ‘put out to tender’.

But when it comes to social disclosers the question ‘is my room bugged?’ does not seem so delusional.

Undoubtedly, some of the people I see do exist in paranoid states of mind and some will have had traces of this before they disclosed. After they have blown the whistle they feel watched, their level of trust is low and it is easy to write them off as vexatious litigants and troublemakers.

In Britain, 4 out of 5 people say they think whistleblowers should be supported.
Source: PCaW, The Whistleblowing Commission, November 2013

Of course, not all whistleblowing is benign or altruistically motivated. Disclosure can be used to inflict revenge and humiliation. Stalled careers, failed love affairs or lack of a pay rise can increase the willingness of some individuals to shame or punish their communities, employers or families. But these are a small minority, in my view.

What is more likely is that the organization called into question by the whistleblower becomes dedicated to destroying the moral individual – and often succeeds. Disclosers are broken, unable to reconcile their actions and beliefs with the responses they receive from others.1

In order to make sense of their stories, some whistleblowers must set aside the things they have always believed. For example: that truth is larger than the herd instinct; that someone in charge will do the right thing; that the family is a haven from a heartless world.

Any psychoanalyst will tell you that we project on to external authorities our internal versions of parental figures. When those parental figures are benign and fair-minded the failure of external authorities to live up to the projection can be devastating. Many whistleblowers recover from their experience but even then they live in a world very different from the one they knew before their confrontation with the organization.

Many people who disclose reasonably might expect some reward, praise, respect. They often face disappointment. Often, we just don’t want to know. Some receive support from their loved ones, others can feel persecuted by them, as they feel guilty or are made to feel that way for putting their families at risk.

It is useful for the whistleblower to have an understanding of group hostility to revelations that are threatening to cohesion. The discloser needs to find a way to maintain their self-belief during these times of personal stress and marginalization.

They will also need help to understand the unconscious reasons for putting themselves in this situation in the first place.

And that takes us to the heart of individual psychology, personal experience and unconscious motivation. Any previous emotional and psychological difficulties will be exacerbated or brought to the surface. Motives and personal integrity will be publicly questioned. Through reversal and projection the institution that is being called into question can evade any sense of responsibility for wrong-doing. The discloser is therefore made to feel that she or he is the wrongdoer, arousing serious self-doubt and depression.

In his book 1984 George Orwell used the term ‘double-think’. The psychological phenomenon behind this is called ‘doubling’. For example, you are a middle-level functionary in a bureaucracy or corporation and you possess some truth that you know does not conform to the agenda of your institution or boss.

Doubling – or ‘splitting’ as I would call it as a psychoanalyst – means you can hold true to your personal morality while maintaining a separate public or institutional morality. At home you may never behave this way but at work telling the truth may hurt not only your institution but your livelihood and the health and safety of your family. In such situations, it is helpful to be able to hold contradictory positions to separate out your different selves and different loyalty structures.

As US psychologist Fred Alford has noted, whistleblowers are often people who are unable to ‘split’ themselves. The inherent contradiction would be too great and too painful.

German philosopher Hannah Arendt wrote of heroic individuals, people who talk seriously with themselves about what they are doing, people who cannot double, or do double-speak. They feel a compulsion to do the ‘right thing’.

As one patient told me: ‘I had to do it, I couldn’t live with myself if I didn’t speak up.’

‘A market economy thrives on inequality so self-interest will always triumph over the moral good,’ observes philosopher, psychoanalyst and cultural critic Slavoj Zizek.2

The whistleblower has to be vilified lest she or he expose the rottenness that we accept to maintain lifestyles often based on the suffering of others. Their lone voice is fulfilling a role in society that we are afraid to take.

We are never going to be able fully to decipher the motives of those who disclose. I am not sure we need to. We can argue about the personal stories of famous examples like Edward Snowden and Julian Assange.

Perhaps the most important thing to keep in mind is that societies which cannot tolerate disclosure and transparency are on their way to being totalitarian states. Whistleblowers therefore act as the conscience for us all.

David Morgan is a London-based psychoanalyst, who volunteers with Whistleblowers UK.

Blasts from the past
Brave Father Musala