Richard Swift begins his journey through political alternatives to capitalism by looking at the nature of the beast they seek to oppose. 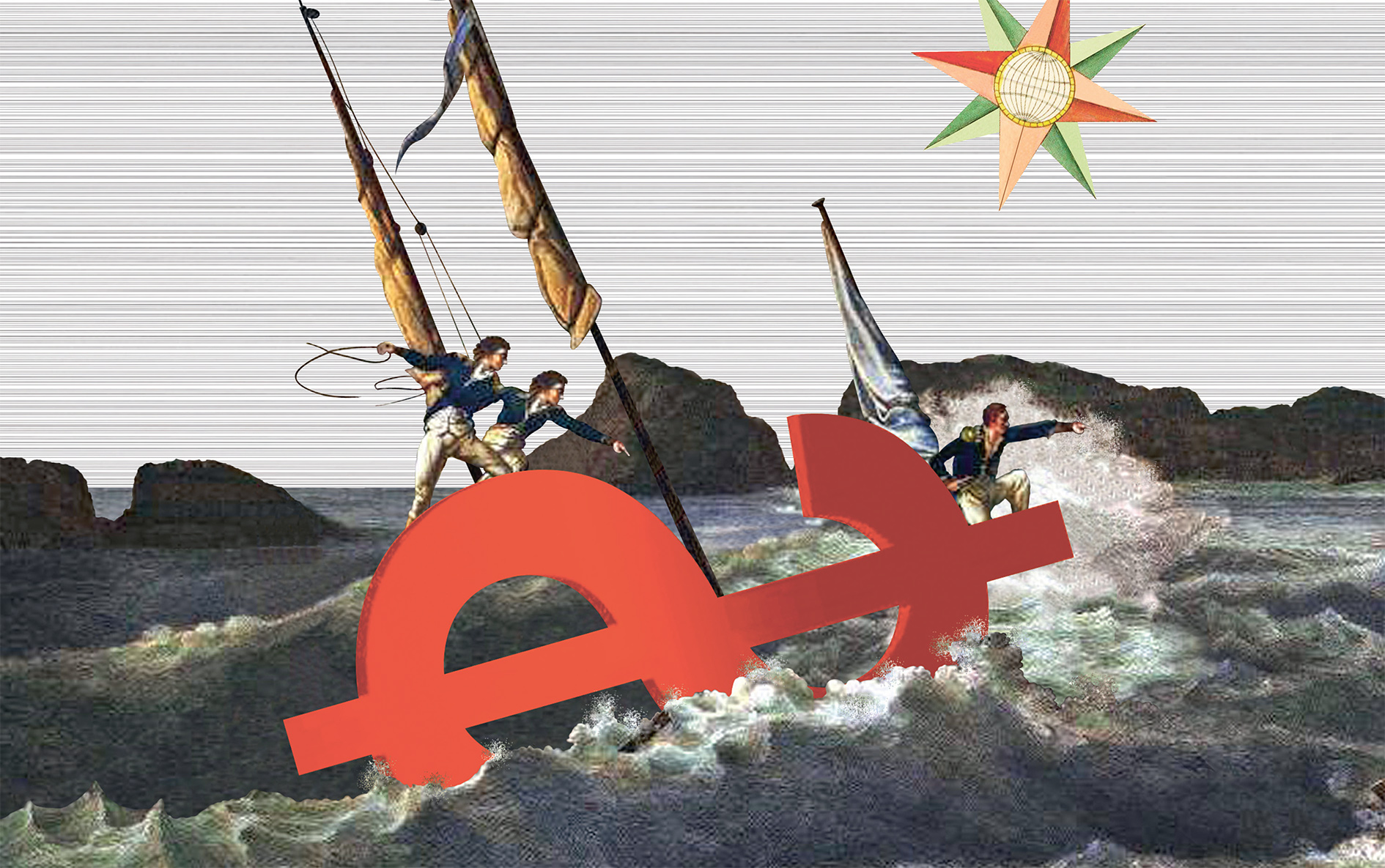 All illustrations for Alternatives to Capitalism by Volker Straeter unless otherwise marked.

Capitalism as a total world system is a relatively new part of human experience. It has its roots in the 16th and 17th centuries, which means that it has been around for four or five hundred years at most, while we humans (Homo Sapiens) have been around for 200,000 years, reaching anatomical maturity some 50,000 years ago. Our ancestors (the less predatory Homo Erectus) go back over a million years. By these measures capitalism is merely the blink of an eye.

Yet for most people living today this short time span is difficult to grasp. Partly this is because we have no relatives that remember pre-capitalism, and the oral tradition that used to pass historical knowledge from generation to generation has largely been disrupted by first literate and then media culture. There have been so many rapid technological changes over the past century that they add up to a kind of rupture in human memory. We have become future-oriented, addicted to novelty and ‘into’ discovering (and possessing) the latest thing in our rootless consumer universe.

The commons played a large role in both economy and society all through the experience of pre-capitalist societies of various types – the commons being a shared resource from which each had the right to draw their livelihood, even if this livelihood was unequally shared under feudal conditions. The health of the commons – pasture land, gardens, woodland, water supply – was the concern of all. Economy was, as the social theorist Karl Polanyi has so brilliantly analysed, ‘socially embedded’ in such societies and subject to the prevailing values of that particular society rather than the kind of all-determining external force it has become under capitalism.1

We speak of the stock market, for example, as if it is a living person – sometimes confident, sometimes jittery, feeling robust, suffering an attack of nerves and so on; a kind of Old Testament Mammon god

As market relations began to disentangle the economic from the social and cultural, ever fewer human checks remained to slow down or redirect the disembodied drive for profit. Today we experience the economy as a kind of out-of-control external force disconnected from human will. We speak of the stock market, for example, as if it is a living person – sometimes confident, sometimes jittery, feeling robust, suffering an attack of nerves and so on; a kind of Old Testament Mammon god.

Those who want to transform or even just tinker with our current system of corporate capitalism are confronted with a formidable task. What we face is something very far from the much discussed ‘level playing field’ that is supposed to characterize democratic competition. Those who want change by and large have little wealth. Those who wish to defend capitalism, by contrast, have a great deal of it and they have become expert at using their wealth to shape the political process to get what they want. Money and power are by now so closely linked together that it is discouraging even to contemplate how it could be otherwise.

The result is that ‘politics’ (how we organize our affairs) has become such a dirty word that people eschew even such minimal public involvements as casting their ballots. There is, moreover, an unspoken but widely held view on the political Right that vote suppression (actively finding ways to discourage people from voting) is a legitimate tool in the political war chest.

One of the features of capitalism that has enabled it to survive is its ability both to create and to take advantage of its economic crises. This phenomenon was investigated and systematized by the political economist Joseph Schumpeter, who referred to it as a tendency for ‘creative destruction’. Schumpeter saw this underlying attribute as a kind of positive resilience that keeps capitalism from collapsing under the weight of its own contradictions.

For centuries, its opponents have looked to such crises as a source of hope, believing that the beast had finally overstepped the mark and could be brought to ground. These booms and busts are not new but have supplied the rhythm of the deployment of capital from the 16th century onwards, destabilizing people’s lives through the enclosure of the commons, the expansion of empires, and the shift of industry from less profitable to more profitable regions.

This destabilizing effect has always been a major source of the dissatisfaction with capitalism. It has inspired people to search for alternatives that provide a more balanced and stable form of existence, where they can count on regular access to the fundamentals of their survival – food and shelter, peace and community. Capitalism constantly puts these things at risk in its restless search for new avenues of profitable growth.

Those who, for moral, economic or political reasons, are opposed to the insecurity, inequality and egoism that seem inevitable consequences of the capitalist way of operating do, however, face a significant uphill challenge. Not only has capitalism shown great resilience in overcoming the periodic crises it has faced but it has also even been embraced by its one-time ideological opponents: state socialism in China and the countries of the former Soviet bloc. These societies have now surrendered to the market as the most effective economic driver of future development.

Today, most of the public economies of such countries have come under the sway of private capital – much of it foreign. China, in particular, has become ‘the workshop of the world’, with its labour force working under extremely exploitative conditions within a political system that still proclaims itself communist. Yet dissenting activities still go on. ‘Mass incidents’ of labour unrest in China rose from 70,000 in 2004 to 180,000 in 2010 with virtually every economic sector affected.2 This has led some to identify contemporary China as ‘the epicentre of global labour unrest’.3 It is certainly one of the ironies of the modern world that what remains of this failed experiment in communism is being used to undermine the struggles of workers for a better life.

Our current phase of capitalism is underpinned by a much named but too little understood political philosophy called neoliberalism. Usually this is a phrase used by critics rather than proponents of capitalism. Neoliberalism is a project that reduces all human activities to ‘homo economicus’ and takes in almost every sphere of life, from criminal justice to immigration. It has become a sort of moral-rearmament political doctrine to accompany the market fundamentalism of economic policy.

In these highly individualized economic circumstances, it is not surprising that the slogan that has become most popular with panicky voters during repeated election cycles is: ‘it’s the economy, stupid’. This captures the limits of government possibility as seen through neoliberal eyes – no room for compassion, intergenerational consideration, concern about the planet, international responsibility or democracy beyond the narrow confines of elections. There is simply no meaning outside the cold calculus of the market.

This is now starting to undermine the institutions with which the establishment has traditionally been identified – the legal system, the police, parliament, local government. Under earlier forms of liberal democracy these could be counted on to play a moderately autonomous role in tempering capitalism. Under neoliberalism they are increasingly shaped so that they will not be obstacles to market priorities. Neoliberalism redefines democracy as a kind of market rationality – and the only criterion to judge our political class by is how successful they are in ‘marketizing’ human relationships. This makes for difficult terrain on which alternatives to capitalism must be built.

The people’s flag is deep and red