Young delegates inside the Paris climate summit were frustrated that the media were ignoring key issues. So yesterday, they took matters into their own hands, Morgan Curtis reports. 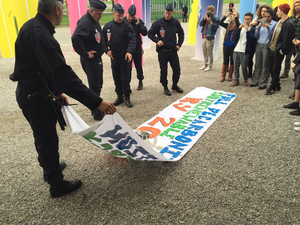 ‘My daughter is 7 days, 20 hours old. I really should not have left her, or her mother, but I am here, speaking for her.’ With that declaration of love, Dingdong Dantes, youth commissioner for the Philippines, silenced the room. He was speaking at a high level announcement from the Climate Vulnerable Forum inside COP21 on Monday evening: a brave call from the countries most vulnerable to climate impacts to demand climate justice. Joined by leaders from Costa Rica, Bangladesh and Ethiopia, they issued the Manila-Paris Declaration, boldly demanding climate change be limited to 1.5℃ by all countries signing on to a long term goal of decarbonization by 2050.

In the days previous, youth from around the world gathered at the 11th Conference of Youth to launch a campaign: #ZeroBy2050. We sat in circles, some of us on the floor, for many a meeting, and discussed how we could best push for some sort of outcome from COP21. As young people we have been alive as long at these conferences have been happening, at most. We feel the impacts of climate change now, and don’t often allow ourselves to imagine our futures. We started wearing a circle of face paint around our right eyes to symbolize 0 – zero fossil fuels by 2050, necessary to keep warming below 1.5℃. Some of us have the immense privilege to be accredited to be working inside the UN space. In here, our face paint says we are watching you.

Not everyone’s voice is heard at the UN. The historic announcement on Monday from the world’s most vulnerable countries was drowned out by coverage of the world’s leaders. On Tuesday, YOUNGO, the youth constituency, held a formal press conference to articulate our demands. Four journalists came. One question was asked. How to get their attention?

With Paris under state of emergency no more than two people may gather in a public space with a shared political message. Inside COP21, it is always a state of emergency. Every banner must be approved by the UN. You must stand in a certain place, and deliver specific messaging. You may not call out any individual country. You must apply to take action 24 hours in advance. You may not be approved.

Our approval came through. Circles showed up again during late night banner painting at the art space. We sang together. We laughed together. We spilled paint and covered it over with a hastily sketched clenched fist. We drafted press releases, recruited photographers and refined messaging. We approached random journalists in the hallways and asked if they would come.

‘Growing up in foothills of the Himalayas, I was 10 years old when I realised the urgency of climate action. I began to see the mountains melt, glacial lakes flood, and the human impacts of the climate crisis on the 2.3 million people who depend on it for fresh water and natural resources,’ said Sagar Aryal, 20, standing before the crowd of press with nearly one hundred young people from around the world behind him. Sagar was 10 years old when he founded the Sano Sansar Initiative for climate action in Nepal. He’s here in Paris as Coordinator of Climate Strike, a global movement of young people skipping school for climate action. After Sagar came AJ from the Marshall Islands. ‘I want you guys to look at me, and think about my people,’ he said. ‘One point five to survive, one point five to strive,” and the crowd began to chant: One point five to stay alive. One point five to stay alive.

A crowd gathered outside of the building after the action. We were surrounded by the flags of the world, outside the security that keeps the citizens from their ‘leaders. Daniel Jubelirer, RYSE Youth Council member of Earth Guardians, had brought together a second group of young people: those not accredited to be on the inside. They all had O’s around their eyes as well. ‘Take off your badges,’ someone cautioned those of who had just come out. ‘We don’t know what’s going to happen.’

We began to sing. Quietly at first.

World leaders and the media are ignoring the only safe climate deal at Paris and so young people are taking action.For more grassroots coverage of the Paris climate talks visit www.newint.org/live/paris

We walked through the flags of the world, heading towards the ‘Green Zone’, the public area of COP21. This space, controlled by the French police instead of UN security, does not have yet have any protocol for actions. Bolstered by supportive cheers and the growing size of our group, we unfurled our banners and formed a march through the booted and suited delegates heading back inside.

A line of x-ray machines and security met us. Banners stuffed in backpacks, we spread out and each made it through successfully. We were soon surrounded. Close to 25 police gathered around us, faces solid, preventing us from entering the building. Before we knew it, we were back outside. The police closed up the banners, and summoned representatives from the UN secretariat. No one was allowed to leave. Anyone entering the building with a painted eye was stopped and brought to join us.

‘Today we are detained by the police for our eye make-up. Of course. We are in the fashion capital of the world,’ Maria Theresa Lauron, from the Philippines, had joined us as we marched. Banners confiscated, we were put back in one security line, for an even more thorough search to be undertaken. We gathered one-by-one on the other side, shaken, and formed a circle, holding hands. Tetet spoke, this time not a spokesperson to a crowd of journalists, but to each of us, human to human. ‘We stand here with you young people from the US, the belly of the beast. The country with the world’s second highest global emissions and most historical debt to the South. You are choosing to speak truth to power. For us, fighting for climate justice is not a choice. It is a necessity.’

Emboldened by Tetet’s words, we picked up our song once more, marching and gathering smiles and camera snaps all around the building: one point five C now… Hearing word that security was now diverting all those with the painted 0, we washed our faces clean and were let back inside the UN, for now.