Avaaz is triumphant, but the Paris Agreement promotes the kind of policies that have failed us so far, write Marienna Pope-Weidemann and Samir Dathi. 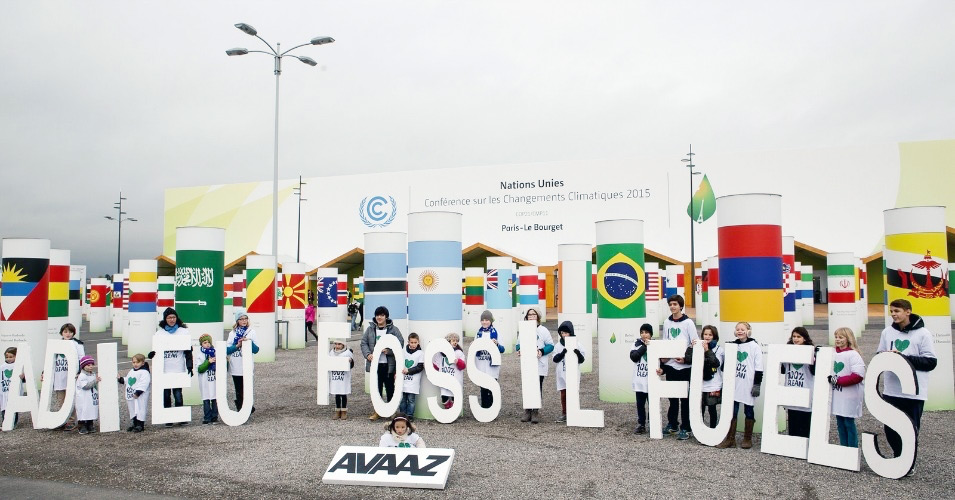 The betrayals of the Copenhagen summit strengthened the climate justice movement because it demonstrated clearly that salvation was not coming from above. We came to Paris with eyes wide open, looking to each other instead of the summit, bracing ourselves for a weak deal and planning for the future.

This shameful agreement fell below even our expectations. But you wouldn’t know it listening to the corporations and politicians – or to Avaaz, which is singing the same tune. World leaders, they write, have set a ‘landmark goal that can save everything we love.’ They call the accord ‘a brilliant and massive turning point in human history… This is what we marched for.’

Well it’s not what we marched for. As New Internationalist explains, it fails on every front: on emissions reduction, on reparations for the global South, on the rights indigenous communities and working people the world over. Under this deal, we’re looking at 3-4 degrees of warming, and that is catastrophic.

Avaaz was a driving force behind these massive climate marches this year and last, but this movement’s centre-ground is riven with contradictions. The 2014 mobilization, for example, was supported by the Climate Group – a green-washing front for big bad wolves like BP, Dow Chemicals, Goldman Sachs and J.P. Morgan – and Avaaz’s founder used to work for the Gates and Rockefeller Foundations. And Unilever, a leading food monopoly with an atrocious labour and environmental record, also sponsored that march.

That would explain why $220,000 went on glossy posters inviting Wall Street bankers to join the demo. It’s a sound investment if you believe the 1 per cent are the real agents of change. It would also explain why Avaaz didn’t want the Global South bloc, Wretched of the Earth, leading the climate march on 29 November. Black people shouting about economic colonialism are not who bankers want to see leading a march of thousands.

But the agreement fails even by Avaaz’s own standards. They campaigned for a concrete and dated commitment to 100 per cent clean energy. What we got was a heavily padded commitment to ‘net-zero’ with exactly the kind of policies that have failed us so far. And it’s not even binding.

But what’s really left us speechless is the apartheid analogy. ‘Like our brothers and sisters in South Africa who won legal equality… we are on the brink of that new, sweet wind,’ writes Avaaz. It’s revealing that in referencing this movement, they echo not Mandela, but British Tory Prime Minister Harold Macmillan, who famously spoke of the ‘wind of change sweeping through Africa… whether we like it or not.” (He didn’t like it.)

In one sense, this is deeply insulting. Avaaz may take in its marches and petitions, but it hardly compares to decades of mass-resistance in the face of brutal state repression.

However there is an unintended sense in which the apartheid analogy is entirely appropriate. The courageous South African liberation struggle ultimately ended with a sellout in which the forces of neoliberalism were unleashed on the most oppressed.

Avaaz asserts that “the fall of Apartheid led South Africa to the single most bold and progressive constitution in the world,” but as we know this is true only on paper. In reality it was a huge step back from The Freedom Charter, which had been the political heart of South African resistance.

Compromising on Freedom: a Cautionary Tale

In 1960, as the ‘winds of change’ reached gale-force and national independence seemed only a matter of time, Britain was under pressure from the USA to de-colonise. America wanted access to South African markets and feared a radical left-swing in South Africa unless it was granted independence. ‘It is our earnest desire to give South Africa our support and encouragement,’ said Macmillan, ‘but… [frankly] there are some aspects of your policies which make it impossible.’

It doesn’t take a genius to work out which aspects he was talking about: The Freedom Charter’s calls for free education and decent housing; living wages and shorter work hours; land for the landless and the restoration of the national wealth to the people. All the things apartheid kept cordoned off from the black majority; all the things the climate justice movement wants for the world today; the things this crisis give us a ‘once in a century’ chance achieve.

Since the ANC took power, the number of black South Africans living on $1 per day has doubled and average life expectancy has dropped by thirteen years. Homelessness has risen and by 2004 over a million people had been evicted from their farms. Protesting workers are murdered by police and small-scale farmers are on the frontlines fighting pollution and industrial agriculture. The gap between rich and poor greater now than under the apartheid regime; in fact along with the Seychelles, South Africa is the most unequal country in the world.

Even before Mandela was released, the ANC was cutting secret deals with the Anglo-American Corporation and the Afrikaner elite. Winnie Mandela, herself a leading figure in the anti-apartheid movement and ANC government, said in 2010: ‘Mandela let us down. He agreed to a bad deal for the blacks. Economically, we are still on the outside. The economy is very much “white”. It has a few token blacks, but so many who gave their life in the struggle have died unrewarded.’

So, modern South Africa is about as progressive as COP21, which LDC Watch eloquently describes as ‘a nail in the coffin for justice for the least developed countries’. And the struggle against climate apartheid is only beginning.

What The Freedom Charter once called for are all the things the climate justice movement wants for the world today. And they are the very principles COP21 has turned its back on.

COP21: The Good, the Bad & the Ugly
Youth stand with vulnerable to demand climate justice