The Global Village for the Alternative

Activists in Paris are laying out inspiring visions for a fair and sustainable future – with the help of 196 stolen bank chairs, writes Samir Dathi. 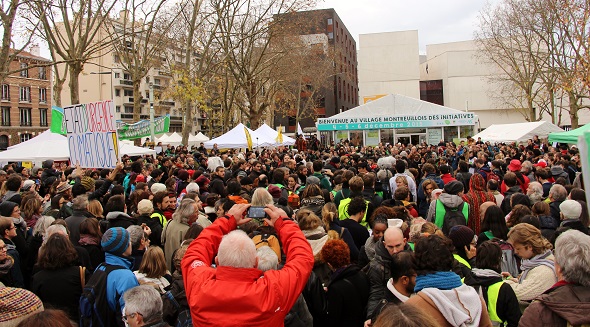 ‘Bourget is full of thieves and murderers! They have no interest in the wellbeing of the planet!’ The speaker’s defiant words were met with cheers of approval from the hundreds of spectators that formed a large ring around her in the town square.

I had just arrived at the Global Village of Alternatives in the picturesque suburb of Motreuil in Eastern Paris on Sunday. It was a frosty noon, and Cindy Weisner, organizer with the Grassroots Global Justice Collective, was addressing the crowd.

The Village was a bustling two-day festival, and part of the Citizen Summit for Climate, set up as a counter-forum to the COP21 proceedings at Le Bourget conference centre. The square and adjoining streets were divided into 11 thematic zones, each packed with an array of stalls, tents and activists from campaigns across the world all committed to fighting climate change. Around 28,000 people visited the festival over that weekend.

I edged closer to the front of the crowd as Weisner continued her speech: ‘Tax havens are a black hole of global finance where at least 20 trillion dollars vanish…Tax havens lie at the heart of the global crime economy in all its forms: drugs, weapon trade, terrorism, money laundering.” The theme of this particular meeting was tax avoidance. World leaders regularly complain that the money for adaptation and mitigation isn’t available; but we know that hoards of cash sit undeclared in offshore accounts collecting interest for rich corporations. Not paying one penny of tax. To make matters worse, many invest in fossil fuels. Yet some of these same corporations, such as the French bank BNP, have the audacity to sponsor COP21. A classic example of greenwashing.

To symbolise the people’s requisitioning of this offshore wealth, a procession of 196 international delegates representing a diversity of movements had marched into the square minutes earlier, each one carrying a chair seized through countless acts of civil disobedience from various banks around France in the previous weeks. Those chairs were then used as seats for the meeting (which was dubbed ‘the 196 Chair Summit’)! It was a wonderfully creative and well-organised programme of direct action. When the chairs were brought into the square, the crowd had chanted ‘On est tous faucheurs de chaises!’ (‘We are all reapers of chairs’ – ‘reaper’ being a play on words meaning both the farmers who reap the harvest and the activists who reap the chairs!).

One of the main organisers of the festival was Alternatiba, a grassroots network which discusses concretely what an energy friendly society would look like. It was founded at the first village for the alternative in Bayonne, France in 2013, initiated by the Basque environmental group Bizi!. It has since spread to numerous cities in France and beyond: Switzerland, Belgium and even the Polynesian islands. Their objective is for people to set up independent Alternatiba initiatives all over the world, to enact a vision for a sustainable and just society.

Alternatiba works closely with ANV COP21 (‘ANV’ stands for Action non-Violente), another organizer of the festival. Whilst Alternatiba focuses on the vision, ANV COP21 is all about civil disobedience. One activist explained to me that the two groups act as connected prongs of a single united strategy.

‘Our inspiration is Martin Luther King,’ explained Remy, an ANV activist who I met at their stall. ‘Citizens are frustrated. But we tell them we can use COP21 to organise non-violent action and build a mass movement.’ Remy and his comrades played a key role in the demo at Le Place de la Republique on 29 November where 10,000 shoes were laid following the ban on the march.

Everyone I spoke to was clear that we could not put any faith in the negotiations at Bourget. They condemned Hollande’s calling of a state of emergency and his boycott of the march, pointing out that the mass gatherings at the Christmas markets had been allowed to continue; so why not the protest? The ruling class clearly prioritise our inalienable right to shop over our right of assembly. As Remy put it: ‘The real state of emergency is the climate state of emergency.’

Yet the mood that day was hopeful – infectiously so. The climate justice movement has come a long way since Copenhagen. That was a serious wake-up-call for many. Our movement is less naive now: fewer activists are content to meekly petition politicians for change, realising that real change ultimately comes from direct action at the grassroots. And there was plenty of evidence of that at the Village. Activists are currently planning for the big day of civil disobedience on 12 December. One that is non-violent but defiant.