Development in the industrialized world has come at a high price, writes Mohamed Adow. 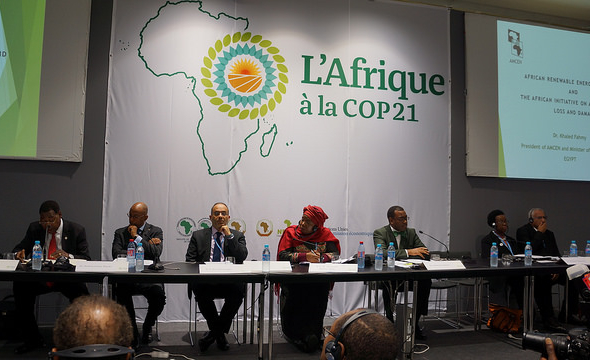 Rwanda is attending the Paris Climate Talks (COP21) and calling for strong action on climate change to reduce temperature increases to below 1.5 degrees Celsius.
Photo: MINIRENA Rwanda under a Creative Commons Licence

Having attended six UNFCCC climate summits in as many years, it’s Paris that has left me hopeful about the prospects of seeing the beginning of the end of our reliance on fossil fuels.

The source of my optimism was an announcement last week that attracted not nearly as much media attention as it warranted: perhaps because it challenged the dominant narrative about Africa’s role in the climate talks, transforming its leaders into the front-runners, not the followers, of the race to a renewable future.

Supported by the G7, this impressive initiative will help the world’s most resource-poor continent to develop sustainably, improve well-being, and enhance both energy-based and economic security.

What makes the AREI particularly laudable is that its goals are front loaded: Africa plans to act before 2020, when the rest of the Intended Nationally Determined Contributions (INDCs) towards mitigating global warming will officially be set in motion.

This is despite Africa having the world’s lowest carbon footprint. The continent is home to approximately 14 per cent of the global population. Some 600 million of its 1.1bn citizens still have no access to electricity.

Meanwhile, millions of Africans suffer some of the harshest impacts of climate change – be it drought, erratic rains, food insecurity or floods in countries such as Malawi. This is despite them having done the least to contribute to it.

Growing up in northern Kenya, I know only too well that energy sources in my home continent are often inefficient, imported, costly and environmentally unsustainable, largely dependent on wood and fossil fuels.

I have seen firsthand how a lack of energy locks people into poverty, poor health, low education levels and limited opportunities.

That’s why I am exceptionally proud that Africa, in its bid to provide universal access to clean, appropriate and affordable energy, is determined to leapfrog over dirty energy and tap into its incredible potential for renewable energy – whether solar, wind, small-scale hydropower, geothermal or biomass.

It was African leaders who set the pace in Paris by outlining concrete plans for a low-carbon trajectory to pursue sustainable development. A pace that has been lacking in some aspect of negotiations over the last fortnight.

My NGO, Christian Aid, has long been calling for a big shift from fossil fuels. We believe it is time for the world to follow Africa’s lead and start talking about shifting trillions of dollars away from fossil fuel infrastructure, exploration or production and into renewable energy investment. We need to show the private sector that it can get good returns from investing in renewables, whether in Africa or elsewhere.

Likewise, rich nations must be willing to offer adequate, predictable funding, plus technical support, to help low-capacity climate-vulnerable countries adapt to and protect themselves from the adverse effects of their changing climate.

With the Paris deal only hours away from being sealed, the only hope of achieving a safe and secure future is for rich nations to throw their full weight behind ambitious schemes such as the Africa Renewable Energy Initiative.

We cannot afford to ignore the pleas of the most vulnerable and most marginalised – those on the frontline of the climate crisis. Getting behind the renewable revolution is the only way to ensure those voices are heard.