Hail Caesar! The personal whim of not so fair trade

The struggle for real Fairtrade is reminiscent of gladiator battles, writes Ben O'Hanlon. 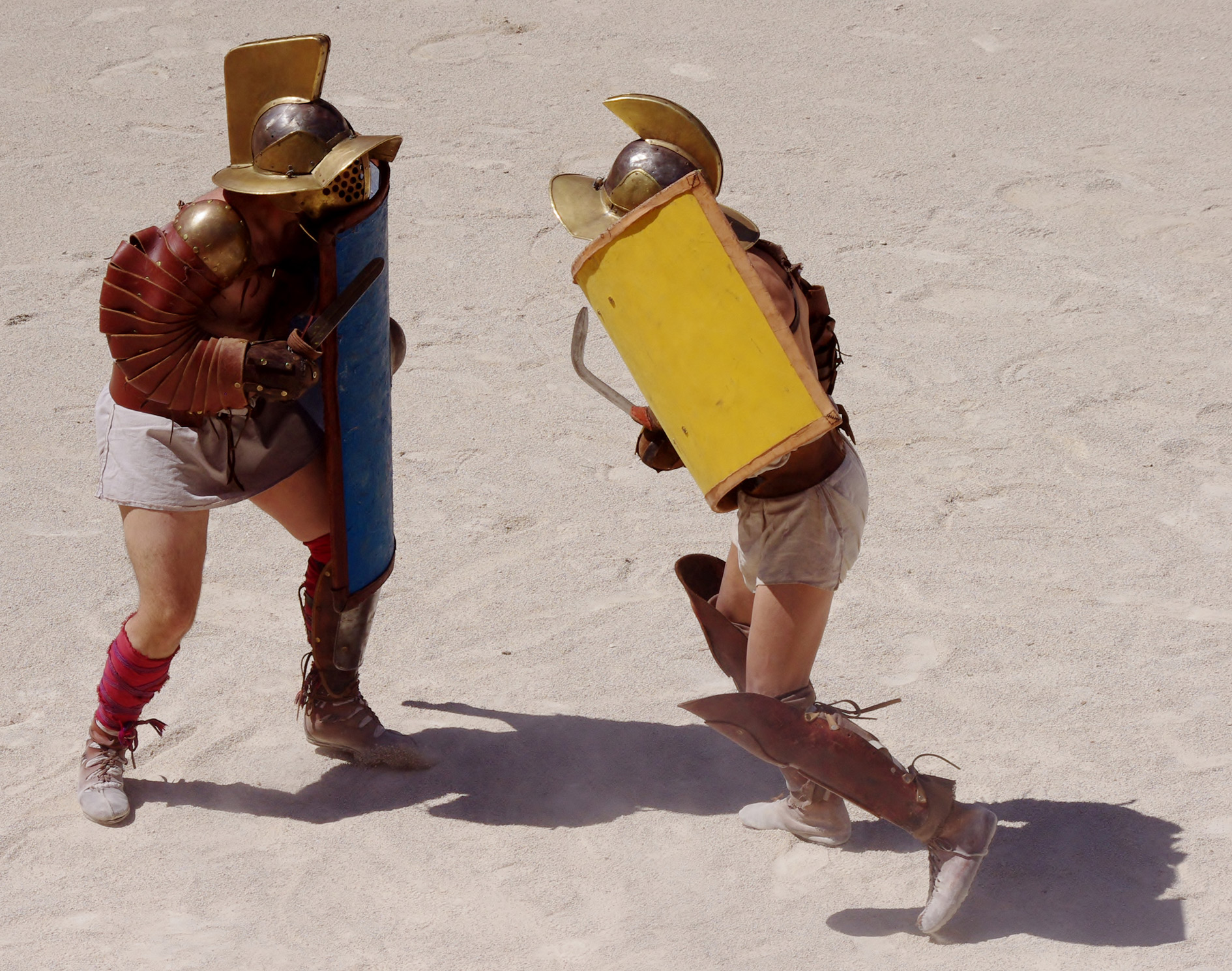 A Murmillo battling a Thracian in the ampitheater of Arles.
Photo: Ken & Nyetta

This March we find ourselves in Fair-trade Fortnight, that two week period when we are invited to reflect on our purchasing choices and to pay a little extra for our coffee, safe in the knowledge that the premium will go to help the producers .The UK is one of the biggest Fairtrade markets in the world, with around 4,500 Fairtrade certified products on sale and total annual sales of $2.4 billion in 2014. Worldwide there are over 1,200 Fairtrade certified producer organizations in 74 countries.

Yet there is something fundamentally unfair about Fairtrade. Leaving aside the question about whether Fairtrade actually succeeds in raising living standards for the world’s poorest farmers, we should question the right of Western consumers to dictate those living standards in the first place. As I stand at the supermarket shelf this week holding a jar of Fairtrade coffee in my right hand and its ‘conventional’ non-Fairtrade equivalent in my left, I am reminded of those gladiatorial scenes at the colosseum as an expectant crowd looks towards the Emperor and waits to discover the fate of the battle-wounded fighter below. Will I choose ‘thumbs up’ for the Fairtrade Kenyan ground beans, or ‘thumbs down’ and I’ll pocket the saving?

There are over 1.5 million farmers and workers in Fairtrade certified producing organizations worldwide, but there are around 600 million farms worldwide. So what about the rights of those farmers making the cheaper coffee? Or the rights of those forced to work on land that they don’t have any control over because it was taken in a land grab to form a plantation, or those who have been encouraged to rely on costly seeds and agrochemicals? There seems little hope for an optional price increase to address these fundamental wrongs.

Fairness isn’t something delivered through the purchasing choices of the powerful. It is achieved when we all agree to reject a system which thrives on the perpetuation of poverty, inequality and injustice. Fairness isn’t a choice; it’s a fundamental human right.

This Fairtrade Fortnight perhaps rather than just taking the annual opportunity to save the world by paying an extra 75 cents for our coffee, we should instead feel insulted by a system which forces us into such arbitrary choices rather than requiring true fairness at its core.

The point is not that we should reject Fairtrade, but rather that we should demand it universally, without prejudice, and without choice. The first step towards this must be better regulation of our food system to banish the worst of the exploitative practices. War on Want supports the Make Fruit Fair campaign, for example, which calls for better regulation at the European level of international trade in tropical fruits.

We also support the calls of farmers and growers for an increase in the powers of the Groceries Code Adjudicator, the UK body responsible for overseeing the relationship between supermarkets and their suppliers. War on Want was part of the coalition calling for a strong Code of Practice and the appointment of an adjudicator to enforce it. Currently the adjudicator only has the power to investigate supermarkets on the basis of a complaint, rather than a more proactive compliance inspection. We and others are calling for powers for the adjudicator to consider impacts all the way through supply chains and to ensure greater price transparency by publishing information about the profit margins of producers, processors and retailers.

These measures can help to move us towards a more universal system of institutionalized fairness, rather than a part-fairness lottery. But the story doesn’t end there. Ultimately it is the corporate grip over food production by large-scale agribusiness which puts profit before people and creates the conditions and incentives for prices to be forced down in the first place. Only by challenging this can we properly regain control of our food system and protect farmers.

In doing so we must adopt the principles of food sovereignty, a system of food production which understands that food is first and foremost a basic human right, rather than a commodity for profit. Food sovereignty calls for genuine agrarian reform to ensure that farmers have control over the land that they work. It calls for sustainable agricultural practices which respect and preserve natural resources. It supports small-holder farmers over big agri-business as the necessary mechanism for achieving these objectives, and it says that farmers should have democratic control over the agricultural policies which affect them.

Such a system might finally deliver true fair trade and finally relieve us of the burden of Kingmaker as we browse the shelves and fill our baskets.

Ben O'Hanlon is Senior International Programmes Officer (Food Justice) at War on Want. More information about food sovereignty and War on Want’s work with its partners worldwide is available here.

Worse than fiction: discrimination against women
If Google and Facebook can flip elections does code now rule the real world?