Jan Rocha on the challenges and paradoxes in one of the world's most unequal countries. 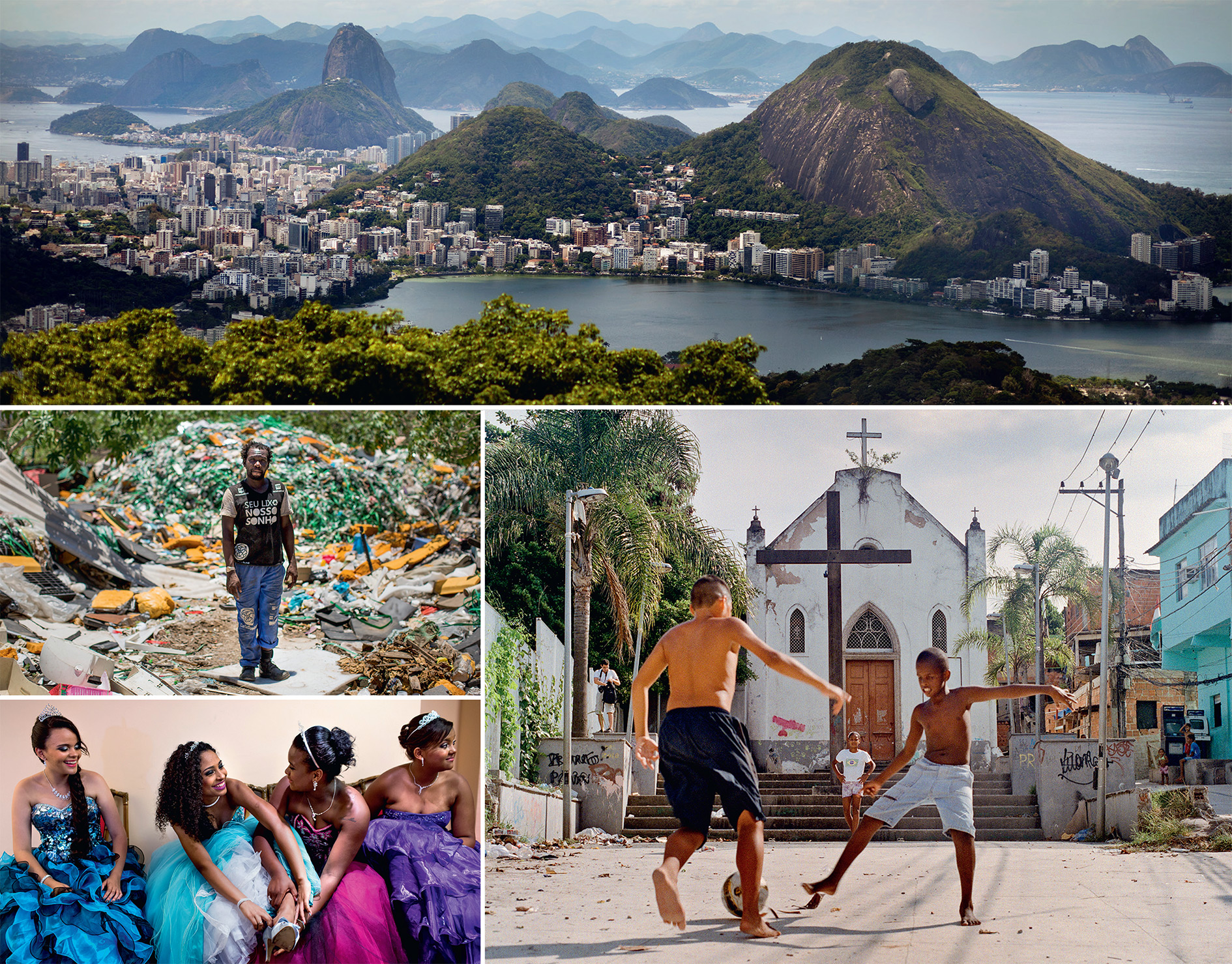 Clockwise from top: The iconic view of Rio and the Lagoa da Zona Sul; the beautiful game outside a church in Providencia, Rio’s oldest favela; 15-year-old belles from the Cerro-Korah favela attending a debutante ball organized as a good-will gesture by the Pacifying Police Unit; Zumbi da Silva, a former rubbish-picker in Esqueleto who now works in a new recycling co-operative.
Photos by Lianne Milton / Panos Pictures.

Brazil is the country of the future, and always will be, Brazilians ruefully used to say. Then, in 2002, the Workers Party (PT) came to power, led by the immensely popular trade-union leader Luis Inacio Lula da Silva, and it seemed that the future had finally arrived.

Re-elected in 2006, his two terms in office coincided with a boom in commodity prices and the discovery of huge offshore oilfields. The economy grew at over seven per cent per year and – thanks to groundbreaking income compensation programmes, a real rise in the minimum wage, and full employment – extreme poverty was all but eliminated. Millions who had never previously had a bank account became consumers and credit-card holders. Primary-school enrolment reached almost 100 per cent, child mortality fell dramatically, and quotas and government loans opened up higher education to hundreds of thousands who had never dreamed of going to university.

But the dream was short-lived.

In 2014, Dilma Rousseff was re-elected president for the fourth consecutive PT government, just as Brazil began to be hit by China’s slowdown, the slump in oil and commodity prices, and the bad economic decisions of her first government, which squandered the bonanza years. Together with the economic downturn, the revelation of a vast multi-million-dollar corruption scheme involving state oil company Petrobras, major construction firms and the PT, led to a nosedive in her popularity. Although the corruption scheme began under previous non-PT governments and involved politicians from many parties, the media focus was on the PT. As a result there were demands for her impeachment from a hostile Congress, the conservative media, and sections of the electorate. By 2016, Brazil had lost its status as an attractive emerging market and had plunged into recession, with double-digit inflation and soaring unemployment. 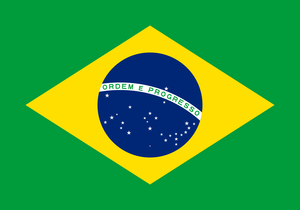 The failure of Brazil’s first leftwing party in power to carry out big, bold reforms and dismantle an extremely unequal society was a huge disappointment to many of its members, who had hoped for ambitious land reform to benefit millions of poor rural labourers, and a crackdown on billion-dollar tax evasion by the wealthy. Instead, obliged to form coalition governments to get a majority in Congress, the PT made alliances with the same corrupt politicians they had criticized while in opposition. Big business and large landowners found they had nothing to worry about, after all.

Besides these huge political and economic problems, Brazil also faces the consequences of climate change, propelled by deforestation of the Amazon. PT governments, ignoring the terrible cost to indigenous communities, have pushed ahead with giant billion-dollar hydropower dams on Amazon rivers, in preference to renewables like wind, solar and biomass, all of which are abundantly available. The exceptionally harsh year-long drought of 2015 contributed to the proliferation of the Aedes egyptii mosquito, causing widespread epidemics of dengue fever and spreading the zika virus, suspected of causing micro-encephaly and brain damage in thousands of newborn babies.

Yet while the PT government has faltered and, in many areas, failed, Brazil remains a country free from the major ethnic and religious conflicts that have torn apart so many others. At the same time, there is a paradox: with so much going for it, why is it still one of the most unequal and violent countries in the world? Between 1980 and 2013, almost half a million young people aged 15 to 29 were killed by guns. A disproportionate number were black. For many, this is the legacy of almost 400 years of slavery, and Brazil still has a long way to go to wipe it out. 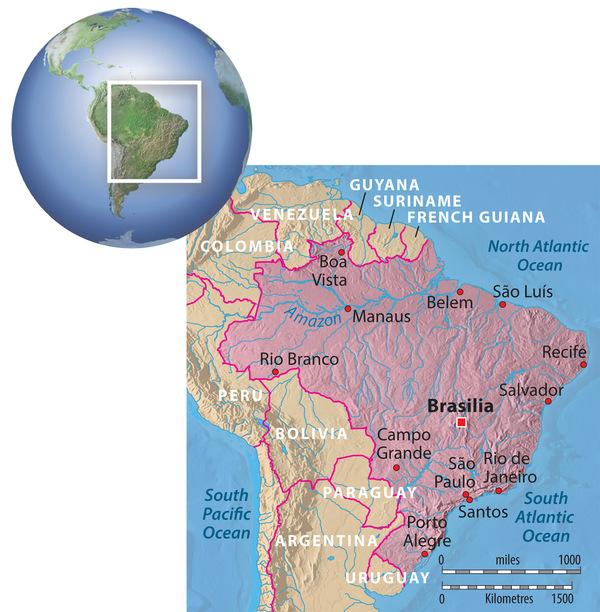 Leader
Dilma Vana Rousseff, re-elected in 2014, is Brazil’s first woman president.
Economy
7th largest in the world. GNI per capita $11,530 (Argentina $13,480, Bolivia $2,870, United States $55,200). An extremely diverse economy, with significant agricultural, mining, manufact-uring and service sectors. In the first nine months of 2015, the economy shrank by 3.2%. Brazil became a net external creditor in 2008 but most recently two international credit agencies downgraded the country to ‘junk’ status.
Monetary
Real (plural Reais).
Main Exports
iron ore, soybeans, sugar, poultry, vehicles. Coffee, once Brazil´s top product, is now only 3% of exports.
People
206.1 m, including almost 900,000 indigenous people. Less than 1% are immigrants. Annual population growth rate 0.9%. People per sq km 25 (UK 267).
Health
Infant mortality 15 per 1,000 live births (Argentina 11, Bolivia 31, US 6). Lifetime chance of maternal mortality 1 in 780 (Portugal 1 in 8,800). HIV prevalence 0.6%.
Environment
The Amazon basin occupies half of Brazil’s total area and influences rainfall in other regions. The Northeast, where a third of the population lives, has a large semi-arid area subject to drought. Brazil has 12% of the world’s fresh water, but continuing deforestation of the Amazon forest and the cerrado, driven by agribusiness, is contributing to climate change and more extreme weather events.
Culture
Brazilians are descended from the many indigenous peoples who inhabited their land: African slaves from many different countries, Portuguese settlers, and European and Japanese immigrants.
Religion
Catholic 65%, Protestant, including Pentecostal, 22%. Other religions, including Afro-religions, 5%. Non-religious 8%.
Language
Portuguese (official). Over 150 languages are also spoken by 246 indigenous groups.
Hdi
0.755, 75th of 188 countries.

Income Distribution
Has improved in the last 12 years but still one of the world’s biggest gaps between rich and poor. Top 10% are 42 times richer than the bottom 10%.
2004
Literacy
The official figure is 91% but an estimated 18% of adults are functionally illiterate. Fundamental education is now mandatory for children aged 6 to 14. In 2012 quotas for black and indigenous students were introduced at federal universities.
2004
Life Expectancy
75 years (Argentina 76, Bolivia 68, US 79). A plunging fertility rate means a growing proportion of older people in the population.
2004
Position Of Women
The president is female but women are under-represented in Congress and state assemblies. Violence against women is high, especially in rural areas.
2004
Freedom
No formal media censorship, but physical intimidation of journalists, including assassinations, mostly involving police and politicians in smaller towns.
2004
Sexual Minorities
The world’s largest Gay Pride Parade takes place in São Paulo, TV soaps now feature gay characters, but homophobia is strong. In Congress conservative Pentecostals have blocked a bill to make homophobia a crime.
Politics
Elected on a leftwing ticket, President Roussseff is in coalition with a centre-right party. Her orthodox austerity programme has led to surging unemployment and rising unpopularity. Brazil has the highest interest rates in the world (14.25% per annum), but there is still double-digit inflation. If she survives attempts to impeach her, she will probably be a lame duck until her term ends in 2018.