What will it take to get electricity to Africa’s rural poor? Ruth Nyambura explores. 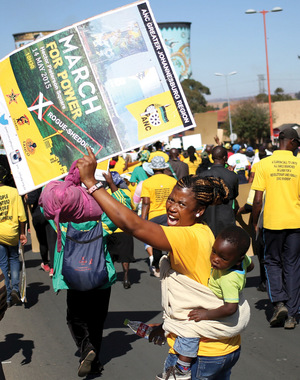 Just too dear: sometimes despite energy being available it can be unaffordable. This mother in Soweto, South Africa, protests against the prices of state utility Eskom.
Photo: Siphiwe Sibeko/Reuters

‘We never know when electricity will be available as it never has a definite schedule,’ says Aker Deng with a sigh. ‘We live each day as it comes with its own uncertainties. There is a private electricity supply run by individuals who buy generators and supply power. This is how I get power for my hair salon in Rock City, Juba. It is extremely expensive – and rationed. I spend about 25 per cent of my income just for electricity.’

In South Sudan, where Deng lives, the UNDP estimates just five per cent of the population has access to electricity.

Building modern, environmentally safe and sustainable energy systems, grounded in the principles of equity and justice, is one of the most urgent challenges confronting Africa. Sub-Saharan Africa, with the exception of South Africa, has the lowest electrification rates in the world, with approximately 620 million people completely lacking any provision.1 This is also the case for 85 per cent of rural Africans. The continent has the highest energy poverty rate in the world.

It also continues to face the worst impacts of the climate crisis, therefore creating a triple crisis of food, energy and climate. Africa is struggling to adapt and ramp up its mitigation measures.

Big does not work

Since independence, most African govern-ments have approached energy provision by seeking finance and development for big centralized energy projects, either large hydropower or fossil fuel based, with on-grid, high-voltage transmission lines serving urban and industrial areas.

For Nigerian environmental activist Nnimmo Bassey the present energy system is characterized by inequality: ‘South Africa, for example, is a country where almost 90 per cent of electricity is produced from coalmines located on the lands of poor black South Africans who are unable to afford the electricity generated, but suffer immensely from the health and environmental impacts of coalmining.’

Such energy projects have not managed to expand electricity access across the continent or made it cheaper but have instead contributed to the emergence of crony capitalism and ever-increasing privatization in the energy sector, and plunged African countries further into debt.

The global commodities boom propelled the fortunes of the extractive industries (mining, oil, coal and gas) in Africa to unprecedented highs. However, with the current fall in commodity prices, largely due to the drop in oil prices and the slowdown in China’s growth, Africa’s fossil fuel projects are at a crossroads.2

What would it require for African countries to leap-frog from energy poverty and over-reliance on fossil fuels to low-cost, socially controlled, democratic and sustainable energy systems? There’s little doubt that Africa has vast potential to transform its energy system. According to the advocacy group International Rivers: ‘Africa has world-class solar potential, a vast belt of clean geothermal reserves, strong winds and great potential for micro-hydro and no-dam hydro.’3 A 2012 report by the European Commission Joint Research Centre established that it would be much cheaper to invest in solar power than to expand the grid.4 And with regard to job creation, renewable energy projects offer much better permanent employment prospects, which large infrastructure projects cannot guarantee.

What kind of clean energy future?

To be clear, African countries have begun the shift to renewable energy systems in both policy formulation and implementation. Morocco is in the process of building the biggest concentrated solar power station in the world, expected to power a million Moroccan homes once it is fully operational in 2018. Kenya has been a continental leader in geothermal power generation and intends to produce the bulk of its electricity in this way. The Olkaria geothermal power station located in the Great Rift Valley in Kenya is Africa’s largest geothermal power project.

Interestingly, both mega projects have received financing largely in the form of loans from multilateral investment banks such as the World Bank and European Investment Bank. In Kenya’s case, a US subsidiary of an Israeli parent company called Ormat Technologies won the project tender (in the 1990s) to build, own and operate the project. They did so by establishing a Kenyan company called OrPower4.

Almost all renewable energy projects follow the path of conventional (fossil fuel based) energy projects in terms of being large, centrally owned and connected to the national grid. Ever since the enforced structural adjustment programmes of the 1980s, there has been a push to have the renewable energy sector operate almost exclusively under the private sector, both domestic and foreign, and to rely heavily on international financing, all under public-private partnership agreements.

Local communities do not have the financial and technological muscle to compete with foreign companies such as Ormat Technologies, nor do they have the political clout to influence policy decisions in the way the World Bank and IMF do. This top-down approach to policy formulation and hijacking of development projects by powerful interests is all too common.

At the Paris COP 21 meeting last December, the Africa Renewable Energy Initiative (AREI) was launched by the African Group to great applause. Its aim is to ‘establish a global partnership to accelerate energy transformation’. According to Dipti Bhatnagar of Friends of the Earth Mozambique: ‘It is imperative that African governments do not turn this proposal into another version of large-scale mega projects that are geared towards making profits for corporations at the expense of the energy needs and human rights and ecological justice for Africans. There is also the question of where the financing will come from, as the proposal remains vague about this issue; this will be the real test, especially given the vested interests around energy provision.’

Ultimately, the question of how to make renewable energy affordable trumps all others in a continent where serious income inequalities exist. In addition, communities must be able to assert ownership over the energy sources, preferably using a mixture of off-grid and mini-grid options.

What is urgently needed for energy democracy in Africa is a two-pronged strategy in which targeted subsidies for the renewable energy sector are dramatically increased and import duties and production costs reduced. Africa must pay particular attention to and invest in appropriate technology transfer, research and development, training and capacity development. And it must challenge rules on intellectual property rights that continue to undermine pro-poor development.

Today there is little evidence to suggest that African governments are relinquishing more control of renewable energy to local communities but are rather fixated on connecting them to the national grid. This approach continues to undermine the quest for a truly democratic energy system, stifles innovation and entrenches the power that monopolies have over the energy sector. Top-down policies remain completely disconnected from the material conditions of people, particularly women, who would have so much to gain if they could access energy to save on tiring physical labour.

An energy revolution cannot occur in isolation: we need to build the power of communities, to design policies that speak to their needs and help address the challenge of poverty. It also requires global support. We hope that AREI will get it from the international community, especially with regard to funding – grants instead of loans, without aid conditionalities – and arresting the power of the local private sector elite and transnational energy corporations. Let us be fully alive to the fact that we are facing a climate catastrophe and that so much depends upon getting right the shift to a truly democratic, socialized, locally managed and clean energy system.

Ruth Nyambura is a political ecologist and eco-feminist from Kenya who focuses on the intersections of gender, economy and ecological justice in the Global South.

Switched on
The Disrupted