Greg Wilpert reports on a country diverse in geography, politics and people. 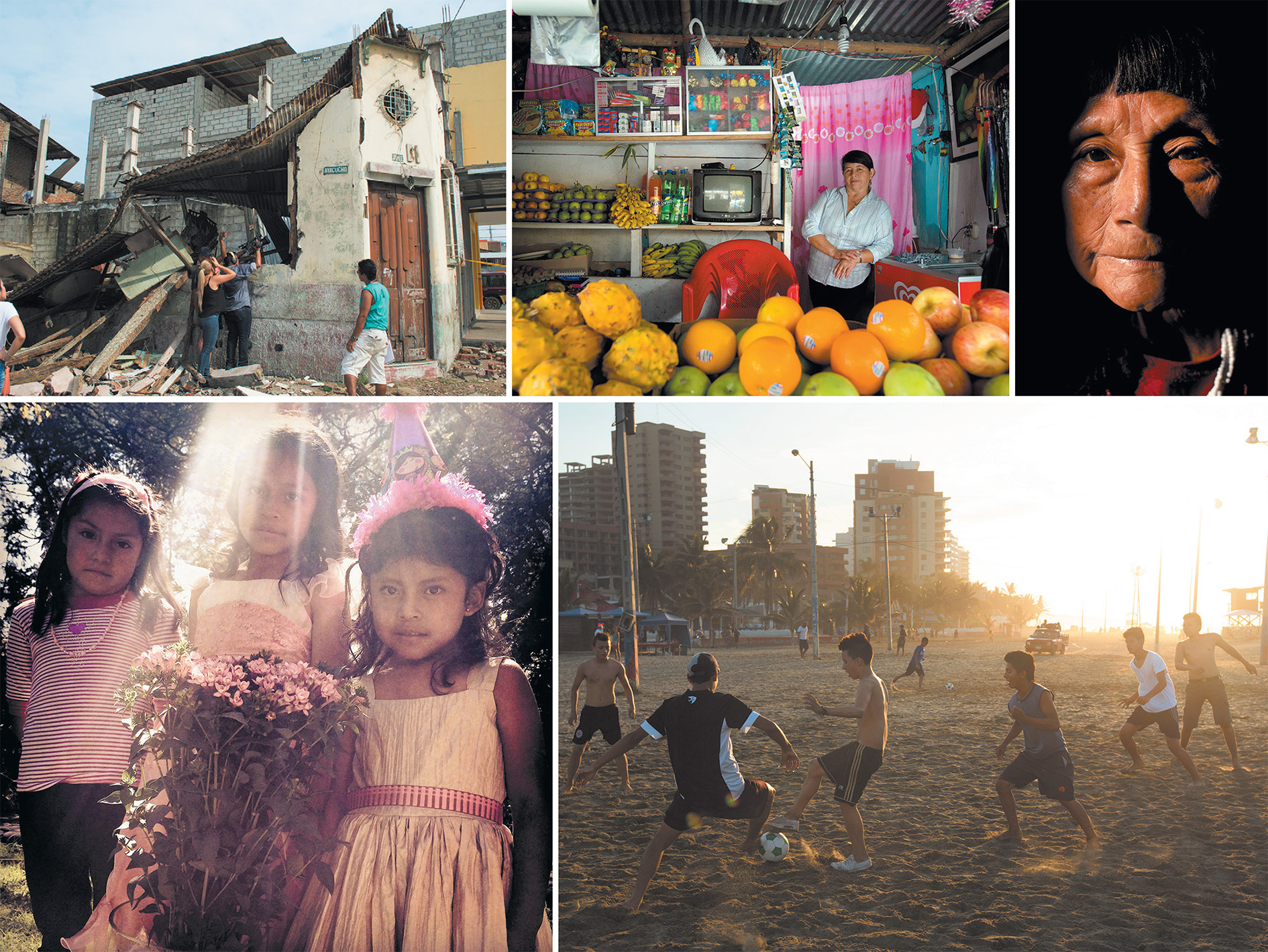 Clockwise from top left: A TV crew documents the effects of the earthquake in Ecuador’s largest city, Guayaquil; Mary Haro in her shop in San Luis, a town growing rapidly due to the Chinese-backed hydroelectric project nearby; Omatoke Nam, 75 when pictured, grew up in an uncontacted rainforest community but now lives in Bataboro, near the Yasuní National Park; boys playing football on the beach in Manta; Brigitte Achance celebrating her fifth birthday in the Tumbaco district of the capital, Quito.
Photos by Ivan Kashinsky/ Panos Pictures , except the earthquake shot by Locowiki under a Creative Commons licence.

In the days following the catastrophic earthquake that struck Ecuador on 16 April, checkout lines at the supermarkets were exceptionally long. Ordinary Ecuadorians from all walks of life came together to buy food, drinking water and other essential supplies for the victims. It was the country’s worst natural disaster in 70 years, which left as many as 1,000 dead, over 10,000 homeless, and caused over $3 billion worth of damage.

The earthquake happened just as the country was entering a recession – global oil prices have reached a new low and the government has already had to cut public spending, especially in investment projects. Despite the poor economic outlook, President Rafael Correa remains the country’s most popular politician.

The reason for Correa’s popularity, especially among the country’s poor, is simple. Since his election in 2006 poverty rates have nearly halved, from 45 to 25 per cent and inequality has decreased significantly. Along with higher taxation of the wealthy, there has been increased spending on housing subsidies, cash transfers for the poor, and a doubling of investment in public education. Also, infrastructure throughout the country has visibly improved, with numerous new highways, universities and public transportation upgrades. 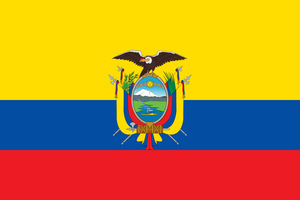 Correa has also brought a measure of political stability. Between 1996 and 2007 Ecuador went through eight presidents and two severe political and economic crises. By the time Correa leaves the presidency in 2017, he will have governed for 10 years, longer than any president since Eloy Alfaro, one of the nation’s founding fathers, who left office in 1911.

One area where the government has faced problems recently is in its relationship with social movements. A significant segment of the fractious indigenous movement, several smaller leftist parties, environmental groups, and a sector of the union movement have criticized the President for going back on a variety of progressive policy promises and for governing in an authoritarian manner. They say he has failed to move away from ‘extractivism’ and oil dependency, from vigorously protecting the environment, and from including social movements in the development of his policies. The most important of these groups is the indigenous movement, which, despite its internal divisions, can claim to represent up to 10 per cent of the population.

The country is extremely dependent on oil. Approximately half of Ecuador’s export revenue comes from oil exports and, at times, depending on the price of oil, this provides a quarter of the state’s budget. Despite the 2008 global economic crisis, Ecuador was able to maintain robust average annual GDP growth of over four per cent between 2000 and 2012. Nevertheless, the fact that the country adopted the US dollar as its currency following the economic resession of 2000 hampers economic policy significantly.

Although Ecuador is a welcoming country for foreigners, some also consider it to be rather conservative and closed. Abortion, for example, is illegal in almost all circumstances. Also, subservient class-based attitudes are still prevalent. Yet the country can boast that it included the indigenous concept of buen vivir (good living) in its 2008 constitution and thereby contributed to the international discussion about how to achieve a non-consumerist and ecologically sound society.

Ecuador’s diverse landscape – including the Amazon, beautiful beaches, mountain forests, the Galapagos Islands and spectacular volcanoes – as well as its diverse population and politics, make for a country that is never less than interesting. Now that conservative forces in Latin America are attempting to roll back the region’s so-called ‘pink tide’, their next target will probably be Ecuador and it will no doubt become even more interesting. 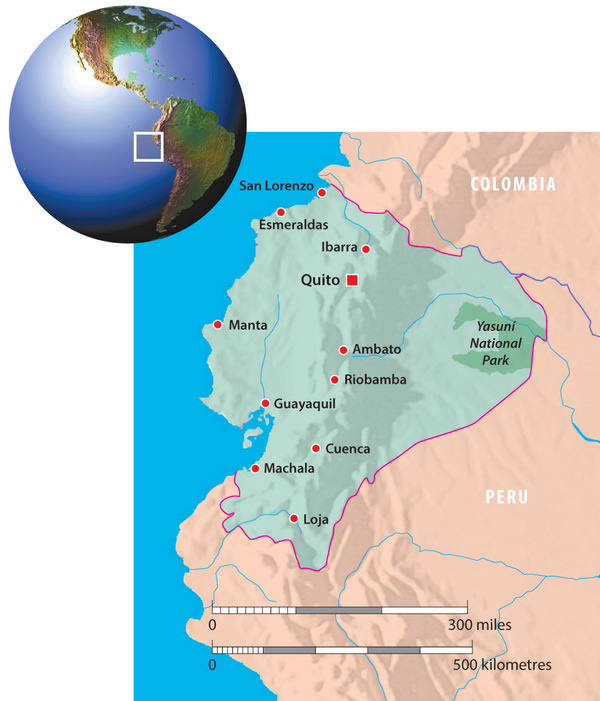 Leader
President Rafael Correa Delgado.
Economy
GNI per capita $6,090 (Peru $6,360, United States $55,230). Ecuador defaulted on its sovereign debt in 2008 and has subsequently terminated bilateral investment treaties, including one with the US. Correa has turned to China instead: in December 2013 he agreed a deal with Beijing covering $9.9 billion in advance oil sales and budget support. The country remains unhealthily dependent on oil, especially with international prices so low.
Main Exports
Petroleum, bananas, cut flowers, shrimps, cacao, coffee, wood, fish.
Monetary
US dollar (since 2000).
People
15.9 million. Annual growth rate 1.5%. People per square kilometre 64 (UK 267).
Health
Infant mortality 18 per 1,000 live births (Peru 13, US 6). Lifetime risk of maternal death 1 in 440 (US 1 in 1,800). HIV prevalence rate 0.3%.
Environment
Ecuador has more biodiversity per square kilometre than any other country in the world. It is also the only nation whose constitution recognizes that nature has a right to exist and flourish. In 2007 the Correa government presented the Yasuní- ITT initiative, for international funding to protect an important part of the Amazon from oil exploitation. The initiative failed, though, and oil exploration began in the Yasuní national park in 2016.
Language
Spanish is the official language, with Quechua the most widely spoken of the indigenous languages. Along with Shuar, Quechua is designated an ‘official language of intercultural relations’.
Religion
Catholic 74.0%, Evangelical Protestant 10.4%, Jehovah’s Witness 1.2%, other or atheist 14.4%.
Hdi
0.711, 98th of 188 countries (Peru 0.737, US 0.914).

Income Distribution
Inequality and poverty have declined significantly in the past 10 years. The country still has a long way to go, though.
2006
Freedom
Freedom of expression, assembly and association are completely guaranteed. However, defamation of government officials can still lead to charges, just as in many other countries around the world.
2006
Position Of Women
The status of women has been improving steadily since the 1990s. However, abortion remains illegal.
2006
Literacy
At 94.5%, literacy is generally high, but rates are still far lower among the indigenous population.
2006
Life Expectancy
76 years (Peru 75, US 79).
2006
Sexual Minorities
In 2016 Ecuador recently granted legal status to civil unions for samesex couples. Discrimination on the basis of sexual orientation is illegal. The LGBT movement is active and organizes annual Gay Pride marches throughout the country.
Politics
The election of Correa in 2006 represented an important turnaround for Ecuador. The country’s politics are far more stable, corruption and crime are far lower, state institutions more efficient, and political participation is vibrant in all sectors. He remains a key focus for regional Latin American opposition to neoliberalism – the Union of South American Nations has based its HQ in Quito. The President, though, can be verbally quite harsh towards his critics, whether from the left or the right.
2006