Turkey’s president exploits the recent attempted coup against him to crack down on opponents. Chris Brazier reports. 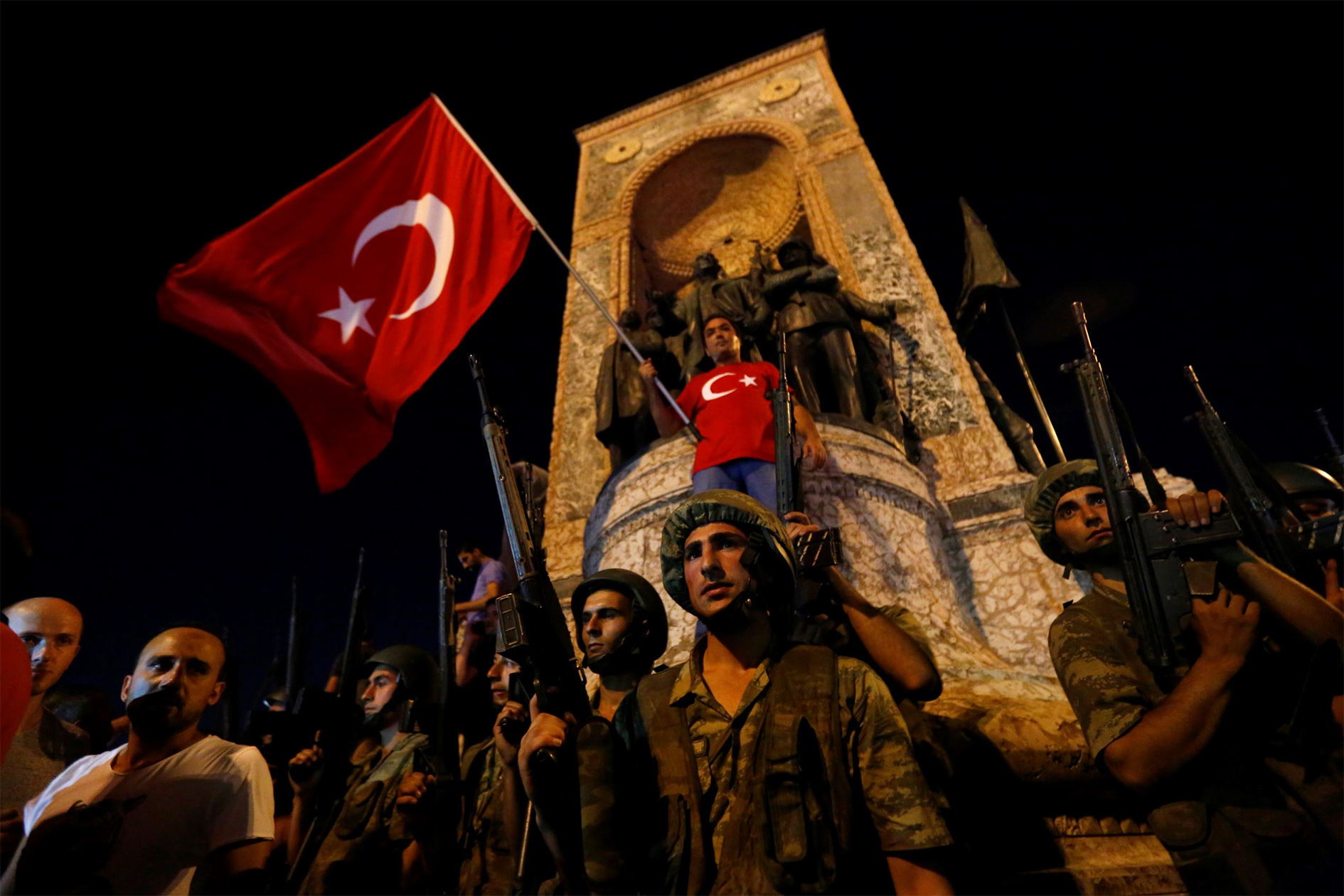 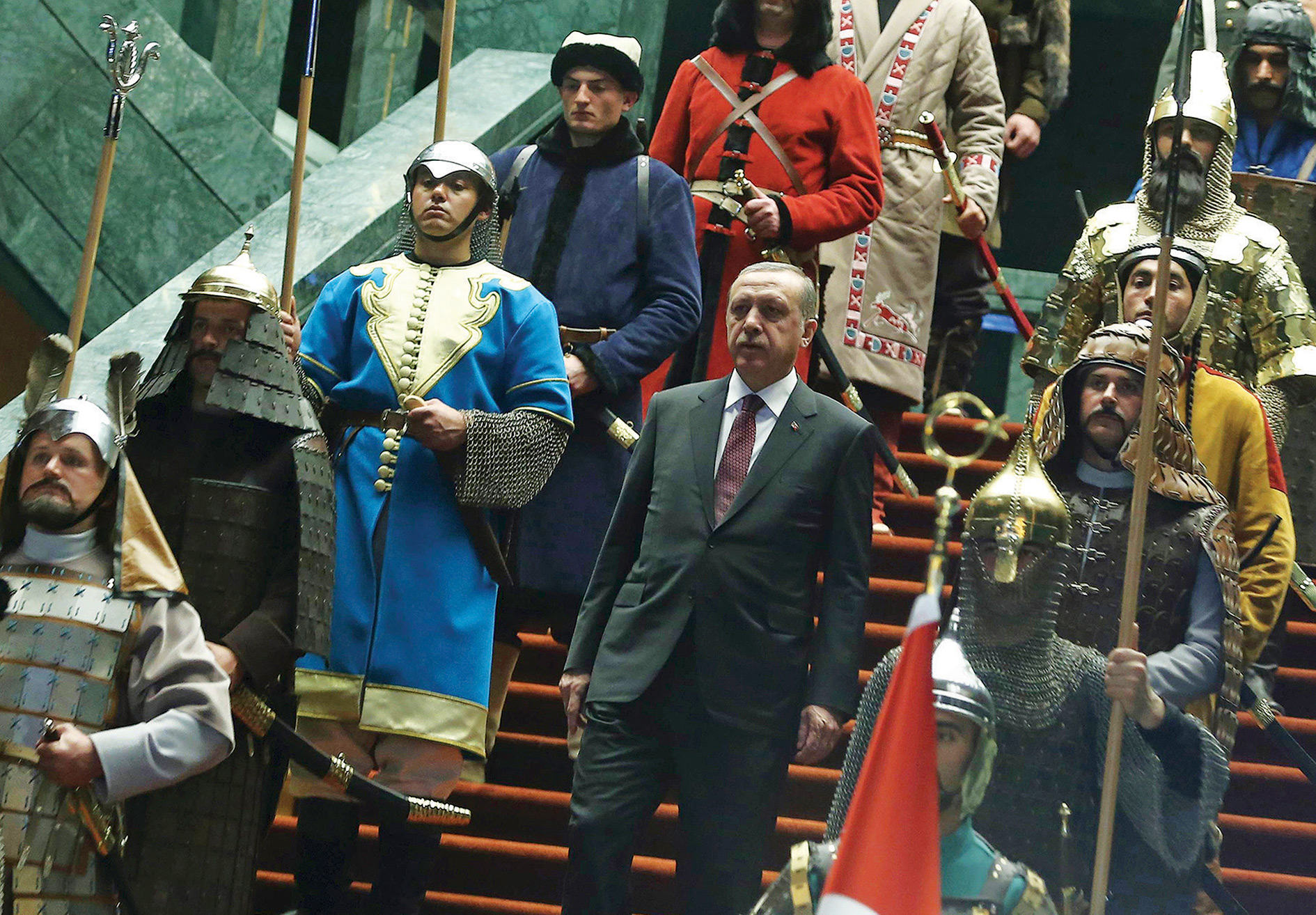 It is tumultuous time to be in Turkey, following the failed coup attempt on Friday night and amid the subsequent clampdown by the Erdoğan regime. There are Turkish flags absolutely everywhere – draped from the top floors of public buildings, flown out the windows of cars and on sale at almost every street corner. The nationalist ferment is almost palpable.

President Erdoğan’s first response to the attempted coup was to call the people out to defend ‘democracy’ against the rebel soldiers and he continues to ask them to show their support for his government by taking to the streets. And there is genuine, understandable pride that it was precisely this show of public resistance to the military coup that tipped the balance.

Yet, to be honest, most of the time here in Istanbul over the past couple of days there has often been more sign on the streets of foreign news crews hungry for action than of crowds actually delivering it – in Taksim Square, Istanbul’s main gathering place for protest, the banks of media crews with satellite dishes on their vehicles have often seemed more numerous than any demonstrators in favour of the government or otherwise. I was myself interviewed today by a Czech journalist wondering why I was out and about around the city rather than cowering in my hotel room as advised by the British Foreign Office. Taking advantage of the free public transportation granted by the government in celebration of the coup’s failure, I might have said. 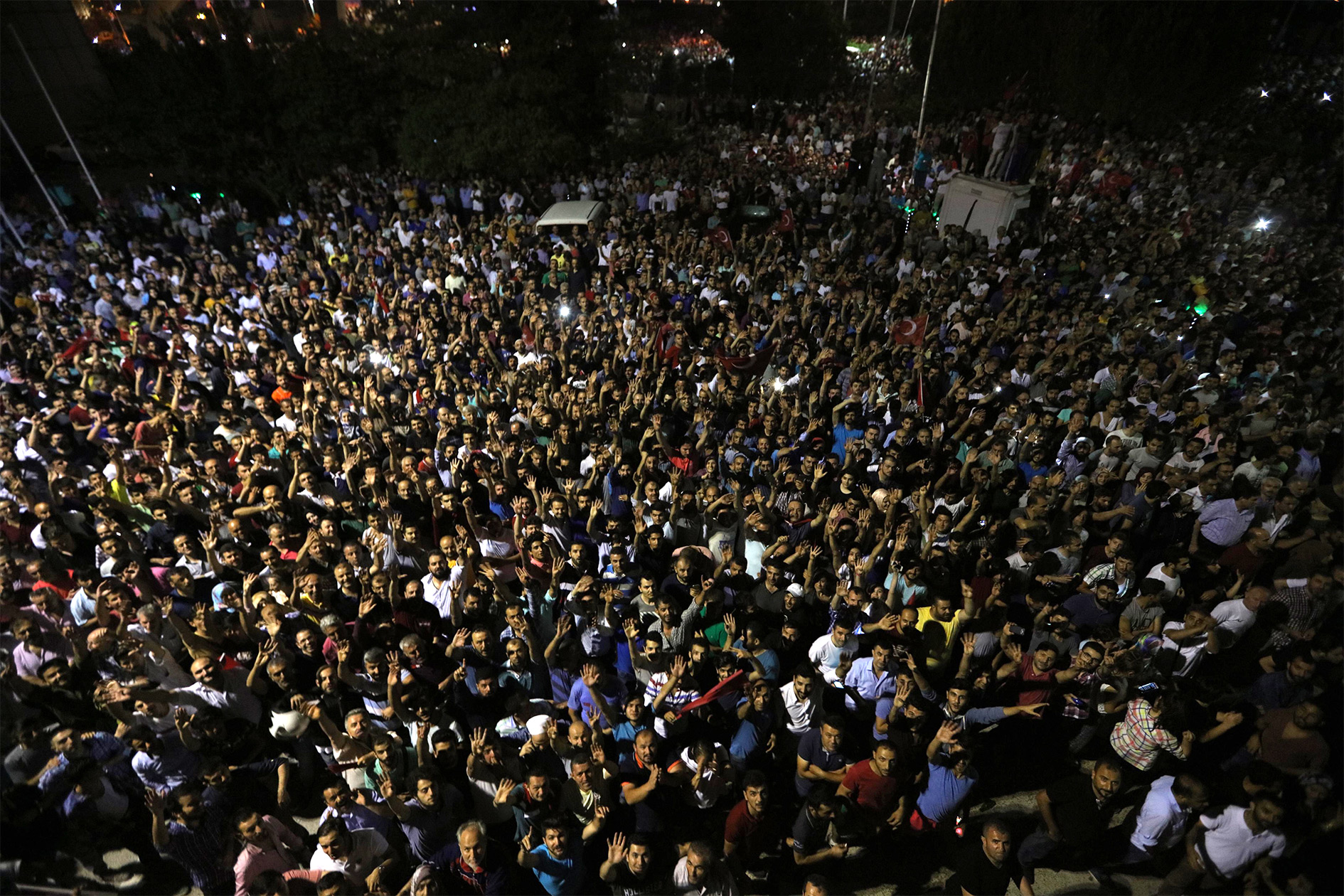 The atmosphere on the streets seems generally calm, good-humoured and positive. It suggests that people were keen to resume normal life as soon as possible, and that they had no appetite for a reversion to the bad old days of military coups and the repression associated with them. Last night there was more partying and more speechifying until well into the small hours and today public transport is again free.

The most obvious sign of political ferment is that every single TV screen seems locked on the face of Erdoğan: attending funerals, rabble-rousing, talking up people power. As one local observed while we watched one of those screens, whereas Erdoğan was previously struggling to achieve enough support for changing the constitution and increasing the powers of the presidency, it is likely that if he called an election now he would massively improve his majority and make such a constitutional change possible. 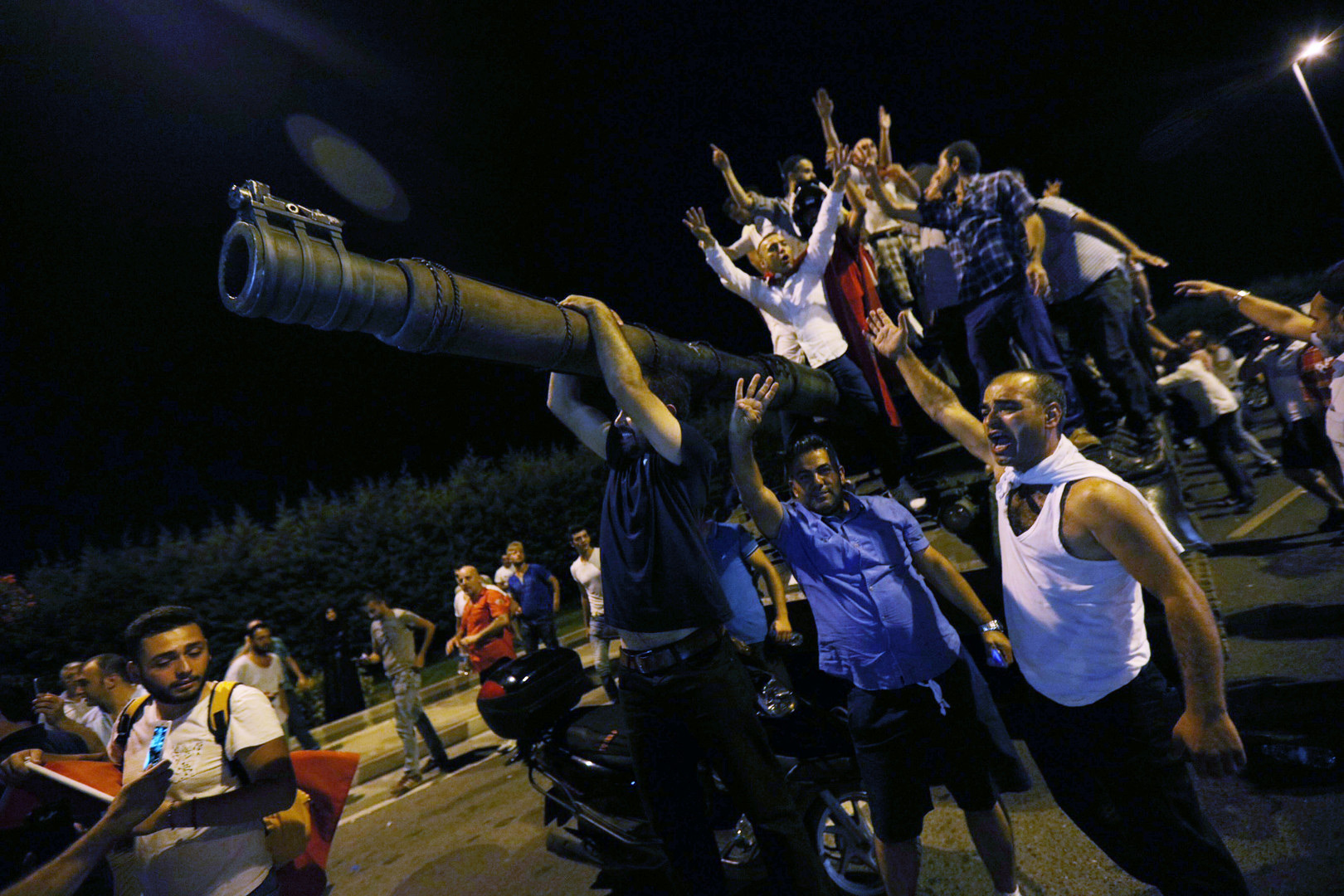 Although Erdoğan certainly had a worrying few hours on Friday night, he has certainly now turned the situation to his advantage with ruthless single-mindedness. Almost 9,000 police officers and 30 regional governors have been dismissed since Friday in addition to the 7,500 people detained, and 2,700 judges are on the target list for arrest. Is it really plausible that all these people were either actively involved or to be found on the lists of sympathizers that the government claims to have found? Or is it more likely that the Erdoğan regime is removing known thorns in its side at every level of society?

As it stands, 20 news websites that are critical of the government have already been shut down. Was this the kind of democracy that ordinary Turkish people were defending on Friday night and have been celebrating since? Or is it a foretaste of a new authoritarian era? 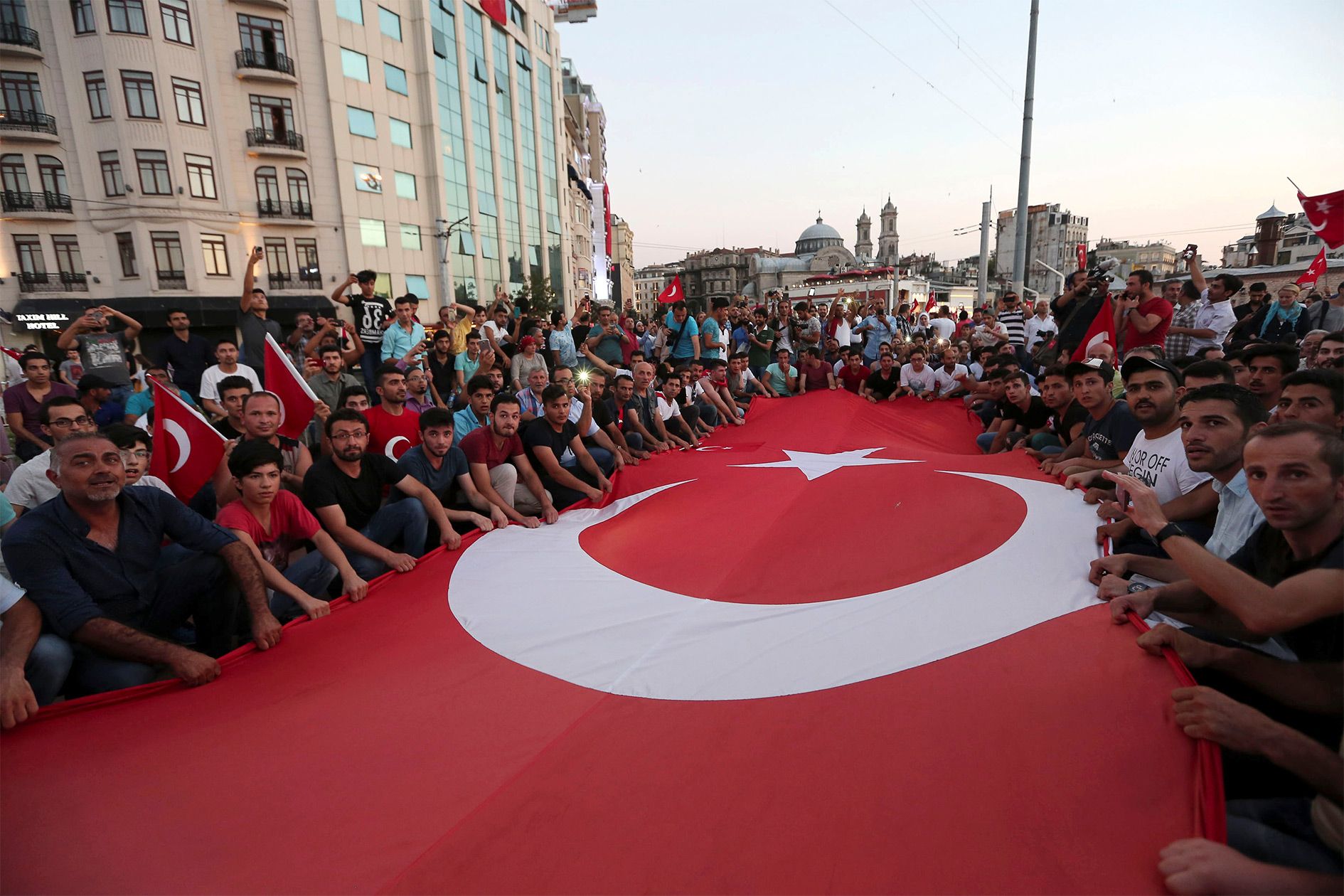 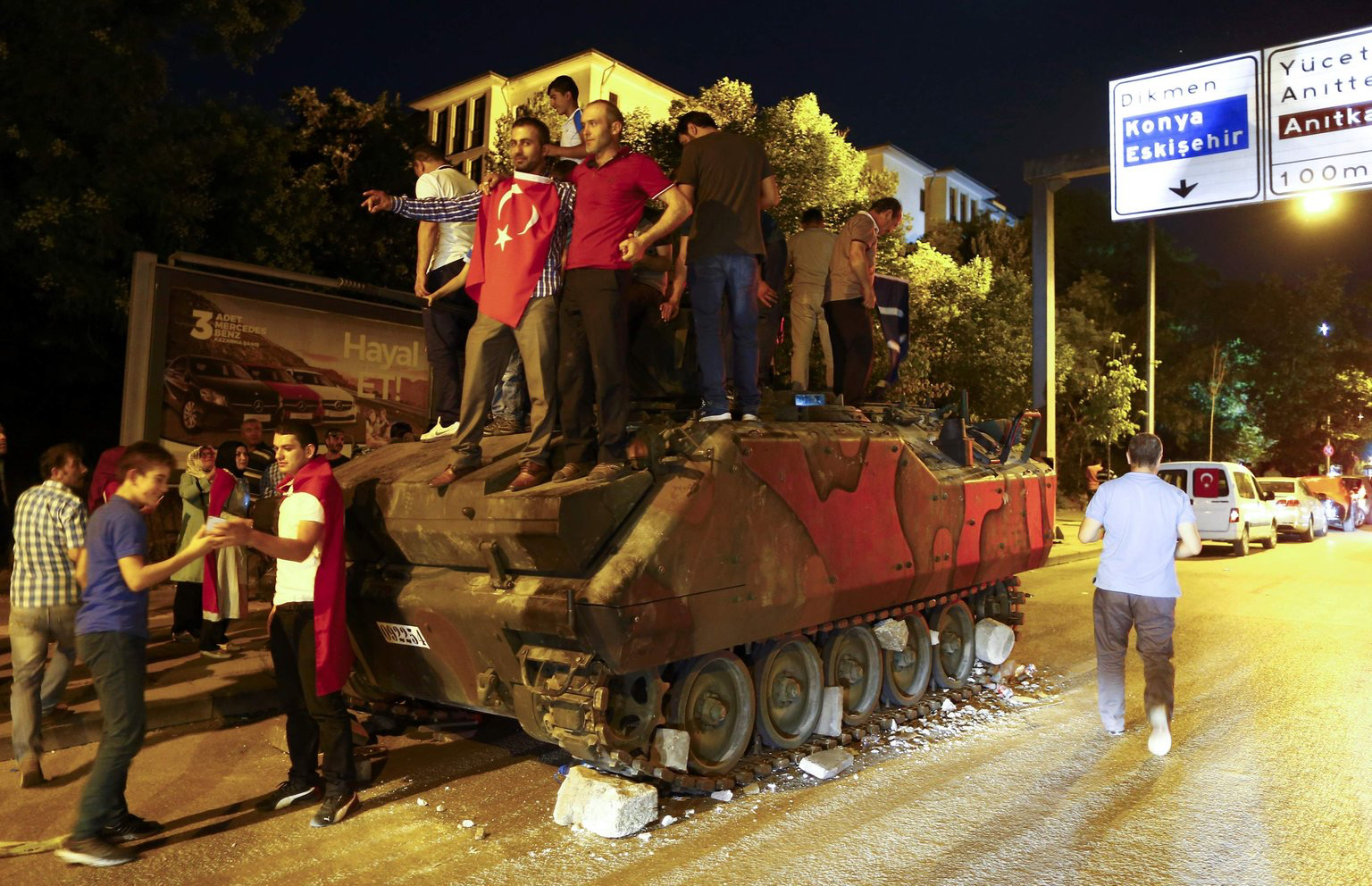 Supporters of Turkish President Tayyip Erdoğan stand on an abandoned tank during a demonstration outside parliament building in Ankara, Turkey, 16 July 2016.
REUTERS/Osman Orsal 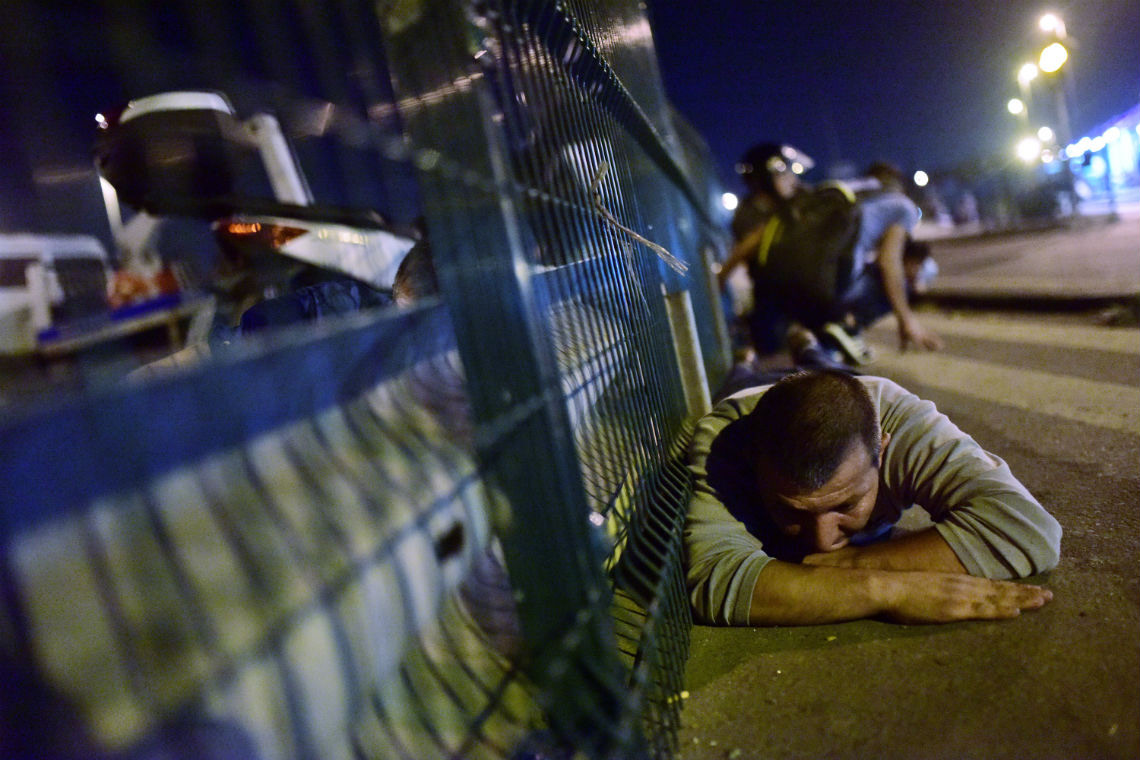 People take cover near a bridge during an attempted coup in Istanbul, Turkey.
REUTERS/Yagiz Karahan 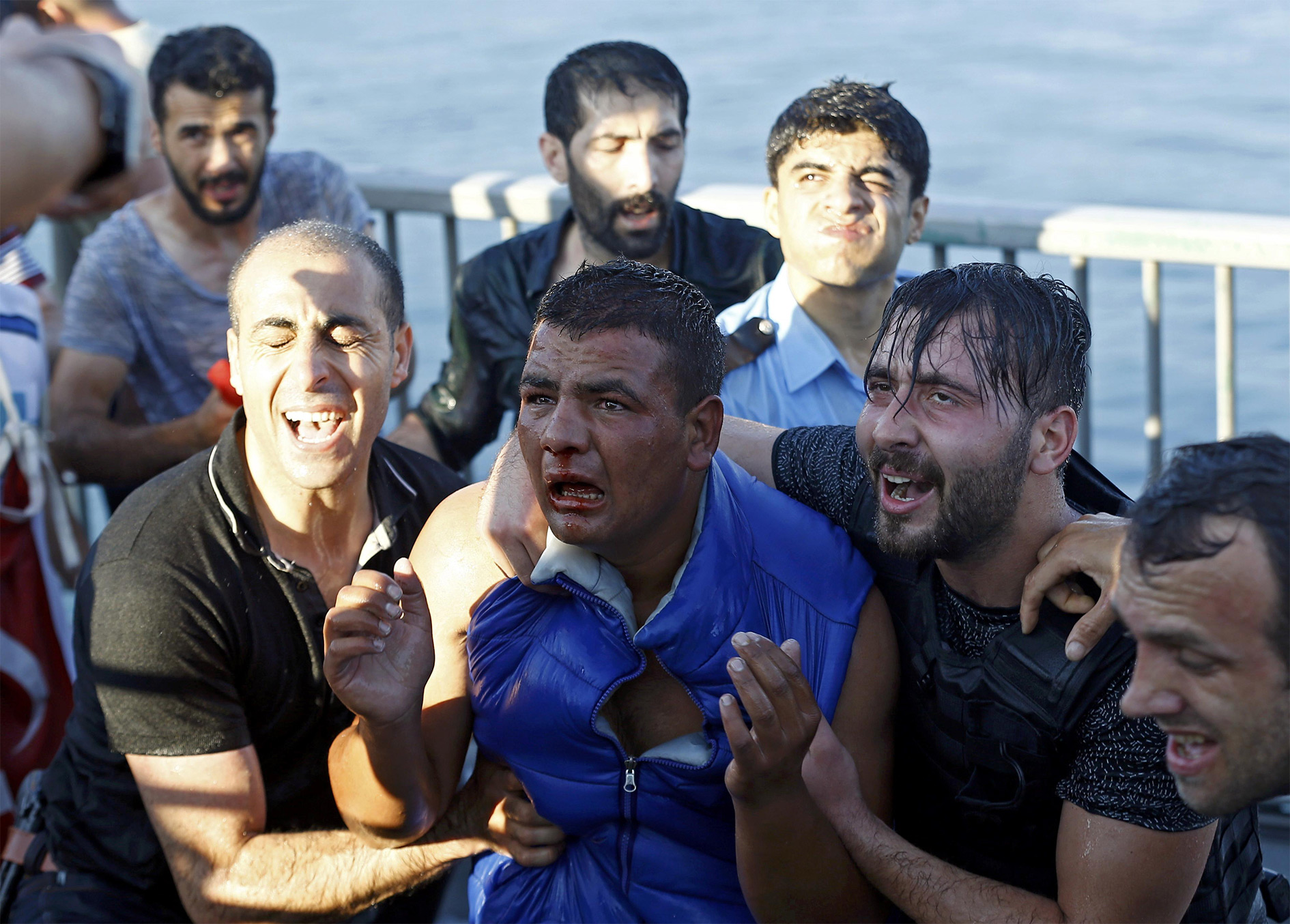 A soldier beaten by the mob (C) is protected by plain clothes policemen after troops involved in the coup surrendered on the Bosphorus Bridge in Istanbul, Turkey 16 July 2016.
REUTERS/Murad Sezer

Chilcot report: looking back on why we went to war with Iraq
The Nauru Files: It’s time to close Australia’s abusive detention regime