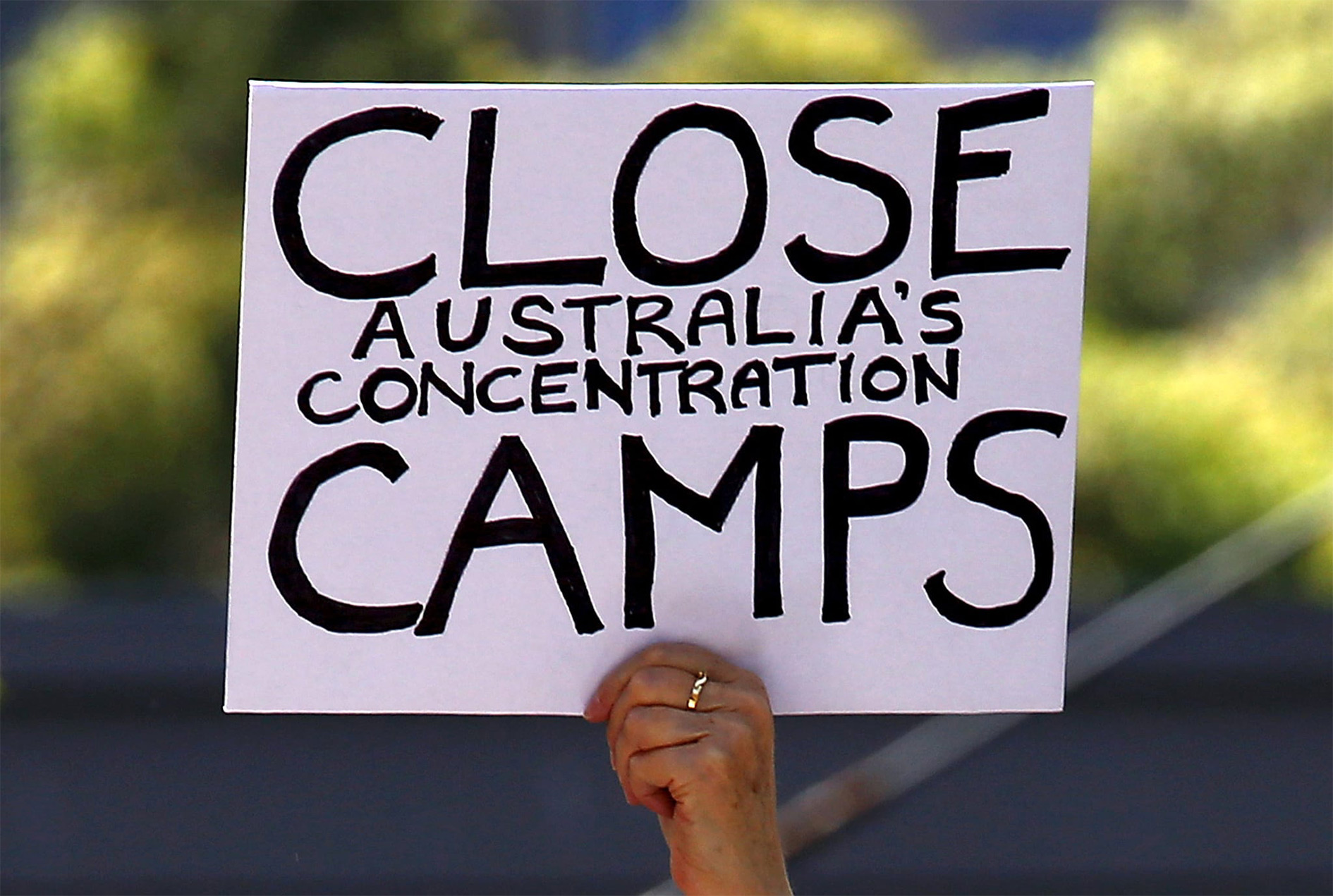 A protester holds a placard during a rally in support of refugees in central Sydney, Australia, 19 October 2015.
Photo: © REUTERS/David Gray/File photo

More than 2,000 leaked incident reports from Australia’s detention centre regime for asylum seekers on the Pacific island of Nauru have revealed the extent of harm suffered by men, women and, overwhelmingly, children.

The reports compiled by staff working in the detention centres are horrific accounts of assaults, sexual assaults and self-harm that are commonplace in the detention centres run and financed by Australia. Reports include people ingesting chemicals, swallowing rocks, and one even describes a man trying to eat a sandwich full of screws. Often the abuse is at the hands of Australian and Nauruan workers within the centre with young women being the target of unwanted sexual attention and violence.

More than half of the reports involve children, even though children made up only about 18 per cent of those in detention on Nauru during the time covered by the reports, May 2013 to October 2015. One report alleges a guard put his hands in the pants of a child. Another alleges a girl under the age of 10 took her clothes off and asked adults to insert their fingers into her vagina. 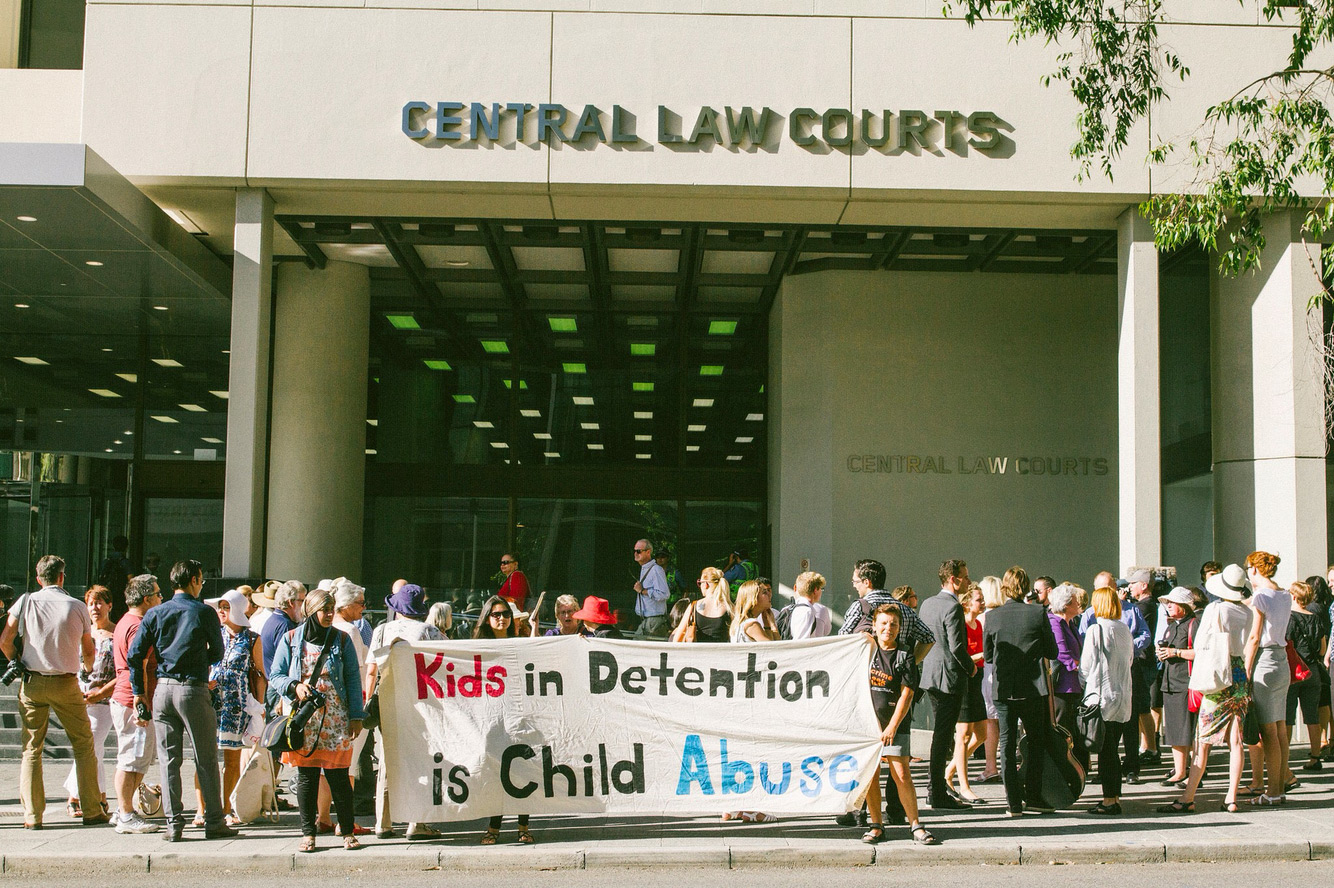 Christian leaders faced court in Perth, 28 January 2015, following a peaceful sit-in at the office of the Foreign Minister. They called for the release of 135 children then locked-up on Nauru and an end to detention.
Photo: Louise Coghill

The Australian Department of Immigration and Border Protection has stated that the reports are evidence of a robust reporting system, but to anyone who has worked in Nauru, like me, it is known that little will be done to assist these people or to follow up these claims. Complaints go up the chain of the command until they reach Australia’s department of immigration where they are rarely resolved to the advantage of the asylum seeker. There is no independent authority in Nauru to take matters further.

People wanting to denounce practises in the centre have been threatened into silence. The Australian Border Force Act, which took effect on 1 July 2015, makes it a crime punishable by two years’ imprisonment for people working in the centres to discuss operational matters publicly. This includes social workers, guards, health professionals, educators; anyone contracted by the Australian Government to perform services on behalf of the Department. I worked in Nauru from September 2012 to June 2013. In that time, I documented the willful abuse of people detained in the camps in my book, The Undesirables: Inside Nauru. The purpose of these camps is to treat people so awfully they will not come to Australia to seek protection and in order to do this you must destroy their dream of reaching freedom and safety. I witnessed the destructive physical and mental conditions of detention, the demise of the human spirit, the intentional crushing of hope.

In the last few years, there have been countless official reports that have exposed abuses and recommended the closure of centres on Nauru and Manus Island. November 2014, the Australian Human Rights Commission’s National Inquiry into Children in Immigration Detention uncovered numerous reported incidents of assaults, sexual assaults and self-harm involving children; March 2015, an independent review by Philip Moss uncovered allegations of sexual abuse by staff in the detention centre in Nauru; August 2015, the Senate Select Committee’s final report into conditions at Nauru recommended the immediate release into the Australian community of all children and their families detained in Nauru and in onshore detention facilities; June 2016, an independent report titled ‘Protection Denied, Abuse Condoned: Women at Risk on Nauru’ reported that ‘women were being routinely abused, raped and doomed to spend the rest of their lives on a tiny island nation, often alongside the perpetrators’; July 2016, Amnesty International and Human Rights Watch researchers found that the Australian Government has ‘designed a system of deliberate abuse’, in Nauru to deter people seeking safety who arrive by boat. All of these reports were ignored by our politicians with the arrogance of history’s most callous rulers. 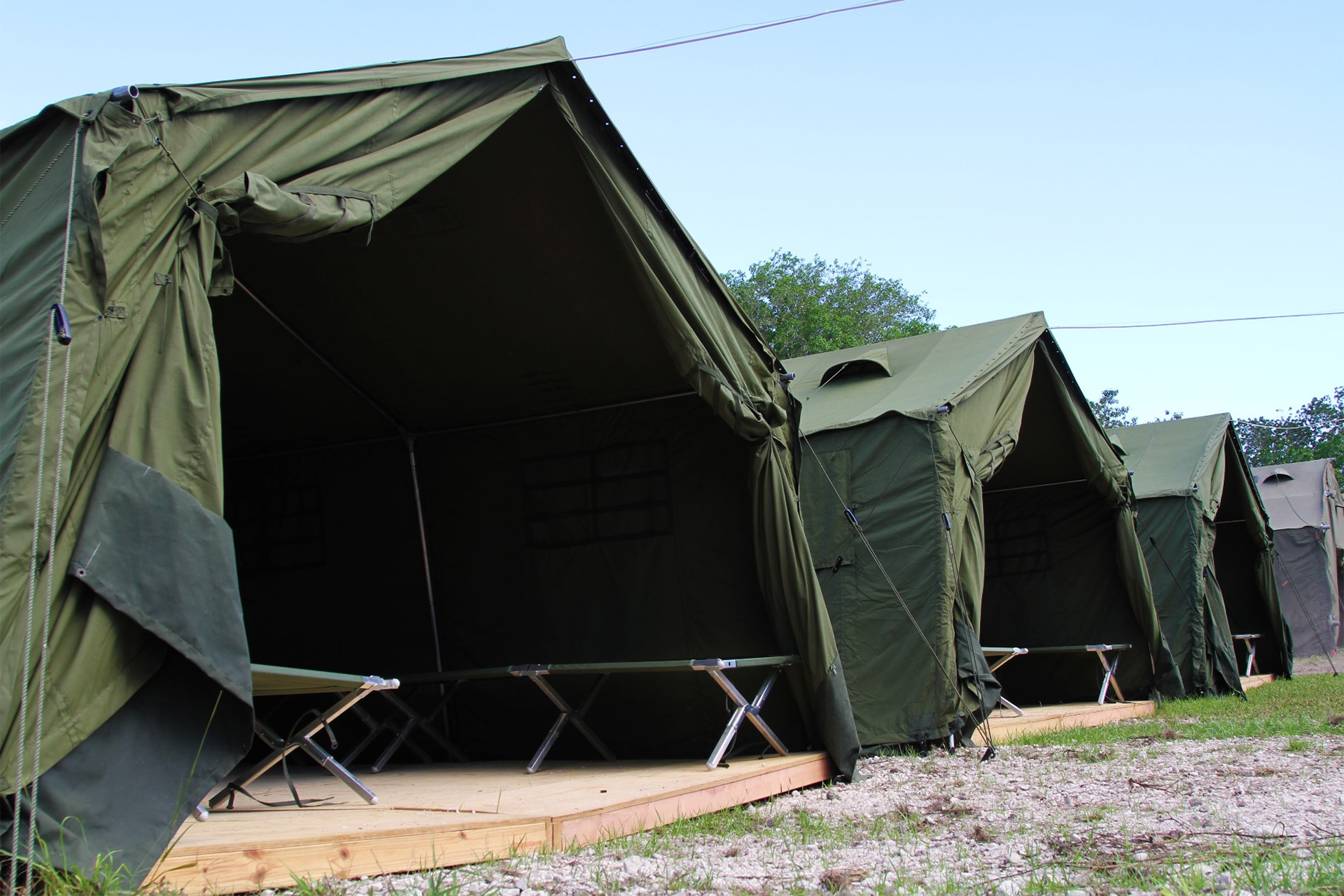 The Nauru Files have been no different. When faced with the overwhelming evidence of systemic abuse, Prime Minister Malcolm Turnbull shifted responsibility to the Nauruan government and police force; Immigration Minister Peter Dutton called it ‘hype’, accusing the victims (including a man who died after setting fire to himself) of falsifying claims in order to get Australia; and former Immigration Minister Scott Morrison referred to them as allegations rather than facts and talked of invented complaints. This is an all too familiar approach of shifting responsibility, doubting claims, and blaming victims. Yet these desperate people have no other way of being heard and the number of reports is almost certainly an under-estimate of the number of real cases, because many victims will be too young or too scared to complain.

In contrast, when faced with graphic videos of abuse of indigenous children in Northern Territory detention centres weeks earlier, Turnbull immediately called for a Royal Commission. Refugee and asylum seeker children must sit too low on Turnbull’s political vote pyramid to be cared about. Even lower than the all too frequently ignored plight of indigenous children. For those imprisoned on the island of Nauru, having committed only the ‘crime’ of asking our country for protection, there is no reprieve from the abuse. There is little hope that the government will improve conditions in Nauru because these people are not worth the time or the effort to save. Turnbull, Dutton, and Morrison are intent on doing whatever they must, ‘by hook or by crook’ to ‘stop the boats’ (to quote former Prime Minister Tony Abbott).

The offshore detention regime is part of a deterrence policy which the Australian government calls a ‘humanitarian’ attempt to save lives at sea. Since 2000, there have been 1,976 recorded deaths of people trying to come to Australia by boat from Indonesia (or less commonly from Sri Lanka). However, at the same time as championing a ‘humanitarian’ policy, Australian politicians have demonised asylum seekers, labelling them as ‘queue-jumpers’, ‘illegals’ and ‘criminals’. Many see this bipolar public attitude towards people seeking asylum as a way of establishing the ‘necessary’ cruelty of deterrence. Despite the threat of offshore detention, boats have continued to arrive in Australian territorial waters. The most recent boat arrival, this time from Sri Lanka, made it to the nearby Cocos (Keeling) Islands in May 2016. Indeed, the only effective way to stop boats arriving in Australian waters has been to physically stop them and return them to their point of disembarkation, ‘when it is safe to do so’. A refusal policy rather than a deterrence policy. However, this policy has also been criticised for breaking a number of international laws. Detention as a deterrence has failed and yet the Australian government has persisted with the camps in Nauru and Manus Island. 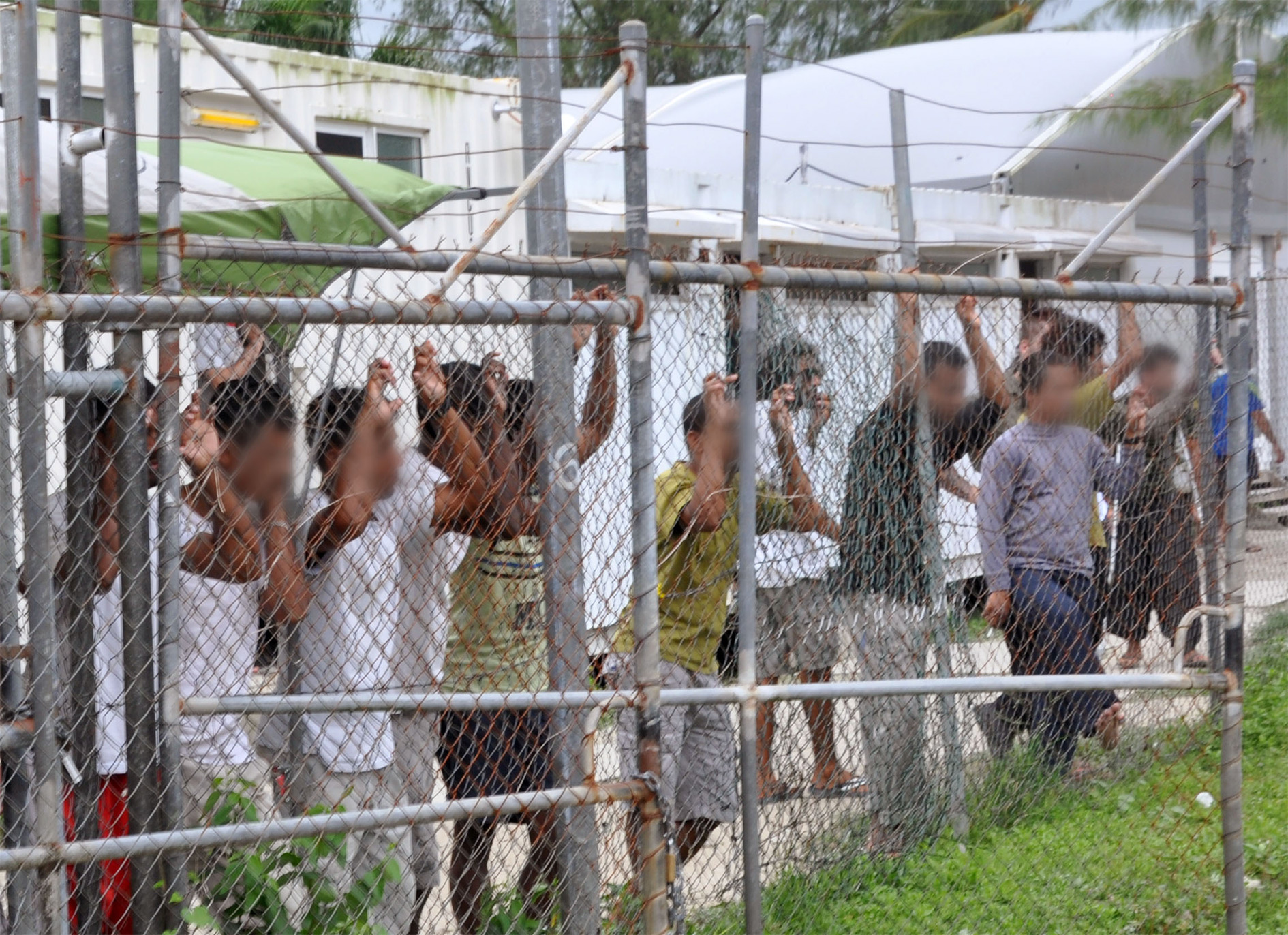 Asylum seekers look at the media from behind a fence at the Manus Island detention centre, Papua New Guinea in this picture taken 21 March 2014. This is image is supplied from source with faces digitally blurred.
Photo: AAP/Eoin Blackwell/via REUTERS

As of 30 June 2016, 442 men, women and children are detained in the rudimentary detention camp where they are forced to live in tents. Since 2012, the Nauruan government established a refugee processing system and began to assess refugee protection claims; however, refugees are limited to settlement places in Nauru or Cambodia. The concept of being given protection in either of these countries would be laughable if it wasn’t so frightening. There are currently 921 refugees living in Nauru, which is close to 1 per cent of the population of Nauru.

Many Australians have been left wondering what can be done to affect change. The United Nations’ special rapporteur on torture was scorned by Tony Abbott when he raised concerns that Australia’s detention system was breaching the ‘Convention Against Torture and Other Cruel, Inhuman or Degrading Treatment or Punishment’. Then Prime Minister Tony Abbott stated that Australians are, ‘sick of being lectured to by the United Nations’, showing a complete disregard for international law and expectations. When the President of the Australian Human Rights Commission, Gillian Triggs, released her National Inquiry into Children in Detention, Abbott called the report a ‘political stitch-up’, accused Triggs of partisanship and actively sought her resignation.

Australia’s two-party system offers little in the way of hope. Offshore detention and deterrence is a bipartisan approach. Neither party offers asylum seekers or Australian voters an alternative to abuse. Both have been guilty of running the Nauru detention centre, both have been guilty of using demonising and misleading language to justify their actions and drum up suspicion towards ‘undocumented’ arrivals. Considering this toxic environment, is it any surprise that the 2016 Australian election saw the sorry resurgence of Pauline Hanson and the One Nation party to the Senate based on a racist campaign against muslims? Right-wing groups in Europe and America are beginning to see Australia as a shining example of how to cope with growing numbers of refugees. Xenophobia, isolationism, extreme nationalism, the closing of hearts and borders, are threats to the universal rights and freedoms established by the international community just over 60 years ago. They are threats that we all must counter. 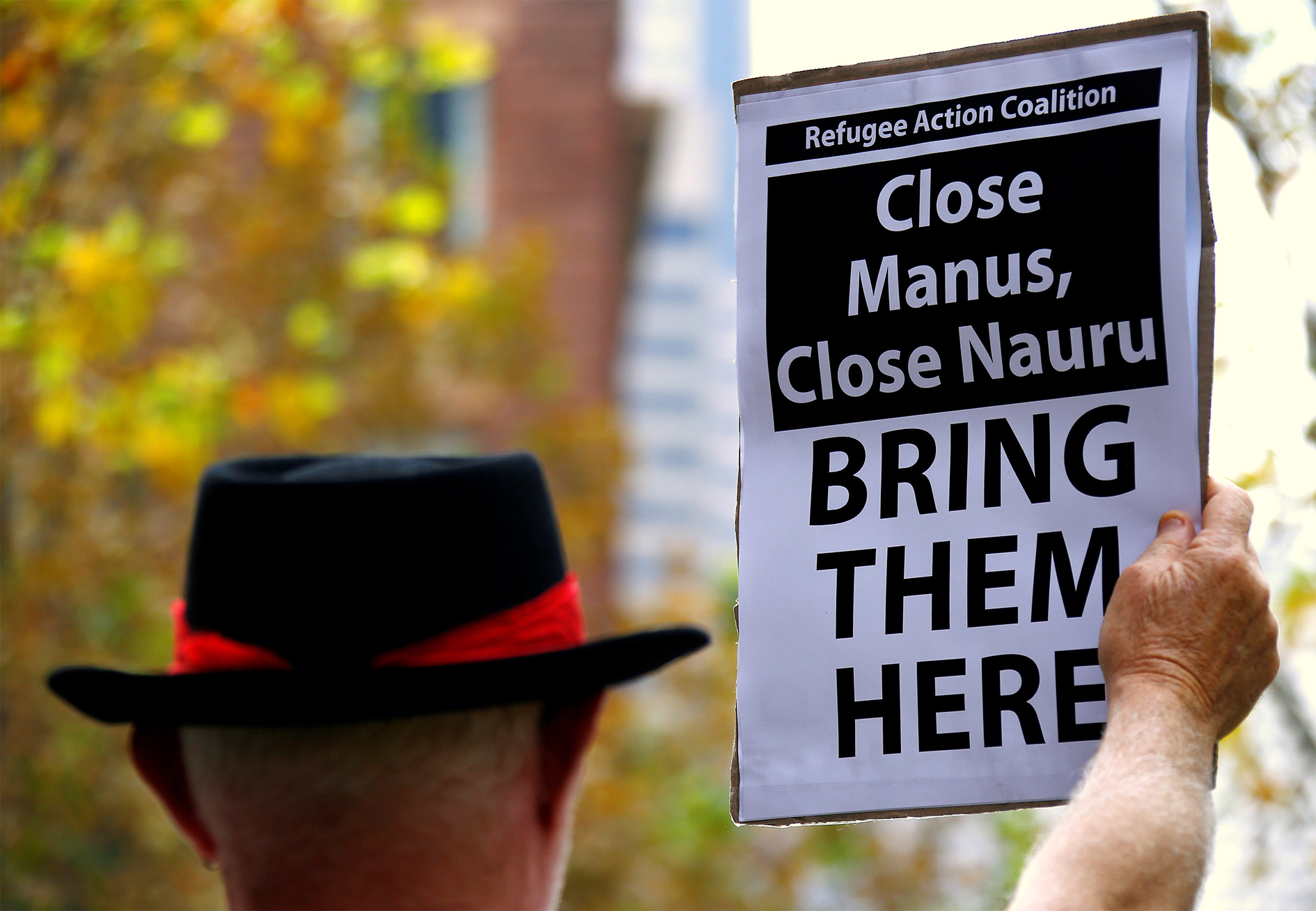 A protester from the Refugee Action Coalition holds a placard during a demonstration outside the offices of the Australian Government Department of Immigration and Border Protection in Sydney, Australia, 29 April 29 2016.
Photo: REUTERS/David Gray/File Photo

With that in mind, I call upon our allies, our friends across the globe, our regional neighbours; I call upon President Obama, Prime Minister Trudeau, Chancellor Merkel, Prime Minister Key and the New Zealand parliament, whoever it takes: tell our politicians to stop. Force them to stop. When South Africa persisted through apartheid the world imposed economic sanctions upon them. Should we not be subjected to the same international restrictions? We are in the midst of a human rights tragedy but our politicians can only see the suffering of children through the prism of ‘border protection’ and election cycles.

No other country in the world mandates the closed and indefinite detention of children seeking asylum, let alone condones their sexual assault. I cannot imagine many people in the world can read the Nauru Files and its reports of sexual assaults on children and turn the blame back onto the victims, yet this happened in Australia. It is time the international community demanded an end to the systemic abuse of children, championed and encouraged by our politicians.

Mark Isaacs is a writer, a community worker, an adventurer, a campaigner for social justice, and author of The Undesirables: Inside Nauru (Hardie Grant, 2014), an account of his work with asylum seekers. Mark continues to work for an asylum seeker settlement service in Sydney and he writes as a freelancer. His work has appeared in Foreign Policy, World Policy Journal, Huffington Post, New Matilda, VICE, Conscious Magazine, Roads and Kingdoms and many others. He can be found on Twitter and Facebook.

Turkey in turmoil
Canada: silence of the sands