How Turkey is winning hearts and minds

In 2011, Western donors sat back while 250,000 Somalis died of starvation. Then Turkey stepped in. Jamal Osman reports on the rise of aid from the Muslim world. 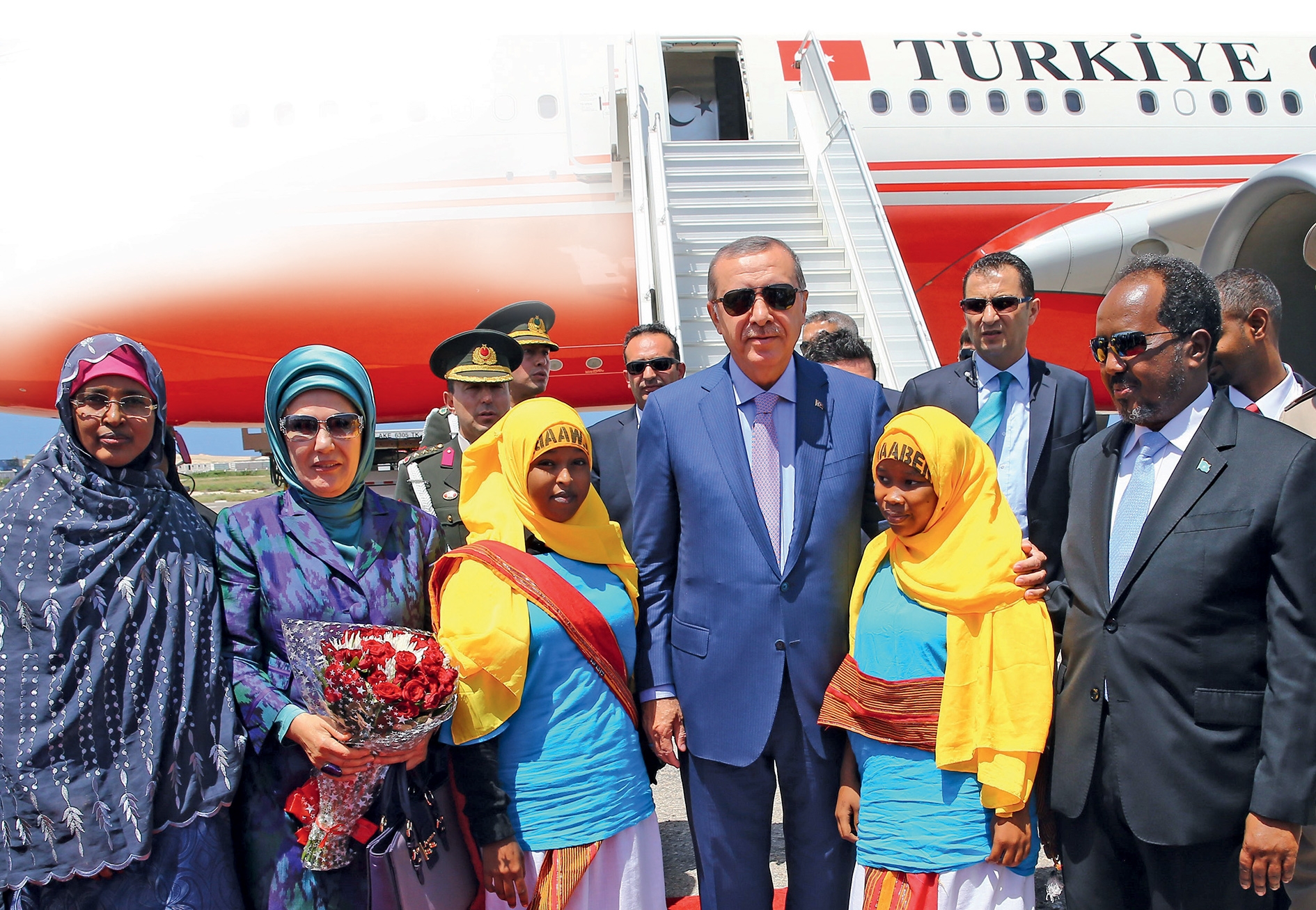 Abdifatah Mahad stands tall in the middle of his farm on the outskirts of Baidoa, Somalia. He boasts about how well he’s doing and the variety of his produce: maize, beans and vegetables such as peppers and onions.

Farmers here used to stare at the sky and wait for a drop of rain. Now they look under their feet – to where they have dug wells. They are ambitious; the reliable water source means farming is possible all year round and they hope to supply nearby towns. ‘We want to meet the demands of the local people,’ says Abdifatah.

‘They call it humanitarian aid but we call it dead aid; meaning it’s intended to kill’

Six years earlier, this region was the epicentre of a famine that claimed the lives of 250,000 Somalis. Four million people were in danger of starvation, according to the UN. Successive natural disasters, and an apparent lack of compassion from rich nations, have taught Somalis a hard lesson: to strive for self-reliance.

‘They call it humanitarian aid but we call it dead aid; meaning it’s intended to kill,’ says Abdifatah. ‘They brag about helping us and take credit for things that are not even beneficial.’

His claim is not baseless. With regular US drone strikes terrorizing communities in this area, it’s also hard for Somalis to believe the same hand is giving out humanitarian aid.

Western nations make appealing promises but help does not always materialize. The famine of 2011, which I covered for British TV network Channel 4 News, is a prime example.

We had finally arrived in Baidoa, south­western Somalia in August, after more than a week travelling through famine-affected areas controlled by the al-Qaeda linked group al-Shabaab.

We headed to the main hospital, which was full of malnourished children. I met three very young patients Khadija, Mohamed and Safiya, who were suffering from acute malnutrition and dehydration. Their bones had decayed; they were too weak to cry. All they had for comfort was the heat of their mothers or siblings who had been left to care for them.

Families had walked miles from villages to get here. Desperate parents were competing for the attention of a goatee-bearded man with a white jacket, Dr Abdalla Bulle, who was struggling to cope with the influx. He told me that many children were dying soon after arrival, with five or six being buried every day.

Seven years later, I spoke again with families who had lost loved ones to the 2011 famine. They still struggle to understand why they were abandoned to their fate. ‘How is it that the world’s richest nations with so much wealth to spare couldn’t save our children?’ one woman asked. ‘What did we do to be disowned by fellow human beings?’ asked another.

Why didn’t the pictures of starving Somalis convince politicians in the US and Europe to act? After all, aid workers on the ground had been raising the alarm for more than a year. The answer is that, led by the US, Western nations (with the exception of Nordic countries), stood back, withheld aid and watched Somalis – among them some 125,000 children – die.

The publicized narrative was that donors feared some of the food aid could fall into the hands of al-Shabaab – a proscribed terrorist group. For NGOs, this meant they were at risk of prosecution under the US Patriot Act.

But some humanitarian workers suspected a different motive. They told me the Western military planned to use starving Somalis as a cheap way to defeat the militants – by eroding their support and, eventually, provoking a local revolt.

While men and women in suits pondered over the outcome of their decision, and al-Shabaab blocked relief, aid workers on the ground were pleading for help. ‘We really need, sometimes, to put politics aside,’ said Hassan Ismael who I met in Baidoa distributing food aid from Islamic Relief, the only UK-registered organization operating in areas controlled by al-Shabaab at that time. ‘This is a humanitarian emergency. We need to save lives.’

His appeal was falling on deaf ears. By the time the declaration of famine spurred the West into action, shaming the US into lifting restrictions, it was too late. Many more people would have perished had it not been for the speedy mobilization of Somalis in the diaspora, and charities from the Muslim world.

Some humanitarian workers suspected a different motive. They told me the Western military planned to use starving Somalis as a cheap way to defeat the militants – by eroding their support and, eventually, provoking a local revolt

It was a lesson and a game changer for the humanitarian industry in Somalia. ‘New’ foreign actors came in – notably Turkey.

At the height of the famine in August 2011, Turkey’s leader Recep Erdoğan and his family arrived at the head of a huge delegation consisting of senior cabinet ministers, business leaders, NGOs, media and celebrities.

Erdoğan brought a sense of brotherhood and hope. Since 2011, Turkey has sent almost $1 billion in aid to Somalia. After the emergency was over, Turkish companies launched into major infrastructure projects, building roads, hospitals and the port. Turkish Airlines is the only international carrier that flies to Mogadishu. Turkey has cemented its place in the hearts of the Somali people, who watch its soap operas and buy its products.

Evidence suggests that Western nations sent more money than Turkey. For instance, the UK alone spent $148 million in Somalia in 2017-18. But while Somali elites may talk about money spent by the West on promoting democracy and security, ordinary Somalis are unlikely to be able to name one thing. Asked about Turkey, they would give a long list. Simply, ordinary citizens feel the Turkish presence in the country is improving their lives.

The US and European nations no longer have a monopoly on the humanitarian industry in Somalia. Arab charities have always been in Somalia doing things quietly, but the renewed, up-scaled commitment from the Muslim world in 2011 did much to break the mould.

The differences between the two are stark, according to Khalif Abdirahman, an independent researcher on humanitarian aid.

Muslim organizations, he says, operate on trust. They are based in-country. They focus on development and switch to emergency when necessary. They buy food-aid locally. They are pragmatic, quick to respond. They deal with people directly. And with much money flowing in direct from the faithful – obligatory charitable giving is one of the five pillars of Islam – they don’t waste time and resources on paperwork.

In contrast, he says, Western NGOs focus on ticking boxes. They operate out of Nairobi. They compete for funding for specific projects, which is not necessarily what people need. They usually import food. They do less on development. They are slow to respond to emergency situations. They concentrate most on proposal writing to capture more market share.

I returned to Baidoa in 2017 to cover another drought. This time the aid community was better prepared – and so were the people themselves. In the past, Somalis would often say to me: ‘We ask donors to help us’. Today, I rarely hear that.

Somalia has a long way to go to feed its citizens. After all, the nation is still embroiled in a 30-year-long war. But attitudes are changing; people like Abdifatah have a stronger determination not to depend on foreign aid and ‘Muslim brothers’ are playing a critical role in improving people’s lives.

Jamal Osman is a Somali journalist and filmmaker based in London.

Humanitarian Action - The Facts
How can famines be ended?