How can famines be ended?

Mass starvation is making a comeback as a weapon of war. To tackle this great evil we must stop talking about food and over-population, and engage with the politics, argues Alex de Waal. 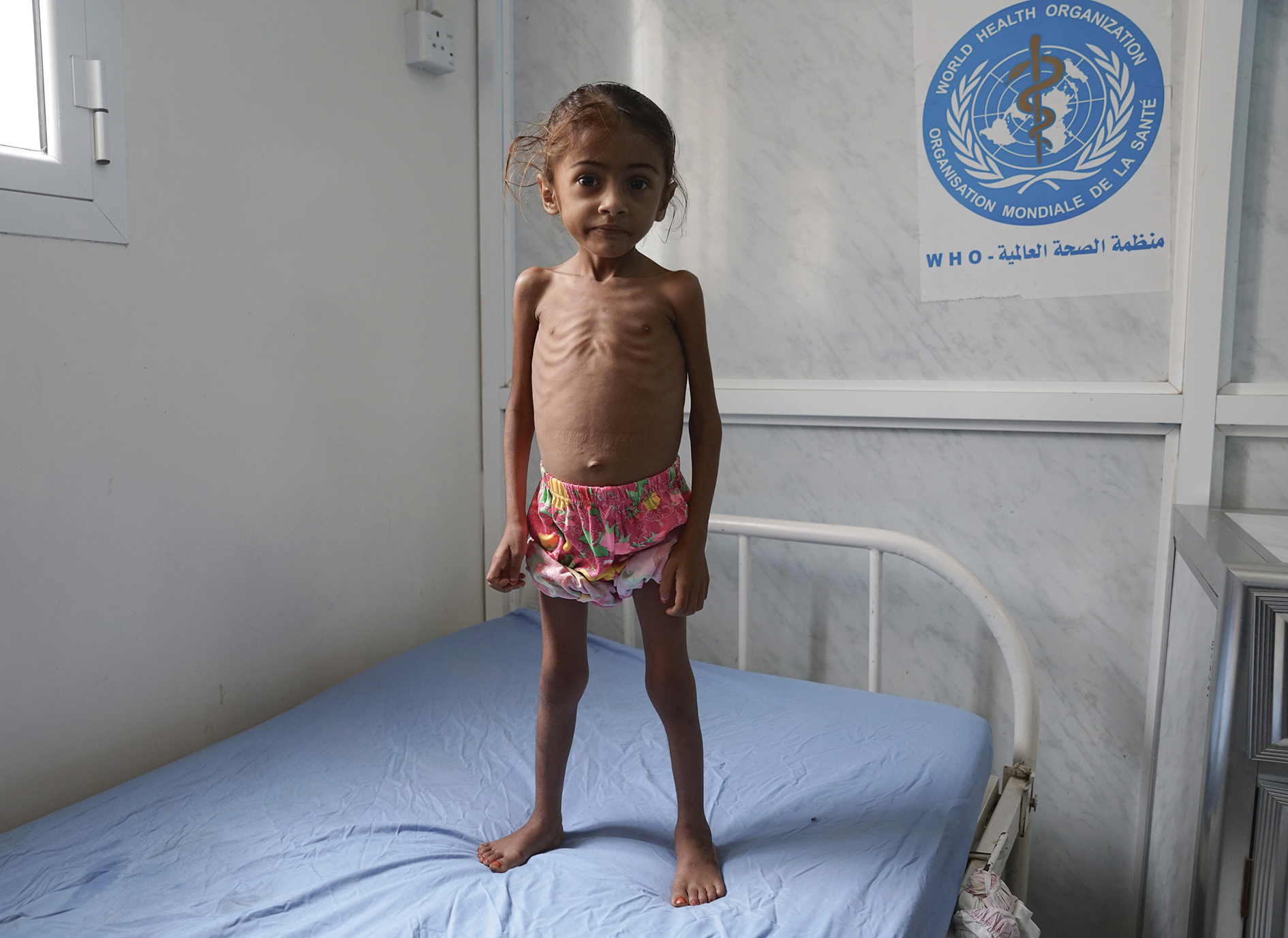 Three-year-old Kholod is admitted to hospital in Hudaida, Yemen suffering from severe acute malnutrition.* One of five children, her father is a teacher but he has not been paid for a year. Extreme hunger and disease are killing around 130 children every day in Yemen, according to Save the Children. [*We would not normally use a picture like this one in New Internationalist, but we felt that at a time when humanitarianism is under attack, it was important to show what is at stake, especially in an article that makes clear that famine is not just bad luck, it's political – ed.]
Photo: Giles Clarke, UN OCHA / Getty Images

What would it take to end starvation? A few years ago, this question was moot as famines appeared to have disappeared – or at least to have been confined to Stalinist anachronisms such as North Korea. But with the disturbing resurgence of famine in 2017, the issue becomes salient once more.

Famine is a political phenomenon; starvation happens when some (powerful) people inflict it on other (less powerful) people. It’s manmade – and the gendered word is deliberate. It’s also a complex, compound evil – each famine is a vortex where different factors converge and combine.

The most commonly proposed formulae for ending famine are destined to fail because they don’t put the politics first. Let me outline four false solutions: namely, green revolution technology; population control; more aid; and early warning systems. In each case there’s a valid point to be made – but also a simplistic myth and a possibly dangerous agenda.

Starvation happens when powerful people inflict it on other, less powerful, people

I will then raise an alternative and controversial suggestion – that the road to eliminating mass starvation is to prosecute the people who perpetrate it. This has possibilities and perils. Last, I will propose that ending famine demands the kind of broad-based public campaign that has challenged other great common evils of our time.

A Green Revolution for Africa

Try a Google Images search using the terms ‘famine’ and ‘starvation’ and you will quickly find a powerful reinforcement for the idea that famine is synonymous with drought and food shortage in Africa. A search in January 2018 yielded an overwhelming number of pictures of hungry African children, along with photographs of droughts, crop failures and deserts, and a few historic images from Ireland and from colonial era famines. From the top 250 images (125 ‘famine’ and 125 ‘starvation’), just a handful showed scenes of war or concentration camps.

It is often assumed that famine is an overwhelmingly African problem, that comes about because the land is too dry and because the Green Revolution – which expanded crop yields in South Asia a generation ago – bypassed the continent. Wrong, wrong and wrong again. According to the World Peace Foundation, which has recorded 58 episodes of famine and forced mass starvation that killed 100,000 or more people since 1870, of a total of just over 100 million famine deaths, just under a tenth are African. Only an eighth are caused by natural hazards – mostly from the 19th and early 20th centuries. Food production shortfalls certainly contribute to famines, but for every single famine of the past 50 years, they have been far less important than war, dictatorship and economic mismanagement. In many terrible famines, such as Cambodia’s Year Zero under the Khmer Rouge (when 1.2 million people died of starvation between 1975-79), farming technologies were next-to-irrelevant because the starvation was politically driven. Much the same is true of today’s crises in Nigeria, South Sudan and Yemen.

Ever since Thomas Malthus’s Essay on Population in 1798, there’s been a popular belief that famine is nature’s corrective to over-population – just as the number of wild goats on an island could grow to a point where they eat all the vegetation and die of starvation.

The population argument conveniently blames the poor for their own poverty, and is a nice alibi for agro-industries to promote industrial farming as the solution to a global problem. It’s a beguiling metaphor for our reckless exploitation of the planet’s resources – and for sure there are limits to our appetites for consumption.

But while the number of people in the world is one factor in the global resource equation, it isn’t the most important. Most of the consumption of nonrenewable resources is done by the developed world; most of the destruction of the world’s fisheries and forests is the work of corporate capitalism, not the poor. And there’s an empirical challenge to the Malthusian thesis. Over the past 150 years, while the world population has risen from 1.3 billion to 7 billion, famines have hugely declined. That’s even true in countries like Ethiopia, once emblematic of food crisis and starvation, which in 2015 suffered its worst food shortfall ever, yet managed to prevent famine through prompt government action.

During the 1984 BandAid concert for Ethiopia, Bob Geldof famously said, ‘Just give us the fucking money!’ He promised that donating to BandAid and other charities would end hunger, once and for all. Geldof quickly abandoned this naïve view, but the natural human response to starvation – give food – remains remarkably powerful.

Twenty years ago in my book Famine Crimes I criticized international aid agencies for overlooking the political causes of starvation in pursuit of immediate responses – responses that also served their own fundraising and institutional needs. Not only that, I argued, but the charitable response gave a useful alibi to the generals and dictators who perpetrated famine, and often fed their faminogenic regimes as well.

Part of this critique is still valid. The aid response doesn’t address the political and military reasons for famine, and aid workers no longer claim that it does. But it is striking that since the humanitarian agencies expanded the reach of their operations and enhanced the technologies of response – notably in child nutrition, water and sanitation, and primary health – the levels of mortality in famines have dropped in a spectacular fashion. 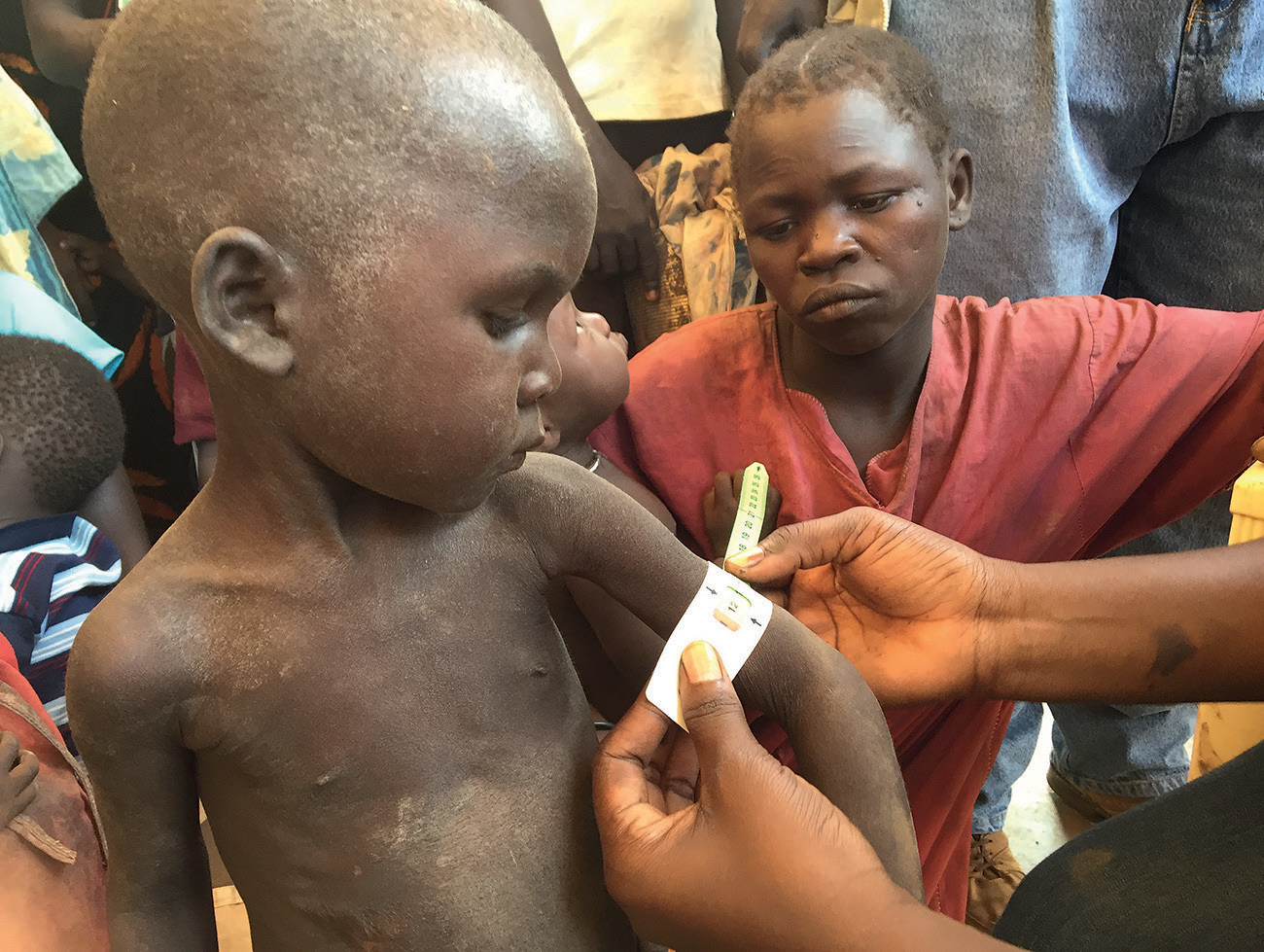 Responses to famines are typically late, and humanitarian aid merely binds the wounds. After the 1980s famines in Ethiopia and Sudan, international agencies invested in early warning, culminating in the early 2000s with the Integrated Food Security Phase Classification (IPC) scale. This is a standardized metric for assessing the risks of nutritional crisis and famine. Designed for poor agrarian countries, it was the basis on which the United Nations declared four countries (Nigeria, Somalia, South Sudan, and Yemen) to be at immediate risk of famine last year.

The UN’s warnings spurred an international response. But the story of the first time the IPC scale was used, in Somalia in 2011, is salutary. At the end of 2010, the IPC data predicted an imminent famine, with remarkable precision concerning its location, scale and timing. But at that moment, the international donors scaled back aid. The reason: the US had a different priority, which was ensuring that not a single kilogram of food aid, and not a single vaccine, fell into the hands of the militant Islamist group al-Shabaab, labelled as terrorist. This was enshrined in the Patriot Act. It took the UN declaration of famine for the Obama Administration belatedly to find a workaround for these restrictions. Without that 10-month delay, 250,000 deaths could have been prevented. (For a Somali view, see page 18.)

The great majority of modern famines are caused by political and military decisions taken without heed to the wellbeing of people. In South Sudan, the government and opposition don’t care about human lives, and it’s easy for them to conduct their war and supply their forces at the expense of civilians. In Yemen, the Saudis and Emiratis don’t have a genocidal intent, but they blockade the port of Hudaida, bomb hospitals, markets, bridges and farms, and squeeze the economy to the point of collapse, in the hope of winning the war against the Houthis. For their part, the Houthi forces tried to starve the city of Taiz into submission, for military advantage. Famine is perpetrated by recklessness.

These are surely famine crimes, comparable to the Khmer Rouge’s forced starvation and the Ethiopian government’s use of food as a weapon in the 1980s. But, up to now, despite efforts to take war criminals to court, no one has been prosecuted for starvation crimes. The tribunals in Cambodia and Ethiopia both considered bringing famine-related charges against former government officials and military officers, but both decided against. The main reason was that the laws prohibiting starvation are complicated and untried. Could the defendant plead that civilian starvation was a regrettable byproduct of legitimate military tactics and as such, not unlawful? This was the successful argument mounted by German generals at the Nuremberg trials, defending their lethal enforcement of the siege of Leningrad in World War Two, when a million people died. Could the defendant argue that there was no proof that specified individuals died because of their actions? This was the argument of the Bosnian Serb general who directed the siege of Sarajevo. Faced with these obstacles, prosecutors in Cambodia and Addis Ababa preferred simpler routes to getting guilty verdicts, and stuck with direct responsibility for violent killings.

In the background to this prosecutorial reluctance was a humanitarian whisper. Aid workers have a tough enough job, including difficult negotiations with commanders whom they have good reason to fear as war criminals. It would be worse if relief workers were also seen as future prosecution witnesses. When the International Criminal Court issued an arrest warrant for the Sudanese president Omar al-Bashir on charges of war crimes and crimes against humanity, Sudan expelled 13 international aid agencies from Darfur. Clearly, a prosecution for a famine crime shouldn’t be a contributor to famine deaths.

A public campaign against starvation

There is no single solution to the evil of famine: ending it requires all of the above – and more. Just as famine is the vortex at which diverse social, economic and political ills come together, so too the ending of famine demands public action across different domains, from agricultural science and global warming to humanitarian action and political accountability.

Reflecting on independent India, Amartya Sen remarked that political freedoms –especially a free media and democratic elections – were instrumental in eliminating famine in that country. But that is also an insufficient explanation. To be prevented, famine had to be politicized. Mass starvation had to be so salient that a member of parliament could lose an election for failing to prevent it, a journalist could win awards for uncovering hidden famine, and a civil servant could win promotion by organizing an effective response or writing a candid assessment of a relief programme.

Internationally, there is much to learn from campaigns that have pushed neglected issues into the spotlight and made them so salient that politicians are compelled to take note. Examples include the ban on anti-personnel landmines and legislation against child labour. But the best parallel is the campaign against rape as a weapon of war. Rape has never been lawful, even in war, but it only became the focus of international action, including assistance to survivors and prosecution of perpetrators, when there was a broad-based campaign to publicize the issue and demand action. Similarly with famine: our aim should be to make starvation so politically toxic that no politicians or generals can contemplate it without knowing that they will henceforth be utterly beyond the pale. Such a campaign can include many people with different outlooks and aims, including old-fashioned charity workers; but it will succeed only if it is a wholeheartedly and comprehensively political campaign.

Alex de Waal is a writer on humanitarian and development issues. His latest book Mass Starvation: the History and Future of Famine is available from Polity.