Veronique Mistiaen meets Afghanistan’s ‘mother of education’, who for more than two decades has been transforming lives through community-based learning. 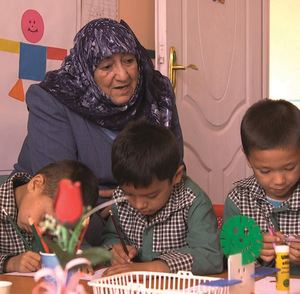 ‘When I first started working in an Afghan refugee camp in Pakistan, my vision was to see the Afghan people transformed through education, so that they could think for themselves, ask questions and solve their own problems. Now, more than 20 years later, my vision has not changed,’ says Sakena Yacoobi.

A small, unassuming woman, Yacoobi morphs into a fiery larger-than-life character when she talks about school and learning. She believes passionately that community-based education can transform societies, and that educating women is the best way to ensure peace and long-term development.

‘Education has transformed Afghanistan. It is unrecognizable from 20 years ago. Women have developed critical thinking, they are asking questions, they run for Parliament. They stand up for their rights – on land, property, marriage, domestic violence, education, citizenship,’ she says, all in one breath.

Yacoobi was born in Herat, Afghanistan, and was aware from a young age of the impact poverty had on her country: ‘There were no schools; no hospitals. People had no way to better their lives. I wanted to change that.’ She studied for a Master’s in Public Health in the US before moving to Pakistan, where she founded her first school in an Afghan refugee camp in 1991. ‘Women had lost everything. They had been through war, they didn’t trust us. So we needed to start from scratch. We asked what they needed and we built a learning centre based on these needs; then we asked the community to get involved.’ The underlying principle gained from that experience – that education should support what people want to do for themselves – still guides her work today.

Within two years of starting that first school, she had worked with 15,000 children. Soon, communities in Afghanistan were asking for her help and she moved back to her own country. She created the Afghanistan Institute of Learning (AIL) in 1995, to offer education, health and training to women and children. Under the Taliban, AIL ran 80 secret home-schools, educating some 3,000 girls.

Her organization now runs 44 learning centres for women and children in Afghanistan and Pakistan, as well as four clinics, a hospital, an orphanage, a programme for street children and a radio station that brings education to isolated regions. AIL has impacted the lives of more than 11 million Afghans and Yacoobi has received many awards for her work, including the World Innovation Summit for Education (WISE) Prize for Education in 2015.

She hopes to expand her community-based education model all over Afghanistan, as well as to other countries. In order to do so, she wants to open a university to train teachers and develop a solid curriculum. She also wants to launch a TV station to promote women’s rights and education.

But there are huge challenges ahead. Afghanistan is one of the poorest countries in the world. Millions of children – especially girls – are still not going to school, and lack of security is a serious issue. Yacoobi worries that international attention and help are dwindling and that there won’t be enough funding to improve and expand schools and provide supplies and teachers.

‘Yes, Afghanistan is in bad shape, but after 40 years of war and conflict, what do you expect? We need to work collectively. It’s an issue for all of us, not just Afghanistan. Give us a chance. We need help; we need more funding and training.’

In spite of the grim situation in her country, Yacoobi is optimistic. ‘There will be setbacks and difficulties, but we are not sitting in a corner saying we cannot do anything about it. We are resilient. We are making a difference. We are changing and transforming our lives through education and we want the world to know that.’

Veronique Mistiaen is an award-winning journalist, writing about human rights, social issues, development and the environment. She tweets at @VeroMistiaen and blogs at therighthuman.blogspot.com