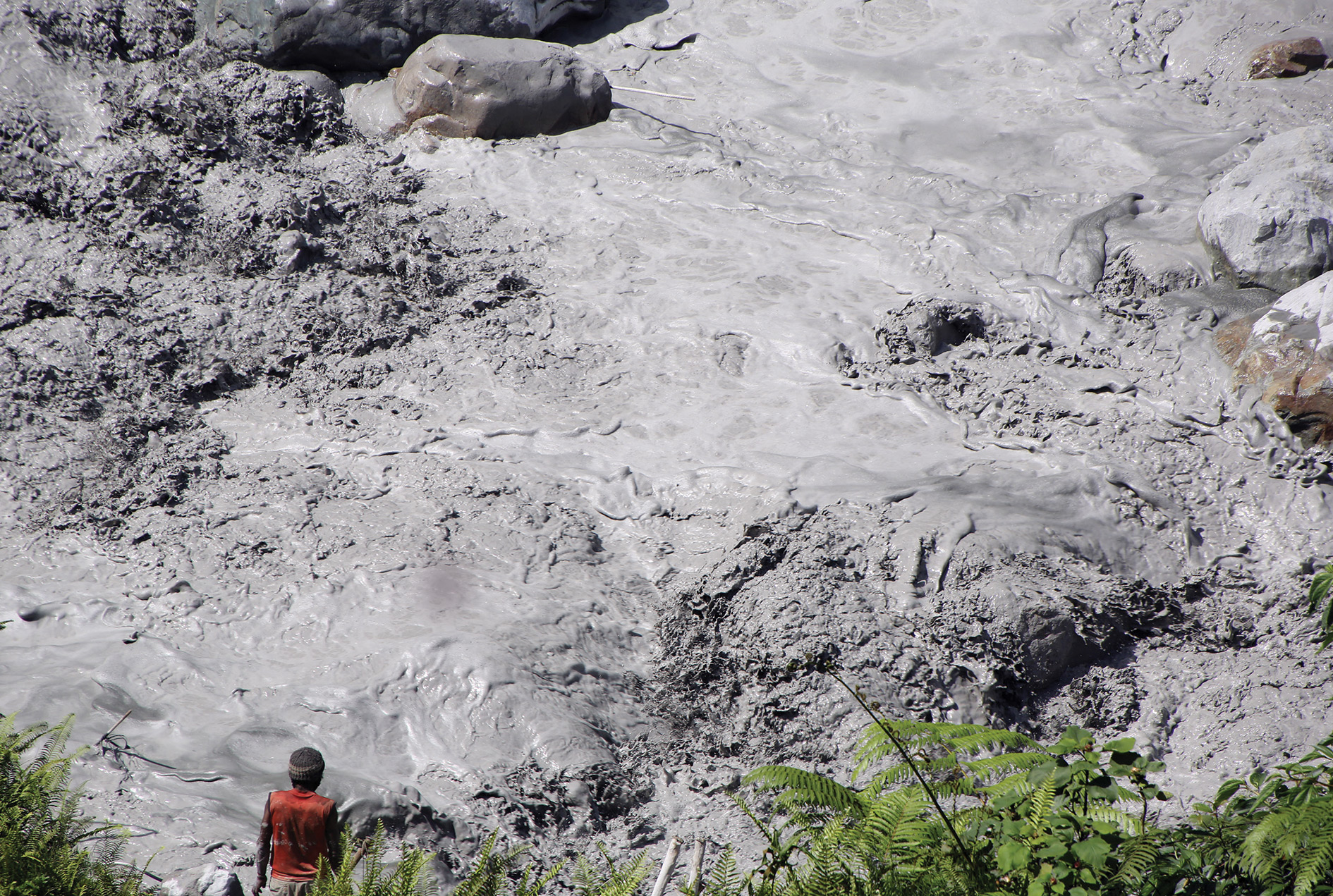 The river of Aikwa, once a local water source, now turned thick and silver by tailings from Freeport’s Grasberg mine.
Photo: Susan Schulman

‘The forests are gone, the river dry, and all things taken away.’

Nestled quietly in Indonesian-occupied West Papua, this project has been held up by BP as a shining example of extraction-led development since the site came online in 2009. But as the oil giant prepares to increase production at Tangguh by 50 per cent, does the rhetoric match the facts? And given the sordid history of resource extraction in West Papua, what role will the project play in the bitter struggle for Papua’s freedom from Indonesia?

Glimpses of a darker reality

Atlantic Richfield Co. began exploring the Tangguh site in 1996. In 2001, indigenous Papuans in the local village of Weriagar told a visitor2 that the grass on the banks had turned yellow and then infant mortality had risen, with many more babies dying. This allegation, like so many others in West Papua, has never been independently investigated. In 1999, the exploration site transferred to BP, and the incident seems to have been forgotten by the company.

Such hidden tales have trickled through Papua’s reinforced borders ever since. In 2008, The Guardian reported the words of Papuan leaders, who claimed that ‘our worst predictions and fears [about BP] have come true’, with forced relocation, an influx of Indonesian migrants, destruction of traditional fishing grounds and loss of local control. Professor Agus Sumule of the University of Papua explains that decisions over resource extraction ‘are now being controlled 100 per cent by Jakarta … in 20-30 years, everything will disappear. So what will local people obtain from this? Nothing. Except perhaps some toxic waste’.3

As BP’s operation expands, the British state’s interest in maintaining Indonesia’s occupation grows with it

Yet the narrative remains dominated by BP. Few studies reference Papuans directly impacted by Tangguh, and most NGOs that provided a critical perspective have lost interest or closed down.

Seeking to avoid the PR-disaster that struck it in Colombia in the 1990s, BP set up the Tangguh Independent Advisory Panel (TIAP) to monitor its operations in West Papua. TIAP, however, ‘carries the word “independent” in name, but not in practice’, according to Andrew Hickman of Down to Earth, one of the few NGOs to have attempted long-term monitoring of the site.4 The panel, he explains, ‘has bought into the idea of Tangguh as a “first class model for development”’, largely swallowing BP’s framing of the issues.5 There is an urgent need for more independent scrutiny.

Casting a proverbial shadow over BP’s enterprise is the giant Grasberg mine in West Papua, owned by US company Freeport and British-Australian corporation Rio Tinto. The mine has faced years of attacks from armed insurgents, huge strikes, and calls for its closure. Freeport has funnelled millions of dollars to the Indonesian security services, and the area around the mine has been the site of regular shootings, often carried out by the Indonesian army as a justification for its lucrative security contracts.

Grasberg not only contains the world’s largest deposits of gold – and third-largest of copper – but is one of the planet’s pre-eminent producers of industrial waste, with over 200,000 tons of tailings dumped in the local river system daily.6 So vast is the waste that a 50-kilometre levee has been constructed by the company to protect the nearby town of Timika from immersion. A study published by Nature in 2016 concluded that, as a result of the mine, ‘Indigenous Papuans have lost their forest, sago, and, in many ways, the [local] river system, itself’. Nabil Ahmed, one of the report’s authors, has argued that the actions of the company – in tandem with the Indonesian state – constitute ‘ecocide’.

Spanish, Swedish and Norwegian oil and gas companies also operate in West Papua. Deforestation driven by palm-oil plantations is causing indigenous land dispossession and contributing to climate change. West Papua contains one of the world’s largest tropical rainforests – covering around 30 million hectares – but this huge area of biodiversity is under threat. A 2015 report describes how Bintuni Bay, home of BP’s LNG fields and ‘once a remote area covered with rainforest and mangrove forest, is in the process of being converted into an industrial landscape’.7

West Papua has become what Naomi Klein calls a ‘sacrifice zone’: ‘a subset of humanity categorized as less than fully human, their poisoning in the name of progress somehow acceptable’.8

The glue of the Indonesian archipelago

These projects further bind the Indonesian state to its occupation of West Papua. Freeport is the single largest tax payer to the Indonesian government, and 75 per cent of the gas extracted by BP’s new infrastructure expansion at Tangguh will go to Indonesia’s state electricity company.

The central elite has long relied on this ‘plundering of the regions’, as Indonesia-specialist Professor Damien Kingsbury puts it,9 in order to maintain political stability in the densely-populated Java. The result: one of the most resource-rich regions of Indonesia – West Papua – has the highest rates of infant mortality, illiteracy and HIV in the country.10

The Indonesian military (TNI) and police lubricate the flow of revenue from West Papua. When 8,000 Grasberg workers went on strike in 2011, an extra 114 armed police officers were brought in, and four demonstrators were shot dead.11 The Indonesian army requires the rents it extorts from corporations to maintain itself. In the early 2000s the TNI secured only 25 to 30 per cent of its budget from the central government, and often still makes revenue through autonomous business activities and security agreements with foreign corporations such as Freeport.12

This flow of wealth from West Papua to Indonesia is a key factor in the government’s resistance to calls for West Papuan independence. As Professor Kingsbury argues, the flows of capital and resources from periphery to centre are ‘the glue that holds the [Indonesian] state together’.13 Indonesia clung on to Timor-Leste ferociously from 1975-1999, eliminating up to half the population in the process – and the small island nation possessed a fraction of the natural resources of West Papua.

When Indonesia orchestrated a rigged referendum in West Papua in 1969 to legitimate its rule, Britain lent Indonesia military and diplomatic support, and did nothing to halt the brutal annexation unfolding before it. According to British diplomats at the time, ‘no Western government would wish to see the [Suharto] government in jeopardy’.14 Crucially for the UK, the blood-drenched Suharto regime had eliminated the Indonesian communist party and signed a sweeping foreign-investment law, opening Indonesia up for British and US corporations to gorge upon.15 ‘The freedom of a mere 800,000 people’, as a British embassy secretary put it in 1968, was ‘scarcely the point’.16

This unofficial pact – open foreign-investment laws in exchange for uncritical support over West Papua – has remained in place ever since. Britain funds and trains Detachment 88 – the elite ‘counter-terrorism’ unit of the Indonesian police – at the Jakarta Centre for Law Enforcement Cooperation, alongside Australian, Canadian, US and Dutch police.17 The unit, deployed as a counter-insurgency force in West Papua, has a human rights record described as ‘appalling’ by Human Rights Watch. As BP’s Tangguh operation expands, the British state’s interest in maintaining Indonesia’s occupation grows with it.

The US has a longstanding strategic alliance with Jakarta that has only increased with Trump’s electoral triumph. A top presidential advisor, Carl Icahn, is the single largest shareholder in Freeport. Shortly after his inauguration, Trump’s company announced the commencement of two huge resort projects in Indonesia. The melding of long-standing US strategic interests with Trump’s private economic ventures dampens hope, in the short term, of a shift in US policy on the Indonesian occupation.

The unsolved dilemmas of decolonization

Papuans have long deployed disruptive civil disobedience to resist resource extraction. Riots against Freeport’s operation, for example, shut down the mine in 1996. Local women dug up root vegetables and built fires on the mine’s airport runways to disrupt operations.18 In 2008, after Papuan landowners and environmentalists organized against a proposed nickel mine on Gag Island, the lead corporation, BHP Billiton, pulled out.19 Pemalangan actions – blockades – have been documented at 14 of West Papua’s 28 palm-oil plantations,20 and have successfully prevented the commencement of others.21

Coordinating with the recently-formed United Liberation Movement for West Papua (ULMWP), the movement’s growing strength means the time is now ripe for a wave of global solidarity. What is needed, according to Papua-specialist Jason MacLeod, ‘are systematic campaigns that target and alter the ways … Indonesia’s Western and regional allies directly and indirectly support violence and exploitation in West Papua’.22 By connecting the dots between fossil-fuel extraction, transnational corporations, climate change, indigenous land dispossession, and Western government support for Indonesia, the global environmental and anti-racist movements can replicate the important role that international networks played in Timor-Leste’s successful independence struggle.

Much of Papua’s forests and culture remains intact, and can be defended by a determined movement; a 2014 study in Nature Climate Change, for example, records how, ‘Papua is at a more nascent stage of forest exploitation’ than other parts of Indonesia. Working to reassert Papuans’ rights to their land against corporate and Indonesian land-grabbing will, at the same time, help tackle climate change by reducing deforestation. As Octo Mote, Secretary General of the ULMWP, told us: ‘protecting Indigenous rights is important for saving the world’.23

If and when their country achieves independence, West Papuan leaders will face another challenge: can they avoid exchanging Indonesian rule for the self-administered rule of transnational corporations? As Professor Hilary Bambrick of Western Sydney University puts it, Pacific countries’ economic dependence on resource extraction ‘simply reflects a continuation of a long history of colonialism and resource exploitation in the region’.24 The threat posed to low-lying Pacific islands by climate change introduces a whole new factor. BP is sitting on 14.4 trillion cubic feet of gas at Tangguh –25 fossil fuel that the Pacific cannot afford to dig up.

West Papuans are seeking solidarity from those in the West who recognize that their privilege and wealth rest on the suffering of millions. When emerging from colonial occupation, the revolutionary Afro-Caribbean political philosopher Frantz Fanon advised: ‘Let us decide not to imitate Europe; let us combine our muscles and our brains in a new direction’. However, he also wrote that the liberation of humanity ‘will be carried out with the indispensable help of the European peoples’, if only they would ‘wake up and shake themselves, use their brains, and stop playing the stupid game of Sleeping Beauty’.26

West Papua: the facts
The drumbeat of resistance