The drumbeat of resistance

‘The struggle is in the song, and the song is in the struggle.’ West Papuan musician Ronny Kareni explains the vital role of Melanesian culture in the fight for freedom. 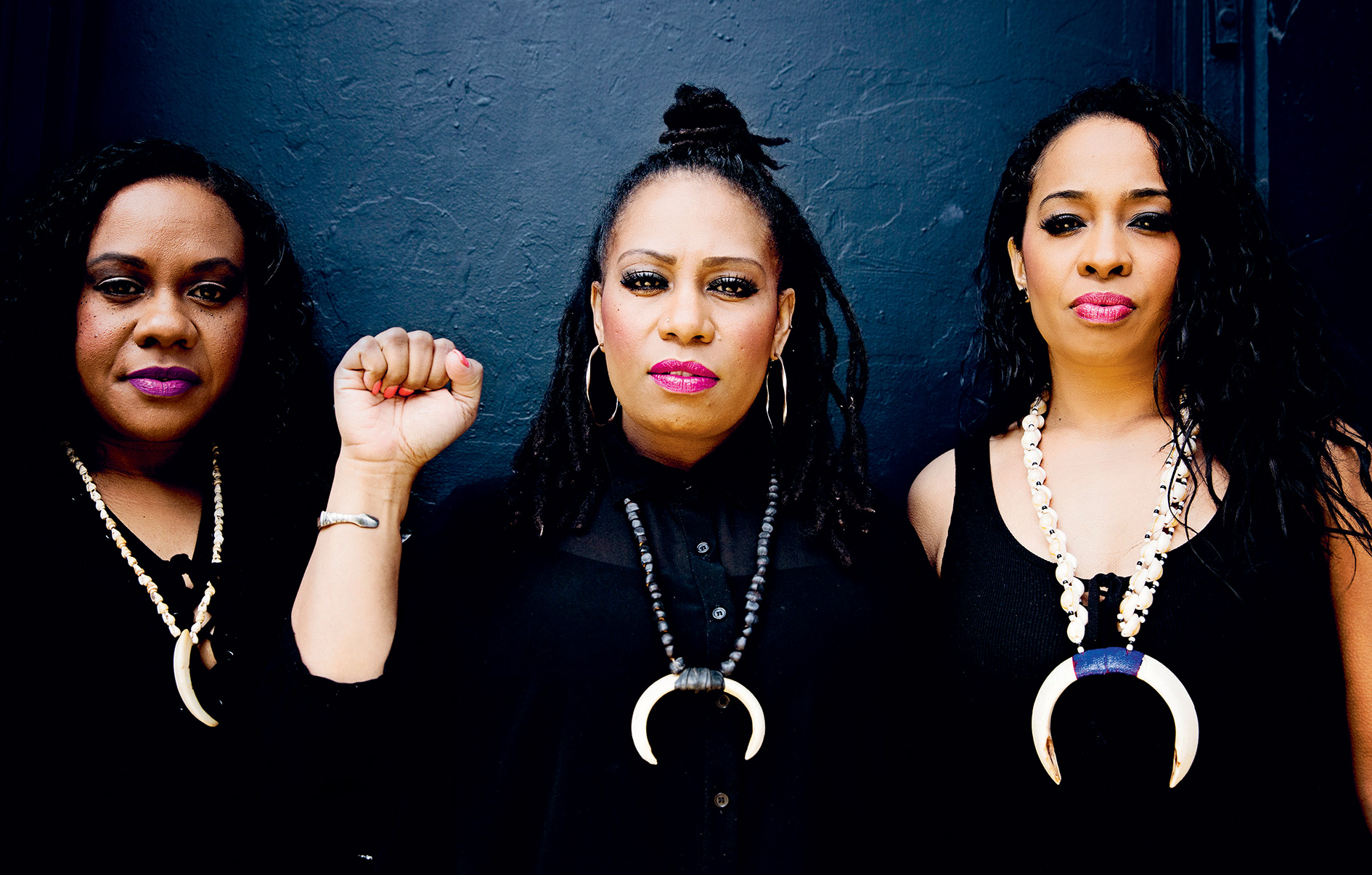 Our drums build to a crescendo, filling the Melbourne Arts Centre with their rapid rhythms. In front of a cheering crowd, a troupe of dancers steps into the space before the stage, wearing traditional headdresses and body paint, and holding aloft the West Papuan flag. It is February 2017, and this is the Rebel Musik tour, bringing Melanesian culture and the cry for West Papuan freedom to audiences across Australia.

The recent reawakening of Melanesian culture and identity is deeply entwined with the movement for West Papuan independence. Like many First Nation peoples around the world, Melanesians had lived as a sovereign people on their islands for tens of thousands of years prior to European colonization. We are people with dark skin and curly hair from a number of Pacific-island nations, including West Papua and Papua New Guinea (PNG). Many Melanesian nations have successfully fought for, and won, their independence – but the people of West Papua are still suffering under Indonesian occupation, and awareness of this injustice is spreading rapidly through the rest of Melanesia.

The Rebel Musik tour featured performers from West Papua, the Torres Straits and PNG, fusing traditional and modern musical styles, and bearing a powerful message about the fight for West Papuan independence. But Melanesian music is more than just a way to carry a message (effective though that is). It is part of our culture and tradition, and is deeply connected to our identity, our land and our struggle.

The land, the sea and the peoples of Melanesia are profoundly linked through family kinship and communal ceremonies of music and dance called sing-sings. The traditional instruments of our different peoples create a recognizable cultural soundscape that echoes in harmony with the mystical sounds of nature, from the kundu drums of Tok Pisin in PNG, to the tifa drums of Bahasa Melayu in West Papua, to the warup drums of the Torres Strait Islands in Australia. In Papua, the voice of the tifa sends messages of connection and togetherness between village societies. Each ancestral group creates music specific to its culture and values, which also chimes with the shared cultural traditions (or kastom) of our peoples and of contemporary life.

Rhythm of the revolution

In West Papua, our culture and identity as Melanesians are under threat, so it is no coincidence that we are seeing a resurgence in these traditions. The impact of neo-colonialism and imperialism has brought Melanesians to a crossroads between kastom and Western ideals. Arts and culture have a vital role to play, to fight back against the colonization of the minds of the Melanesian people.

Prominent Papuan music producer and drummer Airileke Ingram led the Rebel Musik tour. He treasures the sound of the kundu, his musical weapon of choice. ‘The kundu sends a message of unity, community and identity for Melanesian people,’ he explains. Ingram is seen by many artists as a leading ambassador for Melanesian culture. Through Rebel Musik, he brought together rising stars from Port Moresby’s urban music scene, traditional Melanesian dancers and Australian artists to create ‘urgent, political, in-your-face musik from one of the harshest urban environments on the planet’. Kwakumba flutes and garamut slit-drums fuse with rapping and dubstep in a powerful celebration of Melanesian culture.

Renowned bassist, singer and songwriter Richard Mogu is a leading light in the contemporary PNG music scene. He explains that while the kundu drum has different names across the region, when it speaks it is always ‘the extension of the Melanesian voice’. As he puts it: ‘The kundu drum speaks louder, as it carries the voice of the people.’ He believes that art can be a vital vehicle for addressing the issues facing Melanesia: ‘Art serves its divine purpose when it talks about the important things that affect people’s livelihoods’, which is why ‘we’ve been advocating for West Papua’s fight for freedom’.

West Papuan musicians have long understood the power of their traditional music as a vehicle for dissent and protest. The independence movement owes much to the legacy of hugely popular musicians such as folk-music pioneer Arnold Ap.

As well as being a musician himself, Ap was a musicologist and anthropologist and, in the late 1960s, he travelled across West Papua recording songs sung by different tribes in their own languages, at ceremonial sing-sings and other traditional events. He understood the power of music to unite people, and to counter Indonesia’s neo-colonial tactics of divide and rule. The songs he wrote and archived promoted West Papuan identity and helped foster a sense of national pride among his people. Many of the songs called on the Papuan people to use their own languages and to revive their own culture. Although Ap was murdered in jail in 1984, he is still an icon and an inspiration for West Papuans, and music continues to be an important rallying point. Artists from around the world, including First Nations artists from Australia and Aotearoa, have written songs in solidarity with West Papua, many under the banner of the ‘Rize of the Morning Star’ cultural movement. Airileke Ingram, himself a leading figure in that movement, explains that ‘music does not create political change, but acts as a conduit for change that stirs people into action and calls attention to oppression, and bridges the divide between people of diverse cultures’.

The sound of solidarity

Artists from around the world, including First Nations artists from Australia and Aotearoa, have written songs in solidarity with West Papua

The Black Sistaz are a musical trio formed by three daughters of the late Agust Rumwaropen of the legendary West Papuan group the Black Brothers. In the words of lead singer Lea Rumwaropen: ‘Women play a pivotal role in the West Papuan struggle... I want the women in West Papua to know that, through us, they have a voice that is finding ways to reach the world and gain support – I want them to know that their work doesn’t go unnoticed outside of West Papua and their lives are worth more than gold.’

Music and arts have played a vital role in building a new sense of solidarity among Melanesian people of different nations, particularly over the last few years. Following increased calls for action from their populations, the governments of Melanesian countries such as Vanuatu and the Solomon Islands have started speaking up at the UN against Indonesia’s repression of West Papuans. In 2015, the Melanesian Spearhead Group (MSG), an important regional grouping of Pacific nations, welcomed the United Liberation Movement for West Papua (ULMWP) as an Observer member, despite fierce opposition from Indonesia. This gives the ULMWP – the political leaders of the independence movement – a boost to their credibility as a serious government-in-waiting.

The role of music in West Papua’s struggle to maintain Melanesian culture continues to rise above Indonesia’s tyranny. It amplifies every part of the resistance movement. Spiritual awakening through music is inspiring Melanesians into action. It is not just about West Papuan independence: I believe that the sound of Melanesian tifa music will play a key role in every other political and social struggle that our people face. From the US civil rights movement’s ‘We Shall Overcome’ to the ‘Rockers’ music of Jamaica, it is rare to find a resistance movement that did not utilize the power of music. For, as Arnold Ap once said, ‘The struggle is in the song, and the song is in the struggle.’

Ronny Kareni is a Papuan advocate with Rize of the Morning Star, a movement that engages artists and musicians to highlight the West Papuan independence struggle. He came to Australia as a student in 2003 and now lives in Canberra.