Thanks to the efforts of Catherine Shovlin, a Syrian refugee camp is building a community spirit. Florence Derrick meets her. 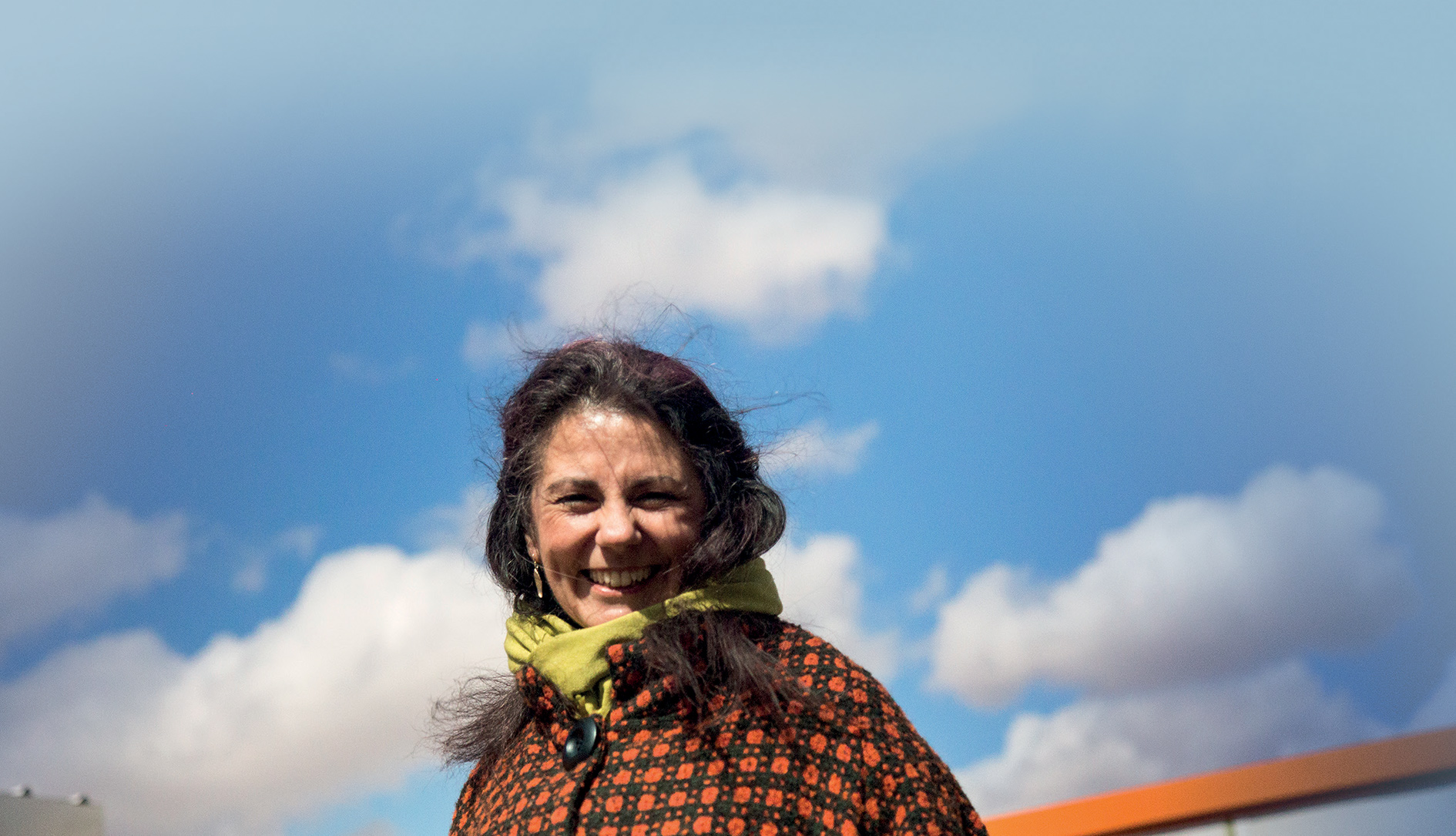 At the end of a 100-kilometre drive from Amman, through barren, ochre desert, a sea of pointed white roofs glints on the horizon. Gain some ground, and 10,000 metal huts emerge from the haze. This is Azraq, an isolated refugee camp in Jordan, 90 kilometres from the Syrian border, where 35,449 refugees currently live – most having fled from war-torn Aleppo.

Venture into the heart of the camp, where homogeneous ‘villages’ have been built around water taps, and you will find something unexpected: some of the huts’ blank exteriors have been painted in a shock of primary colours. This is the work of Artmongers, a South London-based collective on a mission to create beauty in the face of adversity. Co-directors Patricio Forrester and Catherine Shovlin first came to Azraq in 2015, having been granted access via the US humanitarian organization CARE, to assess wellbeing (with the help of some Syrian teenagers collecting data) before and after running this wall-painting project.

During her time at the camp, Shovlin – a social researcher for governments and NGOs – discovered women were at a disadvantage in terms of social connection. ‘I was struck by the isolation of many women there, who for various cultural, social and emotional reasons weren’t leaving their shelters,’ she explains. ‘Sixty per cent of women hadn’t seen anybody the day before they took the survey. Cut off from friends and social connections, they sit inside their safe but uninspiring shelters just waiting for the days to go by.’

When her survey revealed that recorded wellbeing among women in the camp had improved by 40 per cent since the painting project, Shovlin devised a second programme, in the hope of sparking the kind of community support that she saw was lacking.

Fast-forward two years, and Shovlin is taking turns with five chattering Syrian women to haul a heavy speaker on a trolley along the dirt-track veins of Azraq camp. She had approached the women at the camp’s community-centre sewing group with the aim of airing audio material around the camp’s public spaces, starting with Hay el Matar (hayelmatar.com), a UNHCR-approved, Arabic-language radio soap opera written by and for Syrian refugees in Beirut. The drama touches on civil war, domestic violence, education and migration, through the lens of classic soap-opera tropes: love affairs, family disputes and personal conflicts.

‘When we first approached them, they were a bit puzzled,’ Shovlin recalls. ‘But when I explained how I’d noticed the isolation of women in the camp, they got it. They started bouncing ideas around on how else the portable speaker could be used – for storytelling, language lessons, even music from the camp’s own rapper.’

Despite a nervous first outing (‘These women aren’t used to standing out in public, so they were a bit scared’), by the afternoon of day one, the group had taken charge. They generated interest by blaring out songs by Syrian pop star Shahd Barmada at the camp’s supermarket and football pitch, where young men broke into spontaneous dance.

Having spent the morning spreading the word, a green tarpaulin mat was finally unfolded, eight stools laid out on top, and Shovlin pressed play for the first 15-minute episode.

‘At first it was just me and one other woman, with a circle of empty stools in the wind,’ smiles Shovlin. ‘But gradually women began to pop their heads out of their shelter doors.’ By the end of the week, 20 women would gather, along with their children, sitting on the tarpaulin and sharing stools.

For Shovlin, the goal is to encourage women within Azraq, and in other camps where the same project could be applied, to use the portable speaker – or ‘pop-up party’, as it has been coined by the refugees – as a tool to take ownership of the space. ‘People in refugee camps feel that they’re not allowed to do anything to improve their environment,’ she says. ‘But just gathering together allows women to share experiences, and to realize that there are things they can change. Art gives people a jolt. It makes them think again about things they’ve grown to accept.’

As for the women now running the project in Azraq, things continue to go well. ‘We’re 100-per-cent engaged with it and really happy to be recruiting new members,’ one tells us, while another claims: ‘The pop-up party has become a part of us. Now we’re all benefiting from that.’

Florence Derrick is a journalist and editor specializing in travel, culture and gender equality. She has written features for International Business Times, France Media Group and Rosa, the UK fund for women and girls.
@FlorenceDerrick