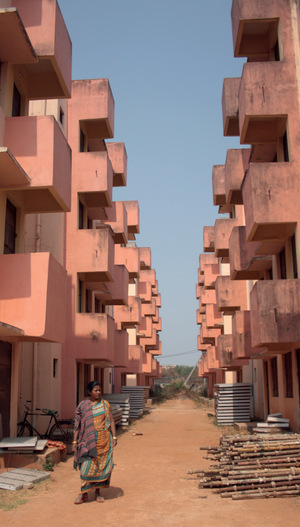 In Bhubaneswar a woman wanders through a deserted apartment complex built under the 15-year-old Basic Services for the Urban Poor scheme. The city and slum residents blame each other for the delay in assigning the 192 empty apartments.
Photo: Nimisha Jaiswal

Prashant Kumar Das sat outside his home staring into the distance. A few hundred metres away a block of unpainted grey apartment buildings lay deserted. The 58-year-old lives in Bhubaneswar, a city in Odisha state about 400 kilometres southwest of Calcutta.

‘When they brought us here they told us they’d give us concrete houses in three months,’ he recalls. Behind him his self-built house consists of tin sheets, discarded signboards and thatched wicker, with a line of washed clothes strung in front. Eighty other similar homes crowd around his. ‘It’s been over a year now and we haven’t even been assigned transit houses yet.’

Until last year Das lived in a brick-and-mortar house he had built in Venkateshwar, one of the oldest slums in the city. Then in January 2016, Das and 80 other families were given $100, a plastic bag for their belongings and told to clear the area. A decision had been made to construct municipal offices at the site of the slum. They were driven to a deserted plot of grassy land behind the apartment complex and told to construct temporary shelters ‘for a few months’ until they could be assigned transit houses.

Venkateshwar falls within the area earmarked for the first phase of Bhubaneswar’s Smart City project. India’s ‘Smart City Mission’, the brainchild of Prime Minister Narendra Modi, aims to transform select cities across the country into models of technological and infrastructural innovation. Under the wing of the Ministry of Urban Development every Smart City is supposed to feature housing for all, comprehensive public transport, green spaces, walkable streets, dependable water, electricity and internet connectivity, and citizen-friendly governance.

In 2015, 98 cities across the country took part in the Smart City Challenge by submitting proposals detailing plans. There were 20 cities shortlisted but Bhubaneswar, the capital of Odisha, won the competition.

Today, hoardings across the city still boast of this achievement. But the 300,000 slum-dwellers in this city of a million people are far from pleased.

‘They want to build up a new class, a city within a city,’ says Suresh Panigrahi of the Odisha Basti Basinda Mahasangha, a slum-dwellers’ rights group. ‘The corporate loot of land will take place under the Smart City project.’

‘We made this city’

Like other major cities in India, Bhubaneswar has seen a steady stream of rural to urban migration over the last two decades. Most of city’s slum residents came in search of work, driven from small towns and villages by rural poverty and debt.

This migration has sparked a steady rise in the illegal occupation of land and the chaotic construction of new slum housing. Many of these homes are made of bricks and cement. None of the tenants have legal deeds or the city’s sanction. Electricity lines and water supplies are ingeniously diverted from the main lines.

Yet, the city’s relationship with the slums is symbiotic. The oldest slums house families that provided cheap the manual labour, workers who built the apartments, office towers and even the railway lines of the rapidly growing city.

‘They scold us for making illegal houses. But they don’t see that we clean their homes, we make their food’

‘They scold us for making illegal houses,’ says Ramraj Sharma, a slum-dweller and activist. ‘But they don’t see that we’ve made this smart city with our own hands. We clean their homes, we make their food.’

Krishan Kumar, managing director of Bhubaneswar’s Smart City project and the city’s Municipal Commissioner, denies that the plan will leave slum-dwellers in the lurch.

‘We were certain that issues relating to social equity had to be addressed because the plan had been criticized for being an elitist programme. That is why we included slum redevelopment, social equity centres and affordable housing as part of the proposal.’

According to Kumar, half the people in the Smart City area are slum-dwellers and city administrators are determined that no-one should be uprooted. The plan includes four housing programmes aiming at building an ambitious 6,000 houses for 5,600 urban poor families. Kumar expects construction to begin in September.

‘The basic idea is that housing for all should happen quicker than 2022,’ Kumar explains. ‘This plan should lead to the improvement of the lives of slum-dwellers. They should feel happy about Smart City.’

So far, however, Bhubaneswar’s poor have little reason to embrace the Smart City plan. For the most part that’s because they have no inkling about what the plan is.

‘Smart City is about maintaining cleanliness in your home and on the roads,’ says Apna Rao, a 28-year-old resident of the Banphul slum. Nearby, garbage lay strewn over an empty plot and a rooster picked its way through the crowd. 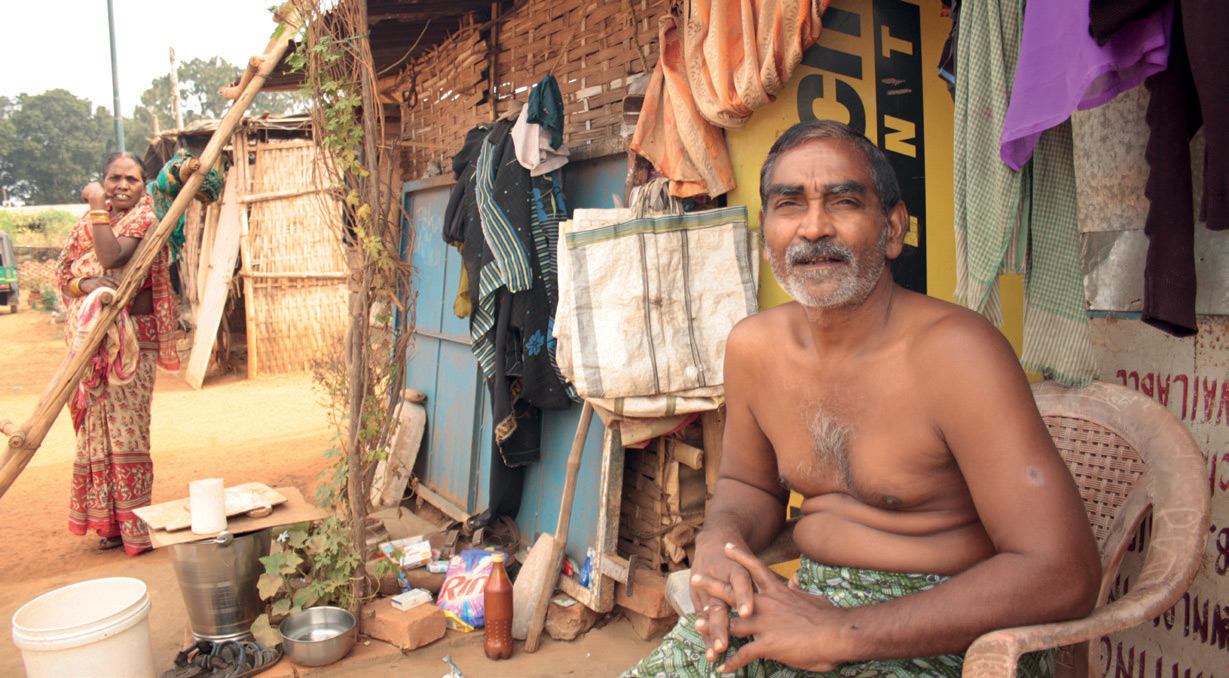 Prashant Kumar das in front of his temporary home. Last year he was forced from a brickand-mortar house, his home for 25 years, so municipal offices could be constructed at the site of the old slum.
Photo: Nimisha Jaiswal

‘I hear about the plan when they say: “Oh, they’re demolishing something for Smart City”. That’s all I know,’ adds TN Behra, a 45-year-old from Sai Nath slum.

When asked what they knew about the plan, residents from five different slums said they’d had no visits from city officials to gather their input about the Smart City proposal or to inform them about the changes they can expect under the plan.

The communication gap between city administrators and slum-dwellers (coupled with rallying cries of activist groups across the political spectrum) has led Bhubaneswar’s poor to believe that the city wants to be rid of them because they don’t fit in the picture of rapid development.

‘There are illegal flats constructed nearby but those rich people keep sending city officials here instead, telling them to tear down the slum first,’ says Sai Nath resident Govindchandra Pujari. Sai Nath is one of the city’s older slums and has a strong history of resistance. Residents claim they received no notice from the city about the demolition. They’ve turned away demolition teams twice in two months.

Smart City is not the first slum redevelopment scheme. Residents across Bhubaneswar are well aware of previous ‘housing for all’ plans. The previous government ran the Rajeev Awaas Yojana or Rajeev Housing Scheme, widely known as RAY.

Under RAY thousands of slum houses were assigned numbers, so a record of ‘permanent’ residents could be maintained. Sai Nath claims to have been cheated of this right as well.

‘There is no record of this area,’ notes Pujari. ‘And when we ask for land title deeds, they turn us away.’

Meanwhile, Commissioner Kumar claims the Venkateshwar evacuation is not slum redevelopment in the usual sense. It was a ‘unique’ situation because the land was urgently required, he said. The 67 families had to be cajoled to move to a ‘temporary location’ but he insists they will be assigned transit houses soon.

Prashant Kumar Das is not happy with the thought of a transit house. At 10 by 10 feet with a small window, the transit houses are definitely small. Slum-dwellers imagine them to be restrictive, taking away the option to expand their living spaces.

Those who have moved into the transit houses, however, have found their way around these restrictions.

‘I like it here; there is free water, electricity and shelter,’ says Yana Janaki, a 65 year old woman who was relocated from Narayan slum seven years ago. ‘Why would I leave?’

When over a 100 families from Narayan were shifted to transit houses in 2010, 80 families stayed on to fight the move in the Odisha High Court. They won.

Janaki was a part of the resistance but now she is satisfied with her new quarters. It is still just one small room per family, but several have erected tin sheds and constructed attachments to form a messy but larger living space.

Despite mixed opinions, the rehousing of 300,000 people is a massive undertaking. ‘We are moving in a phased manner with the objective of starting 10,000 houses this year,’ says Commissioner Kumar. ‘We are trying to develop many houses in situ or close to the original slums so the lives of the residents are not dislocated.’

In February 2017, the state government began to look at hiring specialist NGOs to bridge the communication gap between authorities and slum residents.

Indeed, documenting each slum resident and verifying their claims to subsidized housing could take years.

At the Bhubaneswar Municipal Corporation (BMC) office of Anand Patnaik, thousands of loose papers line tall shelves along the walls. They are documents from the RAY surveys conducted under the last government.

‘There are 24 slums under the Smart City plan,’ explains Patnaik. ‘I am sure those people have doubts. But there is nothing in those disorganized settlements, they live without any facilities.’

Patnaik mentioned 3,660 houses currently under construction, 120,000 houses to be completed under RAY and 902 transition houses that are to be assigned ‘soon’.

Both BMC and Smart City officials are well versed with the statistics. And while 80,000 families fit deftly into their calculus, city authorities struggle to assign the few houses that have been built.

The challenge is not lost on city authorities.

When asked about the likelihood of completing the Smart City project before 2022, the BMC’s Patnaik smiled and said, ‘No comment.’

Nimisha Jaiswal is a freelance writer based in Delhi. She is a frequent contributor to New Internationalist.

Homelessness – The Facts
Homeless voices from around the world