Power rests in the hands of a corrupt military and political oligarchy that denies people the right to self-determination, reports Hamza Hamouchene. 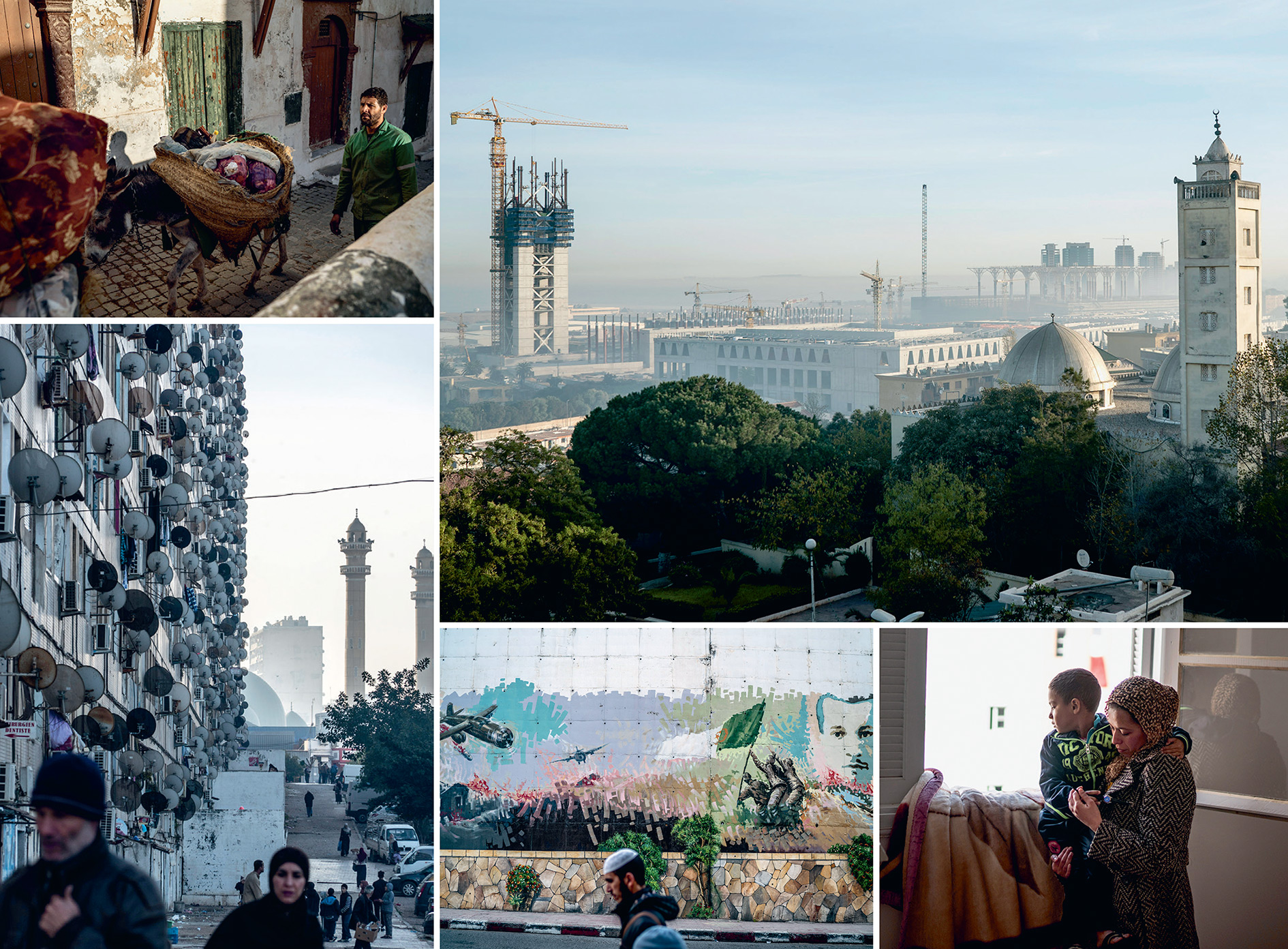 Clockwise from top right: The Great Mosque of Algiers, which will contain the world’s tallest minaret, is being constructed in Mohammedia, near the capital, while an older mosque looks on; Nabila Ounas and her son in their new, government-supplied apartment in Cite Kourifa, 20 miles from Algiers; a man walks past a mural commemorating the war of independence against France; satellite dishes cling to the external wall of a tenement building called ‘Les Dunes’, said to be the longest building in Algiers; donkeys transport rubbish from the casbah in Algiers through the narrow streets.
Photos by Andrew Testa / Panos Pictures

Algiers la blanche cuts an impressive dash, sprawling up the hills that overlook its bustling port and its sweeping Mediterranean bay. Yet this is a capital city that has been somewhat sidelined and isolated by its recent history, while not that long ago it was an iconic source of hope.

In 1830 Algeria was not only the first Arabic-speaking country but also the first land in Africa to be subjugated by a Western empire. The Algerian independence struggle against France between 1954 and 1962 was one of the most inspiring anti-imperialist movements of the 20th century and when it was finally successful Algiers became a Mecca for revolutionaries all over the world. For a big part of what was already called the Third World, especially those countries that were still under the grip of colonial domination, Algeria was seen as a pioneer of anti-colonial initiatives and internationalist co-operation during the 1960s and 1970s.

Its activism on the international stage was matched at home by progressive social achievements such as democratizing education, giving most people access to health services and providing secure employment. By 1980, Algeria was one of the most industrialized states in Africa, with significant management and technological expertise.

Things took a turn for the worse in the mid-1980s. With the fall in oil prices and a changing regional and international context, Algeria’s autonomous development programme was deemed to be ‘a failure’ and replaced by a market economy. As elsewhere in the region, this entailed de-industrializing the economy, dismantling and privatizing public companies, deregulation and other forms of neoliberal restructuring.

The failure of ‘secular’ nationalism to deliver the promised prosperity and independence propelled Algeria’s Islamist movement onto the political scene and it quickly garnered a significant following, particularly among the poorer sections of the population. The military coup that cancelled the elections of 1992, which the Islamic Salvation Front had been set to win by a landslide, effectively opened the doors of hell. 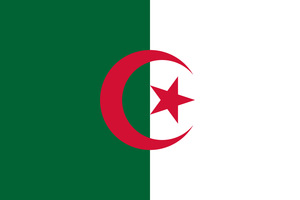 The subsequent war between the military and Islamist insurgents involved horrific atrocities on both sides and cost tens of thousands of lives. Yet Algerians in the 1990s had to cope not only with civil war but also with the forced economic liberalization and harsh austerity measures dictated by the International Monetary Fund (IMF) and the World Bank.

Algeria in the 21st century is blighted by political stagnation. Power rests in the hands of a corrupt military and political oligarchy that denies people the right to self-determination, while effectively operating for the benefit of domestic and international capital.

This ruling elite was relatively untouched during the ‘Arab Spring’ of 2011. This was in part because its diffuse form of dictatorship was harder to dislodge than one that offered a precise target for popular resentment, as with Ben Ali in neighbouring Tunisia. Algeria’s own ailing president, Abdelaziz Bouteflika, has not been seen in public since May 2012. In addition, the regime has used the country’s significant reserves of oil and gas not only to purchase relative peace domestically but also to secure international acquiescence to its continued rule – Algeria is, for example, the third-largest provider of natural gas to the European Union. Ironically, it is the recent slump in oil prices that may just open up the cracks in the stagnant political model.

The bankruptcy of party politics in Algiers has meant that the growing dissent and discontent of the past few years have been expressed instead through the emergence of social movements organizing around environmental and other issues. These are particularly strong in the Sahara, which provides most of the country’s natural resources and foreign exchange but whose inhabitants have hitherto been completely marginalized. 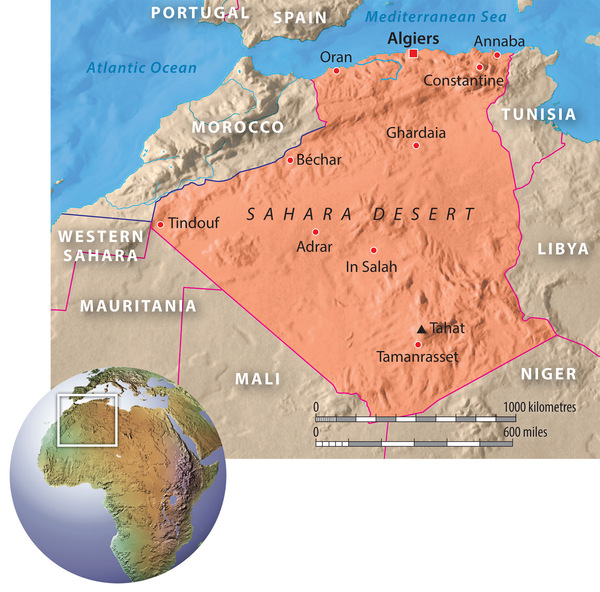 Leader
President Abdelaziz Bouteflika (since 1999); Prime Minister Abdelmalek Sellal (since 2012).
Economy
GNI per capita $5,490 (Tunisia $4,230, France $42,960).
Monetary
Algerian dinar.
Main Exports
Oil, oil products and natural gas – 95% of export earnings. Earnings from hydrocarbons have resulted in a very low level of external debt – around 2% of GDP. However, the government has been forced to draw heavily on its reserves in recent years and has imposed restrictions on imports to try to prevent these from further depletion. Youth unemployment is dangerously high.
People
39.7 million. Annual population growth rate 1990-2015: 1.7%. People per square kilometre: 17 (France 122).
Health
Infant mortality 22 per 1,000 live births. Lifetime risk of maternal death 1 in 240 (France 1 in 6,100). HIV prevalence rate: less than 0.1%.
Environment
The Sahara Desert dominates – only 17% of the country is agriculturally useful and only 3% of it is arable land. Pollution of rivers and coastal waters by petroleum refining waste and other industrial effluents is a problem. In 2015 there were major demonstrations in southern Algeria against fracking for shale gas.
Culture
Almost all Algerians are Berber rather than Arab in origin but only around 15% actually identify as Berber and speak the Tamazight language.
Religion
Almost entirely Sunni Muslim.
Language
Arabic, French and Tamazight are all now official languages.
Hdi
0.745, 83rd of 188 countries (Tunisia 0.725, France 0.897).

Income Distribution
Liberalization of the economy during the past three decades has significantly increased inequality. A new parasitic class of nouveaux riches has emerged while unemployment and poverty are rising.
1999
Life Expectancy
75 years (Tunisia 75, France 82). The current public healthcare system is poor and dysfunctional for many reasons, including corruption and mismanagement, but it is also being undermined to open the door for private investment.
1999
Position Of Women
Despite some recent cosmetic reforms to improve representation of women in state institutions, women still face discrimination, having to fight retrograde laws as well as patriarchal social practices.
1999
Freedom
The state of emergency was finally lifted in 2011 after 19 years but harassment of human rights activists, trade unionists and journalists continues and demonstrations are still banned in the capital.
1999
Literacy
73%. Primary school net enrolment stands at 99%.
1999
Sexual Minorities
Homosexuality is illegal and punishable by up to two years in prison. However, in practice, it is not tightly restrained by the state unless minors are involved. LGBT+ issues are generally considered taboo.
Politics
The current government is not only incompetent, corrupt and repressive but also has a poor record in terms of respect for human rights. Constitutional reforms in 2016 were claimed as an advance for democracy (limiting future presidents to two terms) but would still allow Bouteflika to run for a fifth term as president in 2019. Privatization, economic liberalization and the imposition of harsh austerity measures all continue.
1999