When the police are paid by the mine 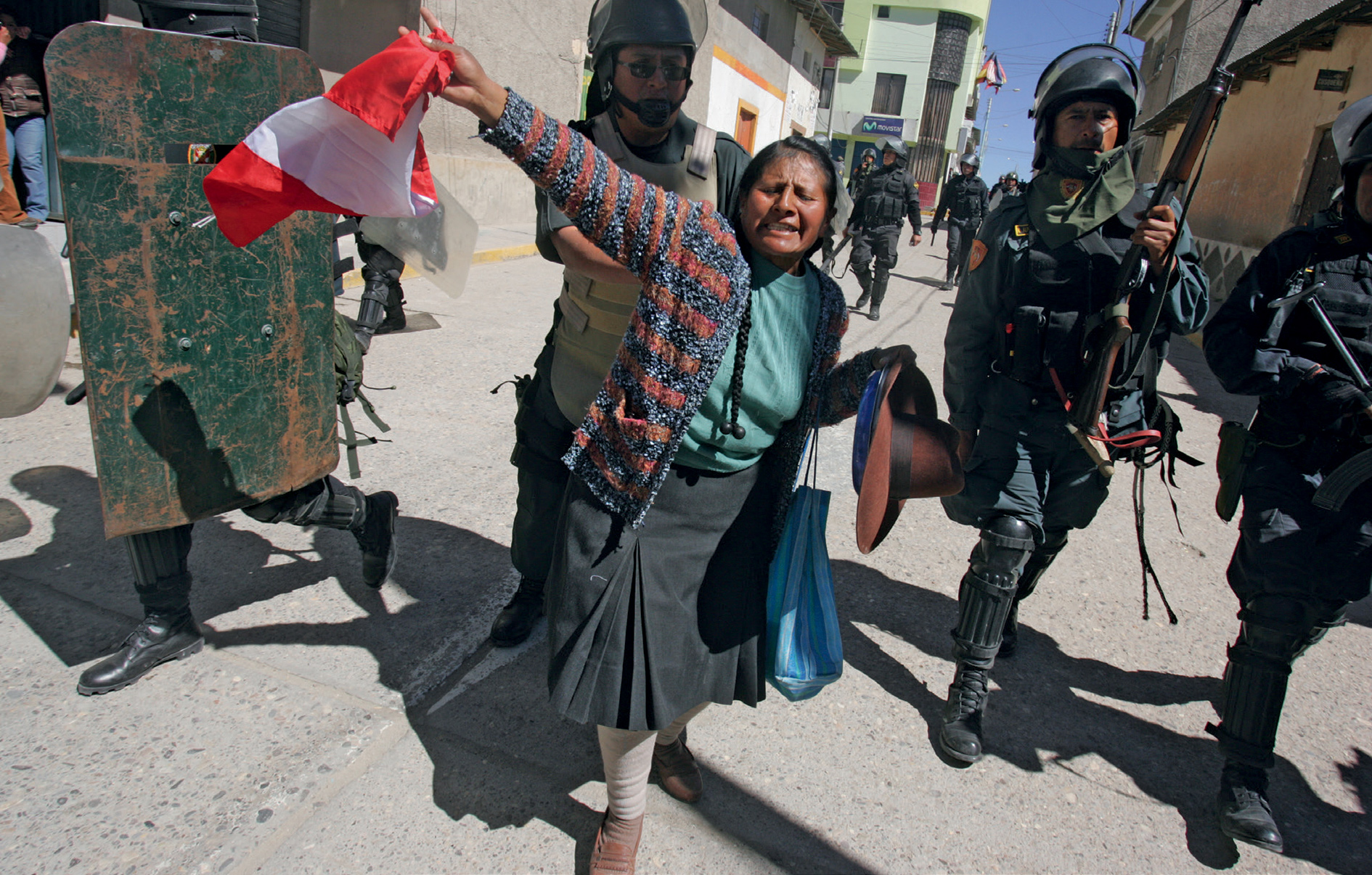 Police come up behind a protester opposed to the Tintaya Copper mine in 2012. Their violence later resulted in three deaths.
Photo: Miguel Gutierrez

It was the coldest night of 2012 in Peru’s southern Andes when Jaime Borda, a representative of the Catholic Bishop of Sicuani’s human rights office, stopped outside the gates of the Tintaya copper mine. The previous week a protest over allegations of environmental contamination and other abuses by the mine had turned into violent conflict, resulting in the deaths of three civilians at the hands of police and more than 100 wounded.

On the evening of 28 May, Jaime, along with a human rights lawyer and the state district attorney, were investigating a report that police had detained protesters inside the mine’s compound. They were accompanied by Sergio Huamani, a soft-spoken leader of the local defence front.

The mine’s security allowed the district attorney and lawyer to enter the compound and made Jaime, Sergio and their driver wait out front in their truck.

They did not wait long.

Police officers in riot gear soon swarmed the truck and dragged the three men to the ground. They were beaten, threatened and called ‘dogs’ and ‘terrorists’.

‘I thought they were going to kill us,’ said Jaime. They were taken to a secret police station inside the mine where they were forced to stand for nearly 48 hours in freezing temperatures. In all, 22 people were detained without warrants or legal counsel.

Jaime and other victims have filed a claim in Britain against the mine, then owned by Xstrata (which has now merged with the Anglo-Swiss transnational Glencore). The case could be heard some time this year.

Last year, the British court admitted an email the company’s lawyers had tried to suppress. Written by the company’s then-director Charles Sartain to its senior South American manager about a month before the protests, the email proposed a ‘direct, proactive and strong approach’ to confront community leaders whom he referred to as ‘sons of whores’.1 Jaime is hopeful about the case, but says compensation is not enough – he wants to prevent such incidents from happening again.

While in detention he was struck by the close relationship between police and the mine’s security. The police station inside the mine’s compound was unorthodox and suggested a partnership. Jaime remembers it well: a single, large room, made of sturdy concrete with a tiled roof, furnished with simple desks and chairs and a bathroom for the officers’ use. There were handwritten calendars on the wall outlining the officers’ tasks and charts noting their rotations over several months. This was not an emergency set-up in response to the crisis. The officers had clearly been occupying the space for a while.

A month before the protests, I had visited the mine with provincial government officials. Our visit was unexpected and we were stopped by one of the mine’s vehicles. A Peruvian police officer stepped out with a bright yellow vest from the mine over her uniform.

She asked to see our identification.

We asked to see hers.

‘Are you a police officer or do you work for the mine?’ I asked her.

‘I’m a police officer and I work for the mine,’ she replied.

My companions were outraged and began shouting: ‘How could a police officer work for the mine? Wasn’t she paid by taxpayers’ money? Did she answer to a foreign company or the Peruvian people?’

These incidents at the Tintaya mine fuelled an investigation by human rights groups that discovered contracts between oil, mining and gas companies and Peru’s national police. Through freedom of information requests, 118 contracts were obtained, dating from 1995 to the present, including a contract for the Tintaya mine, now called Antapaccay. This contract was extended ‘indefinitely’ in May 2013.

The agreements require the police to provide 24-hour security for the company’s property, in exchange for salaries, food and lodging. Most stipulate that officers use their government uniforms and weapons, with some including special provisions for riot police should an uprising occur.

Maritza Quispe, a lawyer at the non-profit Legal Defence Institute (IDL) in Lima, says the contracts are legal, but unconstitutional. ‘Peru’s constitution states that the role of the police is to maintain order and internal security,’ explains Quispe, adding that receiving payment from a private company compromises police neutrality.

Quispe presented the case to the Human Rights Commission of the Organization of American States (OAS) this May. The commissioners called on the Peruvian government to stop issuing the contracts. Her next step is to file a case with Peru’s Constitutional Court, one of the country’s highest judicial bodies.

The Peruvian contracts have provided the ‘smoking gun’ for an issue that plagues mining operations around the world.

In Papua New Guinea, security guards and police paid by Barrick Gold’s Porgera Joint Venture mine have been accused of sexual abuse and gang rape since the 1980s.

The most recent incident occurred on 25 March, when police raided a settlement near the mine and burned down houses. Officers were accused of gang raping indigenous Ipili women and assaulting men during the raid. Barrick admits they provide ‘limited assistance’ to police in the area but claims no human rights violations occurred during the raid.

Everlyn Gaupe was raped when she was a teenager by the mine’s security guards. She travelled to Canada in May to ask the government for help and gave a stark testimony: ‘Can you imagine a young school girl being brutally beaten and gang raped on the edge of a river of bright red chemical waste from the mine?’2

The company started a remediation programme for victims of sexual assault in 2012. But Catherine Coumans from Mining Watch Canada says the programme only considers women raped by the mine’s security guards and does not include victims of police officers paid by the mine.

Barrick’s relationship with police in Tanzania has also come under fire. According to a Tanzanian government report, 65 people have been killed and 270 injured by police responsible for security at the company’s North Mara Gold Mine. Human rights groups says the real number is much higher and cite more than 300 violent deaths at the mine since 1999.3

Mining Watch has called on the Canadian government to create an Ombudsperson’s office to handle human rights abuses at Canadian mining operations overseas. There is an international convention called the ‘Voluntary Principles on Security and Human Rights’ for extractive companies, but it lacks teeth. Companies decide what to report and there is no enforcement mechanism. Barrick and Glencore are both proud members.

As the problem deepens, rights defenders are now becoming victims. Jennifer Moore, a member of Mining Watch Canada, was detained in Peru this April with John Dougherty, a US journalist, for showing ‘Hudbay’s Hoax’, a film critical of a Toronto-based company.

They were released after four hours and left the country on advice from their legal counsel. A few days later, the Peruvian government issued a statement banning them from returning. They were accused of working on tourist visas (even though the film screenings were free) and ‘altering public order’ – a serious offence in Peru. Human rights lawyers called their detention ‘illegal’ and a violation of the right to freedom of speech.

Governments and companies seem to have forgotten the basic principle behind public law enforcement: in order for it to be fair and impartial, officers cannot be paid by private companies to protect their own interests. Until this is understood, the list of abuses will continue to grow. n

Stephanie Boyd is a Canadian filmmaker and journalist who has been living and working in Peru for 20 years.

Deliver us from Venus and Mars
On the trail of Che