Deliver us from Venus and Mars

Newspapers love to dish up stories of inherent differences between the sexes because we lap them up. Gavin Evans reflects on why we are still so susceptible. 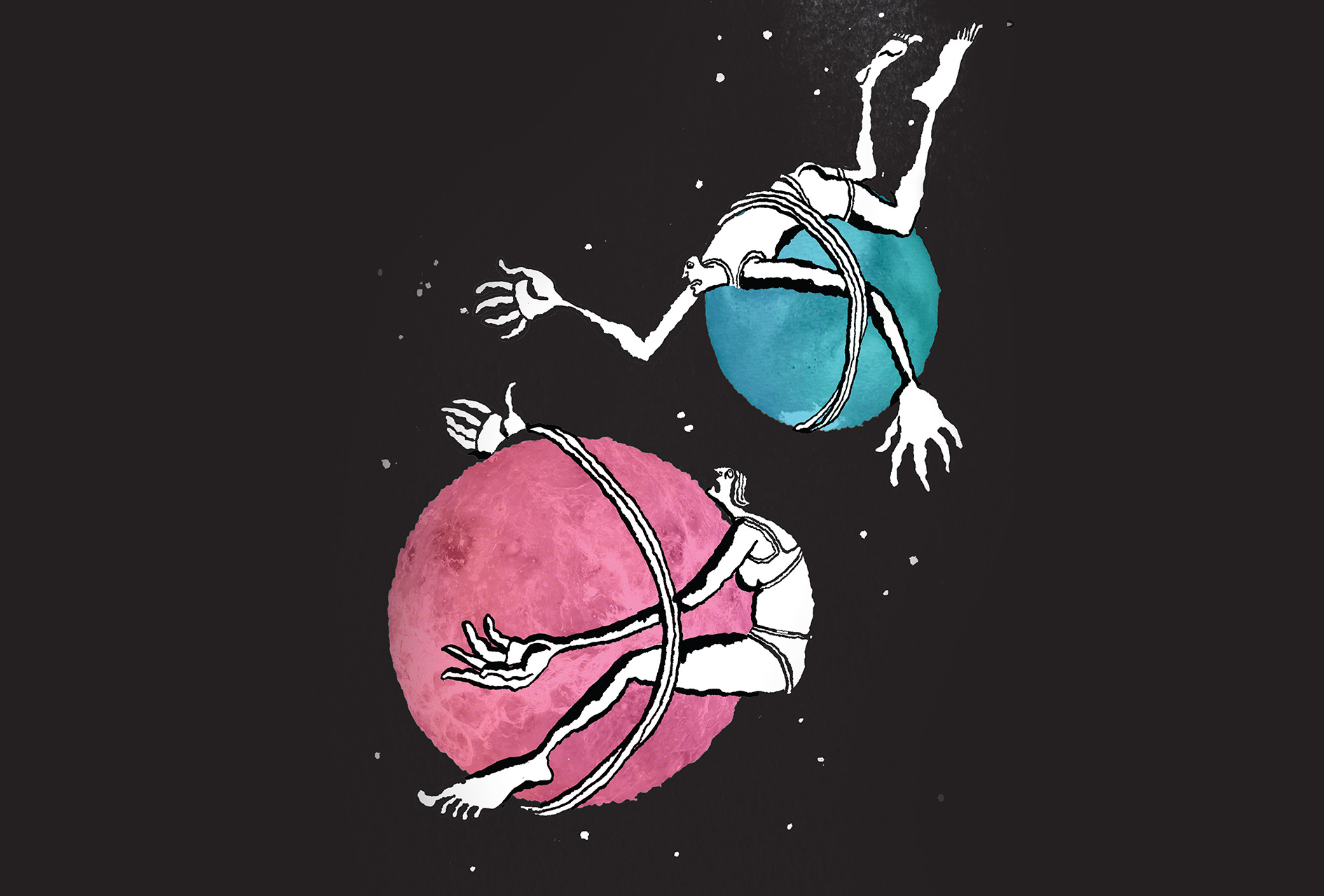 I was at a dinner party recently when that hoary old topic of loquacious women and laconic men popped up. ‘It’s a known fact: ladies are chattier,’ insisted a businessman who fancied himself as one of nature’s realists. ‘There’s actually a major international study which found that women use three times as many words as men.’

Actually, there’s no such study – and this was one of those rare cases where evidence to the contrary convinced everyone who heard it, including the original claimant, Californian psychiatrist Louann Brizendine. She had announced in 2006 that men use 7,000 words a day, women 20,000 – a much-quoted nugget highlighted on the jacket of her best-seller The Female Brain.

The University of Pennsylvania linguistics professor, Mark Liberman, got to work on the claim, and found Brizendine had gleaned it from a self-help book, which lifted it from another and so on, with the numbers changing along the way. Confronted with this, Brizendine admitted she was ‘perpetuating a myth’.

Proof arrived soon after, in the form of a marathon study conducted by three leading American universities. They attached digital microphones to 396 US and Mexican students, recording conversational snippets without the volunteers knowing when they were on or off. Both men and women averaged 16,000 words a day. ‘Whatever people might think,’ said one of the researchers, Professor Jamie Pennebaker, ‘the stereotype is wrong.’

And yet the vive la difference claim garnered far more publicity than this conclusive study, and still circulates a decade on – as invariably occurs.

Pretty in pink – or blue?

This happens even when the gendered contention is promptly discredited, as when a team from the University of Newcastle decided that sex-based colour preference was ‘hard-wired’. They showed pairs of colours to volunteers, asking them to select those they preferred by clicking a computer mouse. The favourite colour of both men and women was blue, but their hypothesis was borne out when it came to pink: women showed more of a preference.

The evolutionary psychologists put on their retrospective thinking caps, which took them back to the African savannah when ‘women were the primary gatherers and would have benefited from an ability to home in on ripe, red fruits,’ as team head Anya Hurlbert put it. How this created a preference for pink is anyone’s guess.

‘Pink, being a more decided and stronger colour, is more suitable for the boy, while blue, which is more delicate and dainty, is prettier for the girl’ – British Ladies’ Home Journal, 1918

Still, the results were uncritically embraced by much of the world’s media. Time magazine announced that ‘women may be biologically programmed to prefer pink’ while The Times ran with the heading, ‘At last science discovers why blue is for boys but girls really do prefer pink’ and went on to note that this related to ‘some deep-seated evolutionary instinct’.

In this case the remedy arrived a week later when Dr Ben Goldacre ripped the study’s logic to shreds in his Bad Science column in The Guardian (though the antidote drew far fewer column lines than the bane). One of his quibbles was that the test measured preference rather than the potentially useful ability to discriminate between shades of red. But the clincher came from evidence that female fondness for pink only gelled over the last 75 years through advertising campaigns – before then it was often considered a boyish colour. For example, the American Sunday Sentinal advised in 1914: ‘Use pink for a boy and blue for a girl, if you are a follower of convention’. Likewise, the British Ladies’ Home Journal told readers in 1918 that the ‘generally accepted rule’ was pink for boys, blue for girls. ‘The reason is that pink, being a more decided and stronger colour, is more suitable for the boy, while blue, which is more delicate and dainty, is prettier for the girl.’

Correlation is not causation

But many gendered claims are harder to dismiss in a few caustic lines. That is because the counter-argument requires readers to understand that correlation does not imply causation.

Take, for example, the notion that women have a ‘shopping gene’, which was given academic legs a few years ago when a University of Michigan evolutionary psychologist, Daniel Kruger, co-wrote a paper arguing that the inclination of women to shop was ‘influenced by sexually divergent adaptations for gathering and hunting’.

Aside from its dubious biological and anthropological premises, and its repetition of the myth that women evolved to be ‘more sensitive’ to pinks, its key logical flaw was that it failed to consider whether any independent variables might be behind female shopping proclivity. The obvious candidate is a culture where women do more of the household shopping, on average, and are prodded by advertising, parents and peers to worry a great deal about how they look, which prompts interest in clothes and cosmetics.

Yet much of the media embraced this paper uncritically. The Hindu went with ‘Genes dictate shopping styles’; ABC News chose ‘Why women love to shop and men don’t: blame evolution’; Psychology Today led with ‘Shopping brings out our inner hunter/gatherer’ and the Toronto Sun settled on the magnificent ‘What else can you expect from a caveman?’.

The need to consider alternative explanations is even more pertinent when it comes to studies involving self-reporting. In 2012 several publications ran stories on a University of Manchester paper entitled ‘The distance between Mars and Venus: Measuring global sex differences in personality’, which concluded that men and women share only 10 per cent of personality traits. ‘Psychologically, men and women are almost a different species,’ said one of its co-authors, evolutionary psychologist Paul Irwing.

The paper was based on a two-decade old US survey that asked questions on personality traits. The obvious point to note is that we are inclined to rate ourselves highly in qualities we admire. Men know dominance and self-reliance are considered manly and therefore rate themselves highly in these areas; likewise women rate themselves in ‘feminine’ qualities like sensitivity and warmth.

The most interesting conclusion that could be drawn from the data is that they reflected attitudes of some Americans about themselves in the early 1990s, and yet the mainstream media went with the researchers’ assumption of profound difference. The relatively restrained CBS News headline announced: ‘Sex and personality differences underestimated: divide between male and female characteristics great, researchers say’. The Daily Mail’s was rather livelier: ‘Surprise! Men and women really ARE different: Sexes share just 10 per cent of their personality traits’. The intro in The Telegraph began: ‘Men and women really do have fundamentally different characteristics, according to a study which has confirmed many long-held gender stereotypes.’

Pathway to your brain

The colour-coded conclusions drawn from brain studies – that show that men and women use different neural pathways – are perhaps the trickiest of all to dispute, at least in the single soundbites favoured by much of the media. Yet left-handed and right-handed people also use different neural pathways, as do big-headed and small-headed people, a fact that is far less widely known. As neuroscientist Gina Rippon put it: ‘If you got a whole lot of brains and divided them by sex, you’d find some differences; but if you divided them by size you’d find substantially more.’

Three years ago, psychologists at the University of Pennsylvania measured the ‘connectivity’ of nearly 100 regions of the brain and came up with what they called ‘typical’ male and female brains (while acknowledging that some female brains connected in the male way and vice versa). They concluded that these differences in connectivity prompted behavioural distinctions, claiming that ‘males have better motor and spatial abilities, whereas females have superior memory and social cognition skills’.

In fact, several studies have shown that male spatial superiority only emerges in the teen years, and disappears in tests where females are told that there is no innate difference. And there is no convincing evidence of innate female superiority in memory, multitasking and social cognition.

If we start from the opposite assumption – that male and female potential in these zones is similar – then we’ll reach the opposite conclusion on differences in brain ‘connectivity’: the fact that men and women may use different neural pathways has little implication for behaviour (as with people who are left-handed or have bigger heads).

But yet again, the voices of scientific exasperation were drowned out by those of the paper’s authors. The LA Times went with: ‘Brains of women and men show strong hard-wired differences’. The Independent announced: ‘The difference between male and female brains could explain why men are better at map reading’. And BBC Radio 5 News told its listeners: ‘It has now been proved that men really do come from Mars and women from Venus.’

Each year, hundreds of research projects show no sex disparities and very few make it into press releases – because similarity is less sexy than difference

So why do the media respond with such enthusiasm to claims of gender contrast while ignoring evidence of similarity? Initially, I suspected it related to the sexist agendas of conservative newspapers but content analysis suggested it was less clear-cut – liberal papers were no less inclined.

The reasons are more complex. Each year, hundreds of research projects show no sex disparities and very few make it into press releases – because similarity is less sexy than difference. Much of the research on supposed differences comes from evolutionary psychologists preoccupied with gender distinctions, which is why their findings are punted by university press offices and embraced by news editors, who lap up softer lifestyle-related reports to balance their pages.

One reason they do so is that readers like to see their own preferences reflected back to them in faux-scientific terms. Despite the reality of women’s advance, or perhaps because of it, many readers are comforted by reports that stress gender gaps. So it is that stories carrying gene-based claims that, say, women evolved to shop or men are too single-minded to multi-task, are reassuringly popular. Those showing no difference or debunking claims of difference are seen as boring and even threatening.

Which brings me back to the businessman I mentioned at the start. When he clocked me rolling my eyes at his ‘chatty ladies’ claim, he glared my way and felt compelled to add: ‘It’s just political correctness to pretend otherwise.’

Education otherwise
When the police are paid by the mine