Praise, blame and all points in between? Your feedback published in the April 2018 magazine. 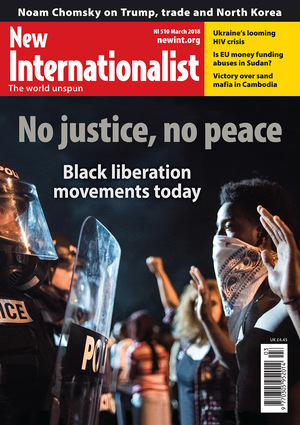 This regards a small but I feel important and often overlooked issue – representing data correctly. Statistics are difficult to understand or visualize for the most of us and graphics are supposed to help convey their meaning clearly and accurately.

In ‘Black Lives: The Facts’ (NI 510) the graphic of nine black men and one white man behind bars is used to illustrate the fact that if you are a young black man in the UK you are nine times more likely to be locked up [the text refers to ‘people’ rather than ‘men’ – ed]. However, the graphic seems to show an end result – that for every one white man there are nine black men in jail.

But we are talking about the relative risk of an individual going to prison and the graphics to convey this would not be so simple. In fact, for this sort of data a whole page would be required to explain relative risk visually!

I opened NI 509 suitably shocked at the ‘enforced “cure” for homosexuality’ headlined on the front cover.

It appears whoever produced that headline had either not read the article or was intent on putting across their own views about China, at the expense of accuracy.

Whereas the headline suggests draconian state intervention, the article suggests that the authorities might not be diligent in holding private organizations to account, but sets out the progressive changes in background legislation which have been introduced in recent times.

Please do not get the idea that I in any way wish to promote a benign view of the Chinese Communist Party, but I do believe NI should be scrupulously honest in its reporting.

With Alaska’s temperatures soaring 22° Celsius above normal in February, Alasdair Livingston’s theory (Letters, NI 509) about ‘a temperature increase of 5-6° C’ being ‘unwarranted hyperbole’ ironically confirms his conclusion that ‘time will tell’.

Alas the banal buzzword phrases in his letter reveal a Murdoch press propagandist, and are a sorry reminder of just how wilfully ignorant, uninformed and/or easily led are those who believe that everything they read in his newspapers about climate change, coal or renewables is true.

From the ‘1.3%’ CO2 emissions furphy to the never-mentioned subsidies still given to coal (which far outstrip those for ‘heavily subsidized’ renewables) to the preposterous ‘Adani coal for poor Indians’ tarradiddle, it really can be a constant stream of fairy tales in our local tabloids – so no more in New Internationalist please, as it will only encourage them!

Everyone is entitled to their own opinion, but not their own facts; and with facts and global warming denial mutually exclusive, let’s keep your opinion pages free from what is little more than a cult of impenetrable ignorance.

Richard Swift has written a vague, sentimental Guest Editor’s Letter (NI 508), in which he mentions some people of his own invention that he refers to as ‘the determined but normally gentle Catalans’.

Such lazy, specious writing does no-one any favours and can only reflect badly on the avowed sincerity of your magazine’s mission.

Against shithole nationalism
Letter from Marabá: Toxic promises
Back