Our bodies, our rights

According to the UN, most surgeries on intersex babies amount to torture. And yet that is the practice in almost every country in the world today. Valentino Vecchietti calls for urgent change. 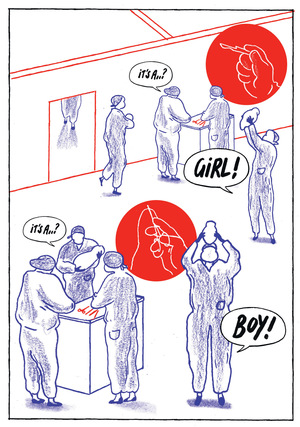 Illustration from In-Out: Gender Through the Brexit Lens, a comic by Valentino Vecchietti, illustrated by Aindri Chakraborty

I’m an intersex human rights campaigner, academic, and writer based in Britain. Key rights we are seeking to gain worldwide include the right to bodily integrity, bodily autonomy and self-determination.

When an infant is born with variations of sex characteristics, they face grave human rights abuses with non-essential, non-consensual, genital surgeries being performed to render their intersex characteristics invisible.

The majority of these surgeries are performed in the name of social acceptance, and not for health reasons. The UN describes this practice as torture. The only country to make it illegal is Malta, which since 2015 protects intersex children from non-consensual cosmetic medical interventions. Although some other countries have sought to provide protections, these have been overturned, as in the case of Chile and Colombia, or have stopped short of providing legislation to protect infants and children from surgeries.

There are an estimated 129 million intersex people in the world – or 1.7 per cent of the global population of 7.6 billion. Intersex variations are biological variations in sex characteristics relating to: genitals, hormones, gonads, and/or chromosome patterns that do not fit typical definitions of ‘male’ or ‘female’.

Many distinct variations of sex characteristics exist: Congenital Adrenal Hyperplasia (CAH), Androgen Insensitivity Syndrome (AIS), Turner’s Syndrome, Klinefelter Syndrome, Hyperspadias, among others. They have always occurred naturally and the majority do not require any medical intervention. But as is evident from the names assigned, they are heavily pathologized by the medical profession. The choice of nomenclature implies we have syndromes that need medical intervention, that need to be fixed.

Often these surgeries are called ‘normalizing’ or ‘corrective’. There is an emphasis on ensuring that intersex children conform to heterosexual feminine or masculine behaviour that matches the sex assignments that have been surgically given to them. Doctors advise parents to maintain secrecy and silence, which creates shame among intersex people and their families. It prevents intersex people from breaking free of social stigma. While the public remain unaware of our existence, they cannot support our cause; and parents cannot make truly informed decisions regarding their intersex child’s medical care.

Consequently, intersex people are excluded from protections and rights given to other vulnerable minority groups. Money set aside by governments and government-funded organizations to help minority groups is not allocated to intersex groups because we are not recognized as a minority that needs funding. Without public support the law will not defend us because the law upholds social norms; and although intersex is a biological norm it is not a social norm, and cannot become one while people don’t know about us or our cause.

‘I needed to connect’

I was born with an intersex variation, but I was not told until I was in my thirties. It took me a long while to overcome my sense of taboo about this and to talk to my friends about being intersex. My activism began because I wanted to find out more about what intersex means, and I needed to connect with other intersex people to find community. This was very hard to find, not because we are incredibly rare, but because hardly any internet sites support or include intersex people. Initially, I searched large websites with reputations for including minorities, but found that intersex people were not included.

Much of my activism is aimed at increasing public awareness. When I speak in public, I often find that people either don’t know what intersex is, or think it is the same as transgender. I explain that transgender is related to a person’s inner sense of gender identity, but intersex is a physical variation in sex characteristics that people are born with. Our populations intersect, but we are distinct.

Writing from Mexico, Hana Aoi says that through connecting with support groups in Latin America she found: ‘There are many people like me, who have been subjected to unnecessary surgeries just so that our sex characteristics conform to a notion based on prejudice about human sexuality.’

Highlighting the damage done by society’s expectations, she says: ‘In Mexico, not all intersex people are diagnosed and subjected to medical interventions. The common experience is, in fact, to have grown up feeling alien in a society that values the existence of an unquestionable binary gender order, which still naively expects the biological markers of sex to be well determined, and to define an expected social and sexual behaviour.’

Ale, from Santiago, Chile, wants to add their voice to the growing number of intersex people who speak out about their treatment. Ale says that as a result of repeated non-consensual unnecessary operations during their childhood, ‘I spent much of my life sad and in pain.’ Ale was sent to a psychologist who, ‘tried to force my behaviour – considered masculine – to become behaviour considered feminine. For many years I had to pretend and adapt my behaviour to what psychologists expected of me.’

I am part of a campaign in Britain to include the ‘I’ after the ’T’ for LGBTI. As with all populations, intersex existence intersects with race, class, sexuality, gender identity, and more. We can be straight, lesbian, gay or trans. Allying with LGBT organizations could be helpful in countries where they are linked into support mechanisms, funding pathways, and strategies for successful public awareness-raising campaigns.

However, it would not work in a country like Russia, where there is violent homophobia against LGBT people. Rather than increasing support for intersex rights, it could result in more prejudice towards intersex people.

Irene Kuzemko, co-founder of Intersex Russia, says, ‘We have to be careful about publicly associating with LGBT.’ In response to the current social stigma and prejudice that exists towards intersex people, Irene says: ‘I’m proud to be intersex, I’m not ashamed of it, and I don’t regret it. Intersex is not a medical problem, it is a human rights problem. The UN Parliamentary Assembly of the Council of Europe, Amnesty International, Human Rights Watch, and many more are on our side.’

‘I’m proud to be intersex. I’m not ashamed of it, and I don’t regret it’

What is to be done?

Across the world intersex people experience similar abuses. Anecdotal reports (see for example Jane Czyzselska’s ‘Born This Way’, 2016) reveal that up into the 1960s infants born in Britain with visible variations of sex characteristics were sometimes left to die. In some countries formerly colonized by European nations, the legacy of this practice remains. And where Western medicine has extended into the Global South, it has brought harmful, medical practices enacted upon intersex infants and children. The African Intersex Movement, comprised of organizations from seven countries, is calling for a worldwide ‘depathologization of variations of sex characteristics in medical practice, guidelines, protocols and classifications’ – including the WHO’s International Classifications of Diseases.

Intersex groups from around the world repeatedly call for the removal of sex category markers on birth certificates and identification documents for all citizens. I support this and believe that gender markers for equality purposes could be recorded elsewhere. Sex does not need to be a legal category. Intersex Human Rights Australia’s submission on birth certificate reform in Queensland calls for an end to legal classification by sex and gender.

Documenting and sharing the work of intersex movements around the world is vital. The Intersex Day Project brought together intersex groups from 14 different Asian countries and published a statement saying: ‘We live in a society that perpetuates discrimination, violence and killing of intersex people by a number of cultural, religious, traditional and medical beliefs and practices. Therefore, we must be supported to be the drivers of social, political and legislative changes that concern us.’

And finally, there is the issue of funding – or the lack of it. It’s a worldwide problem. The State of Intersex Organizing Report of 2017 concludes that ‘intersex groups are deeply under-resourced and continue to be neglected by international funders’. Almost half surveyed receive no external funding; roughly three-quarters report members needing support in healing from trauma and preventing burnout; and fewer than one in five groups have full-time paid staff.

Valentino Vecchietti works with universities on projects relating to intersex human rights and provides consultation in the arts. With psychotherapist Jane Czyzselska, they provide seminars and workshops for therapists working with intersex clients.

What rape tells us about society
‘This is not a life’