Alex Sager imagines a time when all people are free to move. 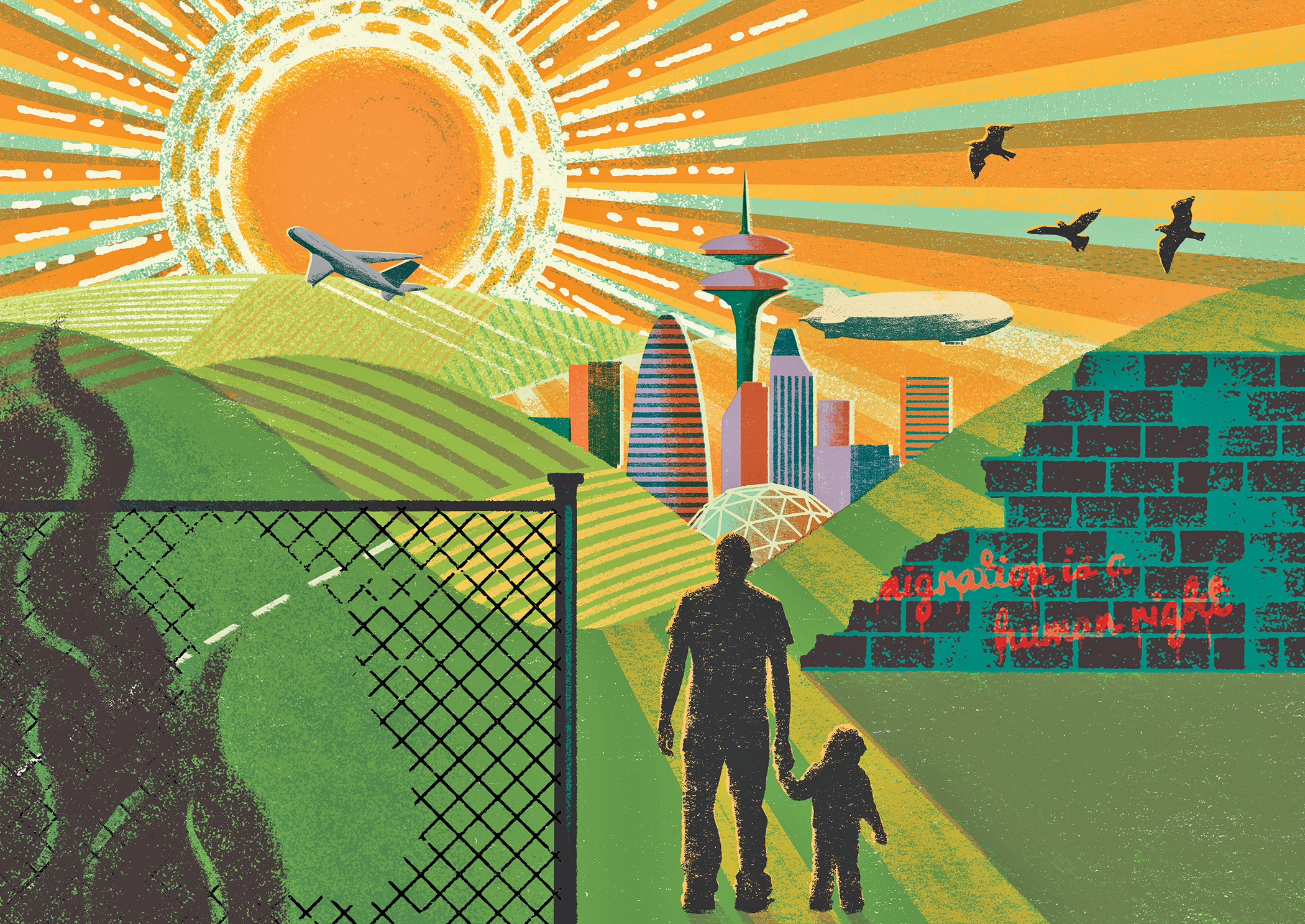 Amouk Majok, the United Nations High Commissioner for Human Mobility, approaches the podium at the end of her open-borders tour. The trip has taken her from Geneva to Lesvos, Melilla, Johannesburg and El Paso. Now, jetlagged and exhausted, she gauges the crowd at Nauru’s Museum of the Migrant. They are mostly international journalists, a handful of mid-level foreign policy dignitaries, and a group of Australian school children accompanying their Prime Minister, Yao Chung.

The man sitting on the podium to Amouk’s right is the human rights activist Ibrahim al-Attar, who, as a boy, spent a year in the Nauru detention centre. He is there to acknowledge Prime Minister Chung’s official apology for intercepting boats carrying refugees and for placing migrants in offshore camps.

Amouk had spent the last half-decade spearheading the reorganization and rebranding of the UN High Commissioner for Refugees (UNHCR), the organization she served from 2020 until its official dissolution in 2048. The refugee camps – including Bidibidi in Uganda, to which her parents and sister had fled while she was an undergraduate at Oxford – have largely disappeared. Where they still exist, they are temporary sites for people waiting for the UN mobility agency and its partners to connect them with local organizations to assist with their travel and settlement.

She had passed the morning touring Nauru’s Museum of the Migrant. At the behest of the international coalition of governments that funded its construction, the curators had muted the horrors of immigration enforcement. Architect Faisal Khan’s proposal for an open-air structure built from the world’s border walls was rejected for a middling, brutalist monument and a story of moral progress. The exhibition downplayed worldwide grassroots migrant protests, instead elevating a few charismatic leaders. Non-profit organizations, supreme courts, and politicians received too much credit.

Nonetheless, an attentive spectator could not fail to notice undercurrents that the triumphalist open-borders narrative would prefer to play down. In a small section dedicated to the Nauru detention centre, there is a photo of men and boys who had sewn their lips shut in protest. It’s a dark reminder that the primary ‘solution’ to people fleeing violence used to be containment, sometimes for generations. Until recently, thousands of people drowned in the Mediterranean and died in deserts. Millions of migrants languished in prisons, lining the pockets of militia and corporations.

It was hard to fathom how much the world had changed in the past 30 years. When Amouk joined UNHCR in 2020, no-one would have predicted open borders. Far-right governments – historians still debated whether they were properly labelled ‘populist’ or ‘fascist’ – dominated the United States, India, Brazil, the Philippines and many European states. Some time after, the United Kingdom finally ‘Brexited’ from the European Union in a spectacle that alternated between tragicomedy and farce. Concrete and barbed wire traversed national frontiers, allegedly to keep out refugees. Mostly, it was political theatre for nativists.

What so many analysts missed during the 2020s was that it was also an era of mass protests against neoliberalism and against white supremacy. The mainstream media largely dismissed worldwide resistance to the Far Right, portraying protesters as anarchists or rioters. But as people took to the street against neoliberal austerity, they found themselves marching in solidarity with migrants under banners of No-one is Illegal. On 14 July 2025, the migrant collective the Gilets Noirs led an occupation of the Palais du Luxembourg, holding out for 93 days until France agreed to a nationwide regularization programme. Movements around the world took notice.

Mostly, though, the 2020s ushered in even harsher immigration policies. Governments responded by filling more prison cells with migrants. They offshored enforcement to more regions unconcerned about even the appearance of human rights. Prosecutors criminalized activists, then moved on to their families, prosecuting those who offered shelter or money to their children, parents or cousins. The backlog of immigration cases in the courts grew from years to decades. Eventually, legislation forbidding prosecutorial discretion overwhelmed the capacity to confine illegalized immigrants and their allies. Enforcement agents were mostly reduced to handing out appearance notices for court dates, often set over a decade in the future.

All of this was compounded by the wave of floods and droughts in the early 2030s that displaced millions of people. Most climate migrants remained within their states, relocating to urban centres or to domestic refugee camps. Others found only destitution and rejection in their countries and continued onward. Immigration budgets spiralled as a global recession eradicated what was left of the middle class. Only then did the movement to tear down the border walls, erected at the turn of the 21st century, start in earnest.

It was the revolution in values that really made open borders possible. Many saw the 2030 International Migrants Day #I am a migrant campaign as a turning point. After Hurricane Susanoo destroyed Beyoncé’s main New Orleans residence, forcing her family to relocate to Bel Air, she came out and self-identified as a migrant. Commentators ridiculed her at first. Didn’t she understand that you couldn’t be a migrant in your own country?

It didn’t help that when Susanoo struck Louisiana, Beyoncé had been at the Met in New York, raising money for her senatorial campaign. Still, Beyoncé’s words resonated with the tens of millions of climate migrants who left the devastated towns and cities of Florida, Texas, Louisiana, Alabama and Georgia. More and more people adopted the slogan #I am a migrant and politicians increasingly found themselves obliged to highlight their immigrant past.

After Hurricane Susanoo destroyed Beyoncé’s main New Orleans residence, forcing her family to relocate to Bel Air, she came out and self-identified as a migrant

In the wake of mass displacement and the horrors of immigration enforcement, open-borders philosophers and social theorists suddenly found a public. Progressive voters began to entertain the possibility that border controls were incompatible with human freedom and equality. More radically, people began to wonder aloud if the nation-state was a failed experiment, a rampart against human solidarity that privileged imaginary communities over real ones. Transnational solidarity networks between migrant, environmental, socialist, feminist and LGBTQIA+ groups began to experiment with inclusive, localized forms of social organization.

None of this was central to the official, state-centred open-borders narrative that Amouk would recite. Rather than crediting migrants or activists, the official narrative placed Canada at the centre. (Ecuador already had an open-borders policy, but was ignored due to prejudice and Canada’s superior public relations campaign.) During the implementation of the Americas Free Trade Agreement of 2035, Canadian Prime Minister Fatima Chowdhury led the New Democrat majority to unilaterally open its borders to the continent.

The dregs of the Conservative Party and the resurgent Bloc Québécois predicted disaster in an ugly campaign of dog whistles and apocalyptic speeches. Nationalist politicians formed an unprecedented Franco-Anglo alliance and proclaimed that tens, if not hundreds of millions, of desperately poor immigrants would swarm into Canada, steal jobs, commit crimes and bankrupt social services. Repudiating Canada’s official multiculturalism, both parties claimed that the cultural impact for Anglophone and Francophone communities would be devastating.

But when the borders officially opened, immigration surged, then tapered off. Temporary and circular migration increased, with many workers coming during the agricultural and construction seasons. Immigrants who remained found jobs, paid taxes and supported local businesses. Labour unions recruited the new arrivals into their ranks, winning a series of legislative victories among agricultural and service workers.

Since immigrants tended to be younger, they paid more into social services than they took out. Most learned English or French – or both – and sent their children to state schools. Most surprisingly, Canada’s open borders experiment coincided with its economic miracle – in 2037 Canada was one of the few countries in the world that reported growth, in no small part because of its openness.

The rest of the Americas – except for the United States – followed Ecuador and Canada. In the US, the powerful Border Patrol and Immigration and Customs Enforcement Unions led the opposition to open borders, portraying themselves as the face of law and order and – in their official slogan – ‘the last bulwark against barbarism’. But then the FBI caught union leader Raúl Álvarez receiving pay-offs from a private prison industry lobbyist at a Las Vegas party ushering in the 2040s. The libertarian wing of the Republican Reform Party – established after the Republican collapse following the impeachment of Donald Trump in 2020 – allied with House Speaker Alexandria Ocasio-Cortez. Together, they used Álvarez’s disgrace to reorganize Homeland Security, removing immigration from its purview, and disbanding the border enforcement workers’ union.

Amouk leaves these details out of her speech. Instead, she chooses to say a few words about the African Union’s courageous refusal to move forward with the 2044 Gaborone round of trade negotiations unless human mobility was included, and Ocasio-Cortez’s leadership in the bilateral American-European and American-Asia Pacific open-borders treaties. By that time, Japanese and European voters recognized that without migration, they would not be able to care for their ageing populations or replenish their depleted pension funds.

It was a small step for the International Labour Organization to affirm freedom of movement across state borders as a core labour right. In 2045, the General Assembly of the United Nations revised Article 13 of the Declaration of Human Rights from ‘Everyone has the right to freedom of movement and residence within the borders of each state’ to ‘Everyone has the right of freedom to movement and residence in every state.’

Amouk smiles at Ibrahim al-Attar, then turns to her audience.

‘I stand before you today in Nauru’s Museum of the Migrant, in a site of ignominy that has become a beacon of hope. I stand before you as someone who devoted her life to human mobility, but also someone who prided herself on her realism. I am here to celebrate the right to freedom of movement and to acknowledge open borders as a victory for the human spirit. At the same time, I am here also to tell you that much work remains to be done. Too many people need to migrate because they cannot make ends meet at home. Too many others would like to migrate, but do not have the resources.’

She pauses. Today was a day of celebration – timed to mark two years since the last border restriction was lifted – and it was not her place to deny that moment to her audience. But hard experience has taught her that human progress is fragile and the recent years’ triumphs will face setbacks. Now that her tour has ended, the painstaking work of reshaping political and economic institutions will begin. She wonders how the world will have to change to match its newfound freedoms.

Alex Sager is the chair of the Department of Philosophy at Portland State University. His latest book, Against Borders: Why the World Needs Free Movement of People (Off the Fence: Morality, Politics and Society) will be available in February 2020. nin.tl/AgainstBorders