‘This land is beautiful to us’

The soil is dying, the water’s running out, and climate change is rendering the future even more uncertain. Hazel Healy speaks to farmers in Senegal who are ready for a different system. 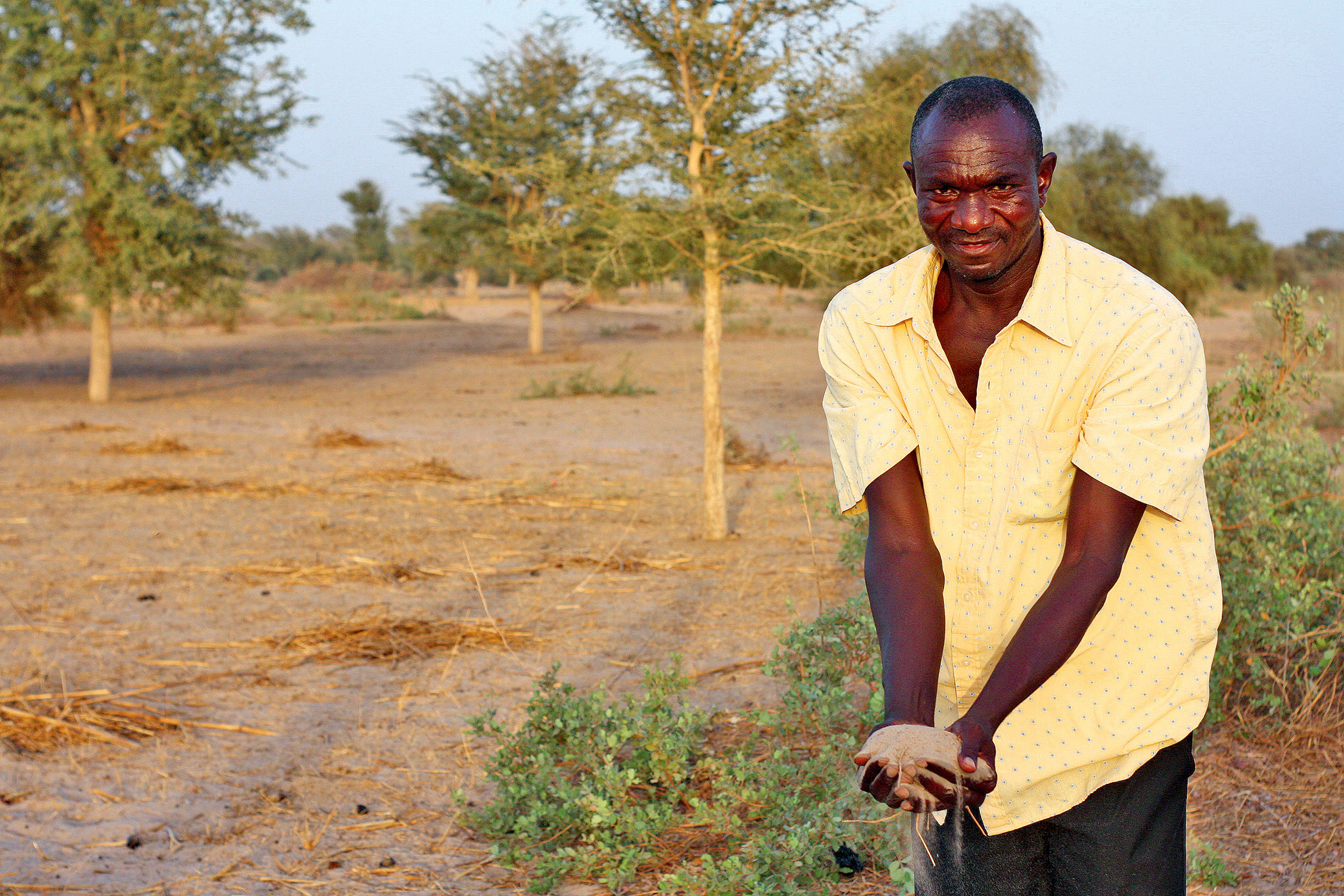 Perfect for peanuts. Oumar Ba is working to restore the sandy soils of the Sahel in Ndiob district, Senegal.
Photo: Hazel Healy/New Internationalist

In the mayor’s office a group of farmers are gathered around dusty desks. At 4.00pm, the heat is still oppressive here in Fatick, a semi-arid region in the Senegalese Sahel. Outside, under a neem tree, people are dozing on woven mats; girls are using the downtime to braid one another’s hair.

Mame Kor Faye, an energetic man in his late fifties, is in full flow, describing the area as he remembers it as a child. ‘Beyond the farms, the forest was dense, full of all kind of species,’ he says. ‘There were buffaloes, hyena, monkeys and jackals. Many trees and flowers.’ The other farmers speak up, incanting like a Greek chorus. ‘We remember, we remember – we were children. Forty years ago…’

‘It’s all gone.’ Mame Kor shuts down the reminiscing. ‘But,’ he explains, ‘we want it back.’

In 2014, the community of Ndiob elected a militant environmentalist mayor, Oumar Ba, with an 80-per-cent majority. He lost no time putting into motion an ambitious plan for full-scale agricultural transformation that will turn the municipality of Ndiob – population 19,000 – into a ‘green, resilient community’. These local farmers are part of his cabinet; they have bought into his vision and in June they gave me a tour of the area to show how they are going to put things right.

It begins with the story of what went wrong.

Ndiob (pronounced ‘Njob’) lies in the central Sahelian band of Senegal, in what’s known as the peanut basin.

The district faces many of the same challenges as the rest of the country and much of sub-Saharan Africa: severe climate hazards, strong population growth of a steady 2.78 per cent per year and degraded soil, water and forests.

But Ndiob’s fortunes were tied to peanuts, Senegal’s most important export. In 1960, in the wake of independence, peanuts were introduced as a major cash crop, used for processing into oil.

‘We were farmers, we knew how to grow to eat – maize, millet, beans and things like that,’ says Mame Kor. ‘The French suggested we grow nuts, they gave us the seeds. They brought machines.’

He points to the deputy mayor, who is also named Oumar Ba. ‘His farm was one of the biggest!’

Oumar acknowledges this with a large smile and picks up the story. ‘We needed more space so we cut down the trees,’ he says.

‘We produced a lot, we made a lot of money at first.’ It was during Senegal’s first president Leopold Senghor’s policy of African socialism, committed to modernizing agriculture. ‘The state bought everything we grew.’

In the mid-1960s Senegal was responsible for nearly a quarter of all global peanut exports. But the dream started to turn sour. France lifted the price support it had been offering under the Lomé Accord. Global tastes in oils changed as soya bean, sunflower and other oils caught on.

In Ndiob, production began to slip. The seeds had been free at first, but now had to be bought. From 1975 onwards yields dropped.

‘Every year the productivity went down,’ says Oumar. ‘We’d used all the land, rotation had stopped because we kept cultivating with fertilizer.’

The community started to see new diseases, such as lung cancer. ‘We didn’t protect ourselves [from the fertilizer]’ says Councillor Ibrahima Faye. ‘We ate the products, and sold them in the market.’

‘Now the population has increased, the forests have disappeared and there is less rain,’ Oumar sums up. ‘We said: enough.’

The millet fields at Ndodji village are reached along soft roads of sand, which run between compounds encircled by rush-mat fencing, through a sparse landscape broken by towering baobabs.

The committee is proud of what was achieved here: increased yields through the introduction of a technique called zai. It’s a traditional method honed and popularized by a Burkinabe farmer called Yacouba Sawadogo which involves planting into deep holes filled with compost.

Through the project, which drew on technical assistance from government agricultural research agency ISRA and Senegalese NGO Endopronat, yields per hectare more than doubled, going up from 300 to 400 kilograms to over 1,000. Within the next three years, the mayor’s team say, the municipality of Ndiob will be self-sufficient in millet.

Soil runs like sand through Oumar’s hands, dispersing in the wind. The land is being prepared now for the next sowing. Arid earth like this needs biomass from rotting matter and the group nods approvingly at piles of millet husks that have been left to compost and frowns at smouldering embers.

These kinds of agroecological methods were shared around all of Ndiob’s 26 villages (see ‘What is agroecology?’). Was everyone into it straight away? ‘It’s been a process,’ Mame Kor says. ‘Some were resistant, others got behind it later. But they are convinced – because they saw the results.’

‘We love this land, it’s beautiful to us,’ says Oumar. ‘We are hardcore farmers.’ But his 40 hectares are not enough to feed an extended family and land is running short. ‘That’s why we have to get more productive.’ Estimated at around 16 million in 2019, Senegal's population is predicted to reach 25 million by 2025. Right now, around 70 per cent of food is imported.

Seasonal hunger is a reality here. Mame Kor says August is the hardest month – the end of the lean season that runs from July to August, when government predicted close to half a million would be food insecure this year. Families help each other when reserves run out. The UN Food and Agriculture Organization (FAO), he says, has provided rice.

Alongside us, there are some nondescript skeletal thorn trees daubed in red paint. Isidore Birama Diouf, a young agro-forester with Endopronat, which supports the work in Ndiob, points this out as Faidherbia Albida, his favourite tree.

The indigenous species of acacia drops its leaves in the rainy season, fertilizing and feeding the crops of millet and peanuts below

This indigenous species of acacia drops its leaves in the rainy season, fertilizing and feeding the crops of millet and peanuts below. Its leaves grow back in the dry season, feeding livestock. It’s part of Ndiob’s programme of ‘naturally assisted regeneration’, trying to protect saplings from burning, being stripped by cattle as they enter the lean season or cut for firewood.

Oumar lifts his arms over the empty land. ‘This will be a forest!’ he announces, spreading his arms wide. More trees will recharge the water table and create microclimates that increase local rainfall. ‘Two, three years from now. You’ll have to come back!’

Out of the maize

Daba Sene, a woman in her fifties, bends to pick a giant watermelon as she lists out all the crops her group has grown over the past four months – aubergines, tomatoes, pumpkins and fruit: melons, guavas and papayas – in a newly minted ‘edible and medicinal garden’ or Tolou Keur.

An initiative of the ASERGMV, the Senegalese arm of the Great Green Wall project – an ambitious plan to halt the expansion of the Sahara – the gardens are an explicit response to the increased hunger prompted by the Covid-19 pandemic, a quest to seek ‘food sovereignty’ over famine.

The mayor of Ndiob has set up three Tolou Keurs and has plans for 20 more. The half-hectare plots blend traditional knowledge with permaculture and agroforestry.

Crops pan out in circles around a central chicken coop, creating a maze effect. A ring of trees like the fast-growing African mahogany, whose deep root system makes it drought resistant, are planted on the outermost edge.

The next layer is filled with fruiting trees like lemons, mangos and coconut palms. Some trees, like the tamarind, are familiar species but new to gardens. They form a wall of protection against the evening wind, which is picking up and blowing hot like a hair dryer.

The inner circles hold plants that can be sold, cooked or used for medicine. Herbs like aloe vera and artemisia, known for its protection against malaria (and according to a recent study – I am told – useful against the effects of Covid-19), along with rosemary, basil and sage.

Chillies, cabbages and pineapples curve in along an inside track, as well as spring onions and lemongrass. The sandy soil is enriched with charcoal, neem and compost to retain water and deter pests and the outer edges are reserved for cereal crops: maize, sorghum and millet.

The all-necessary ingredient, water, is drawn up from a well with a solar pump that powers a drip irrigation system. Some 1,800 plants, 65 shrubs and over 100,000 seeds of grain are provided by the ASERGMV, but the gardens are expected to be self-sufficient in seeds after three years and can provide one tonne of food per month.

Daba is the president of a group of 98 women who farm the plot. She raises her hand in greeting to a small crowd passing on a fast-moving horse-driven cart, bells ringing, who call out in response. She swings the key to the plot of land, announcing satisfied: ‘We like it!’

What happens if the mayor loses office? I ask. Will all this be preserved? ‘We will continue,’ the deputy mayor says firmly. ‘With or without the NGOs,’ he adds.

Ndiob is tiny in the context of farming in Senegal, where almost 65 per cent of arable land is cultivated every year. But the mayor is ambitious. The combination of all Ndiob’s other transformation projects – soap-making to support rural incomes, a solar plant to power three villages and a cold store for crops, more efficient cooking stoves – have won the municipality a fistful of prizes and he made sure to deliver the last one, ‘Best Ecological Community’ from the West Africa Ecology Awards, in person to the Minister of Agriculture.

There are hundreds of agroecology projects in Senegal, run by NGOs, research institutes and universities. They can be fragmented, often small-scale and short-term. But Oumar Ba is one of 30 or so mayors that are pushing for a municipal-led transition to agroecology in Senegal and using government funds to do it.

The national climate is favourable. President Macky Sall has made repeated public commitments to agroecology and, while government support has been dismissed by some as opportunistic and in name only, the FAO and Economic Community of African States (ECOWAS) have privileged Senegal for such projects, and a new coalition of groups, the DyTAES, is pushing for a full-scale, state-backed agroecological transition.

‘With the coalition things are starting to move,’ notes Isidore. ‘Since May, the government is subsidizing organic fertilizer by 10 per cent – this is something new.’

Our tour is ending as the sun dips below the horizon near Oumar’s farm, and rounds of green tea of teeth-melting sweetness are handed out on trays.

Adama Ba, the mayor’s 20-something niece, has joined us and is running her fingers through the soft oblong leaves of the recently planted flamboyant tree, a nitrogen fixer for leguminous crops below. Isidore is on hand to provide its Latin name: Delonix Regia. ‘Its shade is perfect for rest, its fine leaves bring freshness,’ he says.

The youngest of 10 siblings, Adama has a Master’s degree in Rural Economics from the Chiekh Anta Diop University in Dakar. ‘I did what I had to do there. But my home is here. This is my passion; I will use what I’ve learned.’ She’s bucking the rural exodus of the young and wants to set up a project of her own.

Adama shows me pictures on her phone, of a course to turn plastic into parquet flooring and tackle the seas of plastic bags that choke the verges of Senegalese towns, big and small. ‘There is work to be done.’

No more green revolutions
What is agroecology?