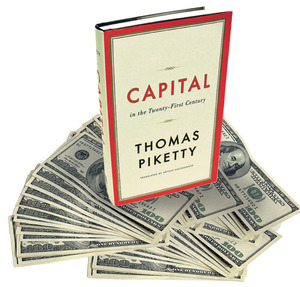 As of this writing, if you go to bookstores in the United States in search of one particularly hot title, you will be told to add your name to the waiting list. The volume is sold out, and getting your hands on a copy will take at least two weeks.

The book is not a bodice-ripper like Fifty Shades of Grey, nor is it the latest in the Game of Thrones series.

Rather, this unlikely bestseller is Capital in the Twenty-First Century, a major work of historical analysis by French economist Thomas Piketty.

As Piketty has toured the US this spring, his work has attracted a level of buzz typically reserved for Miley Cyrus twerking mishaps. This reception is especially unusual because his book punctures one of the favoured myths of mainstream American economics.

Since the 1960s, established wisdom has held that, as capitalist economies mature, they leave behind the ugly disparities of wealth seen in the early days of sweatshops and robber barons. Indeed, in the period following World War Two, when unions were strong and the middle class on the rise, the idea that we might be tending toward greater equality seemed plausible.

Now, wielding several hundred years of tax data like a sledgehammer, Piketty has mercilessly flattened this notion. He shows that any spurts of egalitarianism in the capitalist economy are best understood as freak anomalies.

Between his public lectures, televised interviews, and the countless reviews discussing his work, you need hardly crack Piketty’s nearly 700-page opus to absorb his central line of reasoning: since the rate of return on capital (‘r’) consistently exceeds the growth rate of the economy as a whole (‘g’), those with accumulated wealth are able to get a lot richer a lot quicker than everybody else. Before long, you have entrenched oligarchy.

Of course, many people feel that ‘before long’ has already arrived, and so the professor has struck a nerve. If enthusiasm for his work continues unabated, tattoos of ‘r >g’ – the algebraic expression of his argument – may soon start popping up like Guy Fawkes masks.

Piketty is actually a political moderate. Compared with the blunt force of his empirical analysis, he is almost laughably mild-mannered in his politics, disavowing any radical associations. The fact that he is being labelled a Marxist by the American Right only illustrates how poorly they understand Marx’s thinking. (This is not news; after all, it is a sacrosanct belief in conservative circles that Hillary Clinton must be some form of Trotskyist.)

In truth, Piketty’s work also challenges a favourite tenet of the orthodox Left – namely, that a falling rate of profit within capitalism will contribute to a profound crisis in the system. Even among progressives who do not explicitly expound such crisis theory, there’s a widespread and strangely reassuring feeling that, since market fundamentalism is bound to collapse under its own weight, we don’t actually have to do too much to spur resistance.

There’s just one hitch: we had a crisis, the biggest in three quarters of a century, and yet corporate profits and CEO pay are back to record highs.

Crises alone will not wipe away the injustices of the economy. And Piketty suggests that the growing power of élites will only make future change more difficult. He presents a vision of capitalism plodding forward indefinitely, its class disparities becoming ever more feudal.

If there’s comfort to be found, it’s in the idea that earlier generations have actively – and sometimes effectively – opposed the tendency toward oligarchic rule. Piketty notes that the US, currently the most unequal of the advanced industrial nations he studies, traditionally prided itself on being free of Europe’s inherited aristocracies. It invented steeply progressive taxation and even imposed it on Germany and Japan after the Second World War.

This was not to punish the Germans and the Japanese, observes Piketty. Rather, it was for the good of democracy.

Mark Engler, a senior analyst with Foreign Policy In Focus, is currently writing a book about the evolution of political nonviolence. He can be reached via the website Democracyuprising.com